Several days ago a mainstream policy analyst dropped me a note mentioning that the Russians were claiming to have discovered the existence of a network of biowarfare labs in Ukraine, funded by the American Pentagon and allegedly working with anthrax and plague. Given that much of my focus over the last two years had been on America’s biowarfare program and its possible deployment, he wondered what I thought about the matter.

I’d seen some of the same Russian accusations swirling around the Internet, and hadn’t paid much attention. On the one hand, over the decades America had spent over $100 billion dollars on “biodefense,” the euphemistic term for biowarfare development, and we had the world’s oldest and largest such program, one of the few ever deployed in real life combat. So allocating a few millions or even tens of millions to labs in Ukraine would hardly be implausible.

But on the other hand, even if we hadn’t, the Russians might certainly say we had, with those charges being almost stereotypical examples of the “black propaganda” used by an invading army to justify its attack to the world. Since I don’t read Ukrainian, the documents the Russians claimed to have found would mean nothing to me, and except for zealous partisans on each side, I doubted whether anyone else would be convinced.

However, the situation drastically changed on Tuesday, due to the Congressional testimony of Under Secretary of State Victoria Nuland, chief architect of our Ukraine policy. She seemed not only to acknowledge the existence of those Ukrainian biolabs but was also apparently concerned that their dangerous contents might fall into enemy hands, thereby seeming to completely confirm those shocking Russian accusations. I’ve never regarded Neocons as particularly bright, but the game-ending own-goal she scored on an issue of the greatest international importance may have set a new record for total incompetence.

I was hardly the only person to notice the massive implications of Nuland’s apparent disclosure. Glenn Greenwald ranks as one of the world’s highest-profile journalists, and he quickly released a lengthy column yesterday morning laying out the facts, and noting that our official media fact-checkers had spent a couple of weeks denouncing and ridiculing accusations that now seem to have turned out to be true.

Tucker Carlson devoted his top-rated show on cable to the same issue, emphasizing the shame of having to quote official Russian and Chinese government propagandists on the matter because our own American government officials had been lying.

Tucker Carlson on US biowarfare labs in Ukraine (9 March 2022)

All the facts are not yet in, but at this stage I think we should probably assume that the captured documents provided by the Russians are correct, and our Defense budget was funding the development of deadly biological weapons at Ukrainian labs near the Russian border, including anthrax and plague.

Given that Ukraine ranks as one of Europe’s most corrupt states, word of these projects surely leaked out, and it’s easy to understand why the Russians took a very dim view of it, certainly contributing to their decision to invade. How would America react if a rabidly-hostile Mexican government backed by China were developing deadly bioweapons near the American border?

Naturally, this gigantic story based upon Nuland’s inadvertent disclosure has been totally ignored by America’s mainstream media, but Carlson’s Youtube clip from last night is already approaching a million views, and the facts will continue to spread.

Kevin Barrett quickly arranged an interview with me, and released a short video outlining the story, and setting it in a broader context. In particular, he noted that back in 2017, Russian President Vladimir Putin had raised serious biowarfare concerns about our collection of biological material from ethnic Russians, certainly a very suspicious project for our government to have undertaken.

In any event, I think it was an extremely reckless and foolish thing for the American government to have funded the creation of biowarfare facilities in Ukraine, a country extremely hostile to its nuclear-armed Russian neighbor. 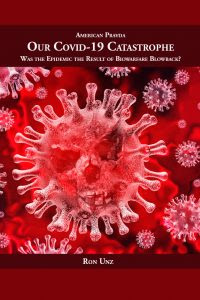 Over the last two years, I have published a lengthy series of articles outlining the strong perhaps even overwhelming evidence that the global Covid epidemic was the result of an American biowarfare attack against China (and Iran), with the articles having been viewed more than 400,000 total times and also collected into a freely downloadable eBook.

The evidence I have accumulated seems rather massive and the only argument anyone has effectively raised on the other side is that even rogue elements of the American government could not possibly have done anything so reckless and foolish. I think that argument seems far weaker today than it did a week ago.

Moreover, last month the New York Times reported on a couple of new scientific papers by our top researchers on the original Covid outbreak in Wuhan. Those findings indicate that the first infection probably occurred in late November or early December, somewhat later than previously believed. Meanwhile, back in April 2020 ABC News reported and Israeli TV confirmed that our Defense Intelligence Agency had produced a secret report “in the second week of November” describing a “potentially cataclysmic” disease outbreak taking place in Wuhan…a report that now appears to have been written before the first Chinese person had even become infected.

I think this inadvertent disclosure by our Intelligence officials falls into the same category as Victoria Nuland’s blunder.

All of this was discussed in three of my video interviews last month, which have now passed 170,000 total views. I suggest that people consider revisiting this material given the new disclosure of our anti-Russian biowarfare activities in Ukraine.