The Deep State has big plans for a very particular demographic among the US citizenry.

Operating in lockstep, the apparatuses of the Deep State intelligence community/military-industrial complex—have set sights squarely on uncooperative “libertarian” elements inside the US.

How precisely are “libertarian extremists” — or whatever buzzword de jour the corporate media has weaponized at the moment — defined? Unsurprisingly, loosely and conveniently, however the Deep State wishes to, with a broad, imaginative brushstroke to sweep up the maximum volume of political opponents possible:

This posturing against “right-wing extremists” (again, simply meaning any individual or group who challenges the dominant neoliberal power structure) is not new in DC rhetoric, but it has intensified dramatically since the so-called “insurrection” of January 6th:

“Former CIA Director John Brennan made the statement that [the] Biden intel community [is] ‘moving in laser-like fashion to try to uncover as much as they can about’ the pro-Trump ‘insurgency’… law enforcement, homeland security, intelligence, and even the defense officials are doing everything possible to root out what seems to be a very very serious and insidious threat to our democracy and our republic.”

The CIA is by no means alone in its efforts – this is a carefully coordinated, tightly choreographed operation spanning multiple federal agencies (the so-called “alphabet boys” for their myriad acronyms), including:

“Attorney General Merrick B. Garland told lawmakers on Tuesday that the Justice Department needs more money for Biden administration priorities including combating domestic extremism.… Mr. Garland has prioritized efforts to fight domestic terrorism and protect civil rights over the department’s focus during the Trump administration on street crime and gangs…
The department is also seeking an additional $101 million to address the rising threat of domestic terrorism.” 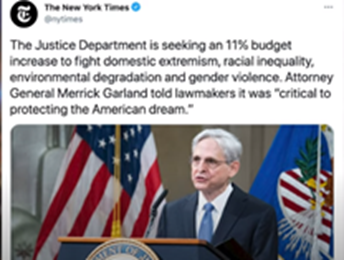 One of the major priorities of the Deep State’s “counter-extremism” operations is disarming the American population. In its plea for more resources for the cause, the DOJ submitted a “request for an additional $232 million to curb gun violence”:

“The additional funding would be used to… support improved background checks and more comprehensive red-flag laws, which allow the police to temporarily confiscate firearms from people who are deemed a danger to themselves or others.”

In a nation whose schoolchildren learned real lessons from history and the tenants of civilized society, none of this would be tolerated. Unfortunately, instead, 21st-century children of American public schools learn about gender pronouns and critical race theory from lobotomized education majors fresh out of their indoctrination camps in the liberal social sciences.

What is afoot is the American Empire crumbling in on itself, the comeuppance of decades of public indifference to immoral foreign occupations, of millions of dead civilians overseas, all in the service of advancing the interests of a tiny globalist elite that benefits from war.

The citizenry did nothing to stop the Iraq or Afghanistan wars, and now the ruling elite’s tools of external control and subjugation of far-away populations have been turned inward.

Consequently, normal Americans – even non-violent, relatively apolitical ones who go to work, love their families, and just want to be left alone — are now in the crosshairs of a murderous, bloodthirsty national security state.

Again, the phenomenon of a government directing its violence onto the population it theoretically exists to protect is not an overnight development.

Since the heyday of the Bush-era neocons’ Orwellian, unwinnable “War on Terror,” civil liberty activists have warned that the siege tactics employed in Iraq, Afghanistan and other immoral foreign wars would inevitably be imported onto US soil for use on the American population.

“This ain’t police work. No, it ain’t. I mean, I can send any fool with a badge and a gun up on them corners and jack a crew and grab vials. But policing? I mean, you call something a war and pretty soon everybody gonna be running around acting like warriors. They gonna be running around on a damn crusade, storming corners, slapping on cuffs, racking up body counts. And when you at war, you need a fucking enemy. And pretty soon, damn near everybody on every corner is your fucking enemy. And soon the neighborhood that you’re supposed to be policing, that’s just occupied territory.”

The new “War on Domestic Terror” waged by the Deep State – aided and abetted by the corporate media —  is not about “liberation” or protecting democracy, just as the previous “War on Terror” at the turn of the century was not about those things in the far-off regions where it was waged.

Instead, what we are witnessing is an unprecedented attempt to assert domination and control over an uncompliant US populace increasingly frustrated with the unrepresentative federalized forces that occupy their land – only this time, the battlefields will be Nebraska and Mississippi, not Fallujah, and the “insurgents” are average Americans, not Iraqis.

When they are met with force, and agents of the repressive federal state killed, as will inevitably occur, it will not be the Nebraska corn farmer who is to blame. Self-defense is an inalienable right of free people everywhere.

Ben Bartee is a Bangkok-based American journalist with opposable thumbs. Contact him via his blog, Armageddon Prose.

Editorial: UChicago Must End Its Booster Mandate—We Are Not Lab Rats