[Editor’s note: The crash took place about 60 miles north of my office on the Duluth Campus of the University of Minnesota, where I was being interviewed by a reporter for an alternative journal. He said, “The black box will tell us what happened”, to which I replied, “There won’t be one!” As I put the pieces together, it became increasingly evident this had been done with a directed-energy device, so I flew my colleague from JFK research, John P. Costella, Ph.D., to assist me. It was winter in Northern Minnesota and we were tramping around in -35°F weather picking up pieces of the wreckage, which would lead to the publication of “The NTSB Failed Wellstone”, FromtheWildnerness Newsletter (6 July 2005), which may be the most copiously documented short paper in history (5 pages with 115 endnote). The proof is devastating.

The Wilderness article prefaces our research with four reviews of American Assassination: The Strange Death of Sen. Paul Wellstone (2004), which I co-authored with Don “Four Arrows” Jacobs, a Native-American scholar then with Northern Arizona University, which has been very well received (no doubt, because we did our homework)! On 16 November 2005, in anticipation of my retirement the following June, a three-part series of lectures on JFK, 9/11 and Wellstone, the third of which is presented here. It was a bitter-sweet occasion, because my wife was supposed to join me but slipped on ice and broke her ankle getting into the car. I learned she had been taken to the hospital just as I was about to speak. Knowing that it could not be rescheduled, I went ahead and joined her later. She has not forgiven me.]

On Oct. 25, 2002, incumbent U.S. Democrat Senator from Minnesota Paul Wellstone was campaigning for a third term when he died in a plane crash. The crash occurred just 11 days before the election, and 58-year-old Wellstone was ahead in the polls.

His seat went to his Republican Party rival, and that tipped the scales for a GOP majority in the U.S. Senate.

Wellstone was one of the last spirited anti-war progressive populists on the scene. He opposed the first Gulf War in 1991 and, in the months before his death, spoke out and voted against the government’s threats to go to war with Iraq again.

The death — or, as we suggest, the assassination — of Wellstone removed a key obstacle for the Crime Syndicate to steamroll yet more tax cuts through for the rich, unending bankers’ wars and a never-seen-before boom for the military/security-industrial complex. Persons like him are now missing in action in the Crime Syndicate takeover of America.

Wellstone had been one of only eight members of the Senate to vote against the repeal of the Glass-Steagall Act in 1999. Just eight days prior to his death, on Oct. 17, the maverick senator introduced the Consumer Shareholder Protection Act (SB 3143) that posed more challenges to banksters.

He opposed the Patriot Act. He was a longtime critic of the CIA and covert operations. He’d been a constant thorn in the side of President George H. W. Bush, who, responding to the junior senator’s uncomfortable questions at a reception asked, “Who is this chickenshit?”

Two weeks before the hit, Wellstone told a group of supporters on the campaign trail that Vice President Dick Cheney had called him into his office and told him to “go along with the program, if you know what’s good for you and Minnesota. Stop sticking your nose into 9/11.” Wellstone intimates say he was asking questions and had serious doubts about the 9/11 narrative [see video Part II below, minute 00:48:42].

Two years earlier while traveling in Colombia, Sen. Wellstone experienced an attempt on his life. A bomb planted en route from the airport was discovered.

Wellstone, a college professor, seemed to also be targeted for being a Jew who wasn’t on board with that narrative. In his first campaign, his opponent was Sen. Rudy Boschwitz, a pro-Israel Jew dubbed the rabbi of the Senate. Seventy-two of his Jewish supremacist supporters signed a letter on campaign stationery to members of the Minnesota Jewish community days before the election accusing Wellstone of being a “bad Jew” for marrying a gentile and not raising his children in the Jewish faith. Wellstone’s only reply, which was widely broadcast on Minnesota television, was “he has a problem with Christians, then.” Boschwitz was the only incumbent U.S. senator not to be re-elected that year. Wellstone defeated the heavily financed Boschwitz again in the 1996 election.

When Sen. Wellstone’s King Air A-100 turbo prop went down at 10:22 a.m. in Minnesota, it also killed seven others who were on board, including his wife, Sheila; one of his three children, Marcia; the two pilots, and campaign staffers Mary McEvoy, Tom Lapic and Will McLaughlin. The airplane was en route to Eveleth, where Wellstone was to attend a funeral.

The FBI was almost too quickly on the scene in the remote town where the plane crashed, and local police were shut out of the scene and investigation. A number of key eyewitness reports (well covered in the documentary below) were left out of the NTSB report. It appears the FBI sanitized the crash site 8 hours before the NTSB arrived on the scene.

The aircraft was flown by two experienced pilots. The plane inexplicably stalled on approach to landing. The national media began the cover up right away, citing bad weather and ice. But that scenario didn’t work, so the NTSB blamed it on the pilots. A major attempt was made to tarnish the pilots, similar to the JFK, Jr. case, to which this has similarities.

Though it was a high profile crash that many in Minnesota were skeptical about, the NTSB couldn’t afford to hold a public hearing. The NTSB spokesperson was former CIA, one Carol Carmody.

The NTSB later determined that the likely cause of the accident was “the flight crew’s failure to maintain adequate airspeed, which led to an aerodynamic stall from which they did not recover.”

The final two radar readings detected that just before the crash the airplane was traveling at or just below its predicted stall speed.

Other pilots reported 3 to 5 miles visibility, no rain and a 900-foot ceiling. Par for the course and with shades of the JFK, Jr. incident, there was no voice recorder or transponder found [see video Part II at minute 00:07:20].

The fuselage was burned to ash, yet the wings where the fuel was stored were largely unscathed. The maximum temperature of aviation fuel in open air is 575 degrees. Fuel produced black smoke, but this smoke was bluish gray, more typical of electrical fires. Metal alloys from the fuselage were completely melted, which would require temperatures several times hotter. The metal remnants were examined and discussed by a University of Minnesota chemistry professor in the documentary below [see Part II, min. 36:22].

The plane seemed to be disabled seven miles from the airport. The King Air A-100 turbo prop flies treetop level over shocked witnesses five miles out. No lights, engines spooling down, so low witnesses are amazed it stays airborne. All who saw it said the pilots didn’t seem to have control. Three more miles and 1.8 miles from the airport, the plane dropped into the woods, killing all eight on board.

The NTBS said the plane was flying at 1,000 feet when over the Allen residence. The ignored Allen family testimony said that it was 75 to 90 feet off the ground. Other eyewitnesses on the ground heard what sounded like five or six rounds of pops or firing [see Part II, min. 00:37:35]. Another eyewitness [Part II, min. 00:00:00] spotted a white van travelling at 70 to 80 mph away from a fire trail near the crash site. 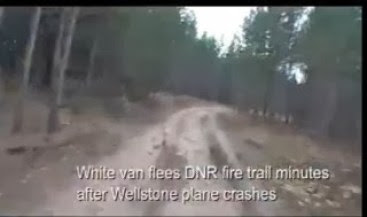 The documentary hypothesizes an electro-magnetic pulse weapon may have fried the electronics of the plane and triggered an explosion in the fuselage on impact [Part II, min. 00:23:50].

Part I: “Wellstone: They Killed Him”

This important documentary has been memory holed on You Tube. It appears blocked in Europe on Bitchute.

You can check here for various country blocks and try and play it. Torchy in the US tells me it spins for about 90 seconds in typical Bitchute fashion, but eventually plays.

9 thoughts on “The Assassination of US Sen. Paul Wellstone, One of the Last Anti-War Populist Progressives”