JEA: Philip Giraldi has done it again. He has essentially fleshed out a reasonable solution to the Israel problem. We all know that Israel is a problem child and that if nothing is done to stop this diabolical entity from bleeding America to death in the Middle East and elsewhere, then America will continue to be buried beneath an avalanche of debt and death of precious souls. Two cheers for Giraldi.

“The rich and powerful have inevitably gone too far and have finally received their comeuppance. Perhaps the ‘gone too far’ moment has finally arrived.”

Critics of U.S. policy with and about Israel like myself have been relatively successful in describing the considerable downside in the bilateral status quo. We have demonstrated that the lopsided relationship supports absolutely no U.S. interest and that, on the contrary, considerable damage is done to the American people, to include involvement in armed conflict in the Middle East which serves no purpose beyond “protecting Israel.”

Israel benefits from billions of U.S. taxpayer dollars annually in a $3.8 billion lump sum for “military aid” plus hundreds of millions more in special procurements and projects that are together considered untouchable in Washington. Add to that the quasi legal “charitable” tax exempt contributions from wealthy American Jews and groups that fuel apartheid policies in Palestine and pay for the illegal settlements. Many of those same groups are themselves tax exempt and they exploit that status to actively lobby on behalf of the Jewish state, successfully shielding it from any consequences for its war crimes and human rights violations. They also avoid registration under the Foreign Agents Registration Act of 1938, even though many of them collude directly with the Israeli government through its embassy in Washington and are directed by the Prime Minister Benjamin Netanyahu government. In fact, no Israel Lobby component among the six hundred or so Jewish groups that have protecting Israel as part of their agenda has ever been required to register as a foreign agent. [Editor’s note: Except for JFK requiring the American Zionist Council, which LBJ rescinded.]

Under President Donald Trump, one Jewish billionaire Sheldon Adelson contributed as much as $300 million to GOP coffers, money which had with it a quid pro quo, that Trump should do a series of favors for Israel, which he did. The Democrats have their own counterpart in Israeli film producer Haim Saban, who has said that he is a “one issue guy and his issue is Israel.” Neither major party can be counted upon to resist Israeli pressure on foreign policy or even on domestic issues that might limit the “aid” that the Jewish state receives.

The money coming from the Israel Lobby has corrupted American government all the way down to the local level and special preferences for Israeli businesses in states like Florida and Virginia have added even more to the cash flow that goes in only one direction. Ironically, Israel does not really need the money. It is a socialist state that has a European level standard of living, to include free health care and university education, benefits that Americans do not possess.

Add to that Israel’s deplorable human rights record, which Washington is required to defend in international fora, as well as Israel’s record of persistent and highly damaging spying against the United States. It all means that little more need to be said, apart from restating the fact that it is a very bad deal for the American people. And it has also brought with it collateral damage to include attacks on fundamental rights like Freedom of Speech and Assembly. As the politicians in both major parties are bribed or otherwise coerced into continuing to behave the way that they do, count on things getting even worse, with criminalizing of any criticism of Israel as anti-Semitism currently making the rounds of pending legislation.

All of that said, when I and others lay out the laundry list of Israel’s crimes against America, some sympathizers inevitably respond: “Okay, so what are you going to do about it?” So now I am going to address some of the things that can be done by ordinary Americans and by groups that are correctly appalled by Washington’s wag the dog relationship with the Jewish state.

First of all, demand from our elected officials that American law be enforced on Israel. There are several areas where that is relevant. First, as mentioned above, is the failure of the Justice and Treasury Departments to enforce registration of pro-Israel lobbying groups. Registration would force groups like the American Israel Public Affairs Committee (AIPAC), the Foundation for Defense of Democracies (FDD), the Washington Institute for Near East Policy (WINEP) and the Jewish Institute for National Security of America (JINSA) to open their books regarding the money they receive and spend and could also require them to reveal details of their lobbying activity.

Another area where the law is not being enforced is regarding Israel’s nuclear arsenal, which was created by stealing both technology and enriched uranium from the U.S. The Symington Amendment on foreign relations forbids giving aid to any country that is either a nuclear proliferator or is in possession of undeclared nuclear weapons. Demand that it be enforced fully now and end all aid to Israel.

U.S. Israel-centric charities or foundations should also have their tax exemptions strictly enforced. Humanitarian aid is fine, but if they are funding the illegal West Bank settlements, which many of them are, they should have their exemptions revoked. And finally, Israelis caught spying or Americans who are assisting in the theft of U.S. classified or sensitive information should be prosecuted to the fullest extent of the law, to include use of the Espionage Act. Currently, such individuals are almost always given a pass. If President Joe Biden can continue the persecution of legitimate journalist Julian Assange under the Espionage Act, he can certainly do the same vis-à-vis Israel’s spies.

Second, call for the end of Citizens United, which enables the Zionist oligarchs to dictate U.S. policy in the Middle East through their PACs and direct political donations. Beyond that, make your voice heard more generally. Sure, calling or writing to a congressional office is most often a waste of time but Capitol Hill staffers have told me many times that if a congressman gets multiple complaints about a certain policy or issue, he or she will begin to pay attention. That is not to say that they will give a damn about their actual constituents versus the powerful Israel Lobby but the background noise might make them just a bit more sensitive on the issue. 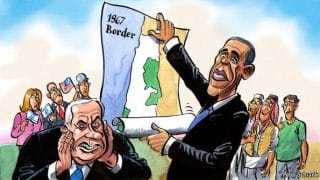 Likewise, with the mainstream media and the entertainment industry, which are Jewish/Israel dominated. When one reads an article or watches a documentary that is heavily slanted towards the Jewish state, make an online comment or write a letter to the editor or producer saying that the bias is evident. As in the case with congress, if newspaper or television editors begin to see a lot of commentary hostile to their spin they just might begin to be more cautious for fear of losing readers, viewers or advertising dollars. And just a little bit of loosening of the Israeli grip in the media will mean that the public will begin to appreciate that the “news stories” that have been promoted for so many years are nothing but a tissue of lies.

Third, support the Boycott, Divestment and Sanction (BDS) movement as well as organizations that are actively critical of Israel. BDS is non-violent and increasingly effective, particularly on college campuses. Always remember that Israel and its friends do not have a grip on Congress, the White House and the media because they are wonderful warm people that others find to be sympathetic. It is difficult even to imagine a scintillating conversation with a malignant toad like former casino magnate Sheldon Adelson or with congressional slime balls like Senators Chuck Schumer and Ben Cardin.

Israel’s ability to corrupt and misdirect is all based on Jewish money, a well-established process whereby Zionist oligarchs buy their way to power and access. So to restore the relationship to something more like the normal interaction between countries the solution is to hit back where it really hurts – boycott Israel and Israeli products or services and do the same for the companies that are the sources of income for those American Jews who are the principal supporters of the Zionist project. If you want to visit Las Vegas, by all means go, but don’t patronize the casinos and hotels now owned by Sheldon Adelson’s Israeli wife Miriam, which include The Venetian and Sands Resort.

Democratic party major donor Haim Saban, meanwhile, is a producer of Hollywood children’s entertainment, including the lucrative Power Rangers. You can stop your children from watching his violent programming and tell the network’s advertisers why you are doing so. And then there are businessmen including Bernard Marcus, who is a co-founder of Home Depot and a major supporter of Israel, and Robert Kraft, owner of the New England Patriots. No one really has to spend $1000 to go to a football game, particularly if the owner is a good friend of Benjamin Netanyahu, and if you need something for your home or are seeking entertainment, choose to spend your dollars somewhere else. Readers can do the homework for the businesses and services that they normally patronize. If outspoken advocates for Israel own the company, take your dollars elsewhere.

Also put direct pressure on the mostly high-tech U.S. companies that invest in Israel, which are particularly vulnerable because they are thereby sending American jobs overseas, particularly as they country they are sending them to will steal the technology as likely as not. Make Israel’s cash-rich supporters pay a price for promotion of an apartheid/racist regime that is contemptuous of Americans even as it robs us blind, in the process doing terrible damage to the United States.

I am confident that readers will come up with other ideas regarding what might be done to counter Israel and all its works right here in the United States. If we lapse into apathy and think that nothing can be done to oppose the Israeli juggernaut, we will all lose. And, to be sure, the Israelis and their friends in America and Europe have one huge weakness. It is their hubris. They think that they are invulnerable because of their money and political power, but they fail to understand that in history the rich and powerful have inevitably gone too far and have finally received their comeuppance. Perhaps the “gone too far” moment has finally arrived.

Jonas E. Alexis has degrees in mathematics and philosophy. He studied education at the graduate level. His main interests include U.S. foreign policy, history of Israel/Palestine conflict, and the history of ideas. He is the author of the new book Zionism vs. the West: How Talmudic Ideology is Undermining Western Culture. He is currently working on a book tentatively titled, Kevin MacDonald’s Abject Failure: A Philosophical and Moral Critique of Evolutionary Psychology, Sociobiology, and White Identity. He teaches mathematics in South Korea. Email: Logoswars1@gmail.com
Please follow and like us:

44 thoughts on “Philip Geraldi, What to do about Israel?”