During an appearance on One America News, Greene said that Trump was ‘doing really well.’

‘I’m excited to go visit him soon and continue to give him a call and talk to him frequently. Great news is, he supports me 100 per cent and I’ve always supported him.’ 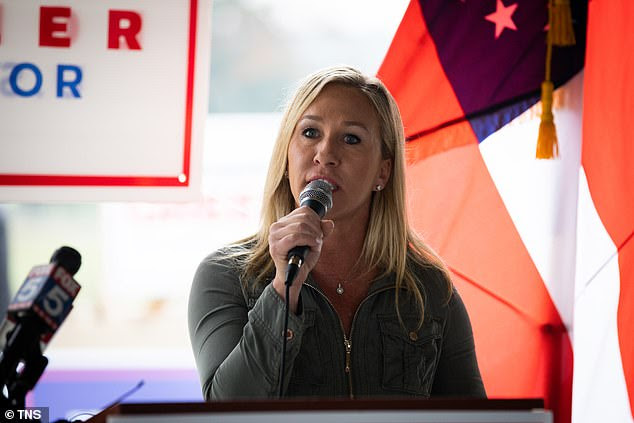 QAnon Rep. Marjorie Taylor Greene said on One America News Monday that she would soon be visiting former President Donald Trump at Mar-a-Lago and also said he backs her ‘100 per cent,’ as Democrats push GOP leadership to remove her from committees 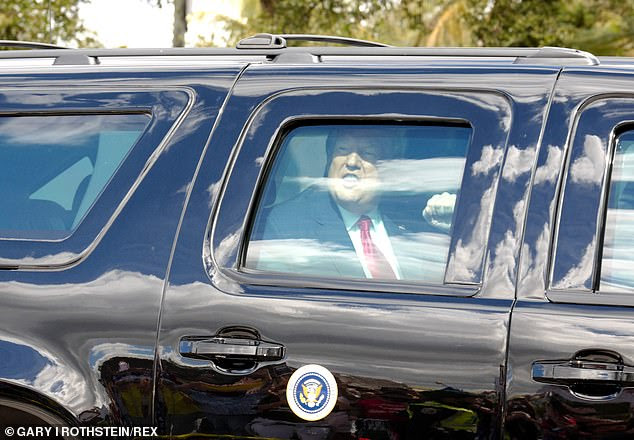 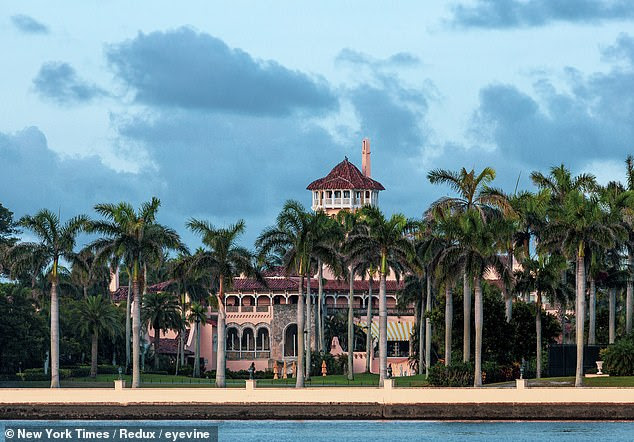 Rep. Marjorie Taylor Greene said Monday that she planned to visit former President Donald Trump at his Mar-a-Lago resort in Palm Beach, Florida, where he’s, so far, spent his post-presidency 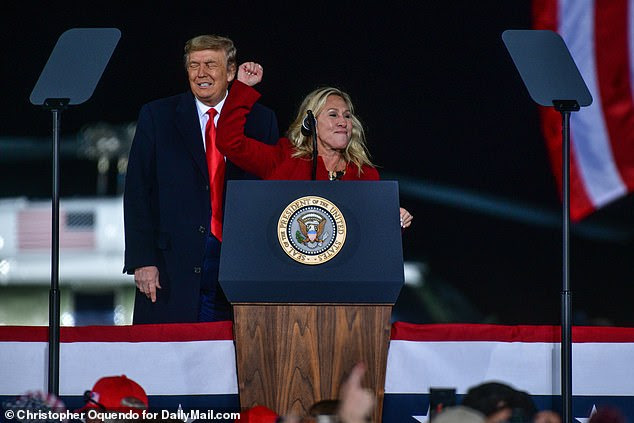 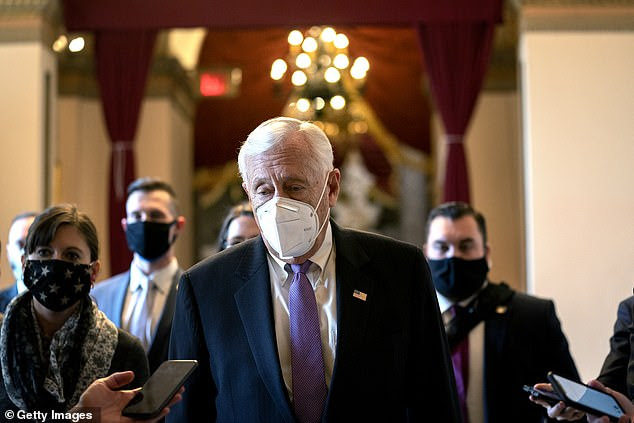 House Majority Leader Steny Hoyer is giving Republicans an ultimatum – to remove Rep. Marjorie Taylor Greene from her committee assignments or else Democrats will take action against her 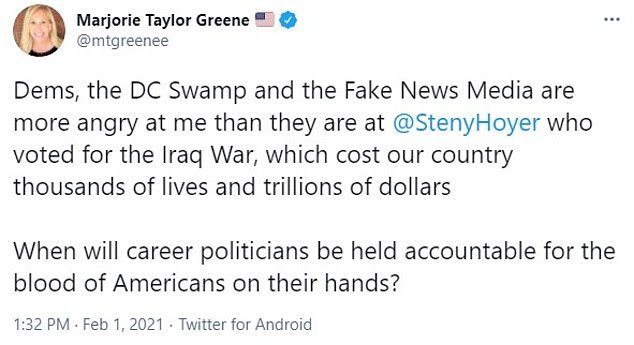 Greene lashed out on Twitter against Hoyer, claiming he should be ‘held accountable’ for backing the war in Iraq

She also said the ‘fake news media’ are targeting her because ‘I am one of you.’

Greene said Saturday she had spoken on the phone with Trump.

‘President Trump is always here for the people, and he’s not going anywhere,’ she continued. ‘So I look forward to, to joining him and what his future plans may be.’

A spokesperson for Trump did not immediately reply to DailyMail.com’s request for comment.

Greene previously appeared alongside Trump at a Dalton, Georgia rally for Republican Sens. Kelly Loeffler and David Perdue on January 4, one day before the GOP candidates lost their run-off races to Democrats.

Greene publicly touting her alliance with Trump comes as Democrats are pursuing options to move her off committees if House Minority Leader Kevin McCarthy doesn’t move forward with reprimanding the Georgia freshman Republican over controversial comments she’s made.

It also comes as Senate minoroty leader Mitch McConnell on Monday denounced the QAnon congresswoman , calling her ‘loony lies’ a ‘cancer for the Republican Party.’

He did specifically named the freshman lawmaker in a three-sentence statement to The Hill, yet referenced several of the bizarre conspiracy theories the far-right Georgia congresswoman has pushed.

‘Somebody who’s suggested that perhaps no airplane hit the Pentagon on 9/11, that horrifying school shootings were pre-staged, and that the Clintons crashed JFK Jr.’s airplane is not living in reality,’ said McConnell.

‘This has nothing to do with the challenges facing American families or the robust debates on substance that can strengthen our party.’

House Majority Leader Steny Hoyer’s ultimatum gives Republicans 72 hours to remove Greene from committees or Democrats will bring the issue to the floor.

‘We’re focused on making sure that we can render powerless the poisonous nature of this member,’ Florida Democratic Rep. Debbie Wasserman Schultz told reporters Monday. ‘The House has to be able to take actions to police its own membership,’

It is not clear the exact path Democrats would take to remove Greene, but party leaders have several options – and Wasserman Schultz on Monday introduced a measure for removal.

During a call on Sunday, Democratic leadership also discussed a separate motion that would go through the House Rules Committee.

McCarthy and Greene are scheduled to meet for a face-to-face sit-down later this week.

Allies claim he will decide how to move forward with the situation depending on how that conversation goes.

The Republican leader had a similar meeting with then-Rep. Steve King in 2019 after the Iowa lawmaker questioned in an interview with the New York Times why the term white nationalism was so offensive.

During that meeting, King showed little remorse, and shortly afterward, McCarthy removed King from his committees.

McCarthy paid a visit to Mar-a-Lago last week in a public display of support for Trump, who was impeached for a second time last month and will be on trial in front of the Senate next week.

Two of the most severe sanctions Democrats can pursue against Greene would be a formal censure and expelling her completely from the House.

In retaliation against Hoyer, Greene took to Twitter Monday to lashed out at the majority leader for supporting the war in Iraq and claiming he also needs to be ‘held accountable.’

‘Dems, the DC Swamp and the Fake News Media are more angry at me than they are at @StenyHoyer who voted for the Iraq War, which cost our country thousands of lives and trillions of dollars,’ Greene tweeted.

‘When will career politicians be held accountable for the blood of Americans on their hands?’ she continued.

She posted in another tweet Monday that she is facing attacks from Democrats and the media because she is a ‘normal person.’ 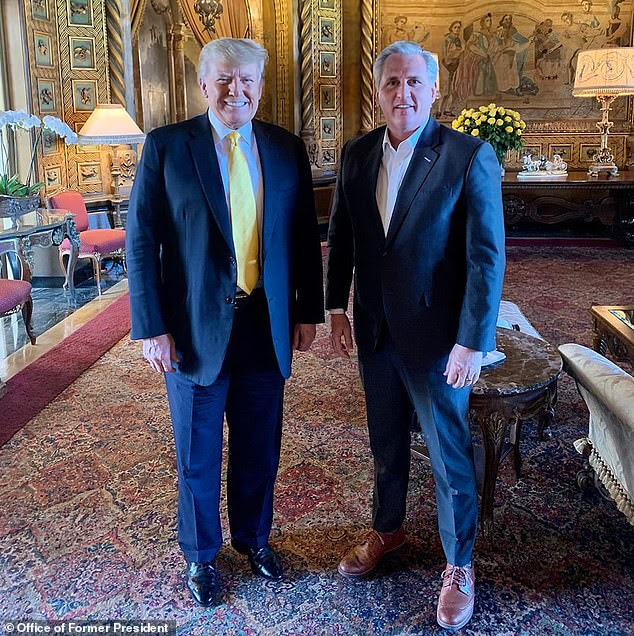 ‘The DC Swamp and the Fake News Media are attacking me because I am not one of them,’ Greene wrote. ‘I am one of you. And they hate me for it.’

Several Democrats, and a growing number of Republicans, are looking for ways to punish Greene after more revelations came out of her pushing QAnon theories and other conspiracies, like calling the Parkland and Sandy Hook school shootings a ‘hoax.’

Greene sits on the House Education and Labor Committee – and, in particular, lawmakers are concerned with this assignment in light of her stance on mass shootings.

She also said in the interview, which was published Monday, that the RNC will ‘stay neutral’ as the 2022 primary campaign ensues.

‘Majorie Taylor Greene is trying to distance herself from those things and there’s going to be an investigation,’ McDaniel said of the freshman Georgia Republican representative. McDaniel said that Rep. Greene is ‘trying to distance herself’ from QAnon conspiracies she pushed in the past

Republican Senator Rob Portman of Ohio (left) said Sunday that his colleagues should ‘stand up’ against Greene, while he and Arkansas Governor Asa Hutchinson (right) said they trust and respect voters in Georgia’s 14th congressional district to election someone to Congress that represents them

‘I trust the voters,’ she told The New York Times in an interview Friday. ‘I have a lot of faith in the voters to pick who’s best to represent them.’

McDaniel, the cousin of Senator Mitt Romney, said the RNC would step in if ‘there’s more egregious things,’ like ‘if there’s a David Duke situation.’

She also said she trusts McCarthy to ‘handle’ Greene.

‘She has said they’re not from her,’ McDaniel said of the QAnon conspiracies Greene subscribes to, like that the government is run by a left-leaning, devil-worshiping cabal of pedophiles and sex traffickers.

‘There does need to be an investigation, and I trust that Kevin McCarthy will handle that within his own caucus,’ she added.

People familiar with McCarthy’s thinking told the Times that he felt crippled by the circumstances surrounding Greene and has expressed that the only way to deal with her is to tolerate her.

‘If you have a family dispute, don’t go on ‘”Jerry Springer,”‘ McDaniel also recommended. ‘Do it behind closed doors.’

‘It’s my role to call them and explain that if we don’t keep our party united and focused on 2022, we will lose. If we are attacking fellow Republicans and cancel culture within our own party, it is not helpful to winning majorities,’ she told The Times.

McDaniel, however, did condemn the QAnon conspiracies pushed by Greene by calling the comments ‘atrocious.’

She said ‘they need to be condemned,’ adding: ‘They are inaccurate. They are very, very dangerous.’

McDaniel said the RNC would remain neutral in the Republican primaries, including in Greene’s reelection in 2022 – as long as no extreme behavior emerges.

Republicans are split over what to do with Greene – who has quickly become arguably the most controversial figure within the party, possibly tied with Trump.

‘I think Republican leaders ought to stand up and say it is totally unacceptable what she has said,’ the Ohio senator told CNN on Sunday morning.

Portman, however, along with Arkansas Governor Asa Hutchinson, also a Republican, said Sunday that voters in Georgia’s 14th district should be respected and trusted to elect someone to Congress who represents their values.

‘The people of her district elected her and that should mean a lot,’ Hutchinson told ABC Sunday, adding that Greene’s constituents would decide if she should serve another term or not.

‘She’s going to run for reelection and she’ll be accountable for what she said and her actions.’

‘Given her history is she fit to serve?’ ABC host Martha Raddatz pushed Hutchinson.

‘I’m not going to answer that question as to whether she’s fit to serve because she believes in something that everybody else does not accept,’ the Arkansas governor dodged.

‘I don’t think we ought to punish people from a disciplinary standpoint – a Party standpoint – because they believe something a little bit different.’

Before being elected to Congress, Greene expressed some extreme and dangerous views, like supporting the calls for House Speaker Nancy Pelosi, among other prominent Democrats, to be executed.

Many lifelong Republicans feel there is no place for this more radical version of Republicanism in the modern-day Party.

Greene appears to be creating a place for herself in the party, however, as she took to Twitter Saturday to defend McCarthy against the conservative anti-Trump political action committee, The Lincoln Project.

The PAC called McCarthy a traitor after pictures emerged last week of him meeting with Trump while in Southern Florida for donor meetings.

‘The Lincoln Project are the REAL traitors! You aren’t Republicans. You are nothing but a bunch of America last losers,’ Greene lashed out in a Twitter tirade.