Rep. Marjorie Greene (R-Ga.) said on Saturday that she had received a call with from former President Donald Trump during which he expressed his support.

“I had a GREAT call with my all time favorite POTUS, President Trump!” she wrote in a string of Twitter posts. “I’m so grateful for his support and more importantly, the people of this country are absolutely 100% loyal to him because he is 100% loyal to the people and America First.”

She didn’t elaborate on the details of the call.

Trump’s office did not respond to a request for comment from The Epoch Times.

Democrats have hyped up attacks against Greene, a staunch supporter of Trump’s policies as president, after she filed articles of impeachment against President Joe Biden on the first full day of his presidency.

She vowed that she will not back down.

“I won’t back down. I’ll never apologize. And I’ll always keep fighting for the people. For me, it’s America First!!!” she wrote.

“America Last policies are policies for sell outs and losers,” she continued.

If you thought you knew what happened at Parkland, take a second look. Stunning!

The newly-elected congresswoman announced that she had introduced the articles of impeachment against Biden on Jan. 21.

The articles of impeachment concern Biden’s alleged actions involving a “quid pro quo” deal in Ukraine and alleged abuse of power “by allowing his son, Hunter Biden, to siphon off cash from America’s greatest enemies Russia and China,” Greene’s office said in a statement just a day after Biden was sworn in as the 46th U.S. president.

Within a week of Greene’s announcement, a Democrat said that he plans to introduce a resolution to expel Greene citing “numerous reports revealing her repeated endorsements of sedition, domestic terrorism, and political violence.”

“Her very presence in office represents a direct threat against the elected officials and staff who serve our government, and it is with their safety in mind, as well as the security of institutions and public servants across our country,” Rep. Jimmy Gomez (D-Calif.) said in a statement.

Greene didn’t respond to a request for comment by The Epoch Times. In a statement released on Jan. 29, she said, “Every attack, every lie, every smear strengthens my base of support at home and across the country because people know the truth and are fed up with the lies.” 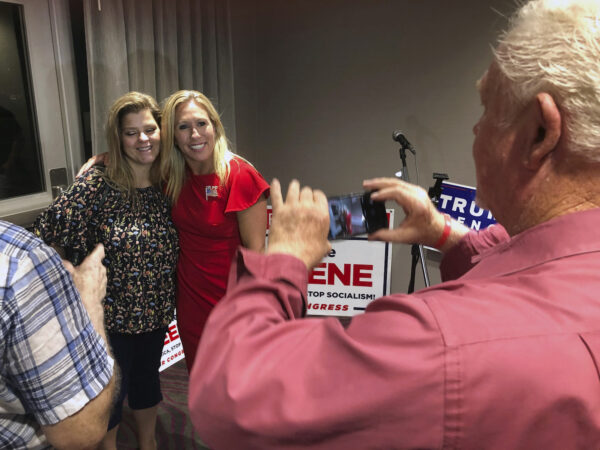 In announcing his resolution plans, Gomez claimed that Greene has supported Facebook posts that called for violence against prominent Democratic leaders. Greene has also expressed support for the QAnon movement, which has been labeled by the mainstream media as a fringe conspiracy theory.

QAnon follows clues from cryptic messages posted to anonymous imageboards. A prominent aspect of the theory alleges that global elites are part of a satanic pedophile ring.

Greene has called the movement “a once-in-a-lifetime opportunity to take this global cabal of Satan-worshiping pedophiles out,” according to the Atlanta Journal-Constitution.

Gomez hasn’t yet indicated when he will be introducing the resolution to expel Greene.

Greene also is facing pressure from the Republican side as the Democrats have been pressing House Republican Leader Kevin McCarthy (R-Calif.) to remove Greene from her committee assignments.

Mark Bednar, a spokesperson for McCarthy, told Axios that the House Republican leader will meet with Greene next week.

“These comments are deeply disturbing and Leader McCarthy plans to have a conversation with the Congresswoman about them,” Bednar reportedly said in a statement.