This morning, during an emergency hearing, MI 13th Circuit Court Judge Kevin A Elsenheimer granted permission to Attorney Matthew Deperno to release the findings from their forensic examination of 16 Dominion Voting machines in Antrim County, MI where thousands of votes flipped from President Trump to Joe Biden on November 3, 2020.

Earlier this week, we reported about a lawsuit filed by Matthew DePerno of DePerno Law on behalf of Central Lake resident William Bailey. In addition to thousands of votes that were flipped from President Trump to Democrat candidate Joe Biden, Bailey was concerned about ballots that were re-run through the Dominion tabulator machine after a 262-262 tie on a vote a ballot initiative that would allow a marijuana establishment to be located within the Village of Central Lake.

While ballots were being inserted into the machine, 3 of them were destroyed and were not placed through the tabulator. At the conclusion of the recount by the tabulating machine and with three fewer votes, the result was 262-261, and the initiative passed. Of course, this result could only be possible after 3 of the ballots were destroyed. 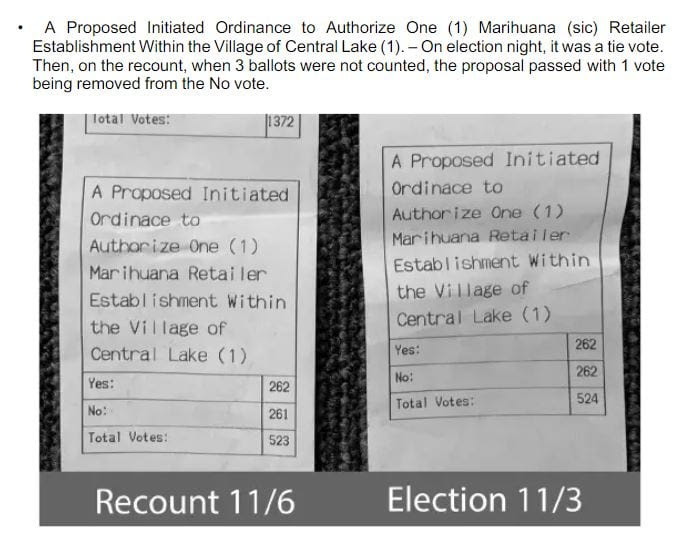 In Central Lake’s School Board election, 742 votes were added to the total after a recount on November 6. (First image)

Dominion’s vote totals showed 663 people voted in a district where there were only 6 eligible voters and only 3 of those 6 actually voted. Somehow, Dominion added 660 additional votes to the final tally. (Second image) 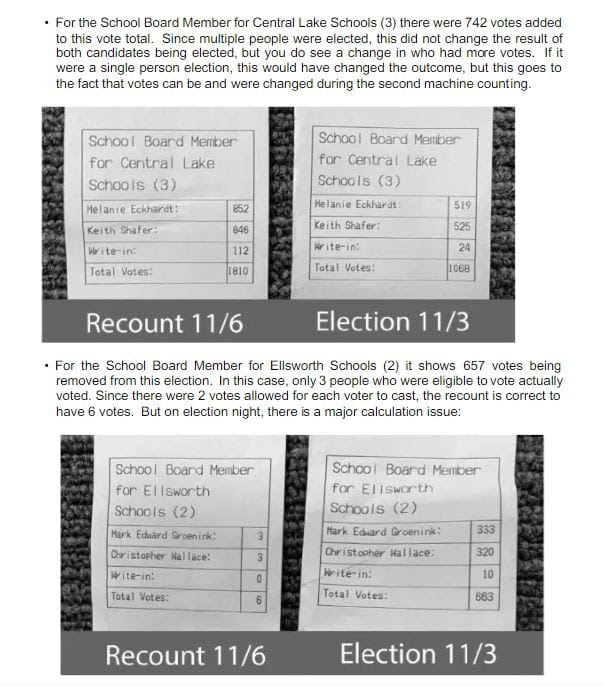 Do you think Dominion machines were rigged?

“Based on all the allegation of fraud, statutory violations, and other misconduct,” DePerno wrote, “it is necessary to immediately permit the plaintiff to take a forensic image of the 22 precinct tabulators, thumb drives, related software, the Clerk’s “master tabulator,” and conduct an investigation of those images, after which a manual recount of the election results and independent audit of the November 3 election may be ordered to ensure the accuracy and integrity of the election.” 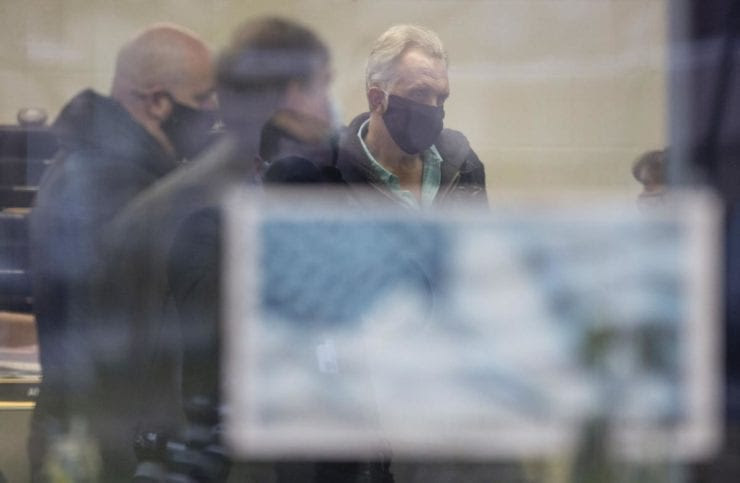 In his lawsuit, Matthew DePerno claims that based on the evidence they have provided to the court that Dominion Voting Systems “committed material fraud or error in this election so that the outcome of the election was affected.”

At 5:30 PM on Friday, December 4, 13th Circuit Court Judge Kevin A. Elsenheimer granted permission to William Bailey and his team of IT experts to conduct a forensic study of the 16 Dominion voting machines, tabulators, thumb drives, related software, and the Clerk’s “master tabulator.” In his court order, Bailey was also granted the ability to conduct an independent investigation of the images they obtained in their examination.

Matthew DePerno was able to quickly assemble a team of seven highly trained forensic IT experts who agreed to arrive the next day (Saturday) to conduct the forensic examination.

After 8 hours, the collection was complete. With 16 CF cards (similar to SIM cards), 16 thumb drives, and forensic images of the Dominion voting machines in hand, the IT team was escorted to the local Antrim County Airport by two Antrim County Sheriff vehicles, where they boarded their jet plane with evidence in hand.

DePerno waited patiently for the results of the forensic examination of the Dominion voting machines to arrive. While he was waiting for the results, Michigan’s radical Attorney General Dana Nessel who won her election after bragging she was the best candidate for the job because she didn’t have a penis, added Michigan’s far-left, dishonest Secretary of State Jocelyn Benson to the lawsuit as a defendant on Wednesday. 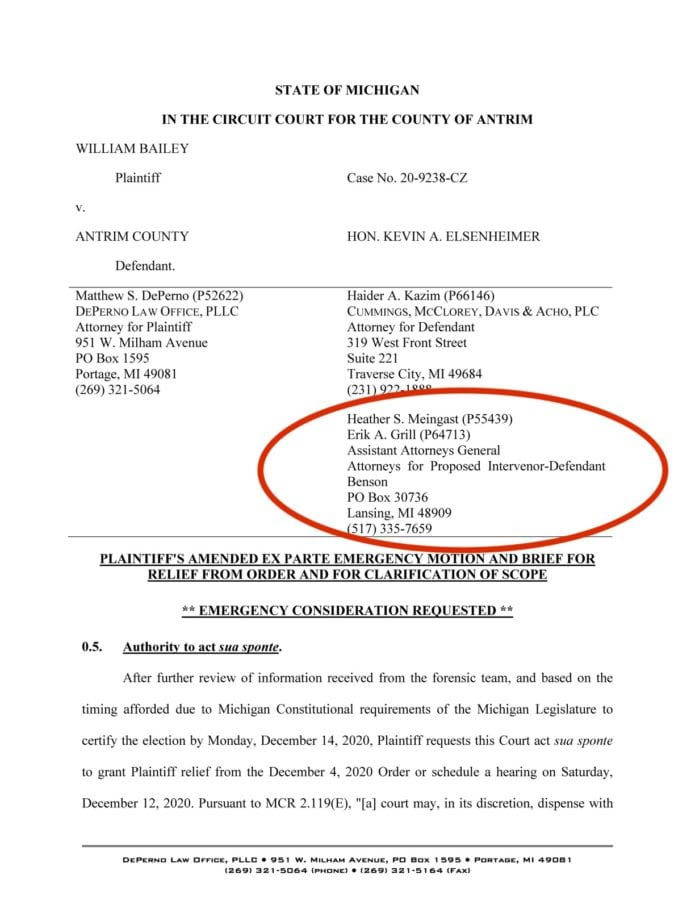 On Friday, Constitutional Attorney Matthew DePerno, who is now in possession of the initial preliminary results of the forensic examination of the Dominion voting machine, 16 CV data cards, and 16 thumb drives from the Dominion machines, filed an emergency order asking Judge Kevin Elsenheimer to lift the protective order prohibiting him from sharing the results of the inspection, calling it a matter of “national security.” In his emergency motion, DePerno reminds the judge that time is of the essence, as the deadline for electors to vote for the next President is Monday, December 14, 2020.

In his order, Deperno states that Secretary of State Benson has refused to permit a forensic examination of the Dominion software, presumably because she is fearful of violating the Licensing agreement with Dominion. DePerno points out, however, that the agreement produced by Antrim County was not signed, and that they have not been able to verify that the contract was actually signed. 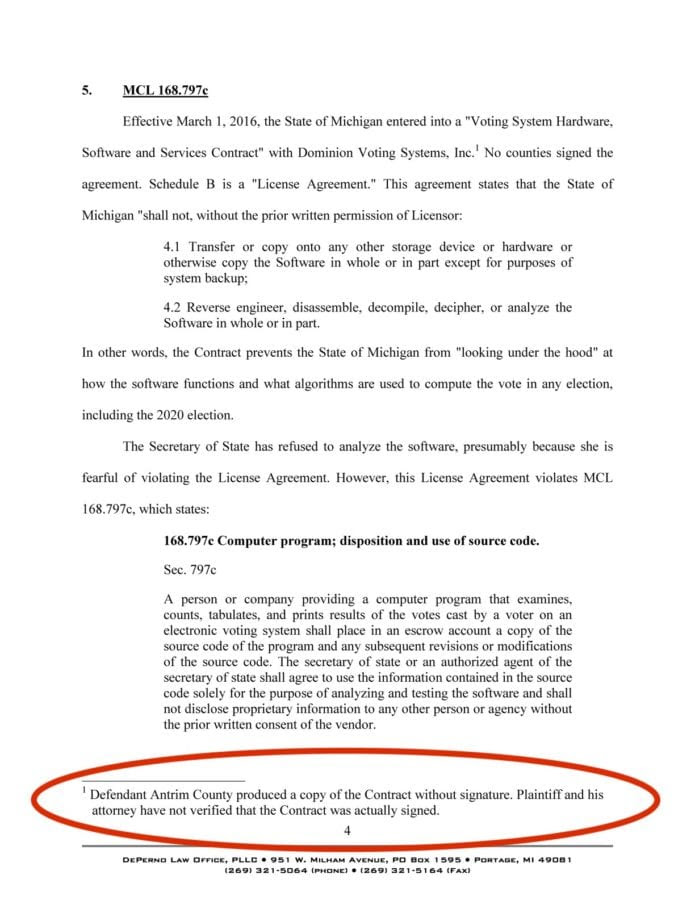 DePerno asked for the preliminary results of the election to be released to the people of Antrim Co, of the State of MI, of the USA, and to the President and Vice President of the United States, as well as Chad Wolf, Sec. of Homeland Security and DNI John Ratcliff 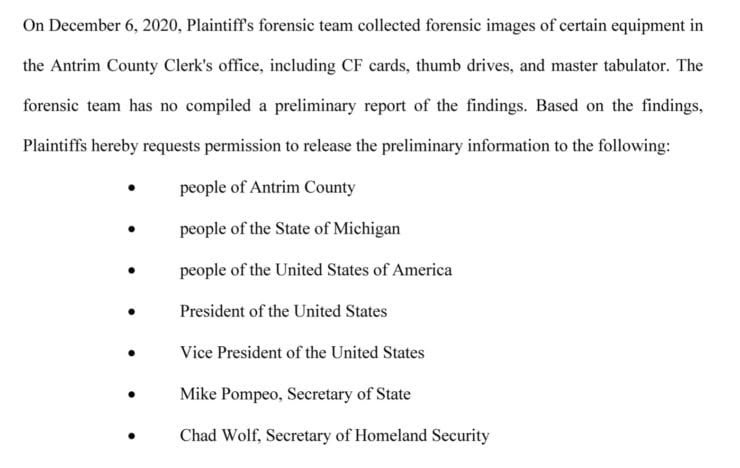 In his emergency order, DePerno argued that the protective order placed on sharing the results of the forensic examination was for the purposes of preventing the plaintiff from reverse engineering Dominion’s software for malicious purposes. DePerno argues that his plaintiff, Mr. Bailey, and his IT team have no intention of reverse-engineering the software for malicious purposes. Mr. DePerno adds, “the public interest weighs in favor of granting the Plaintiff’s preliminary injunction.” He explains, “The Court believes that confirming the accuracy, integrity, and security of the electoral process is a greater public interest at this juncture than the potential misuse of reverse engineering data.”

On Sunday evening, the Gateway Pundit wrote – Michigan’s radical Attorney General Dana Nessel tweeted a warning shot directed specifically at “Lawyers who practice in Michigan,” letting them know that their oath prevents them from filing “unjust and/or frivolous actions” or from misleading the court.

Fun fact: Lawyers who practice in Michigan are required to take an oath to support the MI and US Constitutions, not to file unjust and/or frivolous actions or mislead the court. The spate of Trump lawsuits in our state violates each of these tenets. It demeans our profession.

Fun fact: Lawyers who practice in Michigan are required to take an oath to support the MI and US Constitutions, not to file unjust and/or frivolous actions or mislead the court. The spate of Trump lawsuits in our state violates each of these tenets. It demeans our profession. pic.twitter.com/YtXXmhFOIu

The brave patriot and Constitutional Attorney told The Gateway Pundit that he’s curious about the timing of Nessel’s tweet, and he wonders why “Attorney General Nessel is bringing the power of the state in to threaten attorneys?” He also told us that if Nessel is aware of misconduct by another attorney and isn’t reporting it, she is actually violating her oath by not reporting it.” DePerno told The Gateway Pundit, “Nessel’s only goal is to intimidate.”