Who in the USA is not brutally aware of how consequential the 2020 POTUS election is?

Surely, the outcome of this election will determine the fate of the American people as it will the future of the Republic.

We are a group of U.S. citizens. We come from every voting demographic—the right, the left, the center and the unaffiliated. Stated another way, some of us are liberals, some are conservatives, others are independents and still others are completely apolitical.

However, we all share one thing: As residents of the 50 states, we are deeply concerned about the longevity and health of our constitutional republic. The Founding Fathers of this great nation established these United States of America as a constitutional republic whose leaders would be chosen in a fair democratic electoral process.

November 3rd of 2020 is the culmination of that process whereby We the People choose our government. As always, there are really only two choices.

Although it ought to be self-evident, one of those choices guarantees a future marked by the total loss of national sovereignty and territorial integrity. It also means a direly collapsed economy and degenerate civil society. Moreover, that choice will translate to more riots, looting, arson, violence and terrorism, as well as widespread crime, anarchy, corruption, lawlessness and racial tension. That choice is clearly Joe Biden and Kamal Harris.

Look it: President Trump said it truthfully when he made the extremely serious and accurate observation: “Joe Biden doesn’t even know he’s alive.” See this VIDEO.

That means that a vote for Joe Biden is really a vote for Kamala Harris. Most folks on the Left have resoundingly rejected Harris and yet here she is poised to be the President of the United States when Joe Biden is removed for so many legitimate reasons it’s tough to keep track of them all. For example, according to the US CODE, Joe Biden is permanently disqualified from holding any public office in the U.S. Federal Government.

Then why is he even there?! How is a senile, dementia-afflicted, verbally incapacitated, 77-year-old corrupt politico even on the ballot?!?! See: ELDER ABUSE! Is Joe Biden being profoundly victimized by his Democrat handlers?

You may have guessed it: Biden was chosen for reasons that would horrify the average Democrat, liberal, progressive or lefty.

In reality, Joe Biden was selected by the DNC so that a stone-cold Manchurian Candidate — Kamala Harris — could be stealthily installed into the Oval Office. That possibility alone ought to send shivers up the spine of every American alive; and you know those who have passed on are turning in their graves at the prospect.

But how did we get to this exceedingly precarious state of affairs?

That the soon-to-be torchbearer for the Democrat Party and potential occupant of the White House is a full-time flamethrower. We’re talking about a career political criminal who literally breathes fire of death and destruction every time she opens her mouth.

Just take a close look at the firebreathing Kamala Harris in this scary interview conducted by a mainstream media communist collaborator.

It should be abundantly clear that Senator Harris’ main mission is to pick up where Obama left off. Whereas Obama set the stage for a nationwide race war, Harris’ primary mission is to plunge the country into biggest race war in history. In fact, her entire story revolves around this well concealed agenda as seen in this incriminating exposé: OPERATION CRAFTY BEAVER: Deep State attempts to start a race war before stealing the 2020 POTUS election.

All of this discussion about an obvious Deep State conspiracy to shoehorn such a dangerous arsonist into the POTUS position ought to give those on the Left reason to pause and take a step back…particularly before casting your vote. After all, it’s your cities that Harris and her fellow Democrats are burning down. Just look at what they’re doing to the Charcoal State of California! See: OPERATION TORCH CALIFORNIA: Hard Evidence Proving Wildfires Started by Arsonists (Videos)

Let’s be real… and we’re especially talking to our fellow citizens on the Left: Kamala Harris and Joe Biden don’t work for the American people, they work for their hidden masters in the New World Order globalist cabal. Yes, they may answer to their American Deep State handlers on a day-to-day basis, but they act on direct orders issued by foreign entities whose only goal is to destroy the American Republic—FOREVER!

Now the good folks on the Left, Right and Center know why this open letter was posted as an exceedingly urgent SOS.

Truly, the American ship of state is heading toward a cataclysmic iceberg event should the Biden-Harris ticket prevail on Election Day.

May the American electorate see the unvarnished truth and respond accordingly. All future generations will be profoundly affected by the outcome of this monumental election.

Lastly, even if Biden-Harris are decisively defeated, the Union will still face the greatest challenges of the millennium. Those formidable obstacles, and there are many, must be confronted with as many righteous souls as possible; otherwise, there will be no peace or prosperity for anyone in the USA.

Therefore, we strongly encourage everyone to vote for what is best for the American people and not according to a party line vote.  It was John Adams who quite presciently uttered the following wise words about America’s two-party system. 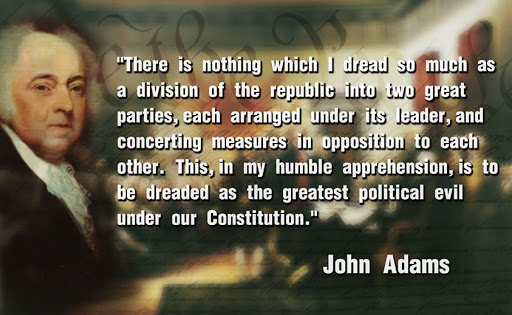 3 thoughts on “State of the Nation, An Open Letter to the American Electorate”