More than ten thousand people who believe coronavirus is a hoax have gathered in London’s Trafalgar Square to protest against lockdown restrictions and vaccination programmes.
The ‘Unite for Freedom’ rally started at noon in the capital and calls for an ‘end to Government lies’ and the restoration of all freedoms.
Pictures from the demonstration show Trafalgar Square almost full of demonstrators – none of whom are wearing masks – holding signs that brand the pandemic as a ‘hoax’. When full, the square holds up to 35,000 people.
Other signs claimed masks reduce immunity and likened the restrictions to ‘child torture’. One person held a homemade placard on which he had scrawled ‘no to mandatory vaccines.’
Jeremy Corbyn’s brother Piers and conspiracy theorist David Icke were in attendance, the latter of whom urged police to ‘stop serving the psychopaths’ and join those protesting in a speech addressing the cheering crowd.
The event is set to march past Downing Street towards the Houses of Parliament where speakers are expected to address the crowd.
Video from the scene showed organisers label the government as ‘terrorists who are waging a war on the people of this country’.
One man says: ‘This is a political agenda to commit mass genocide on the population. That is their agenda.’ 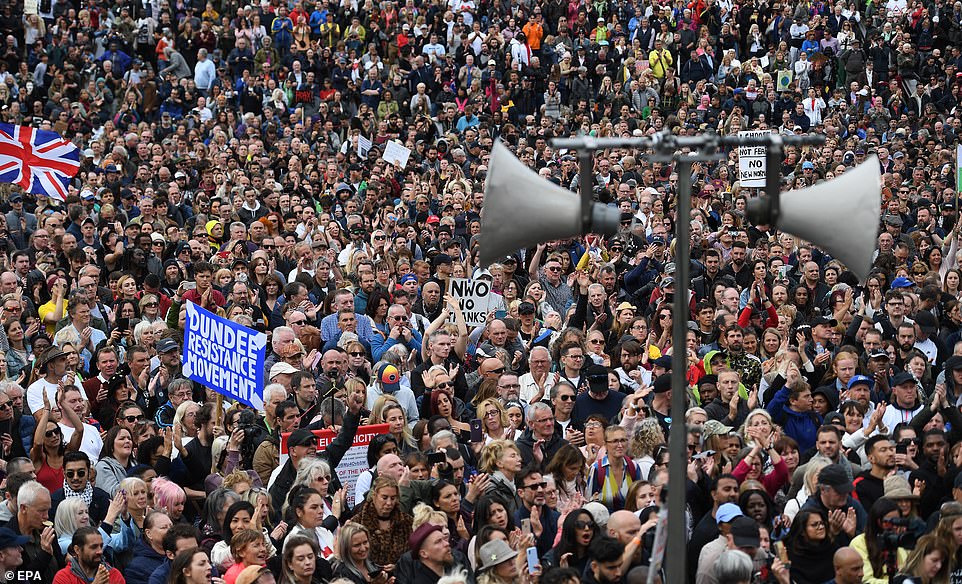 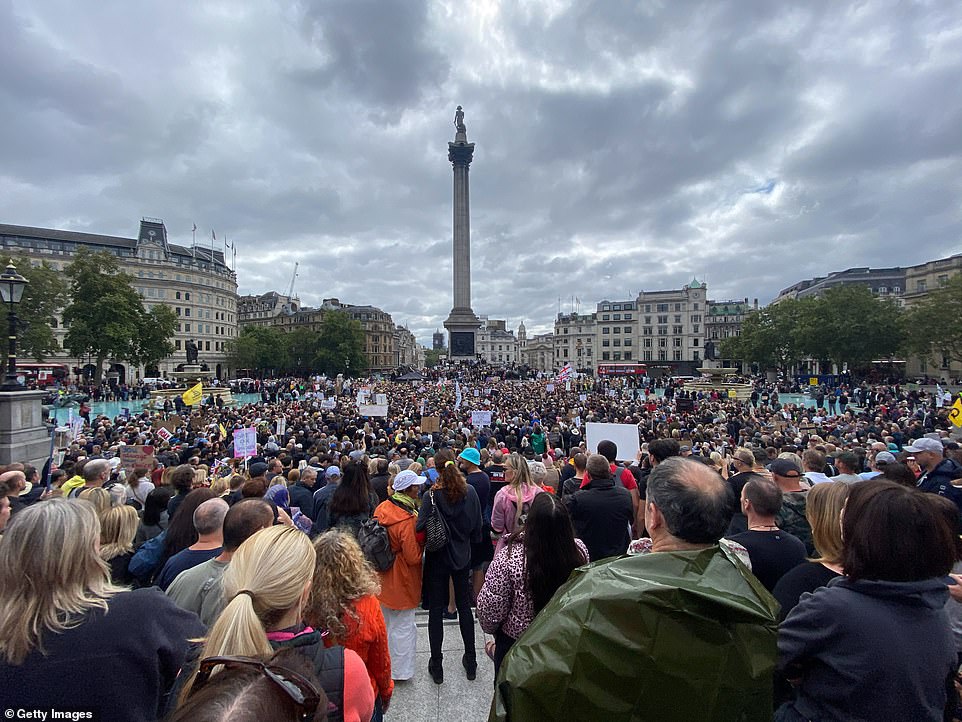 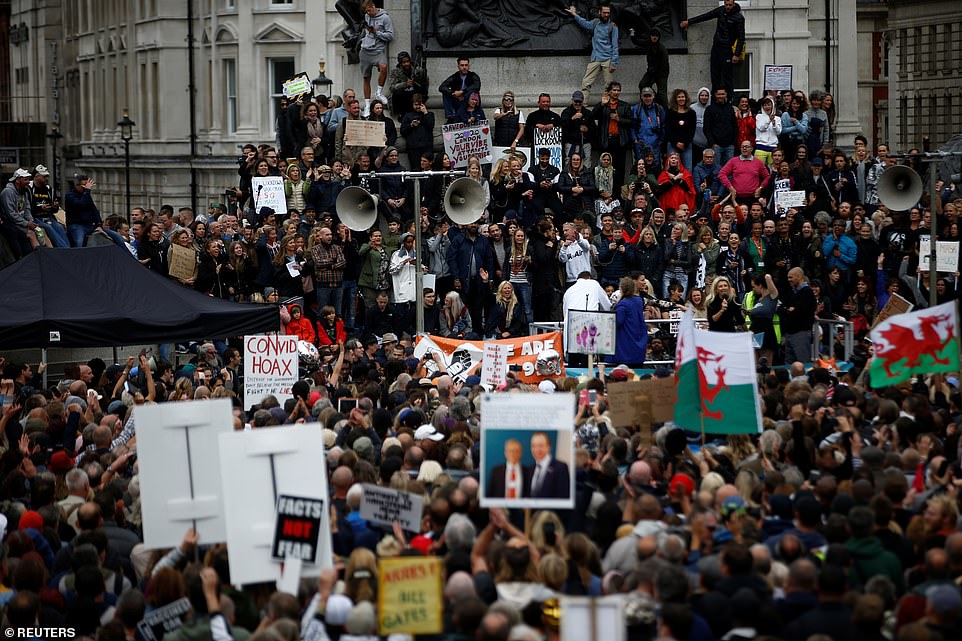 An estimated 10,000 people attend the demonstration against coronavirus restrictions in Trafalgar Square this afternoon 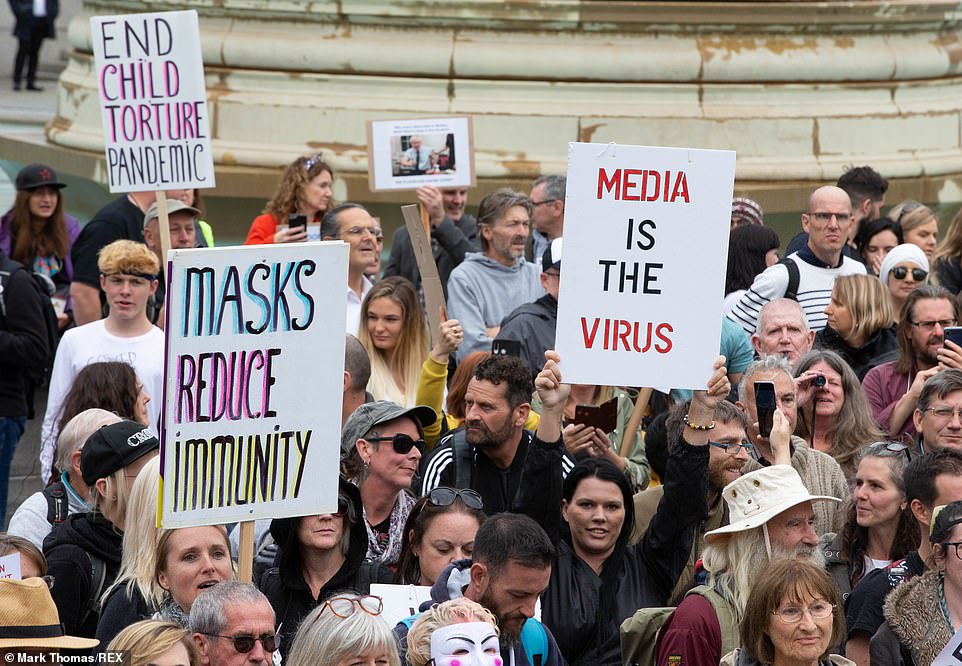 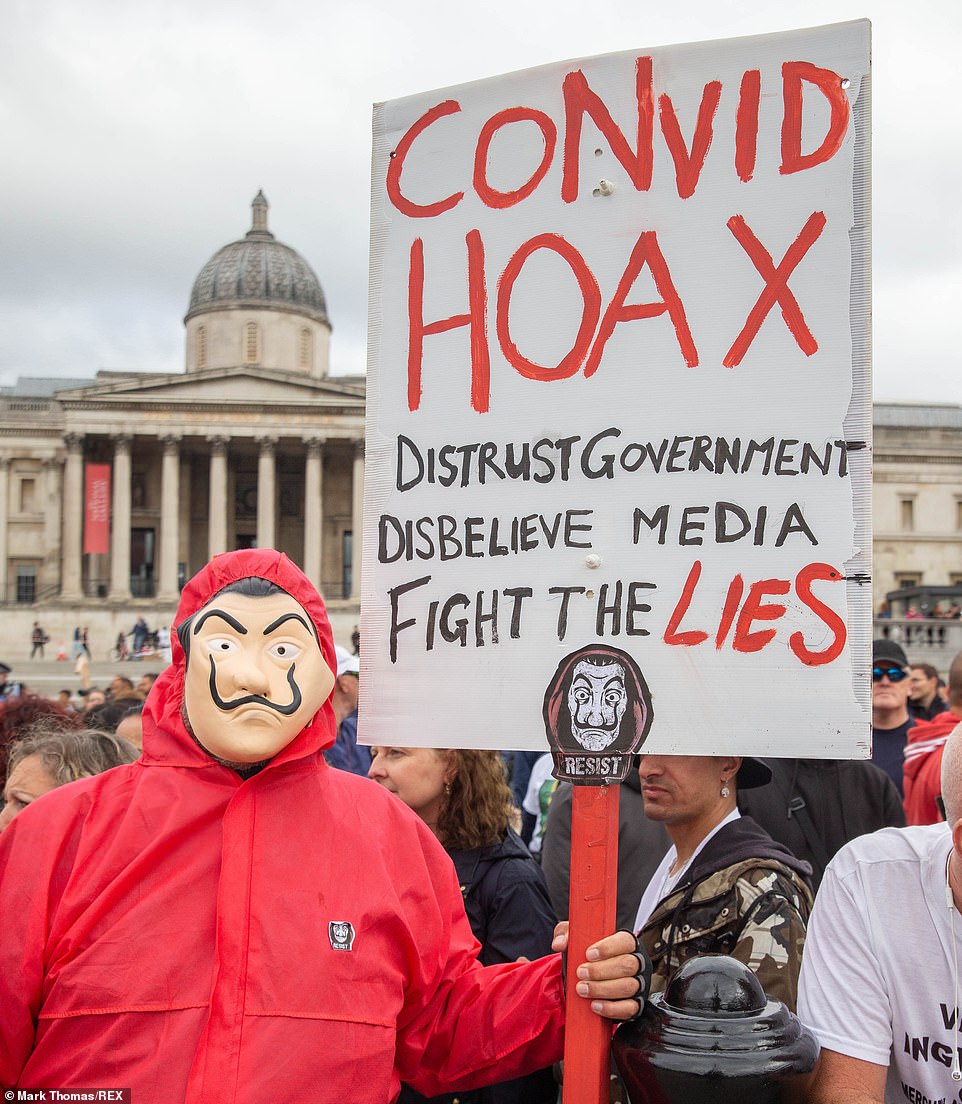 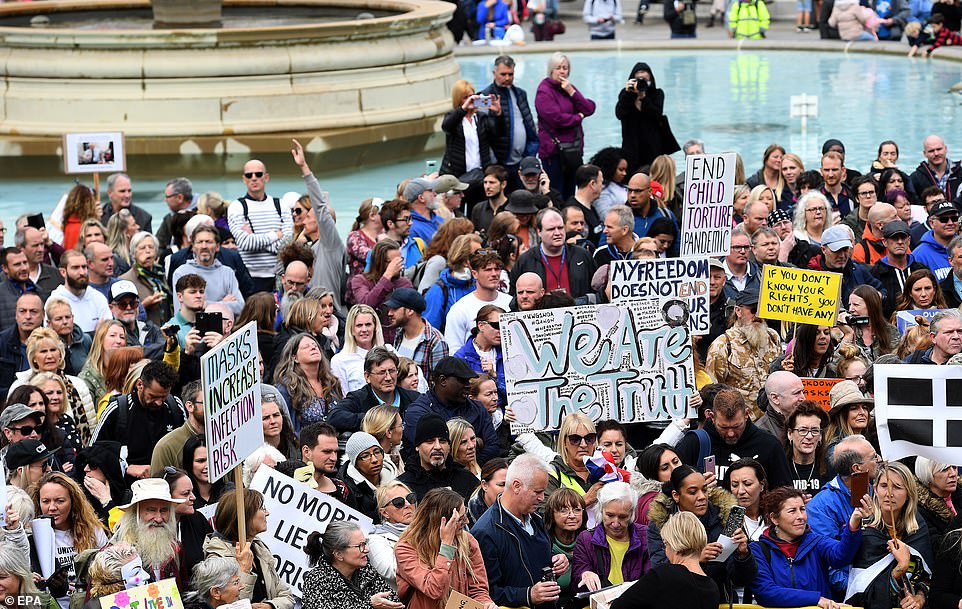 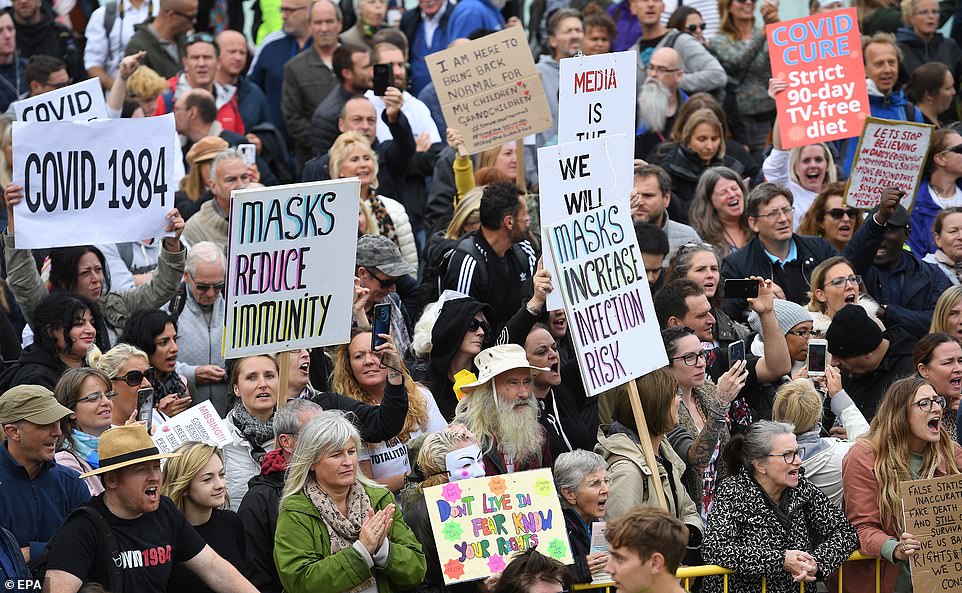 The gathering in Trafalgar Square is one of several demonstrations taking place across the world with others in Berlin
A poster advertising the event read: ‘Nothing is more important as time is very short – the Government are voting for a two-year extension of their emergency Covid-19 powers in September 2020.
‘The first six months was a disaster – this must not be allowed to continue! We have to take a stand.’
It lists its priorities as ‘no more lockdowns, no social distancing, no masks. No track and trace, no health passports. No mandatory vaccinations, no ‘new normal’. Restore all human rights that have been violated.’
The poster lists ‘top world class doctors and nurses speaking out with real truth on Covid-19 against GMC constraints’.
Sonia Poulton, who was part of the protest, shared a video to Twitter to urge people to attend.
She said: ‘People are coming today to make their voices heard against mandatory vaccinations, mandatory masks, mandatory anything really. No more lockdowns, no more second wave business’.
It is understood Jeremy Corbyn’s brother Piers and conspiracy theorist David Icke are in attendance.
Icke, who is reportedly set to speak at 3pm outside the Houses of Parliament, hit headlines in May after he made controversial unproven claims about the virus on several internet platforms, including one that it is linked to the 5G mobile network.
Both YouTube and Facebook deleted his accounts citing violation of their respective policies in relation to disputing the existence of Covid-19.
In April, Icke landed London Live with a sanction from regulator Ofcom after the outlet aired an interview with the former footballer.
In the interview, Icke aired unsubstantiated theories about the virus and suggested mandatory vaccination would be ‘fascism’.
Ofcom said it was ‘particularly concerned’ by Icke ‘casting doubt on the motives behind official health advice to protect the public from the virus’.
‘These claims went largely unchallenged during the 80-minute interview and were made without the support of any scientific or other evidence.’
Speaking at the event, Icke accused the police present of enforcing fascism and subjecting the people to a psychopathic regime.
Jeremy Corbyn’s brother Piers is also a well-known conspiracy theorist who has spouted claims that the coronavirus is linked to 5G mobile networks.
In June, he faced charges for his part in a similar May demonstrations at Speakers Corner, Hyde Park, involving 50 people which breached lockdown rules.
The Metropolitan Police have dedicated a large police presence to monitor the demonstration and have written an open letter to those organising protests this weekend.
It reads: ‘The MPS is aware that the coming bank holiday weekend may see a number of large gatherings in indoor or outdoor spaces.
‘The MPS strongly advises people not to attend any large gathering for the protection of yourselves and others. We are still in the middle of a global pandemic.’
It goes on to remind the public that it is their responsibility to ensure they are not committing an offence.
‘Please be advised that you may also be at risk of committing a criminal offence. Under the Health Protection (Coronavirus, Restrictions) (No. 2) (England) Regulations 2020 (as amended), no person may participate in a gathering which consists of more than 30 persons either indoors, on a vessel, or in a public outdoor place, unless certain exemptions apply.
‘ We all need to continue to do our part to prevent the spread of the virus.’ 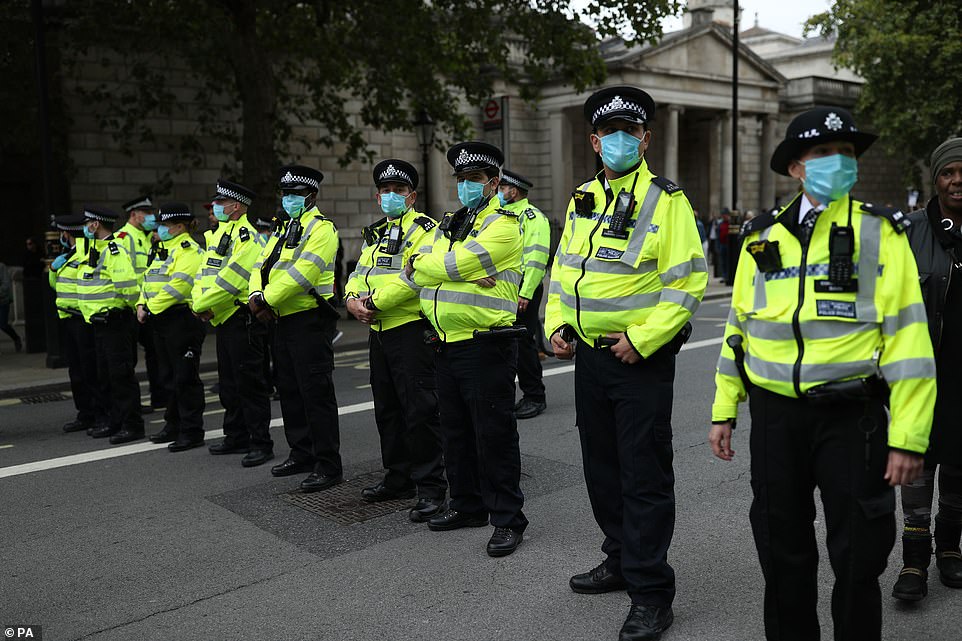 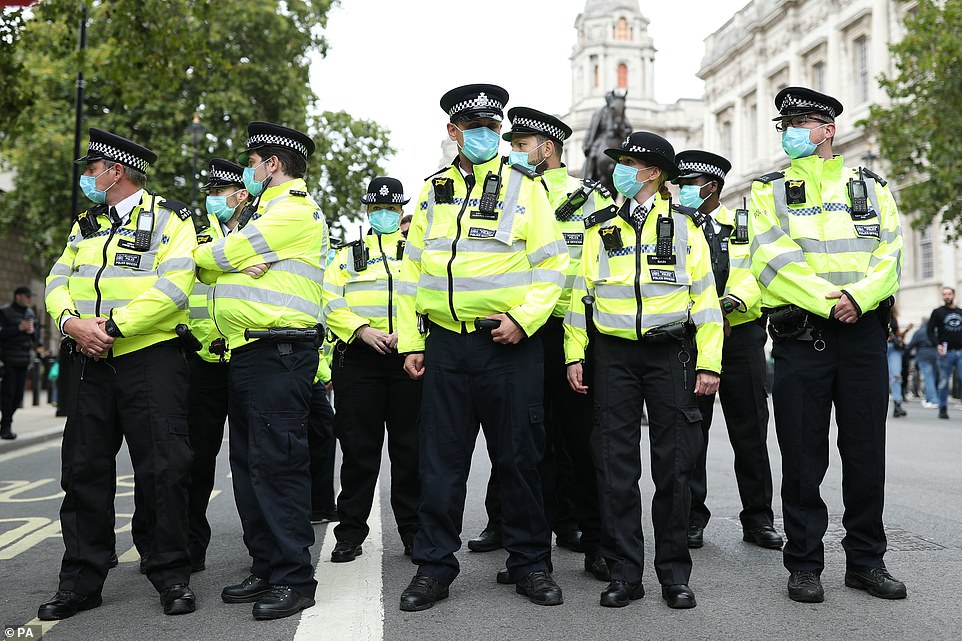 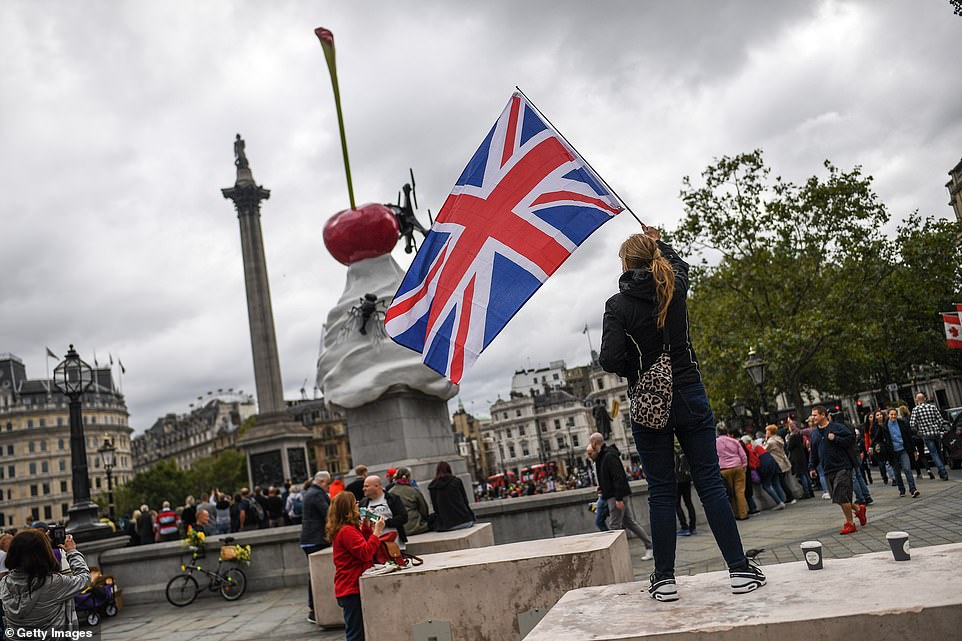 Anti-mask protesters are seen at the Unite for Freedom protest in Trafalgar Square, London, this afternoon 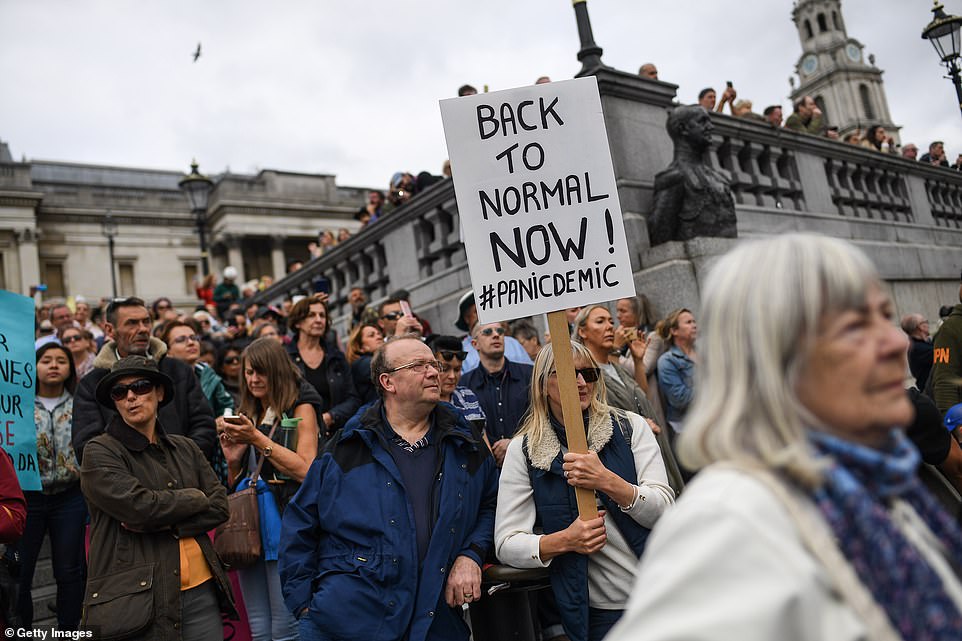 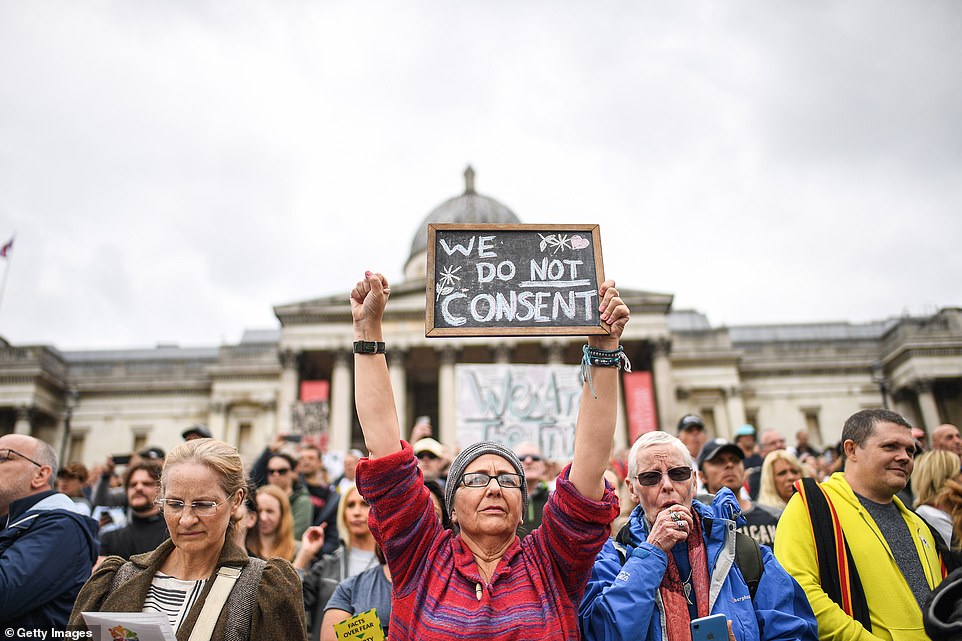 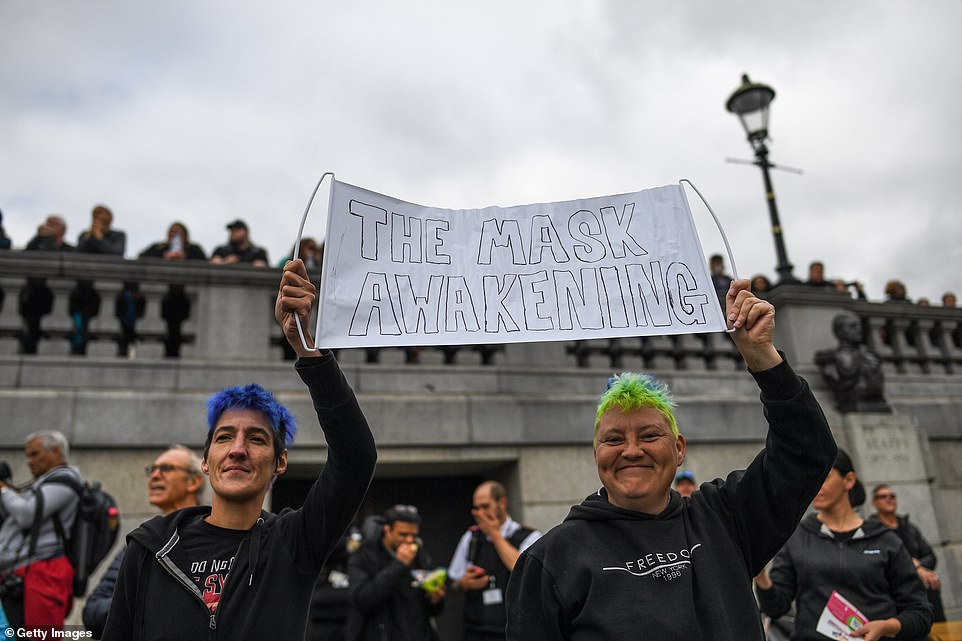 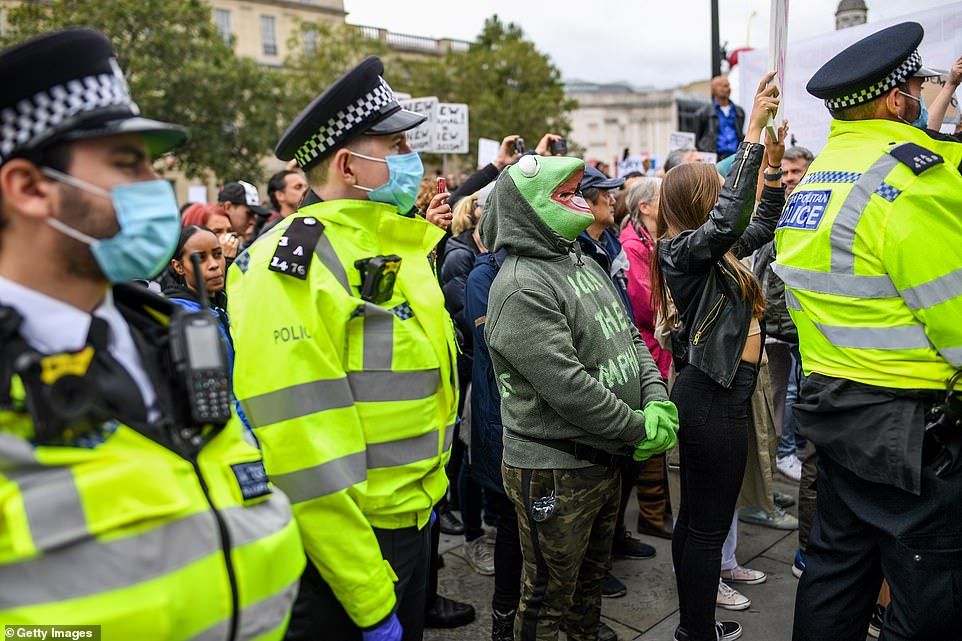 Police officers, who were wearing masks, were in attendance to keep the peace as thousands gathered in the capital city 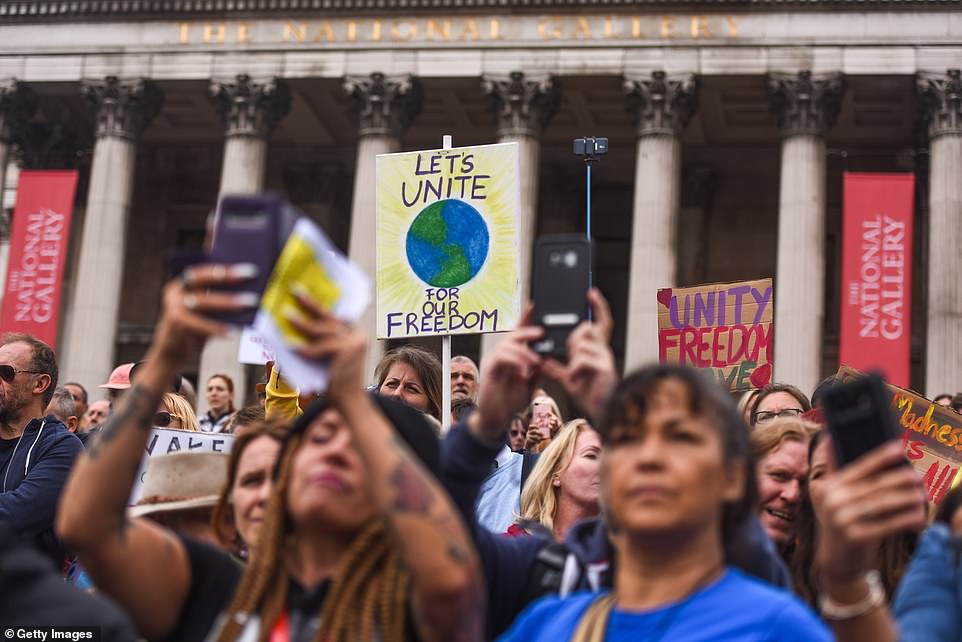 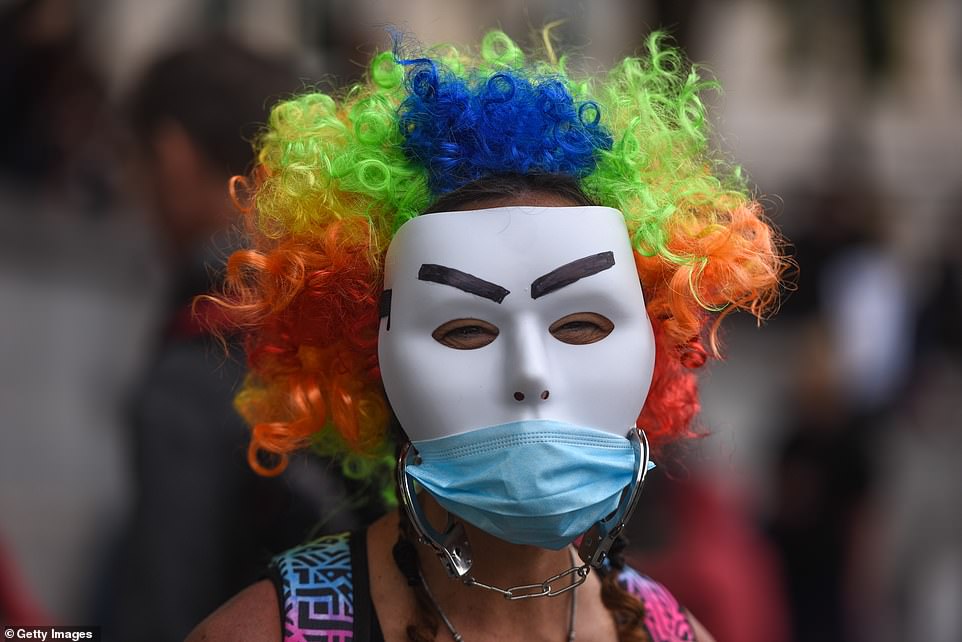 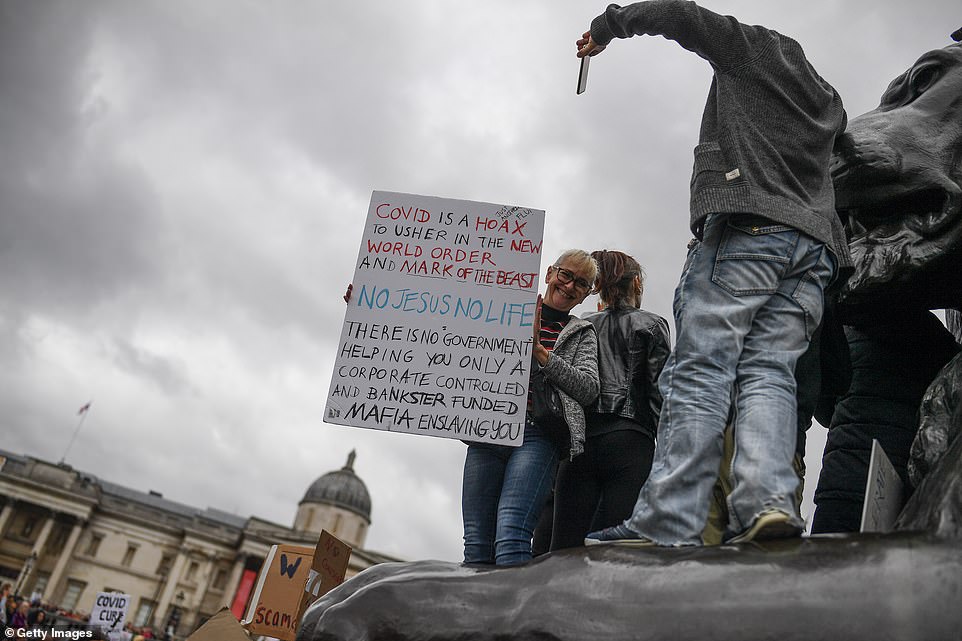 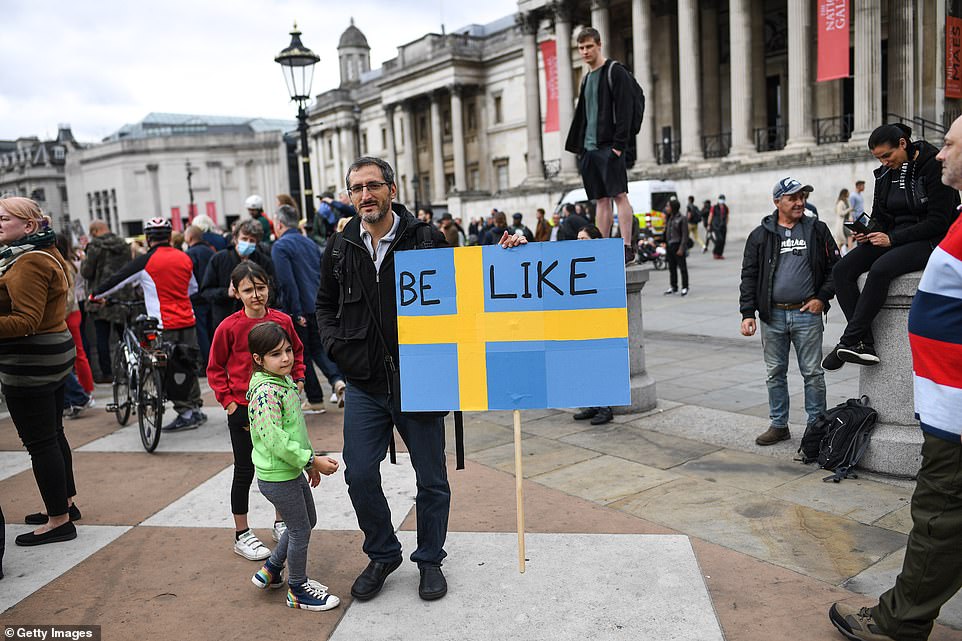 Some called for the UK to be like Sweden, who has not seen the same level of restrictions put in place as the United Kingdom 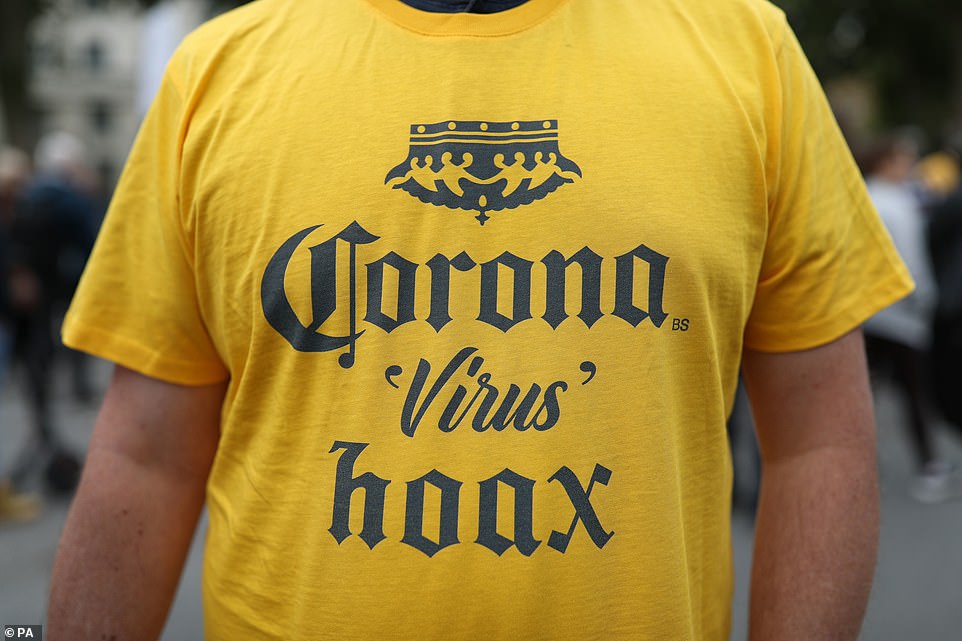 Anti-lockdown protesters, who believe that the coronavirus pandemic is a hoax, gather at the ‘Unite For Freedom’ rally
The demonstration is one of several taking place around the world under the Unite for Freedom banner.
Berlin police on Saturday disbanded a mass protest in the German capital against coronavirus curbs a few hours after it had begun after marchers failed to heed their orders to keep their distance and wear masks.
The protest came as infections rise across Europe, with similar protests during the day in Paris and elsewhere.
In Denmark, protesters take part in a demonstration against the use of face masks and other Covid-19 related restrictions near the Danish parliament building Christiansborg in Copenhagen.
Across Europe, countries including France, Spain and Italy continue to see increases in the number of coronavirus cases.
Yesterday France added 5,429 cases overnight, government figures showed, marking the country’s largest single-day increase since April 14, and the third-largest daily rise since the pandemic began.
Meanwhile Italy, which had some of the lowest case totals in Europe after reopening its economy, registered 1,367 cases – its largest rise since May.
Spain registered another 7,296 cases, enough to push the country above the US – the world’s worst-affected nation – in number of cases per million inhabitants, based on a seven-day rolling average.
The latest figures show the pandemic has killed at least 842,000 people worldwide since surfacing in China late last year.
In the UK, more than 331,644 people have been infected and 41,486 people have lost their lives to the virus. 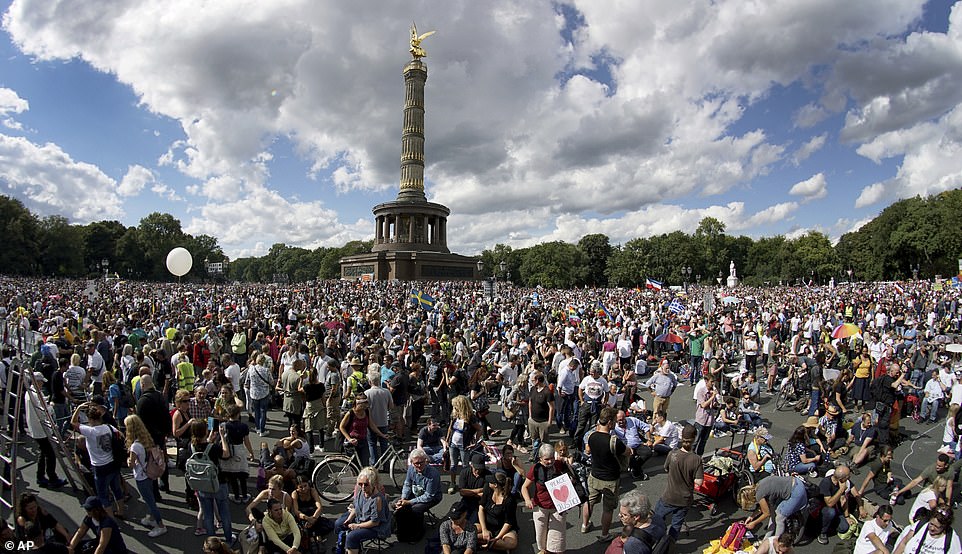 People gather at the Victory Column as they attend a protest rally in Berlin, Germany, demonstrating against Covid measures 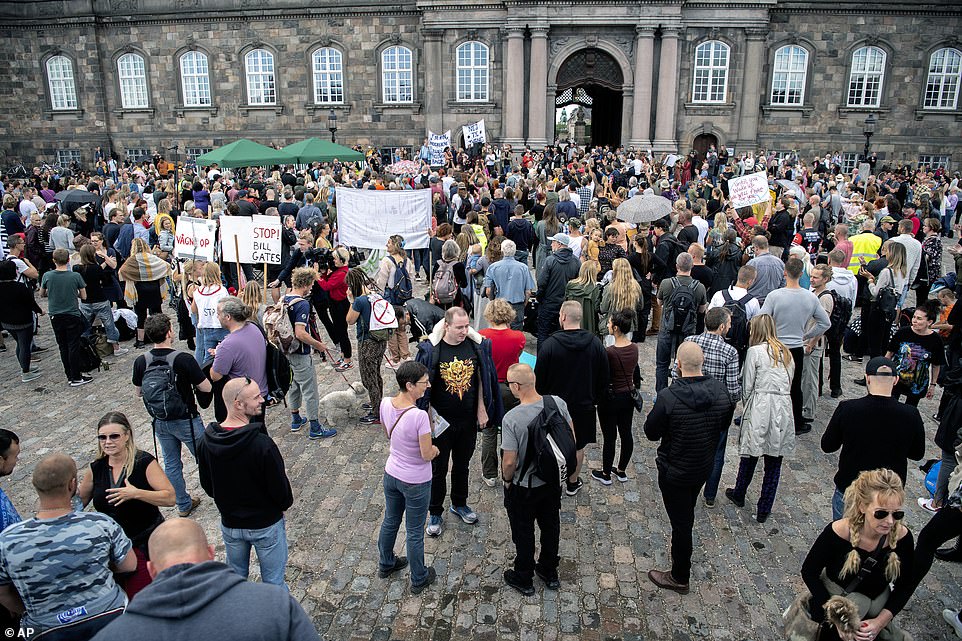 Protesters take part in a demonstration against the use of face masks and other Covid-19 related restrictions at the Danish parliament building Christiansborg, in Copenhagen, Denmark, at the same time as protesters gathered in London 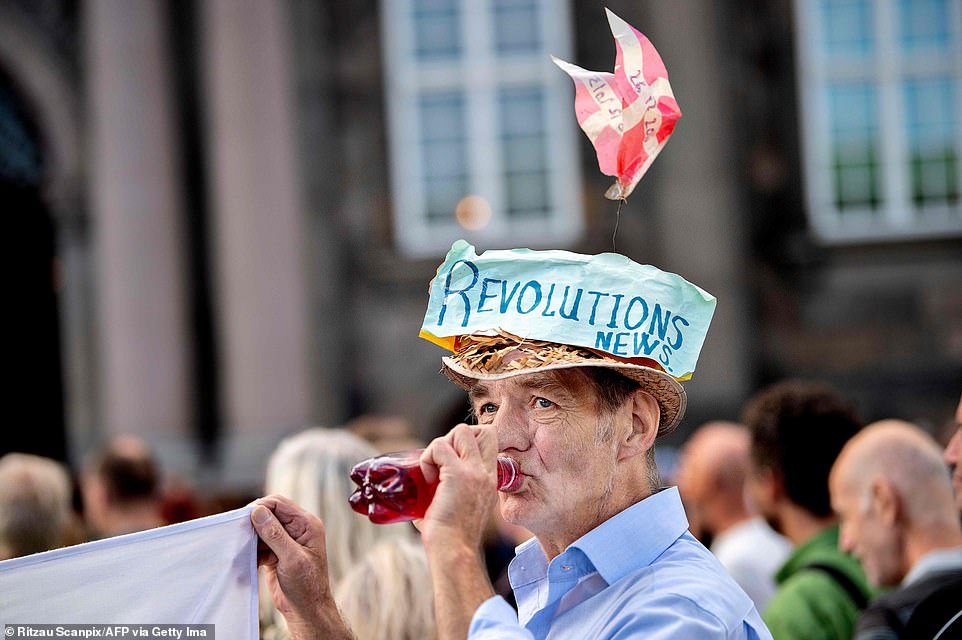 A protester drinks from a bottle as he wears a hat with a Danish flag and a placard reading ‘Revolutions news’ at a demonstration against the use of face masks and other Covid-19 related restrictions near the Danish parliament building
Please follow and like us:

COUNTER-COUP: Deep state swamp moves against disastrous Biden regime as swamp creatures realize the whole country could burn down if they don’t stop the madness

32 thoughts on “More than 10,000 COVID conspiracy theorists gather in London: Huge crowd of anti-vaxxers led by David Icke gather to argue that virus is a lie spread in secret global plot organised by Bill Gates”