Trump himself named these companies that would enter into a historical Public-Private Partnership in regards to the alleged outbreak of the Coronavirus. These agencies and corporate businesses have partnered together and were charged in the following ways to combat the alleged outbreak. Is this a massive health crisis unleashed upon America or is it a planned simulation by Bill Gates and Co…?

These companies and agencies who are allowed to partner together prior to a national emergency being declared must be examined closely in their roles during the total lock-down of America. An economic collapse right before our eyes, blamed on a “virus” which is perhaps a simulation.

We are seeing the shutdown of the entire nation, businesses are being forced to close, people are panicking, freedoms are being stripped away. Whatever the case may be, we are witnessing the total take-down of the American Constitution.

At the same time, the control of production and the control of consumption are perfectly aligning, which is resembling totalitarianism. A form of liquidation of America has begun.

CDC – gets to take control of the ship using the pharma drug-dealers medical establishment’s tools at their disposal, while also receiving a bailout. The CDC is also named by public evidence, to be behind the scenes working to diminish the Constitution & Bill of Rights by being involved in many false-flags in America over the past decade. Accepts private health companies and pharma donations.

FDA – Always in bed with the pharma drug dealers and vaccine makers. Gets to decide what companies get authorized, what pharma drugs can be dealt, and what vaccines can be administered.

Google – Appointed to take control of the online information flow, using advances surveillance software, online diagnostics, and censorship. Containing any information they choose to keep the public from thinking outside the medical tyranny box.

Walmart – Conveniently gets appointed to help control the flow of consumption, hiding behind a so-called act of kindness by lending parking lot space for drive through testing. Meanwhile, the corporate welfare queen, receiving $14 billion or more a year, had already partnered with DHS to help spy on the nation, with “if you see something, say something” Napolitano-Walmart snitch partnership.

Walgreens / CVS – In bed with big pharma pushing pharma-drugs and vaccinations while helping control the flow of information pertaining to the massive evidence of dangers to vaccines and drugs dealt. Also receives kickbacks and profits off the sale of vaccinations.

Target – First to join DHS for national security and disaster related simulations. This article/video, shows two executives sitting at a table with FEMA in 2012 discussing their collaboration in such simulations and/or situations, in “three-month” rotation centers. Target is obsessed with surveillance. “Target’s name keeps popping up in stories about video surveillance nationwide. It has pioneered relationships between corporations and state and local governments to share surveillance and intelligence information. It even has its own fusion centers.”

Quest Diagnostics – Laboratory testing, partners with Walmart in 2017, partners with CDC in 2013 when approximately 3.2 million Americans were infected by Hepatitis C. Multiple class action lawsuits were filed last year against Lab Corporation of America Holdings and Quest after data breach when they illegally “disclosed that the personal and medical information of over 19 million of their customers was exposed,” however, Trump still trusts them anyway.

Roche Pharma – Prior to outbreak, a “$600,000 donation (bribe) from Genentech to the CDC Foundation in 2012 which required the CDC to promote expanded testing and treatment of viral hepatitis. Genentech’s parent corporation is Roche, which just happens to manufacture test kits and treatment drugs for hepatitis C.” Now ordered in this Public-Private Partnership to begin manufacturing immediate coronavirus test kits at $400,000 per week until further notice.

LabCorp – Assigned Laboratory Testing during outbreak, partners with CDC. Multiple class action lawsuits were filed last year against Lab Corporation of America Holdings and Quest after data breach after they illegally “disclosed that the personal and medical information of over 19 million of their customers was exposed,” however, Trump still trusts them anyway. A number of malpractice suits have been filed against LabCorp.

Thermo-Fisher – According to this article,

“Thermo Fisher was briefly mentioned at a Friday afternoon press conference held by President Trump, who talked of the company’s scaled-up production. “I’d also like to thank Thermo Fisher,” Trump said. “The FDA’s goal is to hopefully authorize their application within 24 hours — it’ll go very quickly; it’s going very quickly — which will bring, additionally, 1.4 million tests on board next week and 5 million within a month.” Trump added: “I doubt we’ll need anywhere near that.”

In addition, according to Reuters,

“Opengate Capital Group LLC filed a lawsuit on Friday alleging that laboratory equipment maker Thermo Fisher Scientific Inc (TMO.N) sold it a Mexican plant last year without revealing that a drug cartel was operating there. The private equity firm claimed that the Reynosa, Mexico-based manufacturing facility, which it acquired as part of a larger deal from Thermo Fisher, had been regularly infiltrated by gangs from the Gulf Cartel since at least 2011, according to a copy of the complaint seen by Reuters. The lawsuit, filed in federal court in Los Angeles, alleged that Thermo Fisher had acted in bad faith by withholding documents and directing employees to conceal the drug gang’s presence at the facility.”

SECRETARY OF ENERGY – Ordered to “fill up the tanks all the way to the top” with crude oil during the coronavirus pandemic. Perhaps to change the accounting system in production to resemble price of production based upon “energy credits.” Public Health crisis scare to drain current reserves. 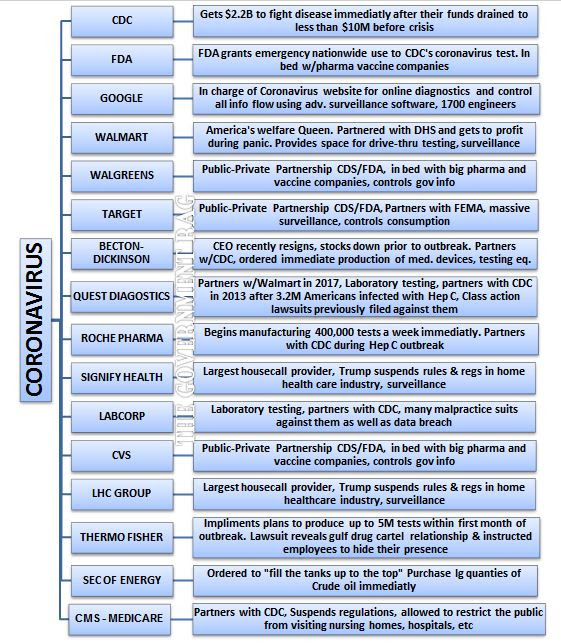 THE EMPIRE’S NEW VIRUS, FINANCIAL COLLAPSE, & THE GHOST OF VACCINE’S PAST

4 thoughts on “Stephanie Sledge, Look Who Gets to Make Billions off the Coronavirus Outbreak”