Anthony S. Fauci, MD, director of the National Institute of Allergy and Infectious Diseases, said there is “no doubt” Donald J. Trump will be confronted with a surprise infectious disease outbreak during his presidency.

Fauci has led the NIAID for more than 3 decades, advising the past five United States presidents on global health threats from the early days of the AIDS epidemic in the 1980s through to the current Zika virus outbreak.

During a forum on pandemic preparedness at Georgetown University, Fauci said the Trump administration will not only be challenged by ongoing global health threats such as influenza and HIV, but also a surprise disease outbreak.

“The history of the last 32 years that I have been the director of the NIAID will tell the next administration that there is no doubt they will be faced with the challenges their predecessors were faced with,” he said.

While observers have speculated since his election about how Trump will respond to such challenges, Fauci and other health experts said Tuesday that preventing disease pandemics often starts overseas and that a proper response means collaboration between not only the U.S. and other countries, but also the public and private health sectors.

“We will definitely get surprised in the next few years,” he said.

‘Risks have never been higher’

Ronald Klain, who coordinated the U.S.’s Ebola response for the Obama administration, said Trump’s virtual silence about the Zika outbreak and harsh comments about American volunteers infected during the West African Ebola outbreak is “not the kind of leadership we need in our next president.” 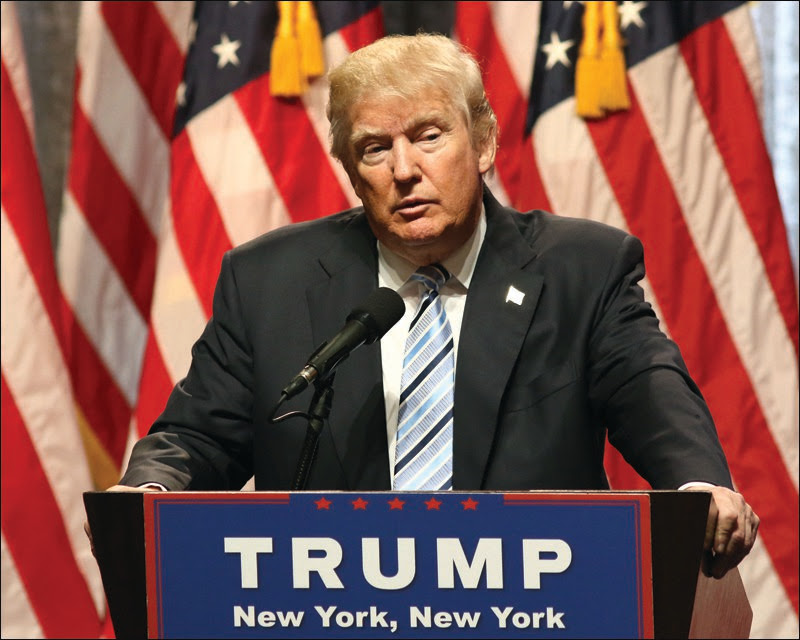 “It’s hard to think of a more important time to show a willingness to speak out in the public health community and the global health community than it is right now on the eve of Donald Trump becoming our next president,” Klain said. “The risks have never been higher, and the question of his perspective on these issues has never been more dubious than it is with Donald Trump.”

Fauci and others noted some of the disease outbreaks that recent administrations have faced, including current President Barack Obama, whose administration was tested early on with an H1N1 influenza pandemic in 2009. More recently, the administration was forced to repurpose almost $600 million in federal funds set aside for the Ebola outbreak when Republicans rejected Obama’s request for $1.9 billion to fund the nation’s Zika response.

Current Deputy Homeland Security Advisor Amy Pope, JD, said it was “typical” of the U.S. government that money meant for the Ebola epidemic was appropriated for Zika because of the proclivity of populations to worry about what is currently threatening them.

“We shouldn’t ask the American public to make those choices in the future,” she said. “It doesn’t keep them safe.”

“The mosquitoes don’t know if they’re biting Democrats or Republicans,” Klain said. “They don’t know what party you are.”

According to some of the experts who spoke on Tuesday, preparing the U.S. for pandemics requires proper funding and starts by battling disease outbreaks overseas. This is not just the right thing to do, but the best way to keep Americans safe, Klain said.

Some other highlights from the forum:

Near the end, Fauci speculated about the possibility that there will be a resurgence of Zika this summer. The virus has caused many travel-related cases in the U.S. and some locally acquired cases in Florida and Texas. Fauci said other concerns for the Trump administration include the potential for a new influenza pandemic and outbreaks of diseases that are not yet on anyone’s radar.

“What about the things we are not even thinking about?” he said. “No matter what, history has told us definitively that [outbreaks] will happen because [facing] infectious diseases is a perpetual challenge. It is not going to go away. The thing we’re extraordinarily confident about is that we’re going to see this in the next few years.” – by Gerard Gallagher

*A screenshot of the original article is posted below in case it’s removed from the Internet. Dr. Fauci’s self-indictment has been highlighted in blue. 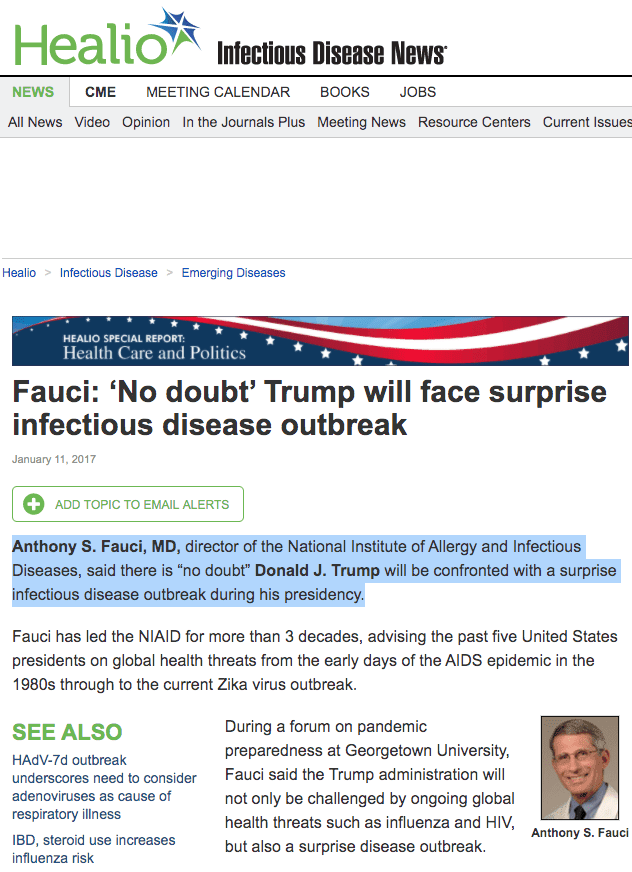 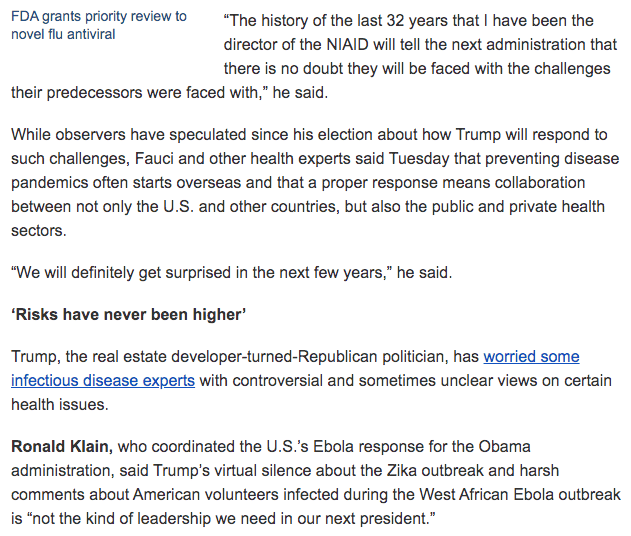 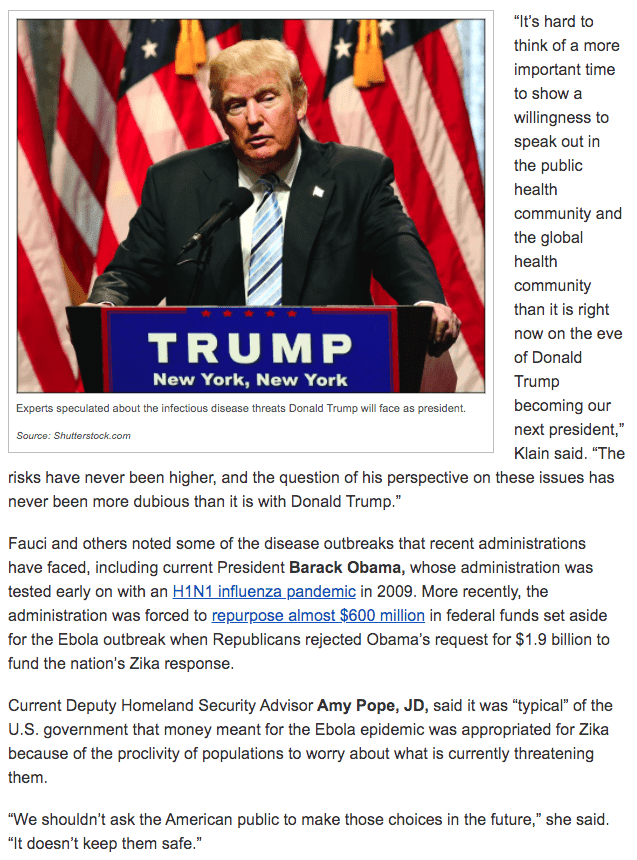 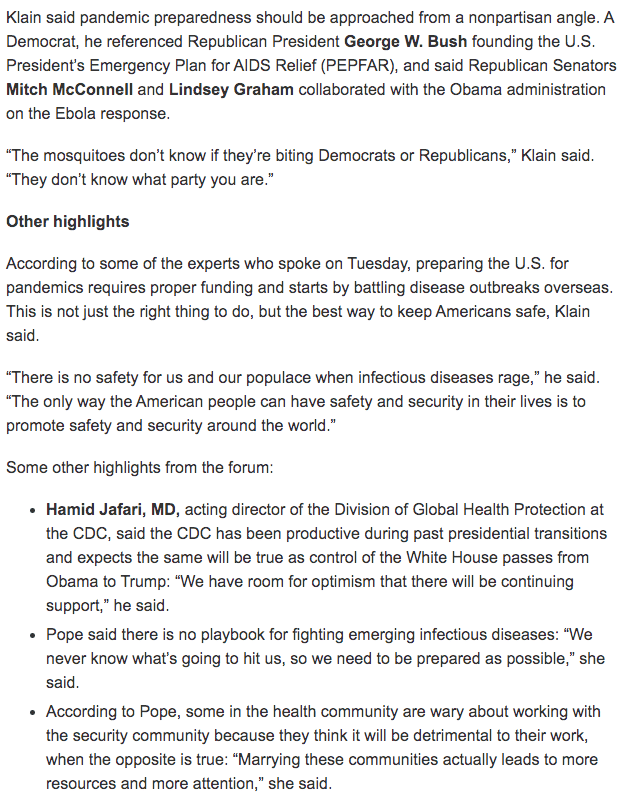 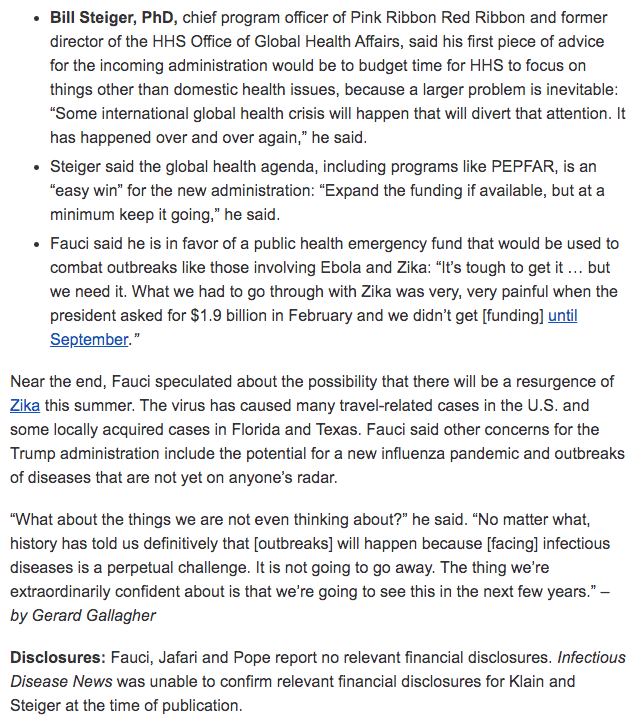 5 thoughts on “Deep State Op Dr. Anthony Fauci Declared ‘there is “no doubt” Donald J. Trump will be confronted with a surprise infectious disease outbreak during his presidency’”