Breaking News
Brandon Smith, Why Are Globalists And Governments So Desperate For 100% Vaccination Rates?
Dave Hodges, The Delta Variant Is Being Used to Hide the Real Casualty Numbers of the Covid Vaccine
Jim Fetzer, The $33,000,000 Sandy Hook Settlement is Insurance Fraud
Stephanie Sledge,  REMINGTON TAKES FALL: SELLS OUT AMERICAN GUN OWNERS & SETTLES SANDY HOOK FOR $33 MILLION
As A ‘Big Pharma’ Induced Medical Catastrophe Unfolds Across America, Radical Leftist Threatens To ‘Treat Republicans Like Nazis Did The Jews’ And ‘Be As Murderous As Possible’
02 Aug, 2021
Skip to content

When emotion rules the day facts do not matter. Sadly, that is the reality we confront when it comes to talking about Iran and terrorism. The U.S. Government and almost all of the media continue to declare that Iran is the biggest sponsor of terrorism. That is not true. That is a lie. I realize that calling this assertion a lie opens me to accusations of being an apologist for Iran. But simply look at the facts.

Here is the most recent U.S. State Department claim about Iran and terrorism:

Iran remains the world’s worst state sponsor of terrorism. The regime has spent nearly one billion dollars per year to support terrorist groups that serve as its proxies and expand its malign influence across the globe. Tehran has funded international terrorist groups such as Hizballah, Hamas, and Palestinian Islamic Jihad. It also has engaged in its own terrorist plotting around the world, particularly in Europe. In January, German authorities investigated 10 suspected Islamic Revolutionary Guard Corps Qods Force operatives. In the summer, authorities in Belgium, France, and Germany thwarted an Iranian plot to bomb a political rally near Paris, France. In October, an Iranian operative was arrested for planning an assassination in Denmark, and in December, Albania expelled two Iranian officials for plotting terrorist attacks. Furthermore, Tehran continued to allow an AQ facilitation network to operate in Iran, which sends fighters and money to conflict zones in Afghanistan and Syria, and it has extended sanctuary to AQ members residing in the country.

You notice what is absent? A list of specific attacks that caused actual casualties. Plans and plots are not the same as actions. If Iran’s malevolent influence was so powerful, we should be able to point to specific attacks and specific casualties. But you will not find those facts in the U.S. State Department report because they do not exist.

The statistical annex that details the attacks and the groups responsible reports the following:The Taliban was responsible for 8,509 deaths and 4,943 injuries, about 25 percent of the total casualties attributed to terrorism globally in 2018. With 647 terrorist attacks, ISIS was the next-most-active terrorist organization, responsible for 3,585 fatalities and 1,761 injuries. Having conducted 535 attacks, al-Shabaab was responsible for 2,062 deaths and 1,278 injuries. Boko Haram was among the top-five terrorist perpetrators, with 220 incidents, 1,311 deaths, and 927 injuries. It should be noted that local sources do not always differentiate between Boko Haram and ISIS-West Africa.

Not a single group linked to Iran or supported by Iran is identified. Look at the this table from the statistical annex: 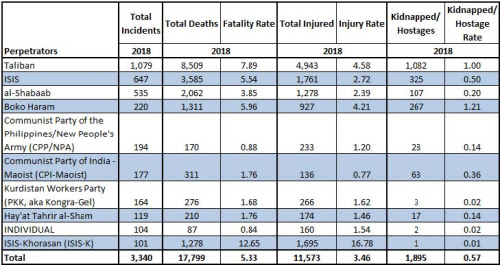 No Hezbollah and no Hamas. If a country is going to “sponsor” terrorism then we should expect to see terrorist attacks. The attacks that are taking place are predominantly from Sunni affiliated groups that have ties to Saudi Arabia, not Iran.

The State Department’s explanation about Iranian support for terrorism exposes what the real issue is (I am quoting the 2016 report but, if you read the 2017 or 2018 versions there is no significant difference):

Designated as a State Sponsor of Terrorism in 1984, Iran continued its terrorist-related activity in 2016, including support for Hizballah, Palestinian terrorist groups in Gaza, and various groups in Syria, Iraq, and throughout the Middle East. Iran used the Islamic Revolutionary Guard Corps‑Qods Force (IRGC-QF) to implement foreign policy goals, provide cover for intelligence operations, and create instability in the Middle East. Iran has acknowledged the involvement of the IRGC-QF in the conflicts in Iraq and Syria and the IRGC-QF is Iran’s primary mechanism for cultivating and supporting terrorists abroad.

In 2016, Iran supported various Iraqi Shia terrorist groups, including Kata’ib Hizballah, as part of an effort to fight ISIS in Iraq and bolster the Assad regime in Syria. Iran views the Assad regime in Syria as a crucial ally and Syria and Iraq as crucial routes to supply weapons to Hizballah, Iran’s primary terrorist partner. Iran has facilitated and coerced, through financial or residency enticements, primarily Shia fighters from Afghanistan and Pakistan to participate in the Assad regime’s brutal crackdown in Syria. Iranian-supported Shia militias in Iraq have committed serious human rights abuses against primarily Sunni civilians and Iranian forces have directly backed militia operations in Syria with armored vehicles, artillery, and drones.

The United States is upset with Iran because it has thwarted the U.S. covert action in Syria. It was the United States, along with the U.K., Saudi Arabia and Turkey, that helped ignite and escalate the civil war in Syria. Why? The Saudis and the Israelis were growing increasingly concerned in 2011 about Iran’s spreading influence in the region. And what enabled Iran to do that? We did. When the United States removed Saddam Hussein and destroyed the Baathist movement in Iraq, the Bush Administration thought it was a dandy idea to install Iraqi Shia in positions of leadership. Not one of the key policymakers on the U.S. side of the equation expressed any qualms about the fact that these Iraqi politicians and military personnel had longstanding relationships with Iran, which included financial support.

Iran also had a longstanding relationship with Syria. Barack Obama and Hillary Clinton decided that if we could eliminate Bashir Assad, the Syrian leader, then we would weaken Iran. This was a policy that many Republicans, most notably John McCain and Lindsey Graham, supported. But the scheme to weaken Iran backfired. Iran, along with Russia, came to the aid of the Government of Syria in full blown  counter-insurgency campaign. Iran, the Russians and the Syrian Government were fighting radical Sunni islamists, many of whom were funded by the Western alliance.

Iran’s military support for the Government of Syria clearly rankles U.S. policymakers, but it is not “terrorism.” It is pure counter insurgency.

Wikipedia offers additional evidence about the true nature of international terrorism. I have reviewed the lists of incidents, which includes the description of the attacks, the perpetrators and the number of casualties for 2016-2018. I have only been able to put the 2016 incidents into a spreadsheet. Here are the actual facts.

In 2016 there were seven terrorist attacks that caused at least 100 casualties. All were attributed to ISIL aka the Islamic State of Iraq and the Levant. Not one was linked to Iran or any group receiving financial support from Iran. There were a total of 1753 terrorist attacks and at least 15,993 deaths during 2016.

Here is the monthly breakdown for 2016:

January—105 terrorist attacks that caused the deaths of at least 1,351 people. There were no attacks linked to Kata’ib Hizballah, Hamas or Hezbollah. The seven attacks in Israel that left 7 dead were ascribed to a “Palestinian” lone-wolf.

February—72 attacks that left 1075 dead. There were no attacks linked to Kata’ib Hizballah, Hamas or Hezbollah. There were seven attacks and 3 dead attributed to “lone-wolf” Palestinians.

March—112 attacks leaving at least 778 dead. There were no attacks linked to Kata’ib Hizballah, Hamas or Hezbollah. There were 13 attacks in Israel identified as “lone-wolf” Palestinian. No significant Israeli casualties.

April—152 attacks that caused at least 1012 fatalities. There were no attacks linked to Kata’ib Hizballah, Hamas or Hezbollah.

May—202 attacks leaving at least 1600 dead. There were no attacks linked to Kata’ib Hizballah, Hamas or Hezbollah.

June—187 attacks and at least 1693 fatalities. There were no attacks linked to Kata’ib Hizballah, Hamas or Hezbollah.

July—187 attacks with at least 1684 deaths. There were no attacks linked to Kata’ib Hizballah, Hamas or Hezbollah.

August—139 terrorist attacks resulting in 1224 dead. There were no attacks linked to Kata’ib Hizballah, Hamas or Hezbollah.

September—128 terrorist attacks, which caused at least 849 fatalities. There were no attacks linked to Kata’ib Hizballah, Hamas or Hezbollah.

October—166 terrorist attacks and at least 2139 deaths. There were no attacks linked to Kata’ib Hizballah, Hamas or Hezbollah.

November—153 terrorist attacks that killed at least 1446. There were no attacks linked to Kata’ib Hizballah, Hamas or Hezbollah.

December—147 terrorist attacks, which resulted in at least 930 deaths. There were no attacks linked to Kata’ib Hizballah, Hamas or Hezbollah.

The U.S. State Department continues to insist that Iran is providing indirect support to Al Qaeda. That is pure nonsense. Iran is fighting and killing Al Qaeda forces inside Syria. They have no ideological affinity with Al Qaeda.

I wish the American people would take the time to be educated about the actual nature and extent of “international terrorism.” There was a time in the 1980s when Iran was very active in using terrorism as weapon to attack U.S. military and diplomatic targets. But even those attacks were focused in areas where Iran’s perceived national interests were at stake. I am not excusing nor endorsing their actions. But I do think we need to understand that terrorism usually has a context. It is not the actions of a mentally ill person who is angry and lashing out at the nearest available target. Those attacks were planned and very calculated.

The real issue that we should be focused on is whether or not we can halt the expansion of Iran’s influence in the Middle East. This remains a major concern for Israel and Saudi Arabia. U.S. policymakers are betting that isolating Iran diplomatically, ratcheting up economic pressure and using some military power will somehow energize the regime opposition and lead to the overthrow of the Mullahs. We tried that same policy with Cuba. It did not work there and will not likely work now in Iran.

Iran has options and is pursuing them aggressively. China and Russia, who are facing their own bullying from the United States, already are helping Iran tweak the the nose of the Trump Administration. In late December 2019, Iran, Russia and China carried out a joint military exercise. The Iranians were very clear about their view of this cooperation:

“The most important achievement of these drills . . . is this message that the Islamic republic of Iran cannot be isolated,” vice-admiral Gholamreza Tahani, a deputy naval commander, said. “These exercises show that relations between Iran, Russia and China have reached a new high level while this trend will continue in the coming years.”

The Trump Administration needs to stop with its infantile ranting and railing about Iran and terrorism. The actual issues surrounding Iran’s growing influence in the region have little to do with terrorism. Our policies and actions towards Iran are accelerating their cooperation with China and Russia, not diminishing it. I do not think that serves the longterm interests of the United States or our allies in the Middle East.

Brandon Smith, Why Are Globalists And Governments So Desperate For 100% Vaccination Rates?

Dave Hodges, The Delta Variant Is Being Used to Hide the Real Casualty Numbers of the Covid Vaccine

3 thoughts on “Larry C. Johnson, The Facts About Iran and Terrorism”