[Editor’s note: As we approach the 18th observance of 9/11, I am republishing several blogs to reaffirm what really happened, who was responsible and why. This blog originally appeared on 12 September 2017 under the title, “What Really Happened: America Nuked on 9/11”. I have added two videos, “9/11: Who was responsible and why”, and Christopher Bollyn exposes Alex Jones as a 9/11 Zionist Gatekeeper”,]

The Cambridge University Press journal, Behavioral and Brain Sciences, became an instant sensation by publishing target articles on specific, well-defined subjects and inviting experts from around the world to post critical commentaries about it, which has resulted in significant advances in research. During the 9/11 Truth Teleconference on 31 August 2016, I proposed that the new book about 9/11, 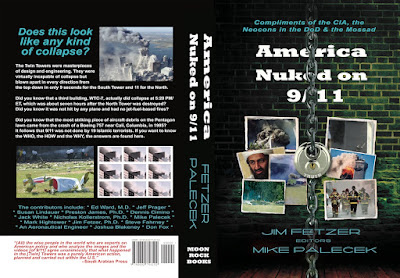 which has 15 contributors, might serve a similar purpose and thereby similarly significantly advance 9/11 research. Here are some of the important reasons to believe that we ought to adopt that suggestion.

The book is divided into 28 chapters, where the core falls into 8 sections that, in reverse order, focus upon “9/11 Limited Hangouts”, “The Myth of Nanothermite”, “The 9/11 Crash Sites”, “The Pentagon: What didn’t Happen”, “New York was Nuked on 9/11”, “What happened on 9/11”, and “9/11: Who was responsible and why”, Parts I and II, with three chapters each. It has a Preface and a Prologue as well as an Epilogue and an Afterword with an Index. Softcover, 458 pages, 338 photos, at moonrockbooks.com.

There are three major groups in 9/11 research–A&E911, which supports the use of nanothermite and focuses on Building 7; Judy Wood and DEWs, which promotes Directed Energy Weapons and no planes theory; and Scholars for 9/11 Truth, which advances the use of mini or micro nukes to blow apart the Twin Towers and likewise contends that none of the official 9/11 aircraft actually crashed on 9/11. The contributors explain why A&E911 is right about Building 7 but wrong about nanothermite and why Judy Wood and DEWs is right about no planes but wrong about DEWs.

Because the arguments and evidence presented are specific and detailed, the book facilitates a level of intellectual engagement that is missing from most discussions about 9/11. In relation to nanothermite, for example, three chapters explain that it is a law of materials science that, in order for an explosive to blow apart a material, it must have a detonation velocity equal to or greater than the speed of sound in that material. The speed of sound in concrete is 3,200 m/s; in steel, it is 6,100 m/s; but the highest detonation velocity attributed to nanothermite in the scientific literature is only 895 m/s. And the three chapters in the book that make these points were originally published in 2011–over 5 years ago!

That makes it obvious that those who want to defend the use of nanothermite in the destruction of the Twin Towers need to explain what else was used to bring that effect about. While it is certainly true that something else could have been added to make it explosive, A&E911 has been reluctant to say what that something else could have been. The same, of course, could be said of toothpaste, which is also non-explosive but could be made explosive by adding an explosive to it. After all these years, it is not unreasonable to expect that A&E911 should have an answer to that question. But that does not seem to be the case. Here is a report about the state of its research on 9/11, which has just appeared: 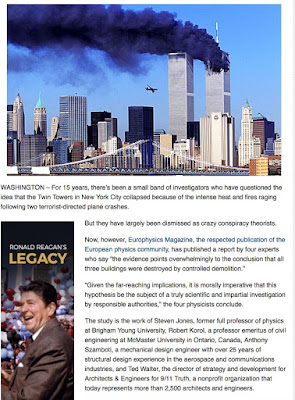 While the article presents proof that the “official narrative” of 9/11 cannot be sustained, it does not advance anything that has not been widely known with the 9/11 research community in the past. If you compare these propositions with my own “20 reasons the ‘official account’ of 9/11 is wrong”, for example, you can see that the latest from A&E911 does not significantly advance our knowledge and understanding beyond what was available then, where “20 reasons” was originally published on 9/11 of 2011! Surely we should be able to expect more from an organization that has such a high profile and tends to consume the attention of the public and media. Just compare their respective contents: 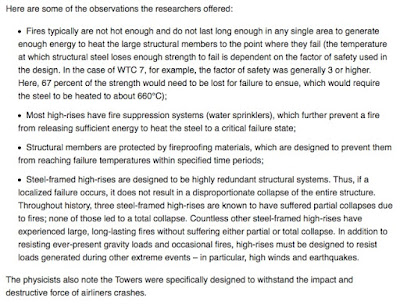 Indeed, some might be tempted to argue that the earlier article covered more ground that the latest from A&E. But Judy Wood and DEWs have not been doing any better. Consider, for example, that a review of her book, WHERE DID THE TOWERS GO? (2010), which I originally published on 20 May 2012, was subsequently downgraded from 5-star to 3-star on the basis of research presented during The Vancouver Hearings, which were held in June 2012. It has been subject to attack around 7,500 times now. But denouncing evidence of the use of nukes does not explain it away, where Judy has displayed the unscientific attitude of ignoring it. A scientist would instead take into account new evidence not previously considered and adapt their theory appropriately by accepting hypotheses that had been previously rejected, rejecting hypotheses previously accepted, leaving others in suspense: 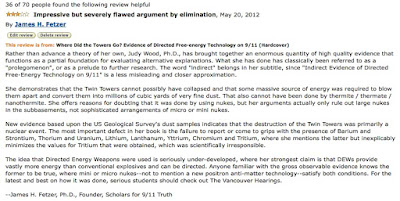 The point is that the specificity of the arguments presented in this new book make it possible to make advances by citing specific propositions that are laid out in detail with the evidence supporting them, which enables those who disagree to explain what they have wrong and how we know. Otherwise, we are left in the muddle of having to deal with distorted versions of those arguments, which do not come to grips with the evidence and leaving issues hanging. That was exhibited perfectly during the 9/11 Truth Teleconference, when Adam Ruff and Wayne Costa challenged my explanation of how we know that this was a nuclear event, which were nice illustrations of the point that I am making here.

Objections raised during the call

I observed that the conversion of material into very fine dust and the vaporization of 60-80,000 tons of steel are indicative of the use of nukes as well as the destruction of the buildings to or even below ground level. Wayne Costa replied that elements “that shouldn’t be there” does not take into account that some of those elements could have been present because of naturally occurring concentrations of those elements or from other sources. That sounded persuasive but, as the book explains, they would not have been there in the quantities discovered and the correlations between them had this not been a nuclear event. There would have been less likelihood of misunderstanding using the book as a basis.
Adam Ruff contended that there would have been no reason to use nukes because everything that was done could have been done with nanothermite and explosives. Ruff said that there was “a giant pile of debris”, but ignored the point that there was no massive stack of debris in the towers’ footprints! Comparisons with Building 7 are instructive here, because experience with controlled demolitions have shown that they leave a stack of debris equal to about 12% of their original heights. At 47 floors, WTC-7 left just that residue in a stack of debris 5.5 floors high. But that was not true of the Twin Towers, which, had they been demolished as Ruff suggests, should have left debris piles 14-15 floors high but did not:
Indeed, while it is appropriate to describe the destruction of WTC-7 as a “controlled demolition”, it is not appropriate to use the same phrase for the Twin Towers, which were “demolitions under control” but lacked the characteristics of controlled demolitions. The reason for having to have used a novel technique for their destruction appears to have been to protect the bathtub, which was an enormous dike within which the towers were constructed to protect them from Hudson River water. Had the bathtub been breeched, it would have flooded beneath lower Manhattan, the most valuable real estate in the world, including the subway and PATH train tunnels, which they wanted at all cost to avoid.

The use of mini or micro nukes, which have dialable radii and can be directed upward, means that the destruction of the Twin Towers qualified as the use of “Directed Energy Weapons”, which, according to Judy Wood, are devices that provide far more energy than conventional and can be directed. Set at 100′ in the core columns, they would have had a diameter of 200′ for buildings that were 208′ on a side. Their use enabled the destruction of both buildings from the top down in an effort to simulate collapse. But they were being blown apart in every direction and converted into millions of cubic yards of very fine dust. And this appears to be how it was done as the USGS dust studies substantiate. 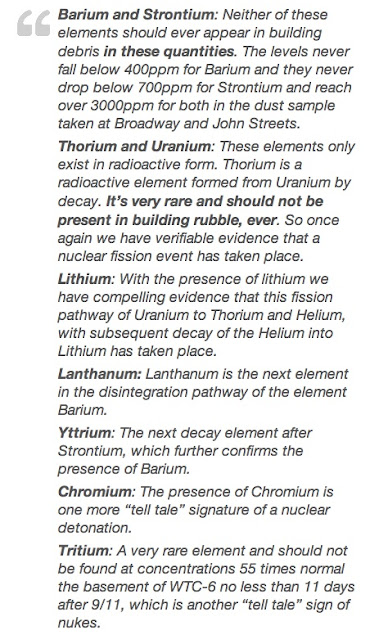 Other arguments could be made, of course, including that the final spire of the North Tower seems to run counter to the use of nukes. But even at Hiroshima, the scaffolding of a lone church remained after the enormous blast had done its damage. And these were mini or micro nukes, whose use has also been confirmed by the debilitating medical maladies incurred by first responders and residents of the area, which include non-Hodgkins lymphoma, leukemia, thyroid, pancreatic, brain, esophageal, prostate and blood and plasma cancers at rates far above normal, which Jeff Prager was among the first to point out and where recent estimates have placed the number affected at close to 70,000.
For those who regard characterizing A&E911 and Judy Wood and DEWs as “limited hangouts”, the argument is straightforward. We have three major problems to solve about 9/11: the WHO, the HOW and the WHY. Both of those organizations only address the HOW and refuse to explain the WHO or the WHY. That is simply absurd for 9/11 Truth organizations. Only Scholars for 9/11 Truth addresses all three. AMERICA NUKED ON 9/11: Compliments of the CIA, the Neocons in the DOD and the Mossad (2016) lays out the evidence in detail. But we make no claims to infallibility–and the best test of the validity of our case is critical attempts to refute it, which can be accomplished if we make this book the target for scrutiny and criticism and thereby advance the cause of exposing 9/11 Truth.
Jim Fetzer, a former Marine Corps officer, is McKnight Professor Emeritus at the University of Minnesota Duluth and the founder of Scholars for 9/11 Truth.
Please follow and like us:

2 thoughts on “NEVER FORGET: What Really Happened on 9/11: Who was Responsible and Why”