By MARLENE LENTHANG FOR DAILYMAIL.COM

Despite the high stakes and anticipation ahead of Robert Mueller’s testimony on Wednesday, he gave a flat, lackluster performance before lawmakers and dodged probe questions nearly 200 times.

Mueller took to the stand to provide insight into his two-year investigation into Russian meddling in the 2016 presidential election, but refused to provide any additional details beyond the 448-page report he published in April.

The former Special Counsel was tight-lipped in his testimony and seemed to struggle to understand or hear the lawmakers’ questions, often asking officials to repeat their inquiries, or brushed their questions aside and asked them to consult his report.

He also dodged questions saying he ‘can’t’ or ‘won’t’ get into the substance of the inquiry a total of 99 times during his testimony.

Robert Mueller deflected lawmakers’ questions 198 times during his testimony before House lawmakers on Wednesday where he asked Congress members to repeat their questions multiple times and often excused himself from answering, claiming the inquiries were beyond his ‘purview’

In total he deflected answering questions a whopping 198 times, according to an NBC tally.

Fed up Ohio Republican Rep. Jim Jordan said, ‘A lot of things you can’t get into’ after Mueller said six variations of ‘I can’t get into that’ responses.

In his testimony Mueller said that his investigation did not exonerate President Donald Trump of wrongdoing and that the president could be charged when he left office.

He said that his probe found Russia worked to boost Trump’s election in a ‘sweeping and systematic’ fashion.

Mueller dodged questions saying he ‘can’t’ or ‘won’t’ get into the substance of the inquiry a total of 99 times during his testimony.

Number of times he asked lawmakers to repeat their questions: 30

Number of times he referred lawmakers back to his report: 34

Number of times Mueller claimed questions were beyond his ‘purview: 10

Number of times Mueller said he ‘can’t’ or ‘won’t’ get into the substance of the question: 99

However, his team never determined if Trump committed a crime.

Mueller revealed he decided against charging Trump for the sake of finishing the investigation and based off internal guidelines.

‘Based on Justice Department policy and principles of fairness, we decided we would not make a determination as to whether the president committed a crime,’ Mueller said, referring to a policy set by the department’s Office of Legal Counsel against indicting a president in office.

‘Over the course of my career, I’ve seen a number of challenges to our democracy,’ Mueller said before the House Intelligence Committee. ‘The Russian government’s effort to interfere in our election is among the most serious.’ 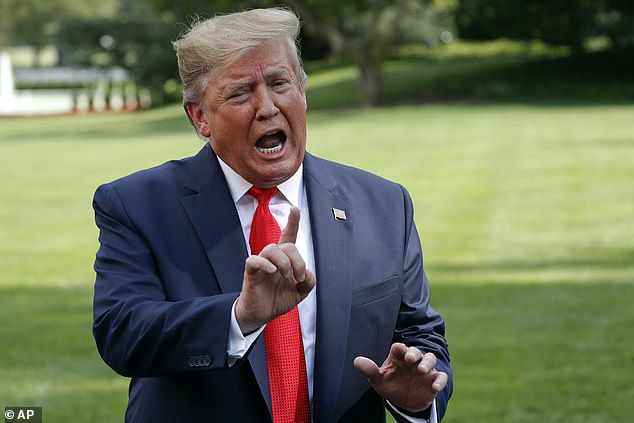 ‘They’re doing it as we sit here. And they expect to do it during the next campaign,’ he added.

When his testimony wrapped up, President Trump took to twitter to trash Mueller’s performance saying he did a ‘horrible job’.

‘Obviously he did very poorly today. I don’t think there’s anybody who would say he did well,’ said Trump, adding he did a ‘poor job.’

Below are the 10 most important takeaways gleaned from Robert Mueller’s testimony before the House Judiciary and Intelligence Committees on Wednesday.

Mueller said all he wanted to say in his report

When Mueller finally agreed to testify before Congress – after more than two years of silence about the Russia investigation – the special counsel said he ‘would not provide information beyond that which is already public’ in the report published in April.

He stuck to that promise throughout Wednesday’s hearing, declining or deferring nearly 200 questions from committee members.

Mueller’s reasons for not answering included not wanting to speculate, being unable to detail internal Justice Department deliberations and being under orders not to broach specific topics.

The special counsel addressed why Trump wasn’t interviewed during the two-year-long investigation when New York Democratic Rep Sean Maloney asked him: ‘Why didn’t you subpoena the president?’

Trump’s legal team had refused to have him be interviewed in the probe because they felt such a meeting would amount to a ‘perjury trap’.

Before Congress Mueller stated that his team had ‘little success’ when pushing for an interview for over a year and decided that they didn’t want to delay the investigation with a lengthy court battle.

‘We did not want to exercise the subpoena power because of the necessity of expediting the end of the investigation,’ he said, adding that no one at the Justice Department pressured him to finish the probe.

Mueller acknowledged that Trump’s written answers to questions about possible conspiracy with Russia were ‘not as useful as the interview would be’.

Trump was not exonerated by the Russia investigation

‘No,’ Mueller stated without hesitation.

That goes against the president’s repeated claims that the probe proved there was ‘no obstruction, no collusion’.

The Mueller Hearings were an unmitigated disaster for Democrats

While the majority of his answers were straightforward and technical, Mueller struggled when questioned about why he did not indict the president.

During an exchanged with California Democratic Rep Ted Lieu, Mueller stated that the reason he did not even consider indicting Trump on obstruction charges was because of guidance from the DOJ’s Office of Legal Counsel that a sitting president cannot be indicted.

That goes against assertions by Attorney General William Barr, who has repeatedly said the OLC’s opinion was not the only reason Mueller did not indict Trump.

Arizona Republican Rep Debbie Lesko asked Mueller to clarify that contradiction, at which point he said he ‘would have to look closer at it’.

He later conceded that he had misspoken when he characterized the OLC’s guidance to Lieu.

‘We did not reach a determination as to whether the President committed a crime,’ he said.

‘Based on Justice Department policy and principles of fairness, we decided we would not make a determination as to whether the president committed a crime.’

Mueller was much less steady than in previous hearings

At times, Mueller, 74, stumbled during answers, asking fast-talking lawmakers to repeat page citations and repeat their questions. He sometimes had to scan the hearing room to locate questioners.

Although his stock answer was to say issues were beyond the purview of his mandate, he also appeared not to recall specific information at times.

‘Where are you reading from?’ he asked one member, Rep. James Sensenbrenner. ‘I am reading from my question,’ the Wisconsin Republican lawmaker told him.

Under questioning by Republican Rep Steve Chabot, Mueller didn’t show immediate familiarity with political intelligence firm Fusion GPS, a key player in the trail of the Steele Dossier, and a fixture of attention of President Trump and GOP critics of the Mueller probe.

Viewers reacting on social media called out Mueller’s unsteadiness early on, remarking that he was acting ‘like a confused old man’.

Some said the wobbly performance could be a delaying tactic on the part of the special counsel to frustrate Republican committee members determined to discredit findings that are damaging to Trump.

After saying that he couldn’t be bothered to watch Mueller’s testimony, President Trump made it clear that he was tuned in as he tweeted multiple reactions to the proceedings on Wednesday.

‘I’m not going to be watching Mueller because you can’t take all those bites out of the apple,’ Trump told reporters in the Oval Office on Monday. ‘We had no collusion, no obstruction.’

Before the hearing even kicked off Trump had posted seven tweets about the hearing, echoing his go-to attacks on ‘Mueller & his band of 18 Angry Democrats’.

Over the next eight hours tweeted and retweeted 14 posts about Mueller’s testimony, including multiple videos of Republican lawmakers grilling the special counsel.

‘TRUTH IS A FORCE OF NATURE!’ he declared just after 2.30pm.

Republicans probed Mueller’s professional links with Trump in an attempt to show he may have had a reason to be biased against the president – specifically questioning whether he was turned down for the FBI director position the day before being tapped to lead the Russia investigation.

Trump gave his version of events on Wednesday morning, tweeting: ‘It has been reported that Robert Mueller is saying that he did not apply and interview for the job of FBI Director (and get turned down) the day before he was wrongfully appointed Special Counsel.

‘Hope he doesn’t say that under oath in that we have numerous witnesses to the interview, including the Vice President of the United States!’

Gohmert asked Mueller about a meeting he had with Trump the day before the special counsel appointment and contended that it was a job interview for the FBI director slot.

Mueller stated that he was not interviewed ‘as a candidate’ for the position.

The special counsel was calm and composed throughout the proceedings, save for one moment when Florida Republican Rep Greg Steube decried the political affiliations of the lawyers on his team.

Mueller said never in his 25 years in his position had he felt the need to ask the people he works with about their political affiliation.

Rep Gohmert also called Mueller’s hiring practices into question, particularly his appointment of FBI agent Peter Strzok – who was later removed from the probe after he was found to have sent anti-Trump text messages to a woman he was involved with.

Mueller said he did not know of Strzok’s disdain for Trump before the probe started and learned about it in the summer of 2017, several months into the investigation.

Republicans committee members tried both the blast the origins of the Russia probe and potentially establish a record that might play out in an ongoing investigation overseen by Attorney General William Barr.

‘Before you arrested [Trump campaign foreign policy aide] George Papadopoulos in July of 2017, he was given $10,000 in ash in Israel. Do you know who gave him that cash?’ California Rep Devin Nunes asked Mueller.

‘Again, that’s outside our … questions such as that should go to the FBI or the department,’ said Mueller.

‘But it involved your investigation,’ said Nunes.

‘It involved persons involved in my investigation,’ said Mueller.

Trump lawyer Jay Sekulow released a statement saying: ‘This morning’s testimony exposed the troubling deficiencies of the Special Counsel’s investigation. The testimony revealed that this probe was conducted by a small group of politically-biased prosecutors who, as hard as they tried, were unable to establish either obstruction, conspiracy, or collusion between the Trump campaign and Russia. It is also clear that the Special Counsel conducted his two-year investigation unimpeded. The American people understand that this issue is over. They also understand that the case is closed.’

Democrats tried to breathe life into a dense, technical report

The Democrats, who hold a majority on both committees, made a concerted effort to present the investigation’s findings in a more provocative and damning light than they had been in the dense, 337-page report.

‘Your investigation determined that the Trump campaign — including Trump himself — knew that a foreign power was intervening in our election and welcomed it, built Russian meddling into their strategy, and used it,’ California Rep Adam Schiff, the House Intelligence Committee chair, said when the afternoon portion began.

‘Disloyalty to country. Those are strong words, but how else are we to describe a presidential campaign which did not inform the authorities of a foreign offer of dirt on their opponent, which did not publicly shun it, or turn it away, but which instead invited it, encouraged it, and made full use of it?’ Schiff continued.

‘That disloyalty may not have been criminal. Constrained by uncooperative witnesses, the destruction of documents and the use of encrypted communications, your team was not able to establish each of the elements of the crime of conspiracy beyond a reasonable doubt, so not a provable crime, in any event’, he added.

However, a levelheaded Mueller didn’t play along, making for a rather mundane hearing.

Reporting by Megan Sheets for DailyMail.com

4 thoughts on “Dodgy Bobby: Mueller deflected lawmaker questions 198 times during his testimony on the Russia probe”