President Donald Trump seems to be making Americans hate the empire again, by embracing war – or maybe only pretending to do so – against Iran, Venezuela, Cuba, North Korea and who knows where else.

One thing to keep in mind about Trump is that his critics tend to instinctively oppose anything he is for, regardless of what they may have thought in the past. 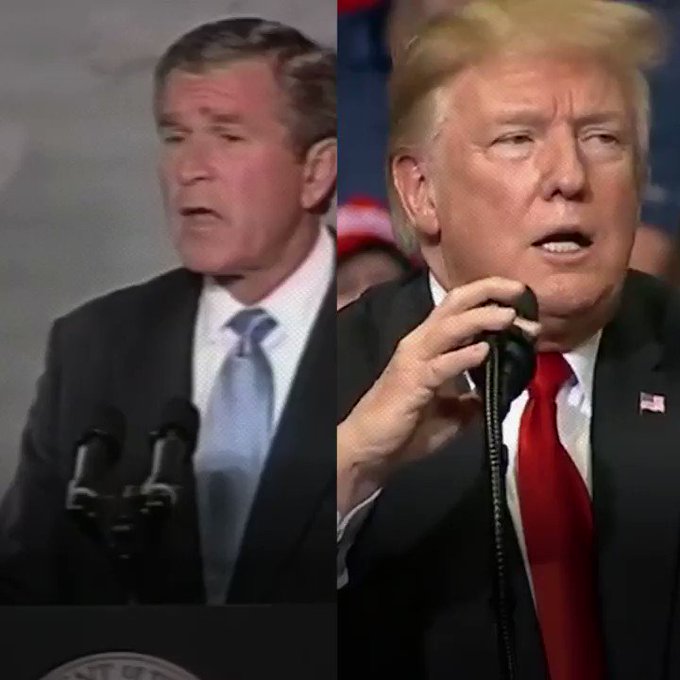 Trump is pushing us toward the brink of war with Iran — and it all sounds alarmingly familiar.

1,118 people are talking about this

The twist? It was produced by MoveOn.org, a Democrat activist group set up in 1998 to oppose the impeachment of President Bill Clinton, and bankrolled by George Soros. These are the same Democrats, mind, who did nothing to oppose Clinton’s 1999 war on Yugoslavia, Obama’s 2011 intervention in Libya, or the actual Iraq War for that matter. But now they warn against war with Iran – because Orange Man Bad!

Recall, however, that Trump himself has repeatedly denounced the Iraq War – and indeed, used that to bludgeon Jeb Bush during the 2015 Republican primaries, obliterating the candidate the establishment and media thought would be the front-runner. Then, in 2016, Trump delivered a blistering foreign policy speech denouncing nation-building and wars of conquest around the globe in favor of “America first.”

Oh, the establishment in Washington wailed and gnashed their teeth, but took comfort in the knowledge that Trump could never, ever possibly be elected. Every single media outlet told them so, after all. And then it happened anyway.

When the unthinkable happened later that year, the establishment launched every possible effort to “resist” and sabotage Trump’s agenda, primarily by the means of the ‘Russiagate’ conspiracy theory.

The very “Swamp” in Washington that Trump vowed to drain went to war against anyone who might actually do it – from General Michael Flynn onward – while steering clear of neocon cadres like Pompeo, Bolton, Kurt Volker or Elliott Abrams that ended up working for Trump. Have you seen any of them accosted at a restaurant, or accused of a scandal in the Washington Post? Of course not.

This is one possible explanation for why Trump ended up embracing the neocons: they are the only ones actually willing to work in his administration. Another possibility, however, is that Trump is aware the very best way to make the establishment hate a position is for him to embrace it.

ALSO ON RT.COM‘Lured into war’? Iranian FM warns Trump could be duped into crisis by hawkish ‘B-team’Justin Raimondo of Antiwar.com, who has watched US foreign policy closely for the past 25 years, is convinced that Trump has embraced the neocons in order to set them up for a defeat, letting Pompeo and Bolton – along with others – freely indulge their fantasies of regime change in Caracas or a counter-revolution in Tehran, as a way to prove his point that the American Empire he condemned in 2016 is untenable.

“We can see the knife go in as this whole scenario plays out,” Raimondo wrote in February, as Trump embraced regime change in Venezuela. Perhaps that sounds a bit too ‘Game of Thrones’, but look at what has actually happened since: each attempt by US-backed ‘interim president’ Juan Guaido to take power has failed more spectacularly than the previous one.

Also note that one of the loudest voices for regime change in Venezuela and a harder line on Cuba, Senator Marco Rubio (R-Florida) repaid Trump by voting against his declaration of emergency on the US-Mexico border, invoked to overcome Democrat opposition to the border wall.

I do question Bolton and his motives, and I do NOT want any more wars. I struggle with the fact that Trump has Bolton, a well known NeoCon, in this position.

Bolton is a menace and Trump supporters who claim they don’t want any new wars or unnecessary conflict abroad should be particularly incensed that he was appointed and commands this level of influence in the Administration https://twitter.com/EliClifton/status/1125444731956109312 …

16 people are talking about this

Recall how the very same media outlets that hounded Trump with the now-debunked ‘Russiagate’ conspiracy sang praises to the “beauty of our weapons” when the president fired off some missiles into Syria, to ensure he stays the “Assad must go” course.

While the State Department rhetoric on that has not changed, Trump did order US troops out of Syria – and that actually happened, more or less, suggesting that Washington has tacitly given up on regime change in Damascus.

Of course, this could all be Q-level speculation about “4-D chess.” It is entirely possible that Trump has simply been seduced by the neocon siren call of perpetual war and the American Empire, despite consistently expressed beliefs to the contrary over a long period of time. If there is one thing that’s been absolutely certain about the Trump presidency so far, it’s that the only way to know for sure is to see what happens.

2 thoughts on “RT, Trump Strangelove: Or how America learned to worry and hate Empire”