While we are still able to as questions was the New Zealand Mosque shooting real or a production? Max Igan and Dr. James Fetzer debated that issue.  Dr. Jim Fetzer maintains that the shooting was fake but Max Igan believes that it was real. Here is a link to their exchange:

Since the Sandy Hook drill, it has become more apparent to Americans that they are being deceived by their own government. The agenda becomes clearer each day, which is not only to disarm the United State along with other countries like New Zealand, but also to stop the public from questioning their government by making the average citizen look crazy. For those doing any research whatsoever, it is no stretch to conclude that the majority of these shootings were staged and are fake. New Zealand was no exception as will be demonstrated here.

Max Argument #1: The bullet hole in the windshield

Max Igan challenges Jim about the shooting, where he offers four reasons he believes that the shooting was real. He poses them to Jim as questions, the first in regard to a picture which he claims shows a bullet hole in the front windshield of the car the shooter was driving. Here is the picture of the bullet hole: 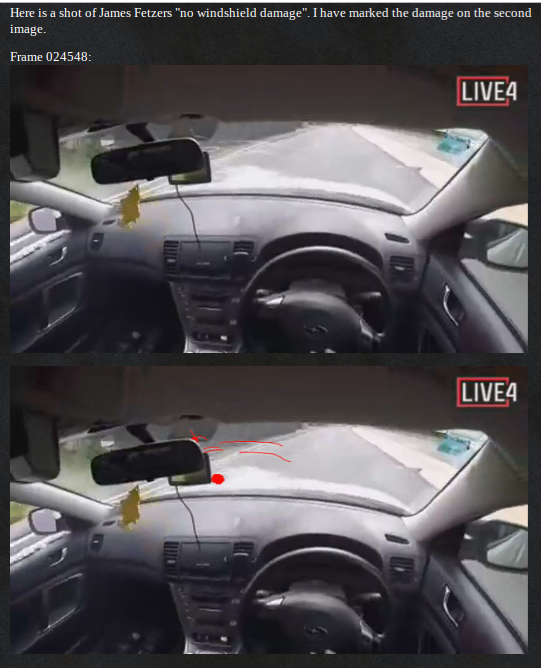 The picture at the top is of the “bullet hole” and the picture below shows in red its purported location. Now I do not know how anyone can or cannot see this bullet hole, so I used Forensically–created by Jonas Wagner, which is online–to find the bullet hole. The Forensically program should be looked at as a kind of magnifying glass. It helps to see the small details that would be hidden in the photo. Just like a magnifying glass, it cannot tell truth from a lie or good from evil, but it can help uncover the truth. This is what I found:

The Luminance Gradient tool analyses the changes in brightness along the x and y axis of the image. It’s obvious use is to look at how different features of an image are illuminated in order to find anomalies, should any exist. Parts of the image at a similar angle (to the light source) and under similar illumination, for example, ought to have similar color. Another use is to check edges. Similar edges should have similar gradients. If the gradients of one edge are significantly sharper than the rest, it’s a sign that the image could have been copy-pasted. It also reveals noise and compression artifacts quite well.

The pink color highlighted above is something that was added adjacent to the supposed bullet hole. That raises the obvious question, Why would something be added into an image right next to a bullet hole? Also, the string hanging from the object in question goes nowhere. Was it to take the borders of the inserted object to form a circle that looks like a bullet hole? Just the mere fact that they added an object in right next to the bullet hole is suspicious.

The Noise Analysis tool applied to the picture above functions as a reverse denoising algorithm. Rather than removing the noise, it removes the rest of the image. It can be used to display manipulations photographs such as airbrushing, deformations, warping and perspective-corrective cloning. What this shows is the entire outline of the front of the car has been manipulated. Everything in the white outline, along with the other colors, has been fixed. The entire photograph has been altered, when you look at the definition of what we are viewing.

One of the most convincing proofs of fakery is that the shell casings ejected from one of the shooter’s weapons seem to disappear in air. They do not hit the ground and cannot be heard bouncing around. But Max Igan says they are there and only appear not to be as a function of bandwidth. Let’s take a look:

The next picture shows the shell casings that Max Igan contends can be seen falling to the ground in the picture, when bandwidth considerations are factored in: 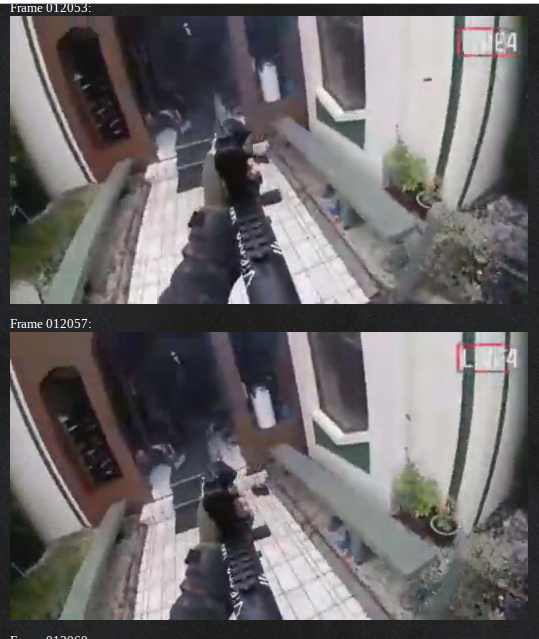 The casing can be seen in these two frames on the upper-right section of the frame. Now let’s take a closer look at the casing itself:

The last few frames show that the shell casing was added in and looks like a black blob. It does not have the form of a bona fide shell casing and has instead been drawn drawn in. Max Igan had to dispute the video that makes the case for fakery virtually indisputable. Take a close look and notice the arrow drawn on the weapon to identify the purported location for shell ejections to be added in.

Max Argument #3: Bodies before and after having been shot

Next image is some of the victims allegedly before and after they have been shot: 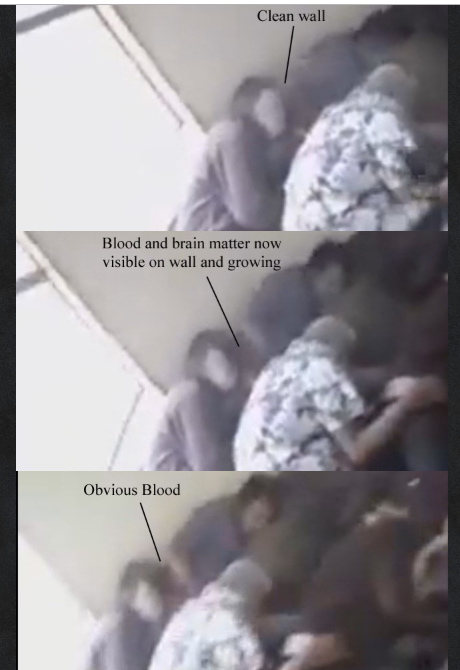 The Forensically tool was not needed with this image due to the obvious altered elements of the picture. Anyone can see that where Max Igan claims there is no blood before but blood after the shooting is not blood. The lady with the blood is lying on the bottom half of the torso. It was altered and blurred in the first pic and cleared up in the last two frames. The poor quality of the images are designed to hide this fact. This is suspicious along with the fact the victims have no faces.

Below is the analysis of the image above that proves it, too, was photoshopped:

Yet another image in this shooting is a photograph of the car in question in which the license plate number can be identified:

It looks completely normal until it is put under Forensically scrutiny:

Once again the noise analysis tool was used showing that they did not even photoshop the entire picture. As you can see only a portion of the image was photoshopped. The section that was photoshopped shows the outline of the entire image was drawn in. The man was drawn in along with a lot of other detail,  which leads to the conclusion that the license plate number that was supposedly found was also drawn in. And that, in turn, suggests that the Deep State not only controls the mainstream media but key players within the alt.media as well.

To conclude, these images were altered. Therefore, the images Max Igan bases his argument on have all been manufactured. This shooting, like most shootings, was staged to fulfill the NWO agenda to completely control the people of the world. Wake up your friends, family, and neighbors. Share everything you can with friends online and do not let them get away with censorship! Check out the new social media sites that do not censor so you can determine what is real and what is not. This is a fight to which we all need to lend our support before it’s too late.

22 thoughts on “Mona Alexis Pressley, Does Max Igan have it right? Was the Christchurch shooting real?”