Breaking News
Brandon Smith, Why Are Globalists And Governments So Desperate For 100% Vaccination Rates?
Dave Hodges, The Delta Variant Is Being Used to Hide the Real Casualty Numbers of the Covid Vaccine
Jim Fetzer, The $33,000,000 Sandy Hook Settlement is Insurance Fraud
Stephanie Sledge,  REMINGTON TAKES FALL: SELLS OUT AMERICAN GUN OWNERS & SETTLES SANDY HOOK FOR $33 MILLION
As A ‘Big Pharma’ Induced Medical Catastrophe Unfolds Across America, Radical Leftist Threatens To ‘Treat Republicans Like Nazis Did The Jews’ And ‘Be As Murderous As Possible’
02 Aug, 2021
Skip to content

[Editor’s note: The book, Nobody Died at Sandy Hook (2015), went on sale on 22 October 2015 and was banned by amazon.com on 19 November 2015. This review is dated 24 November 2015, by Julie Wilson. It’s an extremely good review. It comes from a web site that is named, “hoax.news”, which appears to be devoted to exposing hoaxes, where Sandy Hook is a prime example. Great work, Julie!]

Were 20 school children and six adult staff members really massacred at Sandy Hook Elementary school in December 2012? Jim Fetzer Ph.D. says “no,” and explains why in his new book titled Nobody Died at Sandy Hook – which was suddenly pulled from Amazon’s online store just one month after it was approved for publishing, despite the book’s soaring popularity. It had already sold 500 copies in less than a month and was quickly heading towards the “best sellers” list, wrote Fetzer in his online blog, “Exposing Falsehoods and Revealing Truths.”

Fetzer, a former Marine Corps officer and McKnight Professor Emeritus at the University of Minnesota Duluth who’s published extensively on a variety of topics, including cognitive science, evolution, mentality and scientific knowledge, believes the Sandy Hook Elementary school shooting was an “elaborate psy-op to promote gun control” and that no children were in fact killed that day.

Supported by documentation, Fetzer argues that Sandy Hook Elementary, located in Newtown, Connecticut, was not even an operational school at the time of the shooting and hadn’t been since its closure in 2008 due to its “deplorable physical condition (both inside and out)” and its noncompliance with federal and state laws. In 2002, engineering consultants recommended the school district allot $4.5 million to “upgrade and renovate its heating and ventilation system” over a nine-month period beginning in 2010.

Sandy Hook Elementary not fit for students, falling apart since 2002

Two years later, the Newtown Board of Education was told the school, built in 1956, had a severely dilapidated roof, and in 2008, learned the facility was contaminated with asbestos, lead and PCBs under its foundation. Ten months after the shooting, the city approved a referendum to demolish and rebuild a brand new K-4 elementary school using a $50 million state grant.

Those hired to demolish the school were required to sign lifetime gag orders prohibiting them from discussing what they saw or didn’t see, writes Fetzer, adding:

If the city already knew in 2008 that the school was contaminated with asbestos and, in 2013, used the contamination to justify tearing it down, why would the same asbestos-contaminated school be safe for children and teachers to inhabit from 2008 through 2012? If SHES had remained open, wouldn’t the school district be sued for endangering public health?

Connecticut Gov. Dan Malloy said during a press conference on the day of the shooting that he had been told something like this might happen. After doing some digging, Fetzer learned that about three weeks before the alleged shooting, Attorney General Eric Holder met with Gov. Malloy to discuss “Operation Longevity,” a comprehensive initiative to reduce gun violence in the state’s major cities. Coincidental timing? Perhaps.

Nobody Died at Sandy Hook presents 50 photos showing “the preparation of the Lanza home as a prop and another 50 documenting the refurbishing of the school as a stage.” The book describes the scene of the shooting as a stage fully equipped with Port-a-Potties, a sign reading “Everyone must check in,” boxes of bottled water, pizza cartons and parents bringing their children to what was portrayed as a school shooting. 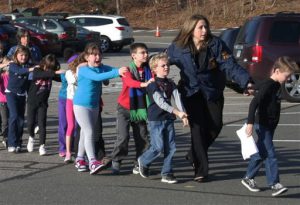 Fetzer points out that there were reportedly 489 students present at the school that day, minus 20 who were killed; however, there’s no evidence of staff evacuating the 469 remaining students. The  “iconic” picture (featured to the right) is the only documentation illustrating what would’ve been a fairly massive evacuation.

More oddities surrounding the Sandy Hook Elementary school shooting include parents expressing no grief, donation websites created prior to the massacre, lack of emergency medical helicopters, ambulances forced to set up shop at the fire station located several hundred feet away and the government’s refusal to release the victims’ death certificates and burial sites.

Supporting the theory that the school had been closed since 2008, photographs illustrate hallways and classrooms stored with junk (furniture and office supplies), lack of handicap parking spaces and the absence of Internet activity from 2008-2012.

Using the Internet Archive’s Wayback Machine, Fetzer and his colleagues discovered the facility had NO Internet activity since 2008 when it was found to be contaminated with asbestos.

According to Dr. Carver and State Police, Lanza shot each victim between 3 and 11 times during a 5 to 7 minute span. If one is to average this out to 7 bullets per individual—excluding misses—Lanza shot 182 times, or once every two seconds. Yet, according to the official story, Lanza was the sole assassin and armed with only one weapon. Thus, if misses and changing the gun’s 30-shot magazine at least 6 times are added to the equation, Lanza must have been averaging about one shot per second—extremely skilled use of a single firearm for a young man with absolutely no military training and who was on the verge of being institutionalized.

So, somewhere between five and seven minutes, Lanza was able to kill 26 people including himself – a 96 percent kill ratio – “which is unheard-of-accuracy even among experienced marksmen.” Professional military investigator and ballistics expert Mike Powers says the entire scenario is physically impossible, adding that Lanza’s slight build (112 lbs) would make it extremely difficult, if not impossible, to carry the “heavy, bulky weapons and ammunition” he was reported to have used.

In an interview with Joyce Riley on the Power Hour, Powers said “that Lanza could not have fired so many times continuously without destabilizing himself from the intense noise from the Bushmaster. As a novice, he could not have shot an AR–15 with such speed and accuracy, supposedly changing magazines 4–5 times without a stoppage.”

For more information on the inconsistencies surrounding the Sandy Hook shooting, check out Fetzer’s book, which is available in full here[PDF].

Brandon Smith, Why Are Globalists And Governments So Desperate For 100% Vaccination Rates?

Dave Hodges, The Delta Variant Is Being Used to Hide the Real Casualty Numbers of the Covid Vaccine

14 thoughts on “The Sandy Hook conspiracy: School was shut down due to asbestos contamination 4 years before alleged shooting, new book reveals”