“It was like the folks in Paradise CA fire were in a high rise with bars on the windows and their doors were bolted shut from the outside!”

Many throughout the Patriot Movement have heard the statement: “You don’t know what you don’t know!”

Well, in the case of Operation Torch California many good folks in California are willfully choosing to not know what they don’t know about these geoengineered catastrophic firestorms.  The true causes and intent are just too outrageous for them to comprehend.

For those uninitiated in this highly calculated CA genocide, please see the 2-part series below.

However, this is NOT the time for folks to deny the grim realities, especially for those who were burned out but thankfully still alive.

This is NOT the time to be stymied by the hard truths, no matter how horrific the back story may be.  If you’re reading this post you are an obvious truth seeker; however, many of those adversely impacted by these California arson fires are not yet awake and desperately need our help.

And, “YES!” the true reasons for these geoengineered conflagrations is inconceivably horrific.  In point of fact, these firestorms were deliberately started and spread by perpetrators who wanted to produce mass death and destruction.

Paradise residents set up for a terrifying immolation

“Here’s what really happened in Paradise.  The Rothschild Crime Syndicate
wanted the land for gold, mineral rights and UN agenda implementation.
They had to scare the residents off the land—FOREVER!  This is why their
arsonists set up the crime scene in advance so that no one could even get out.
It was like the folks in Paradise CA fire were in a high-rise with bars on the
windows and their doors were bolted shut from the outside!  This was
nothing short of premeditated genocide … as it is twice a year whenever
manmade wildfires are stealthily exacerbated ON PURPOSE.  The
International Banking Cartel is engaged in a massive land heist around
the world wherever gold deposits abound in order to fulfill the numerous
and unprecedented gold repatriation requests being made by nations large
and small to the US, UK and France.”

Here is some conclusive proof that people and animals died terrible deaths, many of the needlessly.  The photos below were taken from an important submission by a Paradise CA fire victim who lost everything. See: ELABORATE ARSON SCHEME EXPOSED: The Pillage and Plunder Of Paradise CA 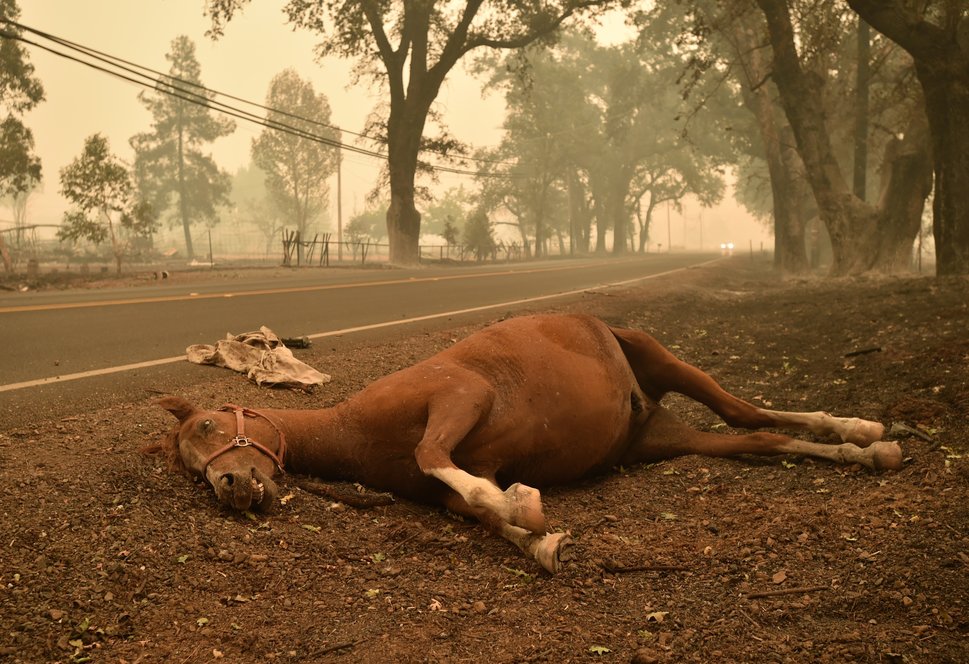 A dead horse lays on the side of a road killed by the fires in Middletown, California (Photo credit: Josh Edelson/AFP/Getty Images)

It’s entirely true that OPERATION TORCH CALIFORNIA IS NOTHING SHORT OF GENOCIDE  And that only We the People can put a stop to it.

What we are, and have been, dealing with in California over the past few years is a conspiracy to commit genocide and mass destruction in targeted areas that have been coveted by the New World Order globalist cabal.

SOTN Editor’s Note:
People, this story is the biggest story of the year—bar none.

It’s so HUGE that it has the potential to take down the NWO cabal—FOR GOOD!

SOTN has received much evidence that proves the many shocking statements made in this short “citizen’s indictment”.  Yes, this CA wildfire season was used as a means to commit genocide.

When all the hard evidence is properly collated and made public, the Deep State perps will be identified and prosecuted.

In the meantime please continue to send any hard, anecdotal or circumstantial evidence to this email: SOTNeditor1@gmail.com

The following video dissects the California crime scene in a rather comprehensive way that deconstructs the whole furtive plot: Anatomy of the Arson Fire Attack on California (Video)

Efforts to help the people of California, many of whom are desperately in need of assistance, will serve to aid populations everywhere that are under similar assaults.

This article is still in a rudimentary stage of development.   There’s LOTs to see here folks.  So much, in fact, that we believe the California genocide will be the final undoing of the cabal.

What they really do throughout California on a annual basis (twice a year during the 2 wildfire seasons) is outright mass murder and destruction.  It really does appear that they went way too far with their pyro-crime spree in 2018.  The abundance of hard evidence shows the globalists to be genocidal maniacs who will do anything to steal the land and mineral rights whenever they want to.

Stay tuned for the final draft of this exposé on the premeditated California genocide of 2018.  And remember what our fellow Americans just experienced: “It was like the folks in the Paradise CA fire were in a high rise with bars on the windows and their doors were bolted shut from the outside!”

How these ‘wildfires’ completely burned down houses but spared the trees and bushes next to the same homes is quite the mystery.

Editor’s note: Plus the path of the fires appears to approximate the path of high-speed rail planned for the future:

Petitioning Government or Courts Will Never Result in Gaining Freedom: Only Mass Disobedience Can Prevail

Petitioning Government or Courts Will Never Result in Gaining Freedom: Only Mass Disobedience Can Prevail