“This globalist attack in Tallahassee was nothing but a “November jolt”.  The floundering campaign of Democrat Andrew Gillum is desperate. The MSM is covering up the expanding FBI investigation into the mayor’s crime spree and municipal corruption.  Gillum’s bagmen and handlers — Soros and Steyer — will not let their investment in Gillum go to waste. This mass shooting was carried out by Deep State primarily as a distraction to assist Gillum.  But it was also engineered as another fake ‘white male terror event’ to fearmonger the Left against the Patriot Movement.  The globalists really are afraid of a heavily armed patriot movement.”

As if he was prompted (read: triggered), an armed white military veteran allegedly walked into a yoga studio in Tallahassee Florida … and proceeded to shoot people for no apparent reason.

It’s as though this act of domestic terrorism was committed on demand in order to underscore the strident “anti-white male” message that CNN regularly delivers to its audience through anchors such as Don Lemon.

Look at how the top 5 headlines on Saturday, Nov. 3 (see screenshot below), the morning after the alleged shooting, are all dedicated to this false flag shooting. 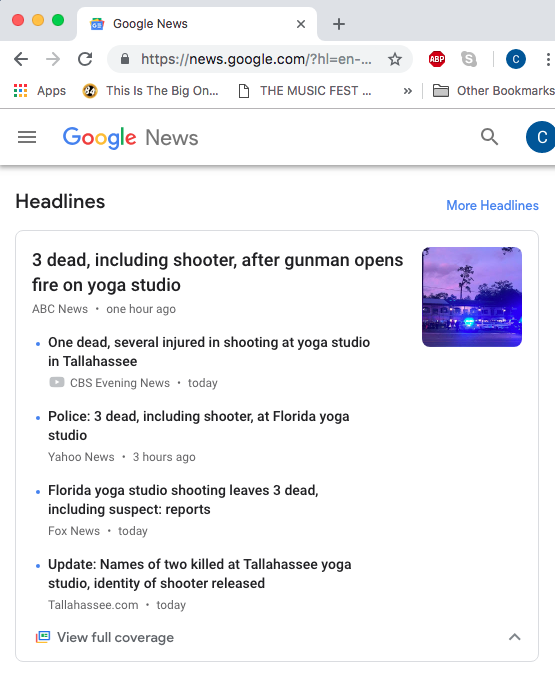 The mainstreams media’s (MSM) reaction to these staged psyops always tell the story.

The more the MSM sensationalize and overdo the coverage nonstop for days, the more it’s a black operation with a serious political purpose.

Shooter’s public profile immediately linked him to the Right

What is undeniable about these endless false flag mass shootings is that so many of them are allegedly committed by Republican white males who are on the extreme Right.  It’s as though the C.I.A. has a special MK-ULTRA mind control program dedicated to the creation of Right-leaning mass shooters to carry out these attacks when triggered.

This shooting in Tallahassee is no different.  See this extensive personal profile posted by Heavy.com within hours of the alleged shooting. Scott Beierle: 5 Fast Facts You Need to Know

Take a close look at the top photo of the alleged shooter Scott Beierle who, it’s been reported, also killed himself as so many mind-controlled patsies do at the end of their triggered rampage.  How many of these mass shooters are ex-military and conveniently programmed to kill themselves when they have completed their final mission.  Who’s mission is it really?

As always, Broward County, Florida ALWAYS seems to be involved with these “False Flag Operations and Mass Casualty Events”.  Now just why is that.

In this case it just so happens that Rep. Kristin Jacobs, who represents Parkland, Florida in Broward County, was right there at the crime scene ready to offer her scripted testimony.  As follows:

First and foremost, this fastidiously staged shooting in the state’s capital was executed to galvanize the Left in Florida.  The Democrats are already full of a LOT of fear so it’s easy for the perps to stampede them into the poll booth with contrived acts of terror like the yoga studio.

Think about it: even yoga studios are no longer safe from the “white Christian males”.  This highly calculated brainwashing is now being done 24/7 by the MSM.  And it will only continue to intensify until the globalists feel they have sufficiently emasculated the Patriot Movement.

The FL governor’s race really is a do or die predicament for both major parties.  Whoever succeeds will likely dictate who wins the 2020 POTUS election.  Yes, it’s that important an outcome which is why the liberal billionaires (e.g. George Soros and Tom Steyer) dumping so much money into Gillum’s war chest.

“The Democrats know that there’s only one path to the
U.S. presidency in 2020 and that it runs right through
Florida.  Whoever wins the Sunshine State, becomes
POTUS.  That’s why the liberals are working overtime
to steal the FL governor election on November 6th.
With Gillum as governor, the DEMs will be in charge
of certifying the state’s vote for 2020.  A Democratic
administration in Tallahassee can also pull all kinds
of tricks to rig the election, or steal it outright, which
they are planning to do.  And they don’t care who
knows because they’re that desperate to remove
Trump.”

To understand just what else is at stake with this critical FL election, the following article well explains the various issues involved: RED ALERT: Here’s Why Soros Puppet Andrew Gillum Must Be Defeated

The Democrats have never been so desperate.  From now until Election Day the Deep State Democrats will attempt to pull off any machination or manipulation of the body politic necessary to swing the national vote in their favor. See: Anything goes until November 6th, especially this.

Conducting what are essentially domestic terrorist attacks are easy for the perps to pull of the shelf.  TPTB literally have hundreds of pre-planned false flag shootings and bombings ready to implement on a moment’s notice.  For those who doubt this grim reality, please read the following exposé.

“FALSE FLAGS” are LEGAL PROPAGANDA Produced by the Department of Defense

As usual, it’s nearly impossible to confirm whether this false flag shooting really even took place.  Crisis actors are now so common in these psyops that it’s difficult to tease out the truth.  Therefore, whether this was a real crime scene or a hoax will be subject to discussion for days to come.

One thing is for sure, the Chief Medical Director of the Capital Health Plan — Dr. Nancy Van Vessem was allegedly killed.  That’s would be a tough death to fake in light of her extremely high profile position in the Greater Tallahassee community.  However, anything is possible given the power and influence wielded by the New World Order globalist cabal.

KEY POINT: The physician who was allegedly killed was apparently chosen for a specific reason.  It’s quite possible that she was deliberately targeted by TPTB for reasons that may never be known.  Dr. Van Vessem was perhaps the most visible doctor and medical community leader in North Florida.  In any event, both her powerful position and high stature will surely push this Gladio-style terrorist attack into a whole new realm of discussion and scrutiny. 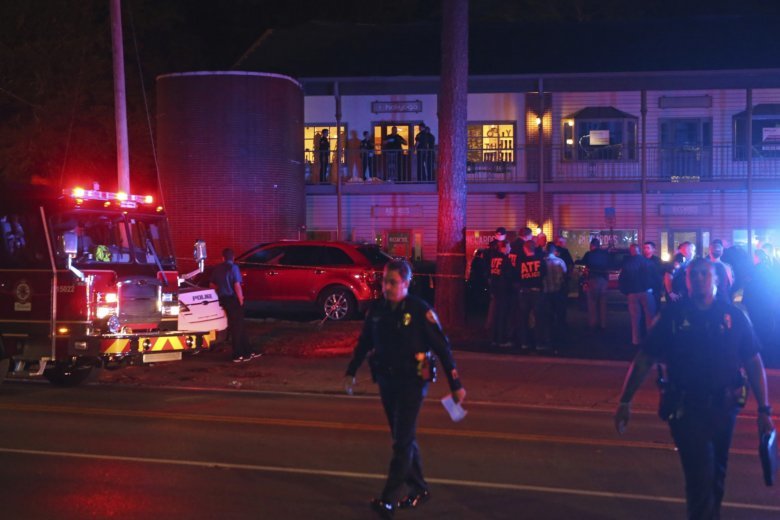 BOTTOM LINE: Just like Parkland’s Stoneman Douglas High School mass shooting, this carefully designed terror operation is about legislating more gun control, especially right here in Tallahassee.  It was no coincidence that the Parkland rep was right there to tell the media exactly what they wanted to hear, as if on cue.

Take away the guns and the globalists remove the single greatest threat to their planned One World Government.  They know that the American people, particularly the nationalists, are the biggest impediment to that covert NWO scheme.  This is why the power elite is so determined to completely strip the U.S. citizenry of their constitutional right to bear firearms.  It’s the most effective way for them to take away our power—FIREPOWER.

We want to make it very clear what’s really going on here. The theme of this article is not just another false flag perpetrated to determine the outcome of the FL elections or national elections.  Yes, that’s a part of their plan.  The real purpose, however, is to severely diminish the one HUGE demographic in America that has real firepower and strong intention to thwart the Soros-sponsored globalist agenda.

BOMBSHELL! “No one has died from the coronavirus” says leading pathologist

Marc Thiessen, The media’s mischaracterization of Trump’s Mount Rushmore speech is not an anomaly

5 thoughts on “ELECTION PSYOP: A ‘False Flag’ Mass Shooting in Tallahassee just before Election Day, How Convenient for Candidate Gillum”

BOMBSHELL! “No one has died from the coronavirus” says leading pathologist

Marc Thiessen, The media’s mischaracterization of Trump’s Mount Rushmore speech is not an anomaly

Don on BOMBSHELL! “No one has died from the coronavirus” says leading pathologist

Will on Fred Reed, America: A Country Not Salvageable Nor, Many Say Quietly, Worth Saving