“Shock and Awe” California Fires
Paralyze Instead of Galvanize 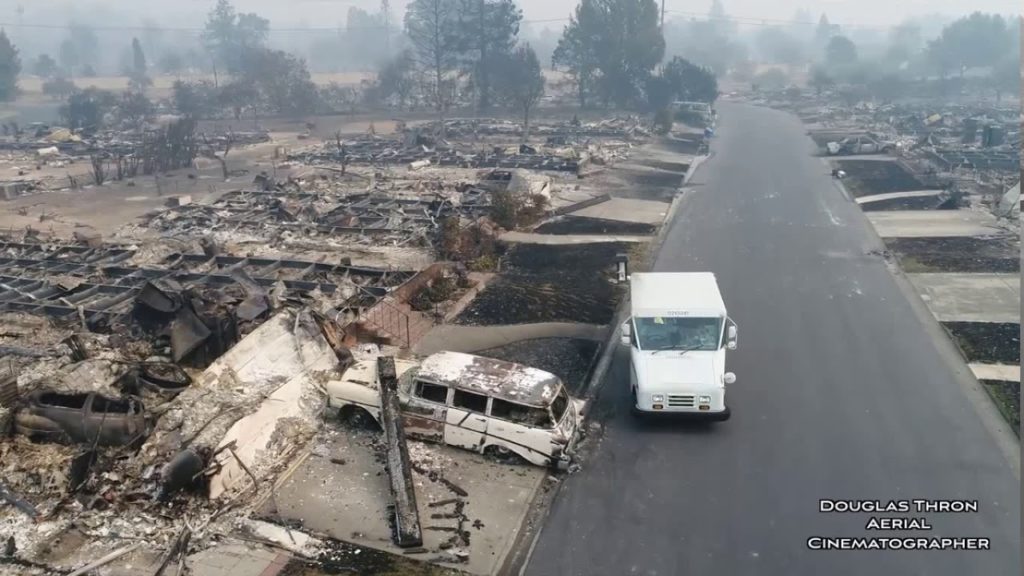 What will it take to motivate the American people to defend themselves as their families are murdered, pets are killed, homes are demolished, vehicles are incinerated, businesses are destroyed, farms are obliterated, communities are ravaged, cities are devastated and towns are leveled?

STATE OF THE NATION 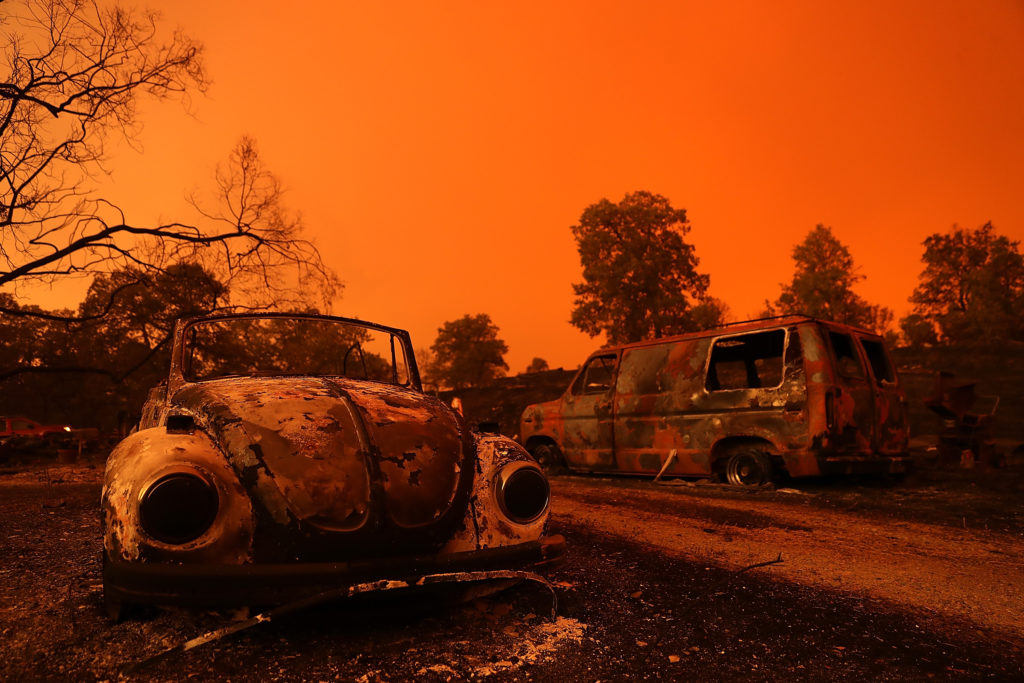 REDDING, CA – JULY 27: A view of cars that were destroyed by the Carr Fire on July 27, 2018 in Redding, California.  (Photo by Justin Sullivan/Getty Images) Why are the vehicles burned out and not the surrounding trees?!

There’s no question that the New World Order globalist cabal carried out the November firestorm attacks throughout California with an explicit, yet very secret, purpose.

Yes, there are always multiple objectives behind these cataclysmic events manufactured by those who wish to overtly rule the world.  However, the recent extraordinarily brazen attack on California had one goal above all others, even beyond distracting the American people from the rampant election theft on November 6.

The cabal’s goal was this:
To see just how much the
globalists could get away
with before the people
caught on or would even
defend themselves.

What is quite unfortunate as of today — November 21, 2018 — is that it appears the perps have gotten away with an unparalleled crime spree of epic proportions in California.  These DEW* attacks came and went like so many others, and most people are not even questioning the official narrative.

That so many have suffered terribly in the aftermath of this ongoing act of false flag environmental terrorism, yet refuse to stand up for themselves individually or collectively, is a very sad testament to the current state of affairs in America.

Now the power elite know they will be able to get away with virtually any scheme that they attempt from this point forward.  They are confident that the populace has been successfully socially engineered so that they will not put up a fight.  Rather, the U.S. citizenry has demonstrated that it will permit the most egregious crimes against their person and property.

Truly, the geoengineered California firestorms and DEW attacks of 2018 have proven that the American people have neither the will nor the courage to even protect themselves, their families and friends, or their communities.

KEY POINT: When even the POTUS appears to be completely impotent in stopping these bold assaults on the citizenry, it’s that much more clear that We the People must assume a posture of self defense, as well as one that SCARES THE BEJESUS OUT OF THE PERPS. ATTACK ON CALIFORNIA: An Open Letter to President Trump 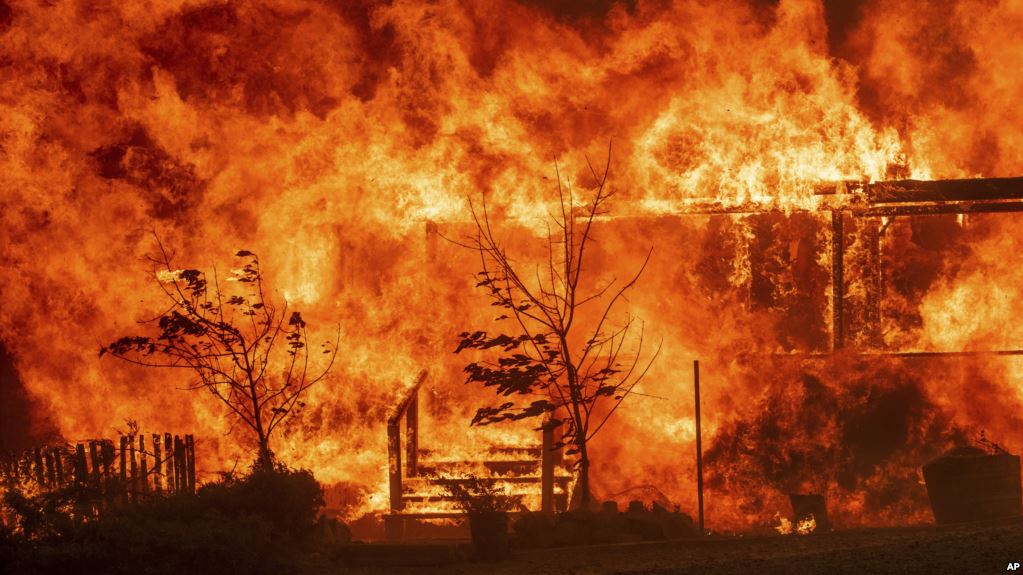 Firestorm consumes a home in Lakeport, California on July 31, 2018.

Here’s how they did it

Atmospheric Aluminum via Chemtrails,
Weaponized SMART Meters,
Specific EMFs Disseminated from
5G Cellphone and Microwave Towers,
Directed Energy Weapons,
Arsonists Disguised as Firefighters,
Gross Mismanagement of California Forests,
PG&E Power Lines Used to Start Fires,
and Weather Warfare Are All Used
in a Highly Coordinated Fashion
to Fabricate a Very Conducive
Environment for Isolated Firestorms
to be Triggered and then
Spread like Wildfire
in Targeted Communities
Throughout California

(Source: Here’s how the globalists and geoengineers conspired to manufacture the apocalyptic California firestorms)

The people must respond to this attack

State of the Nation has posted more content concerning these attacks on California than any other website on the Internet.  Given the considerable amount and high quality of so much hard evidence confirming this CA crime wave, it’s inconceivable that so few residents have coalesced around a people-powered, grass-roots driven initiative to get to the bottom of it.

One would think that every injured party across the state would seek all legal remedies available, as well as any financial compensation appropriate for their tremendous losses.

To date, SOTN has not seen any real movement in that direction.  We also see a window of opportunity that is rapidly closing for all aggrieved parties.  Once it shuts, the next “shock and awe”attack will be launched on another targeted region of the country. RED ALERT: Globalist Cabal Will Soon Change Conversation from California Fire Attack to Another Cataclysmic False Flag Event

Given the status quo, we really wonder what it will take to wake up a critical mass of citizens who will zealously protect hearth and home from those who wish to collapse the American Republic.

We the People must rise up and defend
ourselves. That can only be done by
apprehending the real criminals and
prosecuting them to the fullest extent
of the law.

Our nation is in dire need of divine intervention … like never before.

When the people won’t respond even to predicaments that demand measures which ensure self-preservation, only sincere and continuous prayer will help them.

Because the dark forces at work in California and elsewhere are so strong and focused, only a concerted prayer effort can thwart their nefarious agenda.

What happened in California during both wildfire seasons of 2018 and 2017 is beyond comprehension.  Only when viewed from the highest perspective can the true purposes be seen.  Then it will become apparent that this is an opportunity not to be squandered.  Too many good souls have perished and should not die in vain.

May God bless America in our moment of great urgency!

Editor’s Note: If you’re reading this, you are one of the few good and smart people who are viscerally disturbed by these blatant attacks on our fellow Americans. You are well aware of the sheer depth and breadth of those forces arrayed against US. You are also of the ilk who will not accept this profound betrayal under any circumstances. Congratulations … you are awake and honorable! May your endeavors in this regard be commendable. May the ancestors look upon your actions with great pride, and your peers offer their heartfelt praises. http://stateofthenation2012.com/?p=108712

3 thoughts on “CALIFORNIA DEW ATTACKS: NWO Globalists Can’t Believe They Got Away With So Much Mass Murder and Destruction”