It’s being billed as “the deadliest transportation accident” in almost a decade. Over the past two days major media outlets descended on the small upstate New York community of Schoharie to report on the tragic deaths of 20 twenty and thirty-somethings–many of them newlyweds with newborn children.

They were young adults — sisters, brothers, old friends and newlyweds — who were celebrating one of their birthday’s in a rented SUV limousine on a drive through rural Schoharie County.

They are now victims of the nation’s deadliest transportation disaster in nine years.

Twenty people died Saturday afternoon in the horrific wreck at the intersection of state routes 30 and 30A in the town of Schoharie. The stretch limo, packed with 18 people, drove through a stop sign at the notorious intersection and fatally struck two people in the parking lot of a popular country store, before slamming into an earthen embankment and killing all of the oversized vehicle’s occupants.

What’s odd about this event is the fact that there are very few photos of the vehicles involved in the collision. Coverage states most of the victims were traveling in an oversized SUV-style limousine that was illegally modified and owned by a Pakistani-born FBI informant. 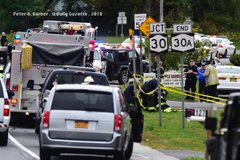 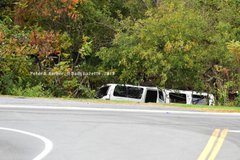 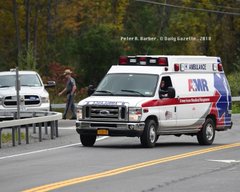 #518news #schoharie Emergency vehicles surround the Apple Barrel Cafe at Route 30 and Route 30A in Schoharie after a van style limousine and an SUV collided injuring several and killing approximately 3 people.

Out of 129 photos the Times Union published, most of which were comprised of attending law enforcement, reporters, grieving onlookers and relatives, and the swiftly organized candlelight vigil, only one is included of the purported limousine, and this image shows the vehicle deeply immersed in foliage and therefore barely visible.

Photographs of the limousine are sparse in other news outlets as well. Those that have emerged appear to show different SUV type limousines, and a pickup truck in the woods that doesn’t even remotely resemble the limo in question.

The limousine allegedly struck a 2015 Toyota Highlander SUV in a nearby parking lot before traveling in to the woods, yet the autos in the photographs are clearly not that make, and with differing numbers of side windows look as if they are three entirely different vehicles. In fact, there are no photos of the damaged Toyota Highlander in any of the coverage, which seems odd given the major news media’s attention to the lurid details of such events.

Below are several images of a 2001 Ford Excusion limousine, most of which have five or more side windows or a very long one.

Video news stories of the crash aftermath online are sparse. Yet Rochester New York’s NBC affiliate WROC ran a brief report on October 7 with the image of a demolished black, sedan style limousine on a roadway that apparently never even descended into the nearby wooded area the white Ford Excursion was allegedly recovered from. Could this have been stock footage of an accident? If so the viewer is led to believe the image was taken at the scene, yet according to the white SUV Ford Excursion limo recovery storyline it was not.

Another aforementioned peculiar (though now commonplace) element of this story is the profuse amount of coverage afforded the victim profiles, mourning and vigils in contrast to concrete evidence of the tragic event itself and its aftermath, which photos of the damaged vehicles would have surely provided.

COUNTER-COUP: Deep state swamp moves against disastrous Biden regime as swamp creatures realize the whole country could burn down if they don’t stop the madness

16 thoughts on “James Tracy, SCHOHARIE TRAGEDY: The Strange Case of the Shape-Shifting Limousine”