Allow me provide the fact-based argument behind that statement. Beginning with a very basic baseline fact:

You can call it a soft-coup, or you can call it politicization of the DOJ and FBI, but the end result is the same – the intentional effort to manipulate, influence, and ultimately subvert an election for the presidency of the United States.

It is an inarguable reality that ideologues within the U.S. Department of Justice and Federal Bureau of Investigation used their positions to conduct a political operation against the candidacy of President Trump.  There is currently an Office of Inspector General investigation by Michael Horowitz to discover the scale of that basic truth.
The ongoing OIG investigation has already released some of the investigative evidenceproving the motives of the participants.  Additionally, through records and releases stemming from outside the OIG investigation, it is a fact the intelligence apparatus within the national security divisions of the DOJ and FBI used their databases to conduct unlawful searches of political opposition; and allowed ‘contractors‘ to do the same.
These clear facts exist regardless of opinion or sentiment therein.

It is also a fact the entities behind the 2015, 2016 and 2017 political operations are still at large, holding their same ideology, and presumably working toward their admitted end goal.  No-one, with the exception of the fab-five, has been forced to cease and desist.
Additionally, part of the false information from within the “small group” collective effort was Christopher Steele naming Michael Cohen as a Trump campaign entity who traveled to Prague to meet with Russian operatives.  The outcome of that false and publicized statement resulted in Michael Cohen suing Buzzfeed and Fusion-GPS to discover how the Clinton-Steele Dossier reached the false conclusion.
♦We know the Steele Dossier contains content that was not exclusive to Christopher Steele.  ♦We know Fusion GPS held proprietary ownership of the Steele Dossier content. ♦We reasonably know that Nellie Ohr provided much of the research for the dossier content. ♦We know that FBI contractors, perhaps Fusion entities, used unlawful FBI FISA-702 searches to gain information that was passed on to Fusion-GPS and Nellie Ohr etc.  ♦We also know the story of Michael Cohen traveling to Prague is inside the Steele Dossier; and we know the story is false – It was the wrong Michael Cohen.
Within the Cohen -vs- FusionGPS lawsuit there exists a very reasonable -and accurate- risk to the intelligence surveillance operatives who made the mistake.  Arguably that mistake could link the use of FBI and NSA database searches to the intelligence laundry scheme between the Clinton campaign, Fusion GPS, Nellie Ohr and the Christopher Steele Dossier.

So with all of that said, there are a multitude of motives for the “small group”, and those who support the “small group”, to oppose President Trump’s personal lawyer Michael Cohen.  Consider the bigger picture behind their prior activity, engagements and motives therein. In the aggregate they have not been challenged, stopped or blocked; and as a result, all of those ideological allies have nothing to lose.
Adding fuel to the multidimensional motive, the U.S. media apparatus, writ large, is in alignment with the “small group” objectives.
The evidence of the media motive surfaces amid dozens of leaks surrounding the FBI raid against Michael Cohen.  From those leaks hundreds of stories are being written regardless of accuracy.  What each of those stories has in common is a baseline the FBI took information from the raid. This is the critical point to understand.
The actual content recovered from the FBI raid is irrelevant.  What the media needed was the raid itself.  The raid presents the factual cornerstone of every written article – from which any false assertion can be made about the content.  The media needed the raid, the media does not need the content.  See how that works?  We are seeing this in hundreds of articles based on anonymous sources who frame the narrative of content.
Accepting this reality we discover the big-picture “small group” motive.  That motive facilitated by the same ideological allies who conducted the 2016 campaign against the candidacy of their enemy, Donald Trump.
There may be voices who have yet to understand the full scope of just how badly the DOJ and FBI are corrupted by politics.  There are still some voices, co-dependents in their own abuse, who don’t understand or have forgotten the recent political history of the FBI and DOJ as it relates to other matters of ideological opposition.
Those co-dependent voices seem to overlook, or forget, a recent Federal Judge dismissing the entire case against the Bundy family because of gross DOJ misconduct:

U.S. District Court Judge Gloria Navarro dismissed the charges against the four men “with prejudice,” meaning they cannot face trial again. She said a new trial would not be sufficient to address the problems in the case.  A federal judge on Monday said the federal prosecutors’ conduct was “outrageous” and “violated due process rights” of the defendants.  (link)

Those co-dependent voices seem to overlook, or forget, a stunning rebuke of ALL DOJ attorneys in the DAPA case as outlined in a judicial ruling by Federal Judge Andrew Hanen:

“The United States Department of Justice (“DOJ” or “Justice Department”) has now admitted making statements that clearly did not match the facts. It has admitted that the lawyers who made these statements had knowledge of the truth when they made these misstatements. The DOJ’s only explanation has been that its lawyers either “lost focus” or that the “fact[s] receded in memory or awareness.” [Doc. No. 242 at 18]. 2 These misrepresentations were made on multiple occasions starting with the very first hearing this Court held. This Court would be remiss if it left such unseemly and unprofessional conduct unaddressed. 3  (read 28-page ruling)

So… it is not a matter of ‘if’ the DOJ was/is a corrupt organization entirely infected by political ideologues at almost every level. That troubling reality exists, and it is supported by those who should know best; federal judges who see the gross ideological corruption.
The FBI is structurally broken.  The organization is fractured beyond repair by political ideologues who operate at all levels.  It does no good to continue looking at the situation through a false prism.  Facts, evidence and actual behavior must be accepted.
FBI agents doing an honest job would not be conducting secret activities, falsifying evidence to FISA Courts, engaging in unlawful FISA-702 searches and shaping their investigations based on their sentiments toward the targets therein.  That’s just a fact; and it doesn’t take your accepting it to change the truth of it.
Unfortunately the oft-used “we support the field agents, and are not talking about the FBI people in the various field offices etc.” is a bunch of co-dependent enabling of our abusers. It is simply a bunch of hogwash feel-good double-speak; it is also entirely false.
Ask the Parkland, Florida parents about the Miami FBI field office and their opinion therein.  Ask the families of the Orlando Pulse nightclub victims about their opinion of the Orlando FBI field office.  Ask the families in/around San Bernardino, California how they feel about their local FBI field office.  Ask Garland, Texas.  Ask, runners in/around Boston, Massachusetts, how they feel about the FBI local field office.
You see, just like the DOJ from Oregon to Texas, the FBI issues are not limited to the offices in Washington DC.
So yeah, the FBI raid on Michael Cohen’s home, office and apartment in New York is just as connected to the systemic ideological enterprises that exist in all manner of other DOJ and FBI examples.  The intents are entirely political and the outcome therein is entirely predictable.
If anyone from the FBI or DOJ want to prove me wrong.  Please; go ahead.  You don’t have to do much to prove it.  I’ll accept the absence of Michael Cohen leaks and media stories as evidence of your commitment. However, I won’t be holding my breath.
Until then, my statement on Twitter stands as demonstrably true.
View image on Twitter 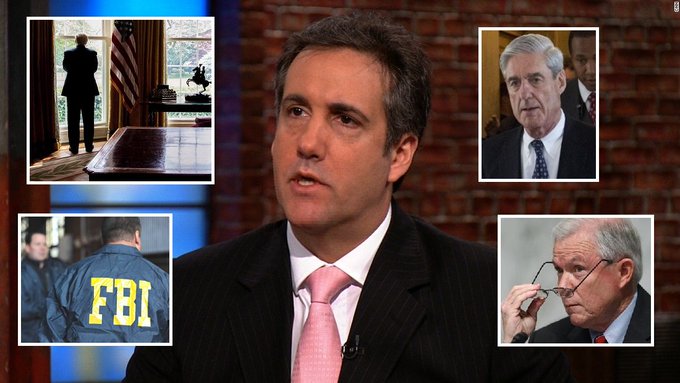 TheLastRefuge@TheLastRefuge2
The raid on @MichaelCohen212 ‘s home and office was gov. directed political opposition research. The FBI/DOJ officials who carried out the raid will leak the content to media to damage @POTUS & engineer narratives for election(s). That was the intent of the raid.
3:42 PM – Apr 12, 2018

One thought on “Sundance: The DOJ and FBI “Small Group” Motive Behind The Raid on Michael Cohen…”

Will on Patrick J. McShay, “Globalists, Communists, And Satanists—Oh My!”