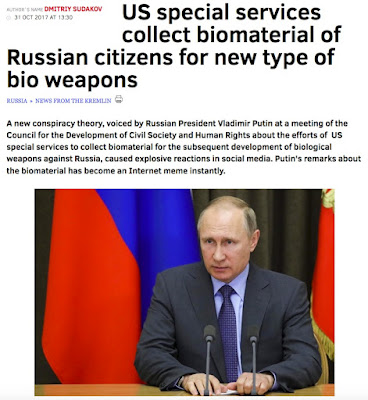 Information has reached me from Italy, Germany and the UK that foreign-funded NGOs in Russia are collecting Russian DNA samples from all over Russia for the US Government. I have found English language verification of these reports.
What is the reason for the US government’s interest in studying Russian DNA samples? What immediately leaps to mind is a tailored biological weapon that only targets Russians. Washington has evaded constraints placed on biological weapons work by maintaining laboratories in Africa.
Of course, there might be an innocent explanation. But why have Western-funded NGOs collect Russian DNA samples? Why not explain the project to the Russians, if the project is innocent, and invite them to work together on the project?
Putin himself has sounded the alarm (above and below).
Here are some additional sources:
https://www.youtube.com/watch?v=NF6bVTpTLF0&app=desktop
Here is the General Services Administration’s notice in behalf of the US Air Force for Russian Caucasian Synovial tissue and RNA samples: 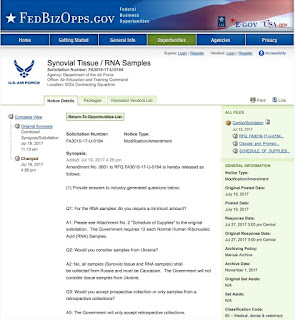 And this from a scientist in the UK:

“Understanding DNA underlies the basis of all life and deciphering its details allows the development of cures… and weapons of course. Even in the 80s when I studied molecular biology, it was possible to use endo-nuclease restriction enzymes to recombine DNA in all possible ways, including between all animal, plant and even insect species. In Cambridge in the early 90s, I routinely used original cholera bacteria from collections of epidemic outbreaks in the 19th century for my post-grad research to cut the cholera toxin in such a way that its disease-forming molecular part was separated from the immuno-genic part. This was not original work even in the 80s and 90s. I had declined to work with another Nobel Laureate in Cambridge, because I wanted to make healing vaccines against the most common killers of humanity:  respiratory and especially gastro-intestinal vaccines that cause diarrhea. I was too naive and far too compartmentalized at the time to understand why the British military wanted to invite me to meet with them at the time…”

Following years of Washington’s false accusations and threats against Russia, this latest development is likely to elevate tensions higher.