The explanation is obvious: They don’t have any death certificates or autopsy reports

If by now you are not asking questions about the Las Vegas shooting it is clear the masters that own you have done a great job at the PSYOP they continue to perpetrate on you and most Americans.  The entire aftermath of events demonstrate that if the police, FBI, and MSM were telling the truth, there would not be all the confusion. To clarify:

*The police and FBI have changed the timeline a few times while totally ignoring witnesses seeing 2 shooters.

*We have not seen any casino and hotel footage of the shooter “Stephen Paddock” which would probably clear up so much.

*The 2 security guards have no licence for the state of Nevada which should have made it impossible to work at any event or casino and the representative of the casino lied on a MSM news report saying he did not need one.

*Photos that were shown on the news and videos were staged.

*Youtube, Facebook, and Twitter are deleting videos that have evidence of a hoax, which violates freedom of speech and sends a message they have something they are hiding.

*The FBI collected witness phones and scrubbed everything off the phones that pertained to the shooting.

*A couple of weeks before the event a person from 4chan warned others to stay out of Vegas for the next few weeks due to an event that will bring in body scanners to casinos.

*A group, “Crowds on Demand” were advertising on Craigslist for Crisis Actors needed in Las Vegas for an event a few weeks before the shooting drill.

*There were videos of shootings at other casinos the same night as the concert and the police have continued to deny it happened.

*Last but not least the obituaries and grave sites of the victims should clear up the confusion for people as to why these issues have not been addressed.

The police, FBI, and MSM however are not concerned about these issues due to what they think about the American people.  “Never underestimate the power of stupid people in large groups.” -George Carlin  They believe that Americans have short attention spans and will forget or really not care about the story after a week or two.  Researchers or conspiracy realists will be shamed, harassed, or ignored by mostly everyone, therefore, doing the job for the officials who are deceiving the masses.  The PSYOP that has been perpetrated on the public these last few years is expressing outrage to anyone that would consider shootings a false flags or worse a hoax.  This has been rolled out by the MSM and the gullible American people, have fallen for it each time. This should, at this point in time, bring up a red flag for everyone. The officials that fool us with every false flag or hoax get away with it continually, because Americans let themselves think with their hearts and emotions versus rational thought.  If Americans would step back and think without the emotional manipulation they would see there is plenty of evidence supporting no deaths and no concrete evidence that there were.  The evidence in this blog should be the smoking gun needed to make everyone stand up and take notice.
The initial blog from last week presented 19 “victims” of the shooting with evidence that the obituary records were changed and that the people who died did not die at the concert, but in the state they were from. Some died on different dates of the shooting and different causes of death.  Out of the 19 “victims” further research show only 6 have a grave site. There are also 5 additional “victims” that have a grave site and were added to the list of “real people”.  Three of them have an obituary prior to the shooting obituary that confirm the “real people” that died, just not at the concert.  The other 2 results which is the smoking gun evidence will be listed below with pictures of proof. The rest of the “victims” are either alive and are using an alias or really did not exist and were created. Cremation may be a factor with these results especially the “victims” that had separate obituaries from family before the shooting obituaries.  Those victims were listed in the initial report.   Overall, there are 11 maybe a few others that are the “real people’s” identities used in the shooting
The 11 victims out of 58 that have a grave are:
Heather Alvardo, Carrie Barnette, Sandra Casey, Charleston Hartfield, Carly Kreibaum, Lisa Patterson, Tara Roe, Christopher Roybal, Bailey Scweitzer, Erick Silver, and William Wolfe Jr.  Listed below are 4 people from this list with additional conflicting evidence with the official narrative.
Charleston Hartfield is the first. In the pictures that were used by the media and the family show there are 2 different Charleston’s and it was unclear as to which one would be the one that was buried.  Charleston #1 the older one:

Or Charleston #2 the younger one. Similar looks probably father and son but different men. 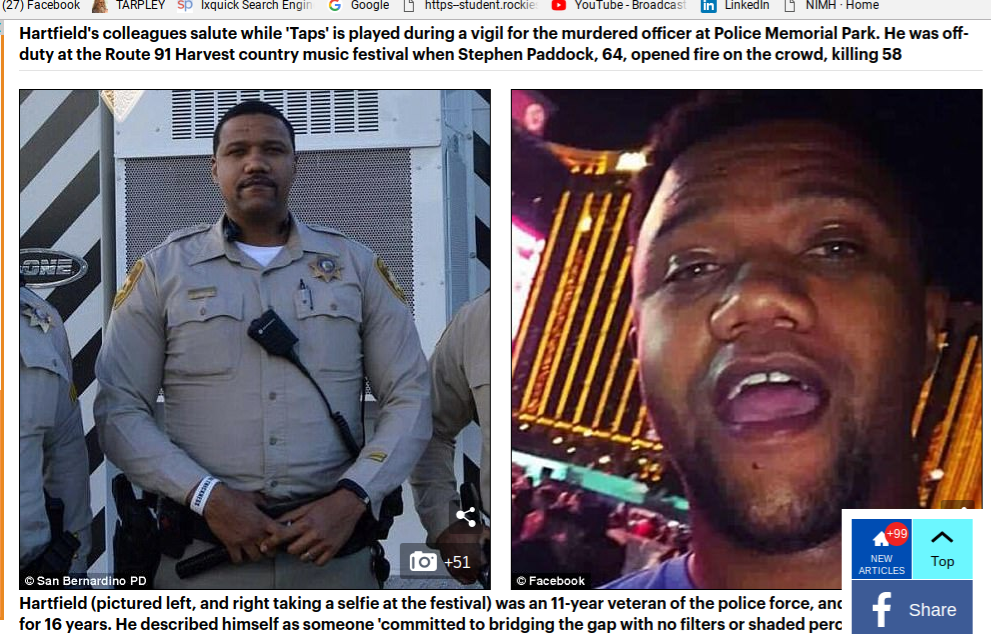 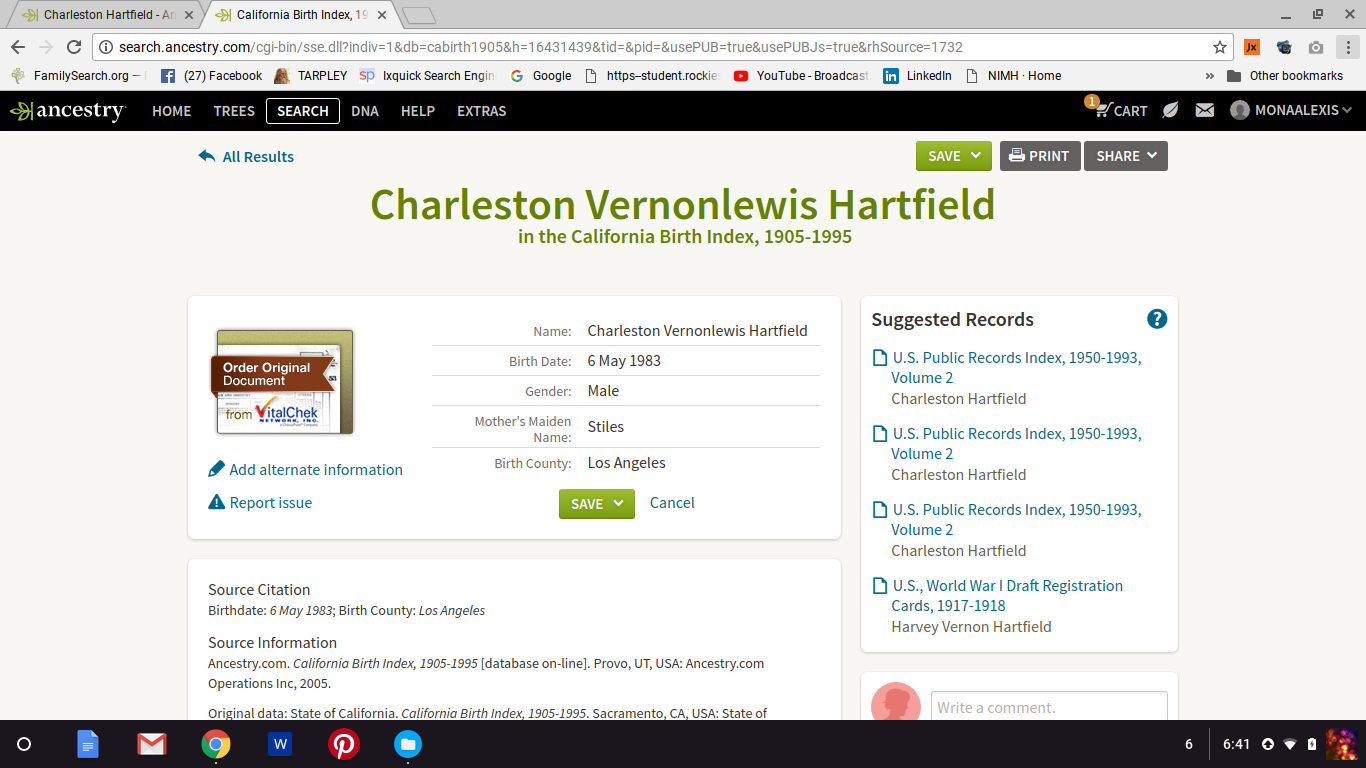 A LVRJ newspaper article layed out the events of October 20th, 2017 when the funeral and burial would take place. 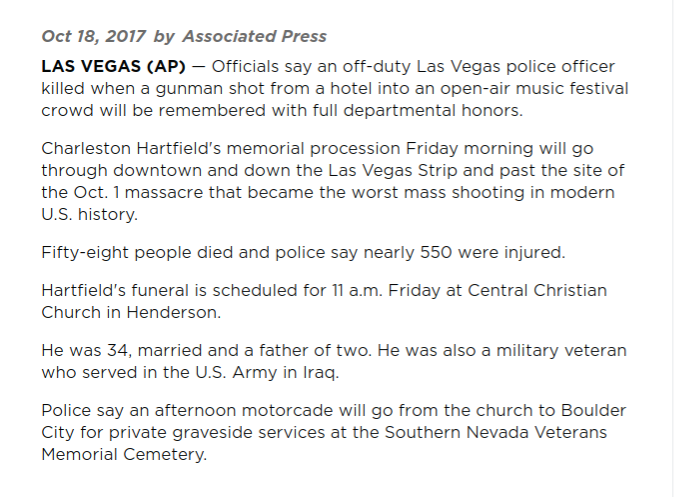 Upon a search for the grave site at that cemetery two results came up. The first was at findagrave.com listing the cemetery he was laid to rest. In this memorial it states his birthday is 05/16/1983 when it is actually 05/06/1983. Done purposely? 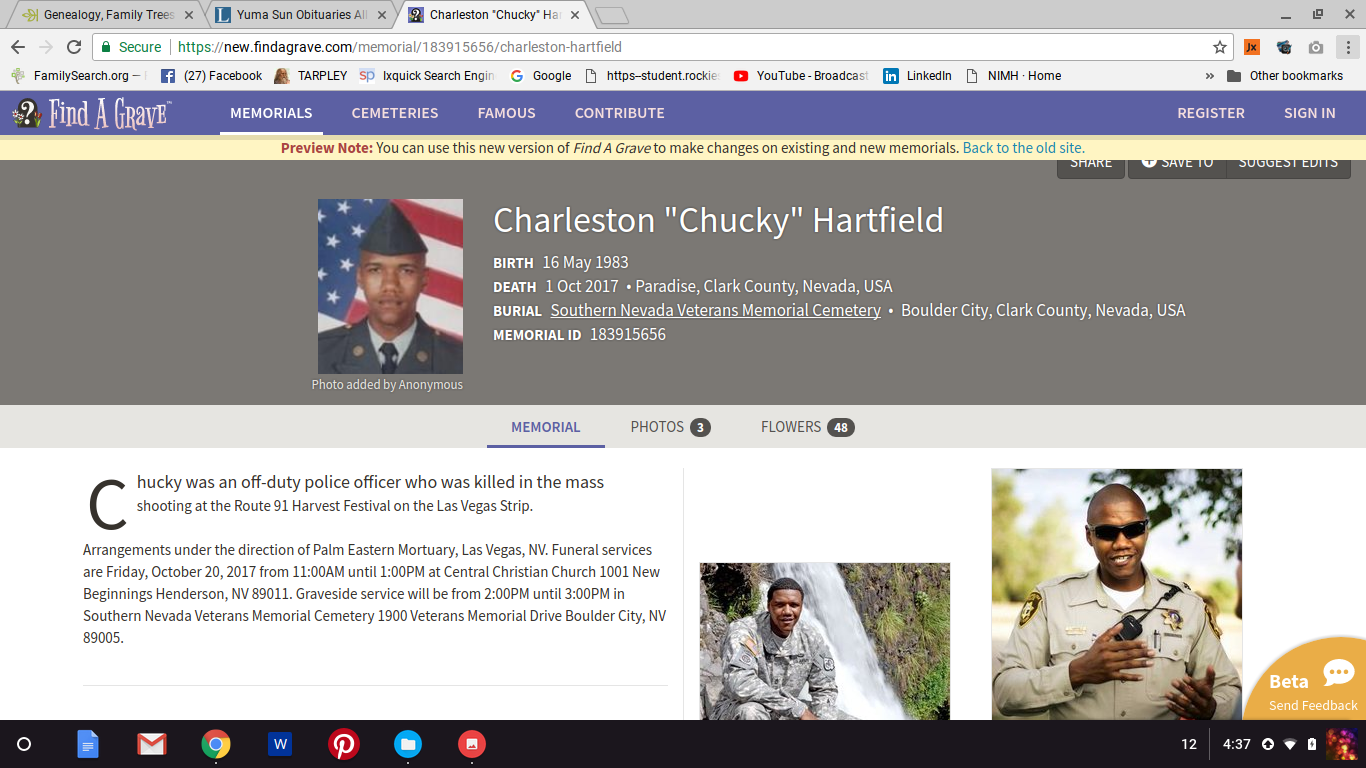 The second search was completed directly from the National Military Cemetery website and produced these results: 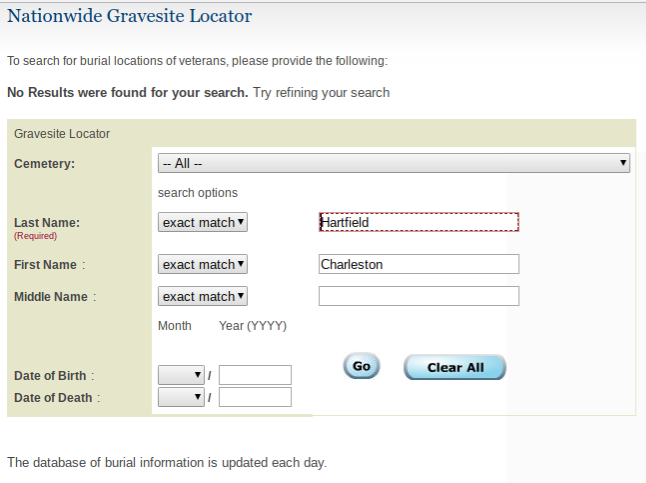 So to verify which one was accurate a fellow investigator that lives in Las Vegas visited the cemetery in Boulder City and discovered there was no grave, and only a tiny marker with his name on it, a week after he was supposed to have been buried. The first listing was a memorial that was purchased by a friend to have his name attached the the cemetery without a grave. So, there is no gravesite.  Therefore, neither Charleston #1 or #2 was buried at the cemetery proofing lies, deception, and no death.  Also, a current LVRJ newspaper article stated his mother had a heart attack a day after his funeral in Las Vegas. There is no evidence that she died anywhere.
Furthermore there is a search on a military website the lists him as still active duty to this day. This was checked 11/01/2017 on Vetfriends.com

Second “victim” Tara Ann Roe born 9/1/1983. Here is the memorial and information of where the gravesite is.  It looks like Tara did die in Nevada but not on the 1st of October. It looks like her family changed the wording in the obituary area but forgot to change the day she really died 09/27/2017. Oops!

The third person is Carrie Rae Burnette born 12/16/1982. It shows in this memorial the cemetery she was buried, Redondo Beach, and where she died, Garden Grove, California. 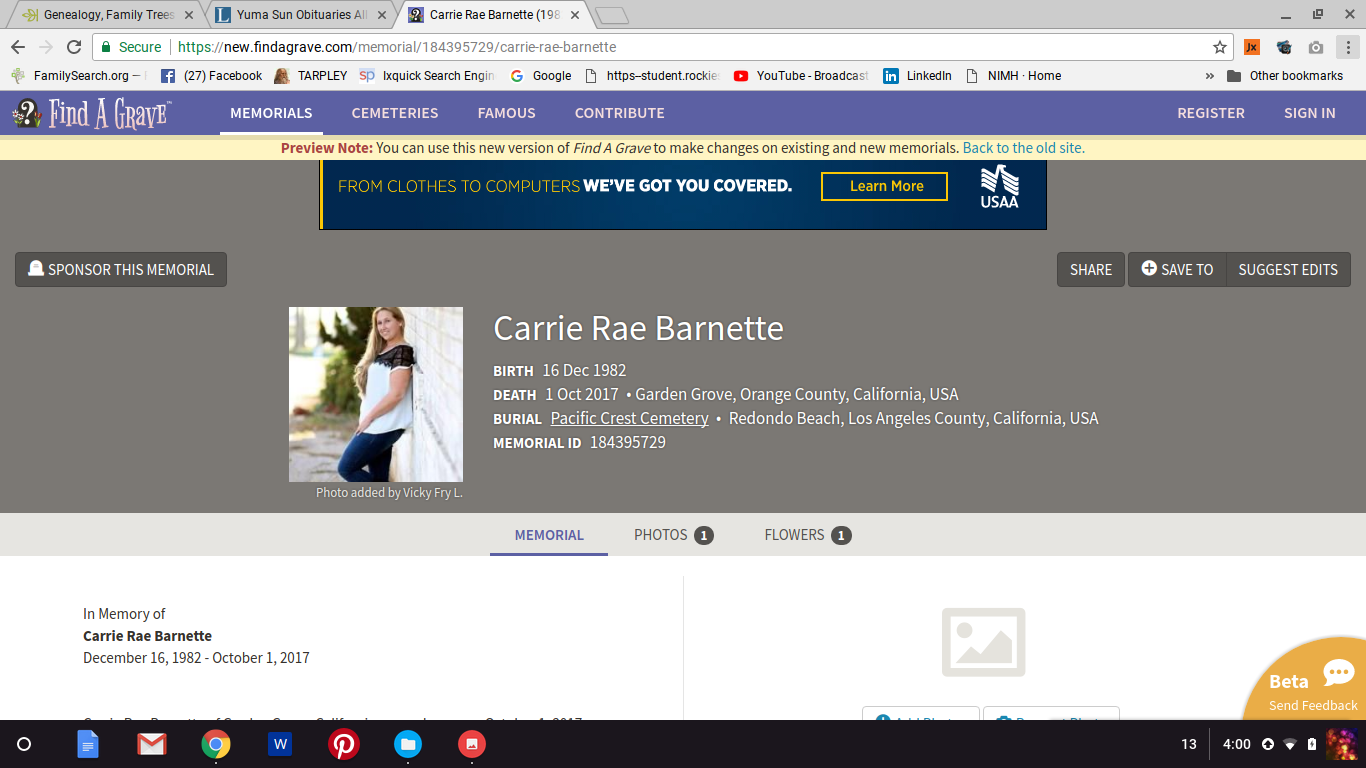 The fourth and final “victim” is Lisa Marie Patterson born on the 26th of June 1971. It states in the memorial she died in California.

The thought of the government (LVPD, FBI,) and/or “Crowds on Demand”, actually getting people who died in other places and/or dates, is a new technique implemented in these false flag events.  It makes one wonder how in the world they talked the families into that.  It seems money made defrauding the American people cheapens the loved ones death and is not something very many people would do if they had that choice.

The Stephen/Bruce Paddock update since the new information that “Bruce” has been booked in and LA jail for looking at child porn. There are very interesting issues in this booking to look at. The picture to the left is “Bruce Paddock” and the one on the right is Stephen. The two photos are the same photo used to create two different men. Both photos have been run through a website called, Foto Forensics, that clearly find that photoshop has been done to both pictures.  On Bruce’s photo his entire face is blurred and shows has been changed especially in the ears and the lips.  Stephen’s photo has photoshopped out the eyebrows and forehead wrinkles.  ON Bruce’s photo eye color changed/widened, face tanned and filled out to make it look like a different man. 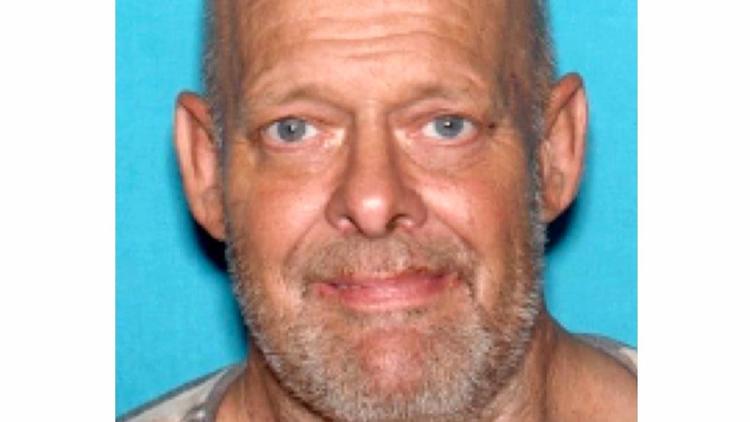 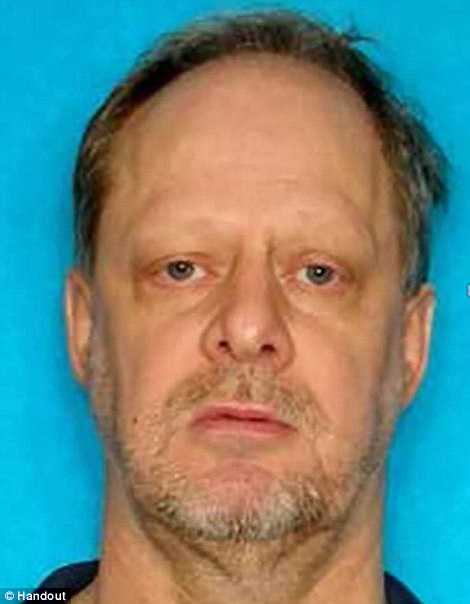 Bruce Paddock’s birthday that the LAPD listed in his booking show an almost nonexistent presence for online information. Nothing about him and his birthdate at all. The only evidence online is where he has lived which is in the exact same many places that Stephen has and their names are connected in almost every search.  Below is his booking information. His booking compared to many other inmates were different in that there is no charge after the words Charge level. In other inmate bookings there was always the charge. Also, he was released with no bond on the 28th without any bail money.  The newspaper stated that he had prior charges. This was his first charge and there were no others when doing a nationwide search. 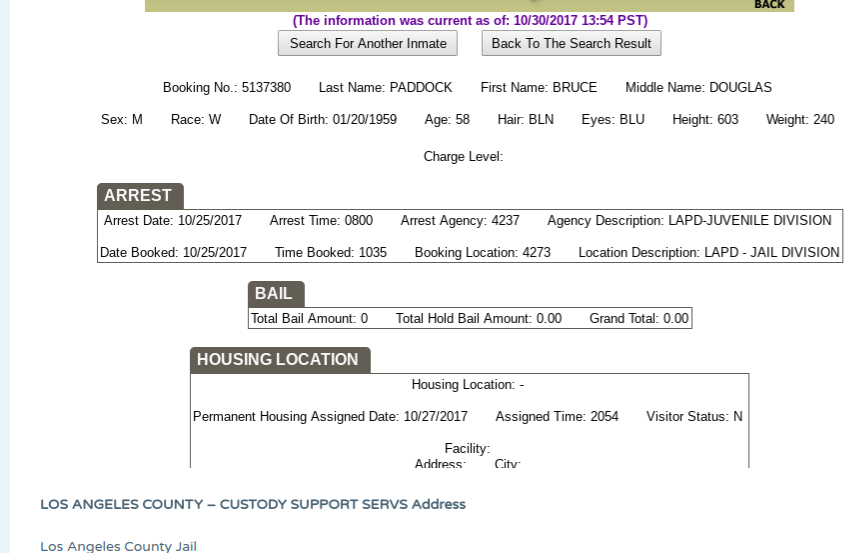 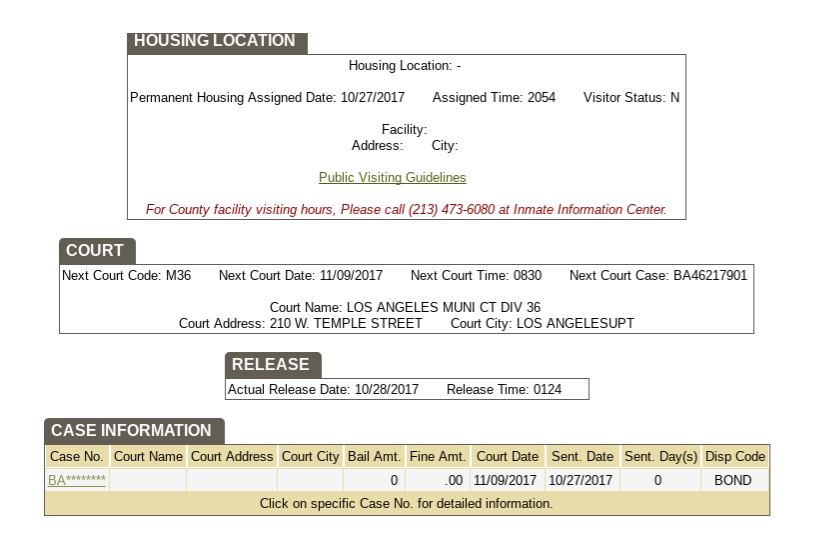 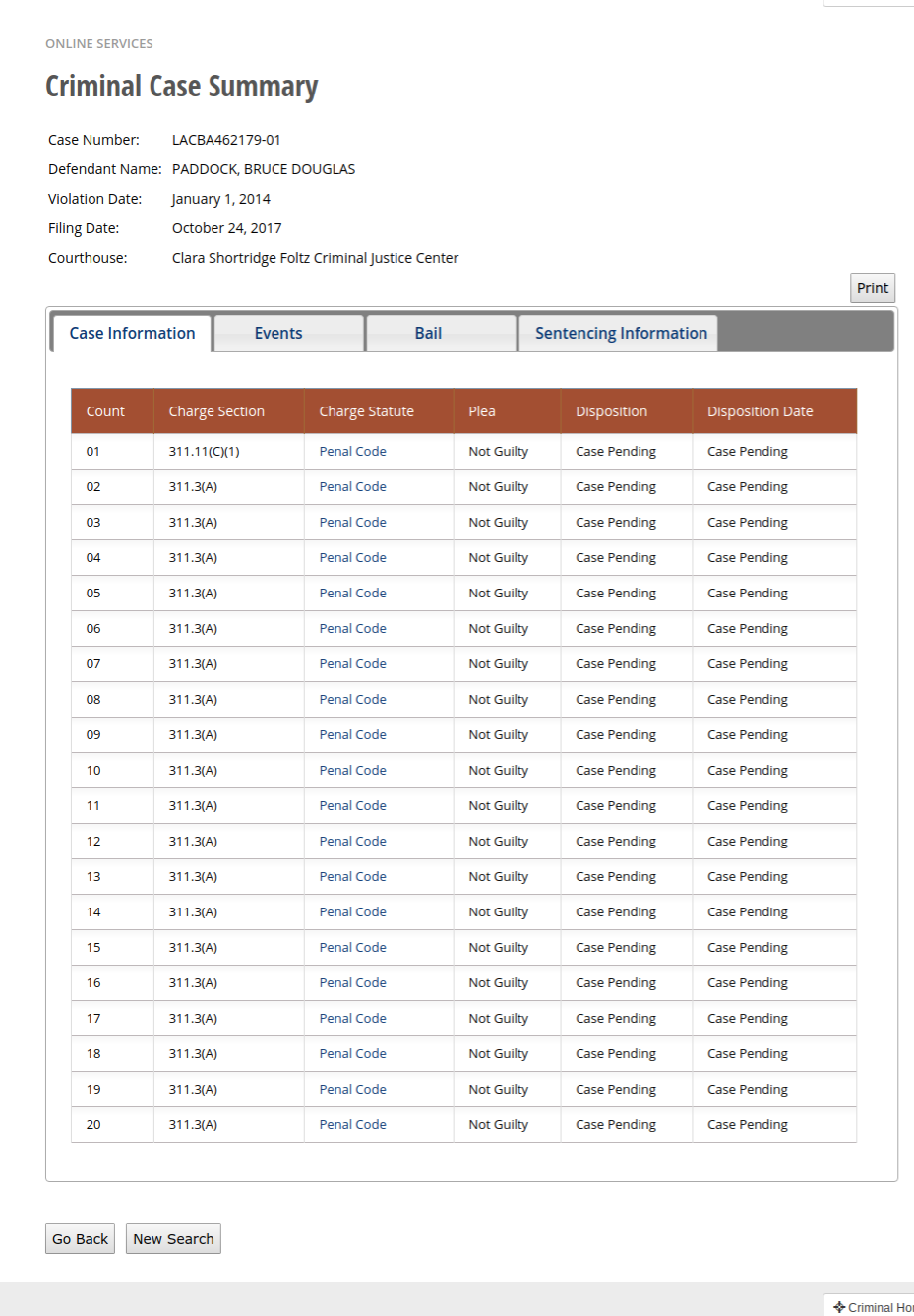 Finally a picture of Stephen Paddock (probably not his real name anyway) without the photoshop of the other two pictures. Yes, he is Eric also. This is using as few people as possible for the event. 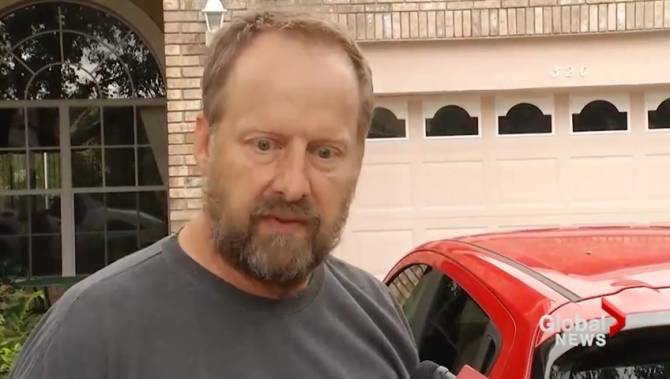 So the moral of the story is never trust the government and always, when it comes to mass shootings, look for the evidence of death first and not the other way around.  Everyone running around with all these second shooter ideas thinking everyone including Paddock died. Question and doubt everything and it will eventually lead to the truth. A total show/production put on by the LVPD, FBI, MSM including LVRJ owned by Sheldon Adelson, and yes Trump had to be in on it, visiting his friend Adelson and the non-injured people in the hospital.

Mona Alexis Pressly, Conspiracy Realist and M.A. in psychology, has conducted extensive research into the identities and causes of death of those who have been listed as “victims” of the Las Vegas event.

Jim Fetzer, a former Marine Corps officer, is McKnight Professor Emeritus on the Duluth Campus of the University of Minnesota. His show, “The Raw Deal”, is back on Revolution Radio, Studio B, T/Th from 4-6 PM/ET. Listen LIVE

For more on conspiracy realism, see “Conspiracy Realists: The Archenemy of the CIA”, http://themillenniumreport.com/2017/08/conspiracy-realists-arch-enemy-of-the-c-i-a/

146 thoughts on “Mona Alexis Pressley: CONFIRMED: Nobody Died at the Las Vegas Concert”