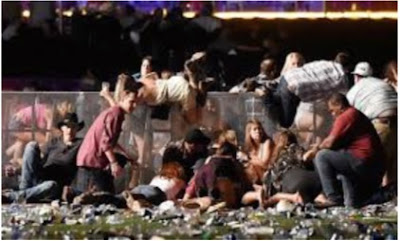 An American Trauma Surgeon Responds:
Dear Dr. Roberts:
This note is in response to your invitation for medical professionals to comment on the LV shootings with respect to the authenticity of the publicly available videos and whether they prove or disprove that actual victims were injured or killed. I am a retired surgeon with experience in managing patients with massive blood loss in an operating room setting and in other in-hospital cases of marked hemodynamic instability from hemorrhage.
The retired surgeon from Florida made many excellent points already and I will try not to repeat them. Here are some additional problems with the scene as presented in the publicly available videos:
1)  We do not see CPR being conducted on anyone that I am aware of. This would be extremely unusual for a massive shooting. Surely someone would have captured it on their cell phone. Even if it took a while for the EMT’s to arrive, it would be reasonable for non-medical personnel in the audience who have taken a basic CPR course to have started it.
2)  Given the alleged number of victims, we should have seen some evidence of arterial bleeding, no doubt at least several instances of massive hemorrhage (arterial bleeding is often associated with blood being ejected from the site of injury, a so-called arterial “pumper”). What is the probability that no one captured an example of it?
3)  If some of the rounds were from a fully automatic high caliber rifle or machine-gun like weapon(s), some of the victims should have had obvious massive and visible trauma to the head, neck and extremities. So far, I have seen no evidence of it.
4)  There is a complete absence of the kind of urgency one would expect from the professionals who allegedly responded on display in the videos available. Where are the EMT’s with their stretchers rushing to the victims? We see pictures of people in the audience crouching down, laying down, crawling, walking and running away but no evidence that any of them have sustained a gun shot wound(s).
5) If hundreds of people were actually injured (not counting those who allegedly died at the scene) and taken to local emergency rooms, someone should have captured evidence on their cell phones of severely injured victims being wheeled into ER trauma rooms and being taken to surgery. I have not seen any videos from emergency rooms in which victims with actual wounds are displayed. Surely some of the local media would have arrived at the local hospital ER’s to take pictures and to interview the uninjured persons accompanying their friends/relatives. No interviews have appeared in which surgeons who attended the victims have been carefully questioned for the extent of injuries sustained. Similarly, no pathologists have been interviewed about their necropsy findings.
6)  Where are the death certificates of those who died at the scene? Where are the autopsy reports which would have been mandatory? I have seen pictures of alleged deceased persons but not actual proof of death(s). Moreover, why have there been no news conferences from the hospital(s) reporting on the progress or subsequent deaths of injured patients? Surely, someone with critical injuries must have died by now if the event was not staged. The only videos I have seen depict alleged shooting victims who do not appear to have sustained a GSW.
7)  If hundreds of injuries/deaths occurred, the video evidence should have been overwhelmingly in support of it given that almost everyone has a smart phone with camera capability. Yet, we have clearly been shown videos which do not support it. That is very strange and suggests that better video evidence is lacking, as would be expected if much or all of the scene was staged.
8)  It has been reported that a mass casualty drill was taking place in LV either at or prior to the alleged mass casualty event. Many false flag events have been preceded by a drill that “went live.” It has also been reported that citizen researchers who have called the closest local hospitals have been told that they had no record of gunshot victims. These claims need to be substantiated.
9)  The fact that advertisements/requests were placed asking for “Crisis Actors” in the LV area strongly suggests that the event was either partially or totally staged.
These represent only a few of the problems that come to mind at this point. 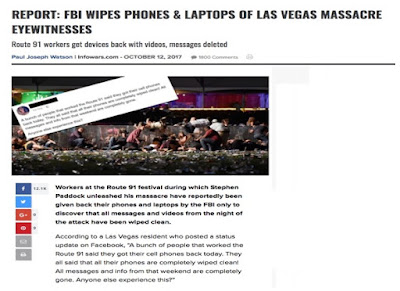 This reader writes that there was an active shooter drill underway in Las Vegas:
There was a FEMA “active shooter” drill going on that very same week in Vegas. Look into it more. It may have overlapped with the real situation to purposefully sow confusion and throw the scent.
Based on developments in England, this reader speculates that laws are coming our way that criminalize independent citizen investigations:
In your October 11 article “More Responses to the Military Surgeon’s Letter”, you ask “Is the real conspiracy one of establishing official stories as fact regardless of evidence?”
There is a strong case for that contention. I refer you to the October 2 Guardian article titled “Amber Rudd: Viewers of Online Terrorist Material Face 15 Years in Jail”.
In the article, the Home Secretary is quoted thus: “I want to make sure those who view despicable terrorist content online, including jihadi websites, far-right propaganda and bomb-making instructions, face the full force of the law.”
The inclusion of “far-right propaganda” in her statement is ominous. It appears that the stage is being set for the thwarting of all independent investigation in the aftermath of a tragedy, with severe legal penalties for those who do not comply.
And this from England:
Regarding your question “Why then are what clearly seem to be crisis actors employed?”.
I’m going to take a wild guess. They are preparing us for war and so they don’t want the people to see blood and guts and just how horrendous the injuries are as it might cause people to think about the reality of war. The shocking images would make people fear what war will do to their friends and family and then they will object and oppose the war mongering of the politicians.

They used actors to make being shot seem not so bad – your clothes stay clean and you are soon upand about again – so “Let’s have a war, it’s nothing to worry about”.

Once again, the question that should be on our minds is why such a public event as the mass shooting of 573 people is not a completely clear transparent event?

Why the lack of hard evidence? Why instead do we have videos of non-medical personnel incorrectly carrying non-wounded people?

Some claim that the bullets were fired from too far a distance to do much serious damage. This is the answer to why none of the 500+ reported wounded have been reported to have died from complications from their wounds. So, why then did 58 or 59 people die on site from the bullets? Alternatively, how is it possible that automatic fire into a packed audience only hit 58 or 59 people and the 500+ only suffered minor injuries by wood splinters and pieces of concrete thrown up by the bullets, thus, no deaths from the injuries? 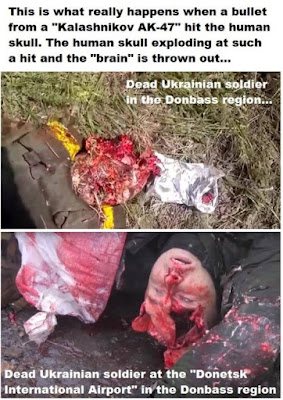 Why is it that with these terror events—Las Vegas, Boston Marathon Bombing, 9/11 itself—drills reflecting the alleged events were being conducted? Why has the media, not only the US media, but also the world media, never asked this question?

How is it that almost every time that there is a terrorist event, a drill of that event is taking place?After all this time, how can this question remain unasked and unanswered?

How is it possible that 573 people can be shot in a public place, and aware people can have no confidence in the official story?

We know we were lied to about the JFK and RFK assassinations, the Martin Luther King assassination, the Gulf of Tonkin, the Israeli attack on the USS Liberty, Saddam Hussein’s “weapons of mass destruction,” Assad’s use of chemical weapons, Russian invasion of Ukraine, Gaddafi, Yemen, Somalia, Obama’s overthrow of the Honduras government, and Maduro in Venezuela still targeted for overthrow along with the governments of Ecuador and Bolivia. The lies we know about are voluminous. There are 3,000 structural engineers and high rise architects, and also physicists, nano-chemists, first responders, high placed former government officials, and military and airline pilots who challenge the official 9/11 story. And all of these experts are dismissed by the presstitute media, which in total probably doesn’t have an IQ of 100, as “conspiracy theorists.” Can you imagine a dumbshit American media talking head calling an internationally known nano-chemist at the University of Copenhagen a “conspiracy theorist” for publishing a peer-reviewed scientific article that he and his team of scientists found reacted and unreacted nano-thermite in the dust residue of the World Trade Center?
This is the American media, a collection of dumbshit whores who sell their souls to official lies. America has no greater enemy than its own media.