Breaking News
Israel is deliberately obliterating media buildings in Gaza to cover up the war crimes that will follow
Jack Mullen, Reality’s Harsh Taste: Civilization Commits Suicide
Ten Absolute Truths About the 2020 Election and Election Fraud That Every American Should Understand
William de Berg, COVID-19 Vaccine Wars and Waves
The people who want to keep masking: ‘It’s like an invisibility cloak’
17 May, 2021
Skip to content
The NOI Research Group
On April 20th our on-line staff tried to access the NOI Research Group Facebook page (https://www.facebook.com/NOIResearch/) but found that we were unable to log in. It had been blocked by the Facebook “Security Team” with this message:

Facebook provide no other explanation or detail as to why this hostile action. We have had no problem accessing the page since it was established in May of 2013. Now they were requiring that we provide a series of IDs to unblock it—passports, military IDs, driver’s licenses, and a list of other official IDs. Clearly, Facebook (on behalf of the ADL, FBI COINTELPRO, etc) was using this tactic to reveal the staff of scholars and associates of the NOI Research Group.
We contacted our technical staff who manage the NOI’s on-line presence—including the Final Call newspaper, and social media sites of The Honorable Minister Louis Farrakhan, as well as the director of the Farrakhan Twitter Army—and they were expecting, but had never seen, this kind of assault from Facebook. It also coincided with problems that Prof. Kevin Barrett was having with “terms and conditions” issues with his GoFundMe account, which started on the very next day: 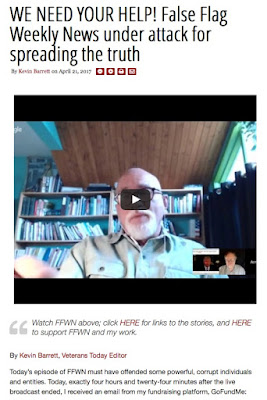 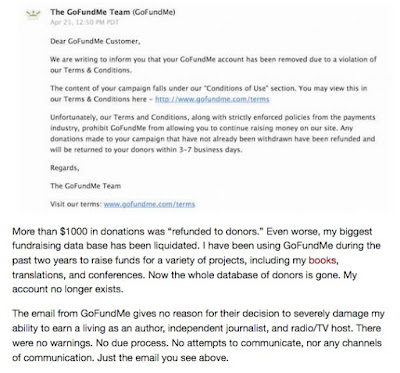 It then became clear that Facebook was responding to our highly successful Detroit forum titled “Israel & the War on Islam: 9/11 Revisited, Uncovered & Exposed.” (https://www.noi.org/911revisited/) We are told that, with 4,000 attendees and world-wide streaming, it was one of the largest events that the 9/11 Truth Movement has ever had.

With powerful presentations by Architects & Engineers for 9/11 Truth, Dr. Kevin Barrett, and journalist Christopher Bollyn it targeted Israel’s clear role in the 9/11 (and continuing) false flag operations. The NOI Research Group coordinated that event, and continued to publicize it, and the simultaneous attack on Dr. Barrett and us was the clear Jewish retaliation.

It also was the direct result of the ADL’s building of a “command center” in Silicon Valley. According to CNET: (https://www.cnet.com/news/adl-silicon-valley-command-center-fight-against-online-hate/)

The language “expose and stop” suggests that the ADL has been given power to actually censor the flow of information through Facebook accounts. It must be emphatically noted that Blacks are not asking/demanding that Facebook “shutter” anybody’s accounts—whether they be anti-Black or not. If anything, we would advocate the “shuttering” of CNN, NBC, ABC, CBS, MSNBC, NYT, WP, etc. etc. They are responsible for FAR MORE on-line damage than some “Richard Spencer”—whoever he is. So, here we have the ADL claiming to act on OUR (Blacks’) behalf, with their real aim being to control Blacks—not save them.
As we made several attempts to access the page we were given impossible options to “resolve” the issue, including a way to “confirm our identity” by identifying photos of people associated with the NOI Research Group page. We took a screenshot of one such “test” that shows 3 pictures for us to identify. Easy enough. Two pictures are of The Most Honorable Elijah Muhammad and one picture of The Honorable Minister Louis Farrakhan. But the 7 check boxes, as one can clearly see, have neither name! 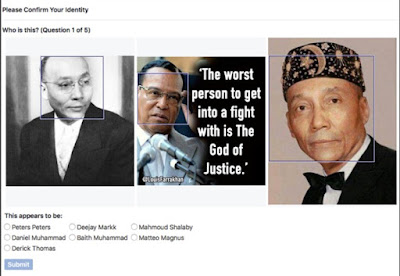 When we publicized this ADL wickedness we were met with an overwhelming response from our supporters and friends. On May 2nd we were again able to access the page. We received no explanation or apology, and since then we have been able to post and communicate with our supporters (and haters) without restriction.
This ADL role in managing our free flow of information MUST be checked by ALL lovers of TRUTH. Our latest published article shows that the “alarming” rise in on-line “anti-Semitism” is Jewish generated. Yet it is this invented “CRISIS” that is used by these demons to stifle voices critical of the Israeli and Zionist role in the earth’s affairs. See “UPSURGE IN “ANTI-SEMITISM” HAS DISTURBING JEWISH ORIGINS”: 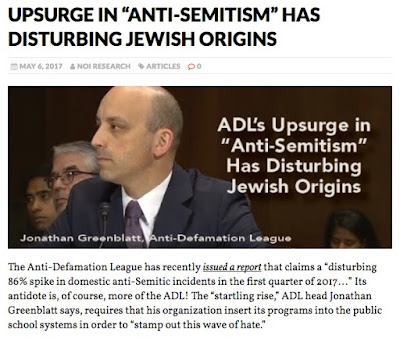 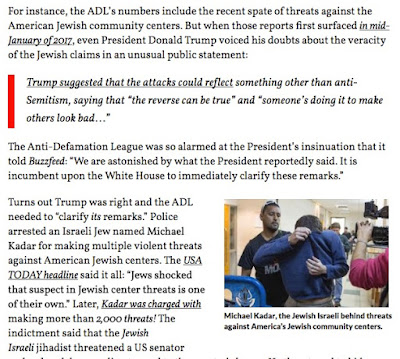 Under the circumstances, we find it difficult to believe that the suppression of Kevin Barrett’s GoFundMe account and the freeze of our NOI Facebook page are unrelated to the 9/11 Symposium sponsored by NOI, which featured Keven Barrett, Richard Gage and especially Christopher Bollyn. We are therefore disturbed that these institutions appear to be under the influence of the ADL in advancing its agenda to suppress legitimate criticism of Israel.
Please follow and like us: