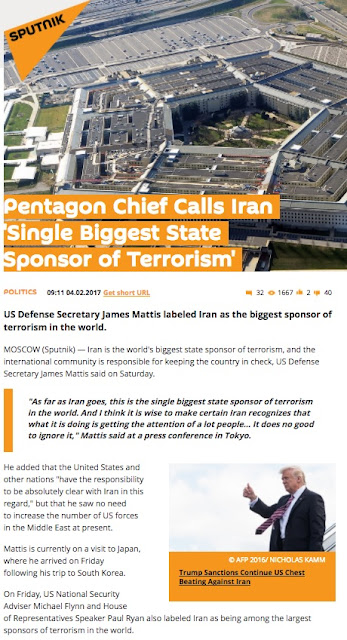 He has declared Russia to be the number one threat to the US.
He has threatened intervention in China’s territorial affairs.
I was wrong. I thought Gen. Mattis was a reasonable choice as he rejects the efficacy of torture, and, according to Trump, convinced Trump that “torture doesn’t work.” Apparently Mattis cannot reach beyond this realization to higher geo-political realizations. Trump needs to fire Mattis who has placed the Pentagon in the way of normal relations with Russia.
There is no evidence in the behavior of Iran, Russia, and China to support Gen.Mattis’ views. His definition of threat is the neoconservative one—a country capable of resisting US hegemony. This is a convenient threat for the military/security complex as it justifies an unlimited budget in order to prevail over such “threats.” It is this hegemonic impulse that is the source of terrorism.
If truth can be spoken, there are only two countries in the world with hegemonic aspirations—Israel and the US—and they are the sources of terrorism. Israel terrorizes Palestinians and has done so for about 70 years. The US terrorizes the rest of the world.
All known Muslim terrorists are creations of the US government. Al Qaeda was created by the Carter administration in order to confront the Soviet occupation of Afghanistan with jihadism. ISIS was created by the Obama/Hillary regime in order to overthrow Gaddafi in Libya and then was sent by the Obama/Hillary regime to overthrow Assad in Syria, as Trump’s national security advisor, Gen. Flynn, former director of the Defense Intelligence Agency revealed on TV. The Ukrainian neo-nazis assaulting the republics of Donetsk and Luhansk were also unleashed by the Obama/Hillary overthrow of the democratically elected government of Ukraine. All terror is associated with Washington and Israel.
The fact of Washington’s overthrow of Ukraine’s government is incontestable; yet large numbers of brainwashed Americans think Russia invaded Ukraine, just as they believe the fake news that Iran is a terrorist state.
The last time Iran initiated a war of aggression was in the last decade of the 18th century when Iran reconquered the Caucasus and Georgia, which Iran soon lost to Russia.
Iran in our time has done no offense except to refuse to submit to being a Washington vassal state.
Additionally, Iran, and Syria rescued by the Russians, are the only states in the Muslim world that are not US puppet states and mere vassals that are nothing in themselves, no independent foreign policy, no independent economic policy. Only Iran and Syria have independent policies.
Iran is a large country endowed with substantial energy resources. Iran has a long history going back to ancient times of independence and military prowess. Today Iran is essential to Russia as a buffer to the US created jihadism that neoconservatives plan to export to the Muslim areas of the Russian Federation. Consequently, Iran is the most inopportune of targets for Trump if he wishes to restore normal, non-threatening relations with Russia. Yet his mad dog Pentagon chief recklessly makes threatening statements alleging Iran to be a “terrorist state.”
Do we see Israel’s hand at work in the threats against Iran? Iran and Syria are the only countries in the Middle East that are not American puppet states. Syria’s army has been hardened by combat, which is what Syria’s army needs in order to stand up to US-backed Israel. Both Syria and Iran are in the way of Israel’s Zionist policy of Greater Israel—from the Nile to the Euphrates. For the Zionists, Palestine and Southern Lebanan are merely the beginning.
Israel has successfully used the corrupt British and now the corrupt Americans to reestablish themselves on lands from which God evicted them. This doesn’t speak well of the intelligence and morality of the British and US governments. But what does?
We are also hearing from Mattis and from Tilerson threats to intervene in China’s sphere of influence. Trump’s appointees appear to be unable to understand that there can be no improvement in relations with Russia if the Trump regime has Iran and China in its crosshairs.
Is there any prospect that the Trump administration can develop geo-political awareness? Is the tough-talking Trump administration tough enough to overthrow the power that Zionist Israel exercises over US foreign policy and the votes of the US Congress?
If not, more war is inevitable.
For twenty-four years—eight years of the criminal Clinton regime, eight years of the criminal Bush regime, eight years of the criminal Obama regime—the world has heard threats from Washington that have resulted in the death and destruction of millions of peoples and entire countries. The Trump administration needs to present a different Washington to the world.

12 thoughts on “Paul Craig Roberts: Is The Trump Administration Already Over?”