Breaking News
Israel is deliberately obliterating media buildings in Gaza to cover up the war crimes that will follow
Jack Mullen, Reality’s Harsh Taste: Civilization Commits Suicide
Ten Absolute Truths About the 2020 Election and Election Fraud That Every American Should Understand
William de Berg, COVID-19 Vaccine Wars and Waves
The people who want to keep masking: ‘It’s like an invisibility cloak’
15 May, 2021
Skip to content

When The Wisconsin State Journal (19 August 2016) published an article by Mark Sommerhauser, who claimed that there is no evidence of the theft of elections in Wisconsin, as Roger Stone had claimed in a recent piece in The Hill (16 August 2016), I was incensed because there is a mountain of proof not only of election theft in Wisconsin but that it has happened here five times, including Scott Walker’s recall election, his reelection against Mary Burke, and the recent primary pitting Ted Cruz against Donald Trump, to which Stone had drawn attention in his article, which the WSJ dismissed: 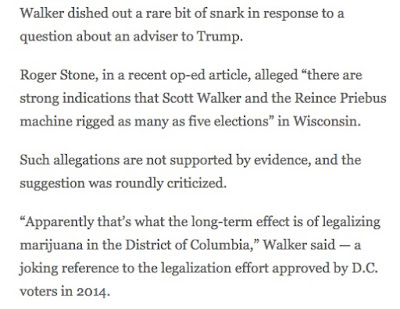 I knew this to be the case from my previous collaboration with Richard Charnin, who is a brilliant statistician and the author of two books on the theft of elections using electronic voting machines, where we had published “Voter Fraud vs. Election Theft: Scott Walker’s Wisconsin Reelection” (10 July 2015), which documented the theft with a series of graphs that prove it. I had hoped writing to the reporter who had published a false denial with copies to the publisher and senior editors at the WSJ, something would come of it. Apparently, the publisher cares no more about the truth than his reporter, who, in my view, deserves to be fired. The Journal is betraying the State of Wisconsin!

Here is the letter I sent:

Mark,
Your article, “Walker: ‘Sideshow’ focus hurts Trump”, includes the provably false claim that allegations of the theft of as many as five Wisconsin elections using voting machines “are not supported by evidence”. But that is simply wrong.
I sent a letter to the editor, which the paper has yet to publish, presumably on the ground that the theft of elections in Wisconsin does not matter to anyone here. After all, while Scott Walker is gutting the state, who should give a damn?

​
The article I cite, “Voter Fraud vs. Election Theft: Scott Walker’s Wisconsin Reelection”, can effortlessly be found on the internet. Apparently, no one at The Wisconsin State Journal cares enough to bother to verify what I am reporting here, which is an abdication of the responsibility of the paper to the citizens of the state, not to mention dedication to truth!

When Roger Stone makes an effort to bring this to the attention to the public, you abuse your position to dismiss his piece either without doing any research to confirm or disconfirm it or by deliberately distortion the facts. The state is undergoing a wrecking operation because Walker and his Republican cronies know they are immune from being removed from office.
Not only are you massively derelict as a reporter but, along with the WSJ itself, a disgrace and a discredit to Wisconsin.
You deserve to be fired!
Jim
James H. Fetzer, Ph.D.
McKnight Professor Emeritus
University of Minnesota Duluth
http://www.d.umn.edu/~jfetzer/
Editor, moonrockbooks.com
Jim Fetzer, a former Marine Corps officer, is McKnight Professor Emeritus on the Duluth Campus of the University of Minnesota Duluth.
Please follow and like us: