Breaking News
Israel is deliberately obliterating media buildings in Gaza to cover up the war crimes that will follow
Jack Mullen, Reality’s Harsh Taste: Civilization Commits Suicide
Ten Absolute Truths About the 2020 Election and Election Fraud That Every American Should Understand
William de Berg, COVID-19 Vaccine Wars and Waves
The people who want to keep masking: ‘It’s like an invisibility cloak’
15 May, 2021
Skip to content
Jim Fetzer
We all know that PROJECT CENSORED advertises itself as an important medium for exposing stories that have been suppressed by the mainstream media. It was therefore stunning to me when, in the wake of the suppression of NOBODY DIED AT SANDY HOOK (2015), I belatedly learned that news of the book’s banning by amazon.com had not made it to their notice. 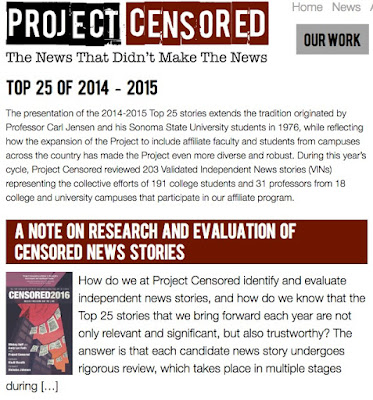 This was huge news in the conspiracy research community, where I would make dozens of interviews and where many articles would be published about this extraordinary event. During my lifetime, the case that seemed to me to come the closest was the suppression of “The Pentagon Papers”, which revealed the evolution of our involvement in the quagmire known as Viet Nam. Here is a sampler of some of the articles that were published about it:
Mike Adams, the Health Ranger, “CENSORSHIP SHOCK: Amazon.com bans investigative book NOBODY DIED AT SANDY HOOK because it disagrees with government version of what happened”
Mike Adams, the Health Ranger, “Amazon is the new Ministry of Truth: An interview with Jim Fetzer, editor of the Sandy Hook book BANNED by Amazon.com“
Glenn Candy, BeforeItsNews, “New Photos Prove Sandy Hook Staged: Amazon freaks out!”
The Government Rag, “Amazon Suppresses and Bans NOBODY DIED AT SANDY HOOK”
And there were many more, where it becomes increasingly difficult to believe that PROJECT CENSORED could have missed the news that something rather stunning had taken place. I have already assumed that an organization dedicated to exposing censorship would be paying attention to what is going on, especially in relation to research on controversial subjects such as this:
“Nationwide media blackout on amazon ban of NOBODY DIED AT SANDY HOOK”, http://jamesfetzer.blogspot.com/2015/11/nationwide-media-blackout-on-amazons.html
“Windows on the World” (UK), https://youtu.be/4qxHiKyonRc
“Nationwide Media Blackout on Amazon’s ban of NOBODY DIED AT SANDY  HOOK”, http://jamesfetzer.blogspot.com/2015/11/nationwide-media-blackout-on-amazons.html
“Amazon suppresses and bans NOBODY DIED AT SANDY HOOK”, http://www.thegovernmentrag.com/amazon-bans-and-suppresses-nobody-died-at-sandy-hook.html
“Five most important books of 2015 that have been vilified, attacked or outright censored”, http://www.naturalnews.com/052178_censored_books_best_reads_2015.html
“Removed Inforwars.com article on SANDY HOOK BOOK BAN has been found”http://jamesfetzer.blogspot.com/2015/11/removed-infowarscom-article-on-sandy.html
“Amazon.com does not ban 19 other books about Sandy Hook” http://fellowshipoftheminds.com/2015/12/02/amazon-com-bans-nobody-died-at-sandy-hook-but-not-other-sandy-hook-books/
So when I discovered that PROJECT CENSORED had not so much as extended an “honorable mention” to the suppression of NOBODY DIED AT SANDY HOOK (2015), I wrote to Peter Phillips to make an inquiry about it. His response was about as excited as a yawn: 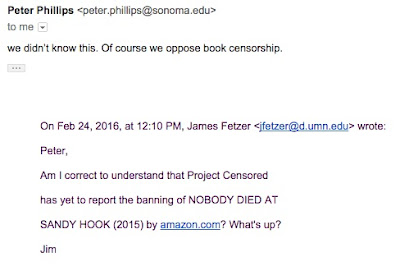 I have since been informed by someone who knows him that Peter accepts the official account of Sandy Hook, which may provide a partial explanation. But whether or not you agree with the contents of a book that has been banned, its occurrence is so unusual and striking that I find it impossible to avoid the inference that they ignored it because that is their role. Were PROJECT CENSORED on the job, they would have been all over this.

They instead appear to be a “limited hangout” conducted to create the impression that they are functioning as an intellectual watchdog, when something closer to the opposite is true. The same appears to be the case with Alex Jones’ inforwars.org, which initially published about the ban but then removed–and eventually even scrubbed–their archives of any trace.

After 1 month of strong sales, Amazon suddenly banned the new book, Nobody Died At Sandy Hook. The book was pulled from Amazon.com, then deleted from customers’ Kindles. 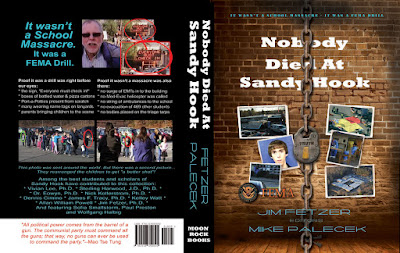 After Amazon pulled the book, Alex Jones’ InfoWars noticed – and published this article exposing Amazon’s book ban. Here’s a screenshot of the article:

To draw attention to their article, InfoWars tweeted a link:

But within hours after that article was published, InfoWars suddenly deleted it from the Web. The InfoWars article simply vanished – without explanation.
This left onlookers wondering who removed the InfoWars article – and why.
Fortunately, some web services save copies of material. Thus, the deleted InfoWars article was recovered – in its entirety [Editor’s note: but I don’t have it so I am substituting one of many interviews I have given about all of this] – from a copy stored by Google Cache.

As folks reacted to this curious censorship (by Amazon; then by InfoWars), the Google Cache copy of the InfoWars article was suddenly deleted as well – replaced with this“404 Error” message.

[Editor’s note: Barry Soetoro, Esq., has highlighted what has to be the reason Inforwars.com took down their article in such haste, which is that photo credit was given to the CONNECTICUT STATE POLICE: 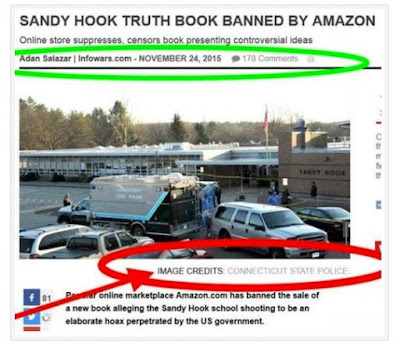 All that effort makes no sense – unless the government is hiding something. Why ban the book to begin with? Why delete the InfoWar’s article about the book ban? Further, why scrub the article from even the cache, so that there is no longer even a trace of the article on the Web?
The State Police Photo
Was InfoWars ordered to delete their article because it includes this picture credited to the Connecticut State Police – showing police preparations at Sandy Hook Elementary School BEFORE the alleged massacre happened? 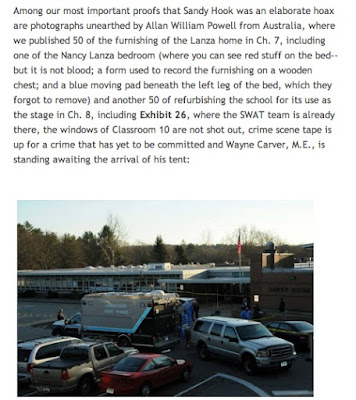 Look at that photo: that’s not how folks behave at a “school massacre” where 27 people lay dead in pools of blood. Why is CT Chief Medical Examiner Wayne Carver casually lounging outside the school, while 20 kids presumably lay inside, freshly murdered? Why is everyone relaxed like they’re enjoying a break on a movie set? 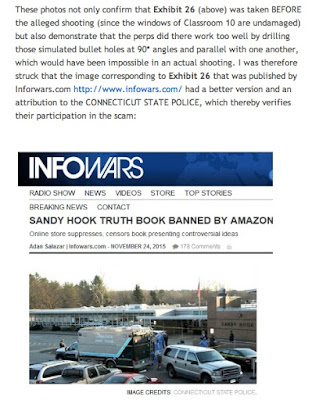 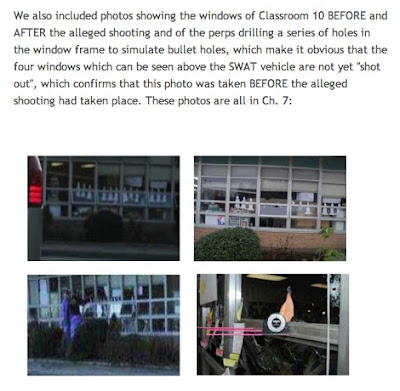 Indeed, some believe the CT State Police photograph was taken during preparations – before any windows were broken – the day before the hoax “went live.” 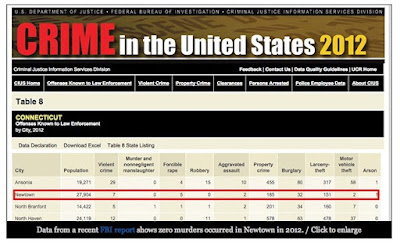 Why Censor The Book?
If Nobody Died at Sandy Hook is “nonsense,” why doesn’t the Regime simply ignore it? Why get the book removed from Amazon (and Barnes & Noble); get an article about the censorship taken down from InfoWars; and then SCRUB the already-removed InfoWars article from Google cache?
The answer is clear: Nobody Died at Sandy Hook is “over the target,” and that’s why it must be taken down. Sandy Hook, the “biggest school shooting in US history,” was a carefully planned hoax to steal your guns, take your freedom, and terrorize your children.
Eric Holder even announced his plan to subvert the US Constitution on CSPAN (video) – by “Brainwashing people” against guns.
The Sandy Hook “shooting” hoax is that treason, foisted on unsuspecting Americans.
To overcome this Amazon/InfoWars censorship, the banned book has been made available as a free PDF: Nobody Died At Sandy Hook.
If you haven’t seen a documentary on the Sandy Hook hoax that repeatedly was taken down from YouTube, watch it now: We Need To Talk About Sandy Hook.
Also see these interviews with James Fetzer (co-editor of Nobody Died at Sandy Hook):
[VIDEO] James Fetzer Interview: Sandy Hook (AMAZON) book ban

Barry Soetoro, Esq is the pen-name of a syndicated columnist focused on Fake Shootings and State Terror. Recently, Barry explored the Newtown CT “massacre” and the background of “Barack Hussein Obama.” [Editor’s note: Where I have done what I can to make this complete, missing some key parts.]
For all the posts FOTM has published on the Sandy Hook hoax, click here.
To read/download the banned book in PDF format, click here: NobodyDiedAtSandyHook.
If you want a hard copy (sure to be a collector’s item!), Fetzer found an alternative printer/distributor for Nobody Died at Sandy Hook — Moon Rock Books. Click here. Check it out and let others know. The pdf will remain available to the public for free.
Please follow and like us:

28 thoughts on “Proof “Project Censored” and Infowars.com are limited-hangouts”