Breaking News
Israel is deliberately obliterating media buildings in Gaza to cover up the war crimes that will follow
Jack Mullen, Reality’s Harsh Taste: Civilization Commits Suicide
Ten Absolute Truths About the 2020 Election and Election Fraud That Every American Should Understand
William de Berg, COVID-19 Vaccine Wars and Waves
The people who want to keep masking: ‘It’s like an invisibility cloak’
15 May, 2021
Skip to content
Paul Craig Roberts
Commentators who have learned to distrust official explanations, such as Peter Koenig and Stephen Lensman have raised questions about the Nice attack.
It does seem odd that a lone person driving a large truck can gain access to blocked off areas where French people have assembled to watch the fireworks of Bastille Day. It also seems odd that the event is branded a terrorist one when the alleged perpetrator’s family says that he was not at all religious and had no religious motivation.
We will never know. Once again the alleged perpetrator is dead and conveniently left behind his ID. 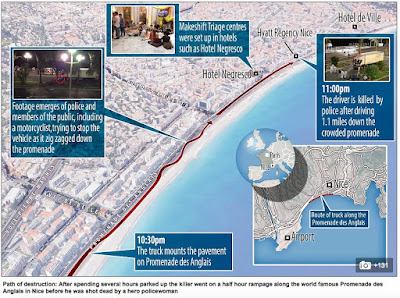 It looks like a permanent state of martial law in France will be one consequence. This shutdown of society will also dispose of the protests against capitalist puppet Hollande’s repeal of France’s labor protections. Those protesting the take-back of their hard-earned rights will be closed down under the martial law.
Amazing how convenient the attack was for global capitalism, the primary beneficiary of Hollande’s new “labor reform.”
Questions raised by Koenig and Lendman call to mind Operation Gladio. Gladio is the codename for a secret NATO operation set up by Washington after WWII as a result of fear that the Red Army would overrun Western Europe. Originally Gladio consisted of hidden arms caches and an organization to conduct guerrilla war against the Soviet occupying army.
Instead of a Soviet Invasion, the threat that emerged was the popularity of the Communist Party in France and especially Italy. Washington was fearful that communist parties would win enough votes to form a government and that Washington’s Western European Empire would be breached as these communist governments aligned with Moscow.
Consequently, Gladio was turned against the European communist parties. The Italian intelligence service together with the CIA began bombing public places in Italy, such as the Bologna train station in which 285 people were killed, maimed, and otherwise wounded. 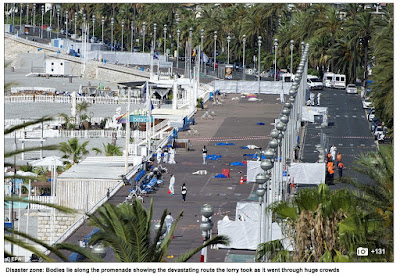 Gladio operative Vincenzo Vinciguerra first revealed Gladio’s existence during his 1984 trial for the bombing of the Bologna train station in 1980. Questioned about the Bologna bombing, Vinciguerra said:

“There exists in Italy a secret force parallel to the armed forces, composed of civilians and military men, in an anti-Soviet capacity that is, to organize a resistance on Italian soil against a Russian army…A secret organization, a super-organization with a network of communications, arms and explosives, and men trained to use them…

A super-organization which, lacking a Soviet military invasion which might not happen, took up the task, on NATO’s behalf, of preventing a slip to the left in the political balance of the country. This they did, with the assistance of the official secret services and the political and military forces.”

It was not until 6 years later, 1990, that the prime minister of Italy, Giulio Andreotti, officially acknowledged the existence of Gladio.

Italian General Gerardo Serravalie commanded Italy’s Gladio’s participation in the first half of the 1970s. Wikipedia reports that he testified that those responsible for planning and coordination “were the officers responsible for the secret structures of Great Britain, France, Germany, Belgium, Luxemburg, the Netherlands and Italy. These representatives of the secret structures met every year in one of the capitals… At the stay-behind meetings representatives of the CIA were always present.”

There were many bombings with many civilian casualties from the 1960s through the mid-1980s. Vinciguerra said:

“You were supposed to attack civilians, women, children, innocent people outside the political arena, for one simple reason–to force the Italian public to turn to the state, turn to the regime and ask for greater security. . . . This is the political logic behind all the bombings. They remain unpunished because the State cannot condemn itself.”

The bombings were blamed on communist terrorist groups, such as the Red Brigades and the Baader-Meinhof gang, groups that might have been real or invented intelligence covers to aid the discrediting of European communist parties. 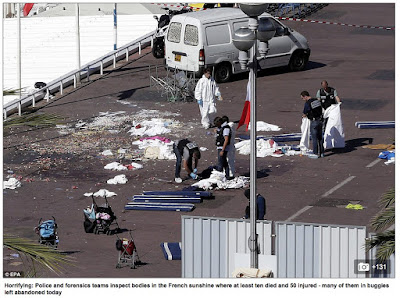 In 1984 Judge Felice Casson reopened a 12 year old case of a car bomb in Peteano, Italy. The judge found that the case had been falsified and blamed on the Red Brigades, but had actually been the work of the military secret service, Servizio Informazioni Difesa (SID) in conjunction with Ordine Nuovo, a right-wing organization created or co-opted by Gladio. The police official who falsified the investigation was sentenced to prison. Judge Casson’s investigation concluded that the Peteano bombing was part of a series of bombings carried out by Gladio including the Milano Piazza Fontane bombing, which killed 16 and injured 80, and the 1980 Bologna railway station bombing, which killed 85 and injured 200.
Based on the Italian revelations, Belgium and Swiss governments undertook investigations of Gladio operations in those countries. The United States government has denied any participation in the bombings. However, Judge Casson’s search of the archives of the Italian military secret service turned up proof of the existence of the Gladio network, and links to NATO and the United States.
Western peoples whose democracies have degenerated into plutocracies are inoculated against the belief that the government would kill its own citizens. Clearly they need to learn about operation Gladio.
Is Operation Gladio still alive and well? The terror events of today are blamed on Muslims instead of on communists. Is it possible that the terror attacks in France and Belgium are Gladio operations?
Addendum:
This large collection of photos from the UK Daily Mail of the Nice attack — some shown above, including a map of the route — does not seem to show any blood in the streets where the carnage is reported to have happened or any blood associated with what are reported to be bodies. The white truck that is reported to be the murder weapon does not seem to show any blood or damage. 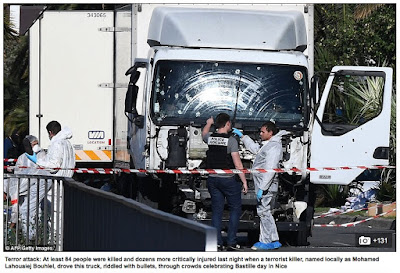 A colleague once hit a deer, and his car was totaled. How can there be 186 people hit and no damage to the truck? Also, among the photos is a video of police standing exposed a few feet from the truck cab firing into the cab. For the police to expose themselves to a lunatic reported to be armed implies that he wasn’t armed or that the truck cab was empty. Why didn’t the police just open the door and capture him, or if he was armed wait until his pistol ran out of ammunition? In all of these attacks, the alleged perpetrator is always killed. Note also that already there are names and photos of the victims and a history of the perpetrator. How can so many photos of so many different people be so quickly collected and so much information collected about the perpetrator? The media never ask public authorities such questions or ever provide answers. It seems the story is prepared and ready to go when the event occurs, and that story is all we ever get.

And what do we make of this? 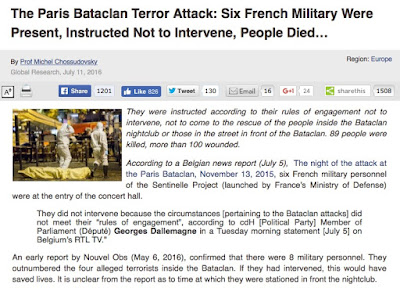 Why would armed French troops on the scene capable of stopping the Bataclan carnage be told to stand down?

Dr. Paul Craig Roberts was Assistant Secretary of the Treasury for Economic Policy and associate editor of the Wall Street Journal. He was columnist for Business Week, Scripps Howard News Service, and Creators Syndicate. He has had many university appointments. His internet columns have attracted a worldwide following. Roberts’ latest books are The Failure of Laissez Faire Capitalism and Economic Dissolution of the West, How America Was Lost, and The Neoconservative Threat to World Order.
Please follow and like us: