Breaking News
Proof that the pandemic was planned with a purpose
Mansour and Pinkerton, The Democrats’ 7-Step Strategy to Win the Election Using Vote-by-Mail Chaos
Mike Whitney, Betrayal, Infuriating Betrayal
State of the Nation, An Open Letter to the American Electorate
BOMBSHELL: Senate Report On Hunter Biden Corruption Is DEVASTATING–Ties to Ukraine, China, Moscow, and Suspected Human Trafficking Ring
28 Sep, 2020
Skip to content

From multiple sources, the evidence continues to mount that Rebekah Roth has been playing the role of a stewardess-turned-9/11-investigator rather than being “the real deal”. It was always a rather incredible evolution from “Coffee, tea or me?” to the straight scoop about what really happened to those airplanes and passengers on 9/11. This is rather on the order of Clark Kent turning into Superman or Kara Zor-El turning into Supergirl. That’s the order of the transformation we are given by Rebekah about herself.

Not to denigrate airline stewardesses (or hostesses, the more common term today), but this woman has too much intellectual power to have ever chosen such a pedestrian career. Rebekah is super smart, extremely intelligent and remarkably articulate. My impression is that she has a photographic memory and has been well-rehearsed for her role in bringing the truth about 9/11 to the public–but there is a price to pay, because her story about 9/11 appears to have covert motives with regard to passengers and planes.

During the Midwest 9/11 Truth Conference in Champaign-Urbana, IL (22 September 2013), for example, I had laid out evidence that all four of the 9/11 crash sites had been fabricated or faked. One element of that proof–far from the most important, but significant, nonetheless–was that Bureau of Transportation Statistics records show that Flight 11 (North Tower) and Flight 77 (Pentagon) were not even scheduled for flight, which makes it very difficult to believe how they could have landed at the airport where Rebekah claims all four planes landed and the passenger phone calls were recorded.

Since we also have FAA Registration Records that show the planes used for Flight 93 (Shanksville) and for Flight 175 (South Tower) were not formally deregistered (or taken out of service) until 28 September 2005, we confront the apparent problem: How can planes that were not even in the air have crashed on 9/11? and how can planes that crashed on 9/11 have still been in the air four years later? My surmise is that Rebekah Roth was conjured as the solution to the problem with her rather fanciful tale.

Gerard Holmgren, for example, an Australian blues musician, had noticed early on that records from the Bureau of Transportation Statistics did not show Flight 11 (North Tower) or Flight 77 (Pentagon) as even having been scheduled that day. Rebekah goes out of her way to trivialize TBS records as nothing but marketing devices, as though the US government did not need to maintain information about flights across the country. She tries too hard to convince us they are meaningless–and for very good reason: 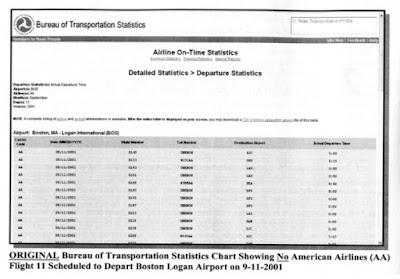 If the BTS records are correct, then Rebecka’s story about the planes cannot be true; they refute her. 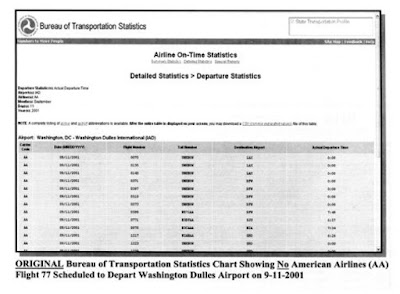 Dennis Cimino spent six hours on the phone with Rebekah and was convinced that she was not “the real deal” on multiple grounds, among which was her declaration that shutting down the transponder would have made the plane invisible to radar, which, as I have previously explained, is not the case, since the transponder sends out a signal identifying the plane, while the planes image on radar is the effect of radio waves being reflected from an object in the air. The first does not affect the second.

Who is Rebekah Roth?

In the discussion thread about my earlier blog about Rebekah Roth, “Rebekah Roth’s METHODICAL DECEPTION: Pros and Cons” (21 September 2015), Jeannon has offered her reflections on listening to her interview with Chip Tatum, whom I know and like. I am a bit troubled that someone who has a background with the CIA would be taken in by Rebekah Roth, but there are too many signs for her to be taken seriously. Dennis had already determined from her phone number that she resides in Langley, which pissed her off when he made that observation. That suggests someone with something to hide.

According to several sources, I have been told that Rebekah’s real name is Monika Gainor. She appears to be working for the CIA, which no doubt appreciated her gifts for instant memorization and smooth articulation. She has blonde hair, but wears a brunette wig and glasses to disguise her identity. They have also told me that, far from being exceptionally skilled at research, she plagiarized (actually, stole) a terabyte of data from a long-time student of 9/11 and appropriated his last 10 years of research as her own.  “Rebekah” frequently claims she has “a terabyte of information”, which is stunning by itself.

Now, I am fallible and capable of making mistakes. My sources are highly credible, however, and what they have told me supports my interpretation of her role as that of reaffirming the existence of the planes and passengers on 9/11. As I explained at the Midwest 9/11 Truth Conference, a great deal of evidence substantiates that none of those planes crashed on 9/11. Since none of the planes crashed, none of the passengers aboard them could have died in crashes that did not take place. I believe Monika has been assigned to skate around the evidence to restore the planes and the passengers as elements of the official account.

I am sure that Rebekah/Monika will learn of this blog in short order, so I want to extend an invitation to her to come on my show, “The Real Deal”, to discuss this and explain why I and my sources are wrong and why she is “the real deal”.  I will line up my sources and their sources to address these issues on the show, where she will have the opportunity to confront her accusers and set the record straight. In case she does not know how to reach me, my email address is jfetzer@d.umn.edu. I look forward to hearing from her. In the meanwhile, here is a recent interview of her with Chip Tatum, formerly with the CIA:

Someone I have found to be exceptionally objective and who follows my blogs has posted comments about the interview, which I want to share more widely. Jeannon has no axe to grind and, in my view, provides a litmus test of Rebekah in relation to her host, Chip Tatum, whom I know personally. So I invite everyone to compare their impressions of “Rebekah” based upon this interview and comment on these issues below. I am sure everyone who wants to know the truth about 9/11 appreciates the point:

My (tentative and fallible) conclusion is that Rebekah is indeed a “crisis actor”, as Jeannon observes, where she is doing her best to convince the public that she has unique insights into 9/11, that there were real planes and real passengers involved, where their deaths did not come about from plane crashes but were compliments of other agents of the government who were involved. It’s fascinating stuff–and if she wants to respond and demonstrate that she really IS “the real deal”, I will be glad to hear from her. I will contact my sources and set up a show, where a confrontation between them can take plane and we can lay the controversy about her, if not about 9/11, to rest. I look forward to hearing from Rebekah.

192 thoughts on “Rebekah’s METHODICAL ILLUSION may be Rebekah herself”

Will on Alison Maynard, Complaint against Bill Gates for Unauthorized Practice of Medicine