Breaking News
Proof that the pandemic was planned with a purpose
Mansour and Pinkerton, The Democrats’ 7-Step Strategy to Win the Election Using Vote-by-Mail Chaos
Mike Whitney, Betrayal, Infuriating Betrayal
State of the Nation, An Open Letter to the American Electorate
BOMBSHELL: Senate Report On Hunter Biden Corruption Is DEVASTATING–Ties to Ukraine, China, Moscow, and Suspected Human Trafficking Ring
29 Sep, 2020
Skip to content
by Phil Nelson

In her review of David Talbot’s new book, The Devil’s Chessboard  (“Checkmate on The Devils Chessboard”, Consortium News October 27, 2015), Lisa Pease provides a succinct summary of Talbot’s impressive work.  With one notable exception, she has nothing but praise for his seminal research. That exception relates to his reference to E. Howard Hunt’s “final confession” identifying LBJ as the top of the chain of command that brought about the death of JFK, which is not congruent with the conventional wisdom she and her fellow “researchers” have been so anxious to avoid.
Her review isolates that premise as follows:

While Talbot has the facts right in the broad strokes, if not all the small details, his focus was, in my opinion, a tad misplaced in spots. For example, he appears to believe E. Howard Hunt’s deathbed “confession,” which many in the research community do not.

Hunt, a career intelligence officer who became infamous as a leader of Nixon’s Watergate burglary team, implicated President Lyndon B. Johnson in the plot to kill Kennedy, which has never made sense to me. If LBJ was so ruthless that he killed his way to the presidency, why did he decide not to run again in 1968? Historically, when people have killed their way to the throne, they do not voluntarily abdicate it. 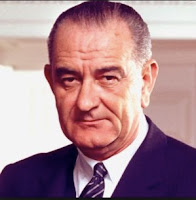 Indeed, as other scholars have discovered, Lyndon not only forced himself onto the ticket in Los Angeles in 1960 by threatening to destroy JFK using information provided to him by J. Edgar Hoover but he even sent his Chief Administrative Assistant, Cliff Carter, down to Dallas to make sure all the arrangements were in place for the assassination. And after the event, he took an active role in managing the cover up, insuring that DA Henry Wade speak no more about “a possible conspiracy” and even calling Charles Crenshaw, M.D., who was responsible for the treatment of the alleged assassin at Parkland Hospital, to ask for “a deathbed confession”. Lyndon Johnson was a “hands on” guy who left nothing to chance.

Ignoring this damning evidence, we have a concise statement from her about why the “research community” is resistant to the premise of LBJ’s direct involvement in the planning and execution of the death of John F. Kennedy:  “Such a concept is simply impossible because five years later, when he had a chance to run for re-election, he chose not to — Case Closed.” But that claim begs for much closer scrutiny.
That she and others have grounded their refusal to explore LBJ’s numerous ties to the “crime of the century” to such a tenuous point is clearly and demonstrably “absurd.”  His criminal record — attested to by the impeccable credentials of Texas Ranger (later U.S. Marshal) Clint Peoples — began decades before the assassination and continued, on increasingly higher levels throughout his administration.  Peoples, for example, would convince a Texas grand jury in 1984 that one of the deaths Johnson had commissioned (through his aides, Cliff Carter and Malcolm “Mac” Wallace) of Henry Marshall, an inspector for the Department of Agriculture, was a “homicide” rather than a “suicide”.

That a man who had been shot five times with a single-shot rifle, had carbon monoxide in his lungs and had been rendered unconscious by a blow to the head could have committed suicide was a complete absurdity from the beginning but was typical of justice in Texas at the time. People’s success, however, came only after LBJ and his aides, were deceased and could no longer be indicted. Unsurprisingly, this development was promptly extinguished by the mainstream media as soon as it was announced and has thereafter remained “untouchable” by the Fourth Estate.

In a four-year-old Salon article (“The Other Kennedy Conspiracy”, November 21, 2011), Ms. Pease declares that she “is an expert on the assassinations of the ’60s in general and the Robert Kennedy assassination in particular.”  The following excerpt from that article summarizes the status of her research into RFK’s murder:

Fact: The CIA was so concerned about Robert Kennedy in the last year of his life that it put spying on him on a par with spying on the Soviet Union, according to a report in the Washington Post after it obtained this data.

Perhaps the CIA was also anxious about RFK because, as David Talbot (the founder and current CEO of Salon) recounted in his 2007 book, Brothers, Robert Kennedy harbored suspicions about the CIA’s possible complicity in his brother’s death. One of Robert’s first calls after JFK’s assassination was to the CIA to ask if the agency had killed his brother. If members of the CIA were involved in the death of JFK, could they afford to let Robert ascend to an office where he’d have the power but to do something about that?

I’m well aware that extraordinary claims deserve extraordinary evidence. I have much more to support what I’ve said here, which I am laying out in book form. I hope only to have cracked your mind open, because Occam’s Razor fails us when the simplest explanation is the carefully planned cover story.

Occam’s Razor, moreover, only applies to alternative theories that explain the available evidence equally well. The book that she stated she was “laying out” has evidently not made much progress since, so until it is published we can only speculate about what she considers so “extraordinary.”  But, had she not been so zealous about protecting LBJ’s tainted legacy for at least a quarter-century, she might have connected a few more of his presidential treacheries into patterns that could possibly explain why Johnson decided to give up on being re-elected.

It had much to do with the precarious position that he had placed himself in — after having won the landslide victory in ’64, how he had been swallowed by his own hubris in creating the Viet Nam quagmire — with his record fall in the polls.  By early 1968, the Tet Offensive shattered the public’s confidence in his handling of the war, Eugene McCarthy had nearly trounced him in the New Hampshire primary, and then Robert Kennedy entered the race, which caused his chances of being reelected to be very much in jeopardy.

Johnson knew his ego could never deal with defeat, even in the early primaries, and decided that he ought to quit the race while he still could.  But an even greater reason may have existed that should not be summarily discarded.  If the provenance of the order to “take out” RFK came not just from the highest echelons of the FBI or CIA but to the person who had control over those agencies, it is conceivable that by March 31, 1968, he had already given Helms and Hoover (et. al.) the order to eliminate any possibility that Bobby Kennedy might one day become president.
It is clear that Sirhan Sirhan did not shoot the fatal shot (one of four fired from behind); and there is mounting evidence of a high-level conspiracy involving the CIA, the FBI and the LAPD.  It follows that clear lines might be traced back to LBJ’s possible instigation of RFK’s assassination.  If that could be proven, another possible explanation for Johnson’s decision to quit the race — merely two weeks after Bobby’s entry  — would become that “Occam’s Razor” that she cites:  by taking himself out of the race he could ensure that almost no one would seriously regard him as the culprit.
There have been many other researchers who have also probably been disappointed that Mr. Talbot even mentioned E. Howard Hunt’s “confessions” — which left open the question of LBJ’s involvement in JFK’s assassination — instead of making a stronger case of Allen Dulles’ key role in the 1963 coup de etat.  Perhaps his work will help to put the onus where it should more properly be placed — at LBJ’s door.  My book, LBJ: From Mastermind to The Colossus, explains in greater depth the reasons the “driving force” behind the assassination could not have been Allen Dulles, where that role could only have been fulfilled by Lyndon Johnson.
Phillip F. Nelson is the author of LBJ: The Mastermind of the JFK Assassination (Skyhorse, 2010; 2011; 2013) and LBJ: From Mastermind to The Colossus (Skyhorse, 2014)
Please follow and like us:

108 thoughts on “THE ASSASSINATION OF JFK: JOHNSON VS. DULLES”

Will on Alison Maynard, Complaint against Bill Gates for Unauthorized Practice of Medicine