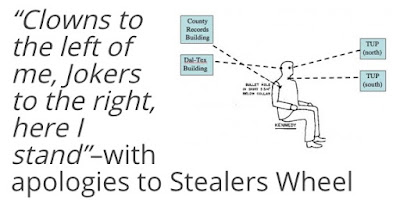 As we approach the 50th observance of the death of our 35th president, John Fitzgerald Kennedy, the disinformation campaign is reaching a fever pitch.
The ops appear to believe that, if they can only manage public opinion past that historical landmark, then it will be “all downhill” because no one is going to care about a 50-year old crime!
Some involve key figures and websites are familiar to those of us who have been engaged in serious research on the assassination, as I have been since 1992, when I organized a research group consisting of the most highly qualified individuals to ever study the case, including Bob Livingston, M.D., a world-authority on the human brain and an expert on wound ballistics; David W. Mantik, M.D., Ph.D., who earned his Ph.D. in physics at Wisconsin, his M.D. at Michigan, and is board-certified in radiation oncology; Charles Crenshaw, M.D., who was present when JFK was brought into Trauma Room #1 at Parkland Hospital and then, two days later, was responsible for the treatment of his alleged assassin, Lee Oswald, in Trauma Room #2; Jack White, a legendary photo and film analyst; and John P. Costella, Ph.D., another Ph.D. in physics but this time with a specialization in electromagnetism, including the properties of light and of images of moving objects.

Here I am going to explain what we know beyond a reasonable doubt as the foundation for evaluating many attempts to undermine the results of the objective, scientific studies by the most highly qualified individuals who have ever studied the case.

My own Ph.D. was earned in the history and the philosophy of science.  I have published widely on the theoretical foundations of computer science, AI, cognitive science, and evolution and mentality.  When I decided to become serious about JFK in late 1992, I invited David Mantik to join me in collaborating on a long article or a book.
The others would join with us very shortly, such that David, Bob and I would participate in a Press Conference in New York on 18 November 1993–in advance of the 30th observance–to present their findings that the autopsy X-rays had been “patched” to conceal a massive blow out to the back of the head and that another man’s brain had been substituted for that of JFK since, once the X-ray was “patched”, there was nowhere for that brain matter to go–with the exception of John Costella, who would become a major player beginning in 2001 and come to fruition with major contributions to the study of the authenticity of the Zapruder film.
We went back to the most basic evidence in the case, including the autopsy report, the autopsy X-rays and diagrams, and worked our way out to the witness reports and the home movies that had been taken during the assassination.  Because science is our most reliable method for determining the truth about the contents of the world, including the laws of physics, chemistry, biology and the like, when highly qualified individuals like these collaborate on a research project of this complexity and importance, there was every reason to believe that good things would come of it.  And our discoveries have included the following: These conclusions have been established beyond a reasonable doubt, in the sense that there is no reasonable alternative for any of them.  They are substantiated inAssassination Science (1998), Murder in Dealey Plaza (2000), The Great Zapruder Film Hoax  (2003) and a host of more recent articles, including “Reasoning about Assassinations” (2005-06), “New Proof of JFK Film Fakery” (2008), “Zapruder JFK Film impeached by Moorman JFK Photograph” (2009), and “JFK: Who’s telling the truth: Clint Hill or the Zapruder film?” (2011).  They are substantiated by the description of the wounds provided to Joe West, an independent investigator, by Thomas Evan Robinson, the mortician who prepared the body for the formal state funeral and spent more time with it than any other person associated with the assassination, where he describes the “large gaping hole in the back of head”, “smaller wound in right temple”, “crescent shape [skull flap], flapped down (3′)”, “(approx 2) small shrapnel wounds in face” [which Mantik inferred had been caused by shards of glass when the bullet that hit his throat passes through the windshield], “wound in back (5 to six inches) below shoulder to the right of back bone”, “Adrenal gland and brain removed”, “other organs removed and then put back”, “No swelling or discoloration to face (died instantly)”:

Insofar as scientific findings are always open to re-evaluation on the basis of the acquisition of new evidence and new hypotheses, it has been gratifying that our conclusions have been reinforced by the research of Douglas Horne, who was the Senior Analyst for Military Record for the Assassination Records Review Board, a five-member civilian panel created by an Act of Congress to declassify documents and records held by the CIA, the Secret Service, the FBI and other agencies, who has published a 5-volume summary of their findings (amplified by more recent work), Inside the ARRB (2009), which has been supplemented by new studies that have been published on Veterans Today, including “US Government Official: JFK Cover-Up, Film Fabrication”, “Reason and Rationality in Public Debate: The Case of JFK”, “The Two NPIC Zapruder Film Events: Signposts Pointing to the Film’s Alteration”, “The Two NPIC Zapruder Film Events:  Analysis and Implications”, and “JFK Conspiracy: The Bullet Hole in the Windshield”.
What is most striking about Inside the ARRB (2009) is the extent to which the documents, depositions and records that were accumulated and released by the Assassination Records Review Board provided further substantiation of our earlier conclusions.  It even turns out that Cmd. James Humes, USN-MC, who was in charge of the autopsy, took a cranial saw to the skull of JFK and enlarged the wound to make it look more like the effect of a shot that had been fired from the rear.  Additionally, the throat wound was greatly exaggerated from a nice, clean puncture wound–which Malcolm Perry, M.D., described three times during the Parkland Press Conference as a wound of entry–into something that looked a great deal more like a wound of exit.  (See, for example, “Dealey Plaza Revisited: What happened to JFK?” and (for those who prefer watching over reading, “What happened to JFK–and why it matters today” (YouTube),
YouTube – Veterans Today –
The conclusions I have enumerated here, therefore, have been substantiated by the additional research conducted by the ARRB and by Doug Horne, just as the fact that Oswald wasn’t even a shooter has been corroborated by new research by Ralph Cinque, D.C., Richard Hooke, K.D. Ruckman, and Clare Kuehn.  (See, for example,“JFK believe it or not: Oswald wasn’t even a shooter!” and “JFK: 49 years in the making — the Altgens Reenactment”.)  But these findings are so threatening to The Warren Report (1964) and demonstrate in passing that even the House Select Committee on Assassinations Final Report (1979) was a cover-up that those who manage these things are now going all-out in their attempts to diminish and minimize what we know now about the assassination of JFK, which in some cases comes from rather surprising sources, as I am now going to explain in detail in “The JFK War: An Insider’s Guide to Assassination Research II”.
Jim Fetzer, a former Marine Corps officer and McKnight Professor Emeritus at the University of Minnesota Duluth, has published three books on JFK and chaired or co-chaired four national conferences about it (Minneapolis 1999, Dallas 2000, Dallas 2001, and Duluth 2003). [NOTE: This is one in a series of articles being republished since veterans today.com deleted them in a dispute with its Senior Editor, Gordon Duff, about which I have since written several articles.]
Please follow and like us:

2 thoughts on “The JFK War: An Insider’s Guide to Assassination Research”