by Larry Rivera with Jim Fetzer 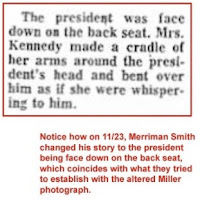 During the House Select Committee on Assassinations (HSCA) meetings reinvestigating JFK’s assassination (1977-78), it was very odd that Secret Service personnel were required to read from their notes what transpired.
Anonymous writes, “I lived next door to Adrian G. (Mr. Pete) Vial, and he confided to me that after the assassination they (SS) were ordered to turn over all of their records, including their field notes, to the FBI.  He was very bitter about this. [It means that] if their testimony to HSCA was from any SS person, it had to be provided back to them by the FBI.”
Larry Rivera has followed up Beverly Brunson’s lead. where she writes, “[T]he (news) papers were full of the event of this cyclist riding up the knoll” I found these newspaper clipping from, of all places, Robin Unger’s site where he posts the front page of 81 newspapers dated 22 and 23 November 1963.

Furthermore, I found astounding reference to both JACKIE AND JFK being on the floor of the limousine as it pulled up to Parkland, where Merriman Smith filed a report for UPI on the 22nd indicating they were on the floor, then REVISED it on the 23rd to say they were on the seat instead.

The photo featured here, technically known as the “Altgens7”, was faked to conceal what happened.
YouTube – Veterans Today –
The first of Larry Rivera’s reports based on Fred Newcomb’s interviews of the escort officers

“The President lay face down on the floor of the limousine . . . . Mrs. Kennedy crouched over him.”

Here, Jackie was on her knees on the floor of the rear seat, with her head toward the president”.

Now they are on the back seat, where Jackie is cradling JFK’s head and whispering to him (which no doubt happened at Parkland), where they had to exert effort to pry his lifeless body from her arms.

These have come from Unger’s site, hiding in plain sight! Notice how Merriman Smith changed his story the very next day!  On 22 November, most dispatches reported the escort motorcycle cops dismounting and running up the knoll, but by 23 November, all these reports had been removed.  I don’t think that anybody has previously bothered to actually read the 81 front pages at Unger’s site.

Larry Rivera, the son of a career military man who served as a CID officer in the US Army, is the leading expert on Billy Nolan Lovelady and on the JFK motorcycle escort officers. Among his previous publications is, “JFK Escort Officers Speak: The Fred Newcomb Interviews”. [NOTE: This is one in a series of articles being republished since veterans today.com deleted them in a dispute with its Senior Editor, Gordon Duff, about which I have since written several articles.]