It has taken me some time to come out about Rebekah Roth and her book, METHODICAL ILLUSION (2015), which has now been supplemented by her second, METHODICAL DECEPTION (2015). I learned of her book six months or so ago from my friend, Dennis Cimino, who was the Navy’s top electronics trouble shooter before he left and joined Raytheon. Rebekah had contacted him in an effort to gain his support for her work, where they spent some time (around six hours) in conversation.

Dennis told me that he had been bothered by some of the technical aspects of her account, including that turning off a plane’s transponder (which emits a signal identifying the flight) does not take its blip off a radar screen (which is created by radio waves bouncing off an aluminum aircraft in the air). And he told me he was also concerned that she was maintaining that, were a plane taken over by a “flight termination system” (a remote control manager), then there would be no way for the crew to notify the FAA of a hijacking in progress. So he sent it to me and I read it instead.

A question on a talk show

A few weeks ago, I was on a talk show and a guest called in to ask about Rebekah Roth. Knowing that she did not have everything right, I replied that I had read her book and liked a lot of what she had to say (especially in her analysis of the purported “phone calls from passengers”) but that she did not have everything right, that I had planned to compose a review of her book but had not done it yet, which I thought was a fair statement of my position about Rebakah. The next thing I knew, she had launched an attack on me from her facebook page as follows: 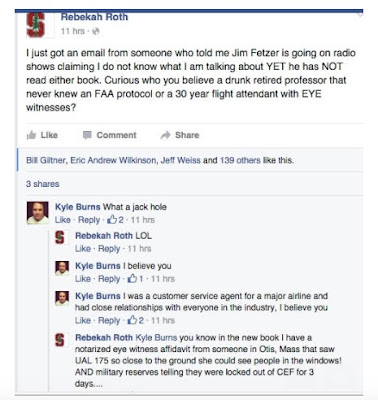 This was disconcerting, since she had not even bothered to determine what I had said about her work before attacking me. That suggested to me that she was not receptive to criticism, which is inevitable in 9/11 research. And I had pointed out when I replied to the question that, indeed, I had read her book.

My response to her attack

When I discovered she was attacking me, I took the opportunity to post some replies, which were all very professional and straightforward. Here is an example, where she responded by turning her page “PRIVATE” to make it impossible for me to continue to comment, which I found revealing by itself: 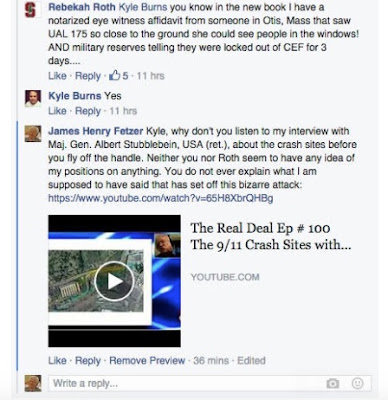 All the crash sites were fabricated or faked

I thought it was important to cite my interview with General Stubblebine, USA (ret.), because, given he was in charge of all US military intelligence during his career and agreed that all four 9/11 crash sites had been fabricated or faked (albeit in different ways), a crucial aspect of Rebekah’s position is that all four of the planes were diverted to Westover, MA, Air Force Base, the location from which she claims the “passenger phone calls” were made, where some were killed before and some after making them:

That has caused me some concern over the prospect that she had taken “data points” that have been raised by students of 9/11–the faked phone calls, the fabricated “crash sites”, and so on–in order to account for them–to “explain them away”–as part of a novel theory that reasserts the role of real planes on 9/11, where the evidence that I had reviewed with Gen. Stubblebine suggested planes were not involved. As Hollywood knows, it can be easier–often, much easier!–to fake events than to carry them out, especially when their performance would entail violations of laws of aerodynamics and of physics.

A few days ago, Susan Lindauer, a former CIA asset who was the liaison between the agency and Saddam Hussein, invited me and Dennis to come on her show and, in part, if we were willing, to address our issues with Rebekah Roth, where Susan was open about being one of Rebekah’s supporters. We both liked the idea and went on her show on Friday, 19 September 2015. Here is Susan’s summary with a link to the show, which makes our concerns about METHODICAL ILLUSION (2015) conspicuous and clear:

Whether the listening audience believes in holograms or drones in New York, these two experts prove why commercial airline jets played no role on 9/11, either at the Pentagon or at the World Trade Center.

As Fetzer puts it, there are four faked crash sites on 9/11, using different means and methodologies, but all with the same result. Fetzer and Cimono have co-authored a series of articles on Veterans Today. This is a great show! Hope you will enjoy it! 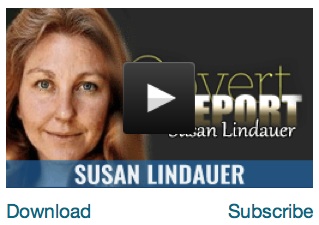 To listen to our interview with Susan Lindauer, click here: The Covert Report 19/09/2015

Rebekah was not a happy camper

My impression is that Rebekah was not pleased by our conversation with Susan Lindauer on Truth Frequency Radio and has apparently gone so far as to quit her own show on that network in protest. But that would seem to be another over-reaction, comparable to her attack on me for suggesting that “She doesn’t have everything right!” As someone who had advanced theories of his own about 9/11, she cannot expect that her work will not be subjected to minute examination, where some will find her work impeccable and others may have certain reservations. 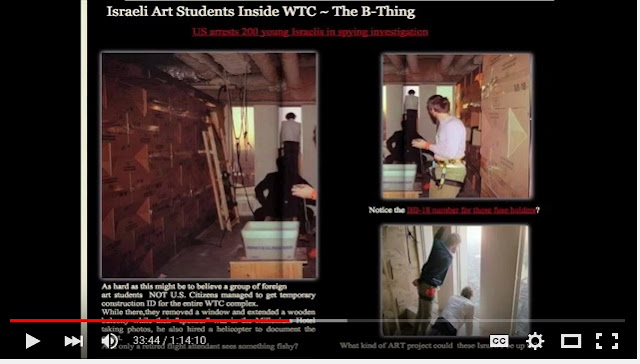 What I like the most about her research is that she has no hestitation in identifying Israel and the Mossad as key players in the 9/11 attacks. She addresses the key role played by the Gelatin Group, which was composed of Israeli “art students”, who had (what appears to have been) complete access to the buildings and staged “performance art” on the outside of their structure. I am very much inclined to believe that they prepped the facades with explosives (or themite or nanothermite) to create the cut-out images of non-existent planes (faked using holograms) to convey the impression that they were real.

Among the important points she brings out is that the Gelatin Group had boxes upon boxes of special fuses holders, which look very much as though they would have been appropriate to hold charges in place on the outside of the towers to create those cut-outs behind the smoke and haze that obfuscated what was going on–apart from those “points of light”, Richard Hall has discussed in his fascinating study, where I have on occasion observed that this may be what George H.W. Bush was talking about when he refereed to “a thousand points of light”:

There can be scant doubt that Rebekah has made a major contribution to 9/11 research by focusing attention on the role of Israel and the Mossad, especially in relation to the Gelatin Group. The kinds of questions her work raises about her include how someone who says she was a stewardess for 30 years could not know that turning off a transponder is not going to remove a blip from a radar screen and why she would suggest that, once a plane had been taken over by remote control, the pilots and crew would have no way to signal that their plane had been hijacked.

Figuring out the How, the Who and the Why

Dennis has a great deal of flight experience and, as he explained in our Friday interview with Susan Lindauer, her story of one of the planes coming in for landing at Westover AFB from 21,000′ when it was only nine miles out and traveling eight miles a minute was unreasonable: it was not an approach that any pilot would have undertaken. And there is no way the FAA would have allowed P-tech to bypass all of the electronic methods the aircraft can use as duress signals or duress situation signaling capability. As Dennis is the first to acknowledge, after talking with her at length, he had decided not to read her book.

The image of the plane hit and the image of the gash occur in the temporal sequence of first/second, but the first did not CAUSE the second. This is an elementary fallacy known as Post hoc ergo propter hoc (after this, therefore because of this). Whatever other faults her work may display, Rebekah Roth has reignited a lot of interest in 9/11 and drawn new students to the case. It may take some time to distill the ultimate impact of her books, which appear intended to revive belief in the use of real planes on 9/11. The weight of the evidence is against that, but nonetheless we welcome her contributions to its study.