The crux of The Warren Commission Report (1964) is the claim that the same bullet that hit JFK in the back also hit Gov. John Connally, which the report itself downplays the “magic bullet” theory as “not necessary to any essential findings of the Commission”.
That is complete rubbish, however, since if the same bullet did not both exit JFK’s throat and enter John Connally’s back, then those wounds have to be accounted for on the basis of separate shots and separate shooters, which implies a conspiracy to kill JFK.
A mountain of evidence proves that the shot that hit JFK in the back did not enter at the base of his neck but 5.5″ below the collar to the right of the spinal column, which was a shallow shot at a downward angle, making it all but impossible it should have taken an upward turn to exit his throat.

Jim Garrison vs. The Warren Report

With a deft verbal sleight-of-hand, the Warren Commission downplayed the significance of the “magic bullet” theory, where no less an authority than Michael Baden, M.D., the one-time medical examiner for New York City and head of the medical panel for the House Select Committee on Assassinations (HSCA) when it reinvestigated the case in 1977-78, has observed, “If the magic bullet theory is false, then there had to have been six shots from three directions”, which makes its tenability of enormous importance.
When we “look inside” The Warren Commission Report (1964), here is how it describes the matter (on page 16) after maintaining that the weight of the evidence “indicates” that only three shots were fired:

That Governor Connally’s testimony should have given them pause is unsurprising, since he maintained until his death that he had been struck by a separate bullet and not by the same bullet that hit JFK.  Here is a critique of the Warren Commission’s stance by New Orleans District Attorney, Jim Garrison, to wit:
YouTube – Veterans Today –
So which is correct?  Was JFK hit at the base of the back of his neck as the Warren Commission claims? or is Jim Garrison right and the “magic bullet” theory is a fairy tale?  It turns out that there is a great deal of evidence that settles the question beyond a reasonable doubt.  Just consider the following for yourself.

Where was JFK hit in the back?

I presented a lecture at Cambridge University during an international conference, which was published in an international peer-reviewed journal under the title, “Reasoning about Assassinations”, which I thought had settled the matter.  Here is the shirt and the jacket he was wearing, left behind at Parkland:

They both show holes about 5.5″ below the collar and just to the right of  the spinal column. During one of his visits to the National Archives, David W. Mantik, M.D., Ph.D., had a member of the staff put them on and determined that the hole in the shirt was slightly lower than the hole in the jacket.  While some want to maintain that they were “bunched”, a wound at this location appears on the autopsy diagram:

The autopsy diagram was verified by Admiral George G. Burkley, the President’s personal physician, who also composed a death certificate on JFK, which described his death as the result of a massive wound to the back of the head and a second wound to his back at the level of the third thoracic vertebrae:

It will come as no surprise that the third thoracic vertebra is about 5.5″ below the collar, which confirms the other evidence from the shirt and the jacket he was wearing and the autopsy diagram.  So we know where JFK was hit in the back, which was not at the base of back of the neck but 5.5″ below the collar.

As though that were not proof enough, we also have an FBI Agent by the name of Sibert drew a sketch of the wound to the back in relation to the wound to the throat, which makes it very difficult to believe that a bullet that entered at the location he specifies at a downward angle could possibly have exited his throat:

And we have a great deal more, including Warren Commission staff reconstruction photos. Here is my favorite from the history of research on the assassination, featuring a young Arlene Specter, who is in the process of demonstrating the trajectory that the “magic bullet” would have taken where that theory true::

Since you can look below his hand and see the large patch on the back of the stand-in where the bullet had hit, a photograph intended to illustrate the “magic bullet” instead refutes it.  And here the person who spent the most time with the body preparing it for burial describes the wounds that he observed:

Notice, in particular, that, in addition to the massive blow-out at the back of his head, the entry wound at the right temple and the small shrapnel wounds in his face, that the body had a “wound in back (5 to six inches) below shoulder to the right of back bone”.  How much more proof do we need about its location?

Larry Rivera, whom I regard as one of the best of a new generation of students of JFK, has unearthed an obscure memorandum.  On 27 January 1964, Leo Gauthier and Special Agent Lyndal Shaneyfelt of the FBI met with Warren Commission staff members Joseph Ball, David Belin, Melvin Eisenberg and Norman Redlich.   The Secret Service was represented by Inspector Thomas Kelley, and John W. Howlett. 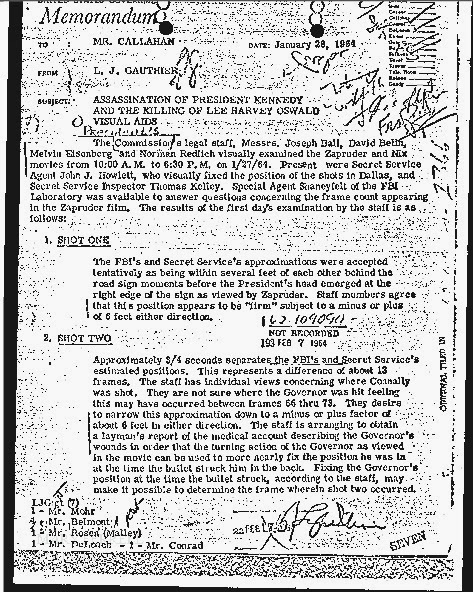 This meeting lasted eight and a half hours and its purpose was to discuss the Zapruder and Nix films and how they were going to frame the three shots to coincide with the film evidence. The most important part is the first paragraph on the second page, as you will observe, which appears to mark the origin of the “magic bullet” theory. It was not taken seriously at the time but would emerge as the crux of the official account by the publication of The Warren Report. 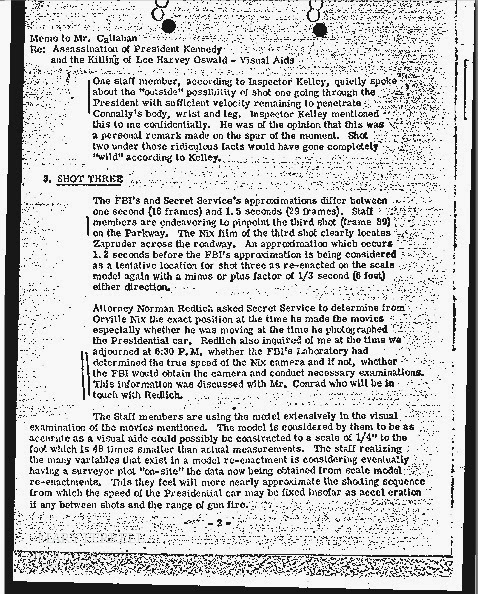 Bear in mind that the Secret Service and the FBI had both concluded the day of the assassination that there had been three shots and three hits: that JFK had been hit in the back (5.5″ below the collar) by the first shot; that Governor Connally had been hit in the back by the second; and that the third shot had hit JFK in the back of his head, killing him. That scenario would be upset by the discovery that James Tague, a distant bystander, had been injured by a shot that missed, which created the dilemma of adding a fourth or doing it all with only two. 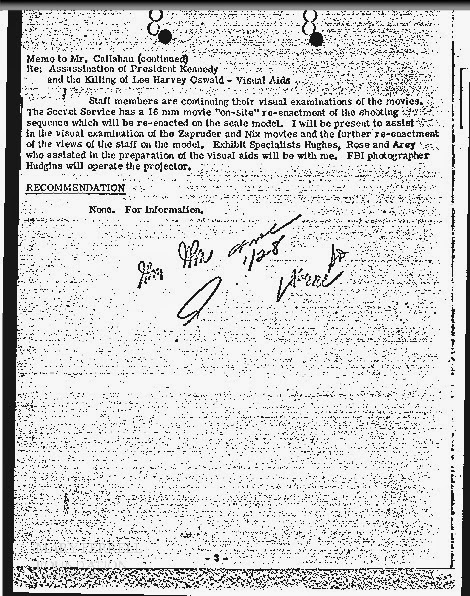 The birth of the “magic bullet” theory

Apparently, this is when the bastard child known as the “magic bullet” theory was initially conceived. The cryptic passage highlighted here points the finger at “one staff member”, but which of the four would that have been?  Even though Kelly dismisses this as a “ridiculous” notion, it would become incorporated as the lynchpin of The Warren Report (1964), in the absence of which there had to be at least six shots from three different directions:

The FBI appears to have been only interested in brokering the meeting and to have avoided becoming involved in the scheming. The Secret Service is on record here as rejecting the “magic bullet” theory as ludicrous, where it would be left to Arlene Specter as an Assistant Counsel to the Warren Commission to present the case for such an absurdity, but with a little help from Gerald Ford (R-MI), who changed the description of the back wound from “his uppermost back” which was already an exaggeration to read instead “the back of his neck”, whose role was revealed by documents released by the ARRB and promptly reported in The New York Times (3 July 1997):

It would turn out that the “magic bullet” theory is not even anatomically possible, as David W. Mantik, M.D., Ph.D., would demonstrate by creating a CAT scan of a patient with chest and neck dimensions similar to those of JFK.  When the official trajectory is imposed, it turns out to be anatomically impossible since cervical vertebra intervene.  That any serious person should continue to defend it is simply beyond belief as a manifest absurdity.

The reason to insist on the “magic bullet” theory–even though it is false, provably false and indeed not even anatomically possible–is that it provides the simplest proof of conspiracy in the assassination of JFK.  Merely by locating where he was hit in the back, we can establish that the wound to his throat and the wounds to Connally have to be accounted for on the basis of other shots and other shooters, which is why the media continues to lie to us.

Where did the bullet come from?

Once you understand where JFK was hit in the back–about 5.5″ inches below the collar to the right of his spinal column by a shallow shot that only entered about the length of your little finger at a downward angle and had no point of exit–it becomes effortless to lampoon the “magic bullet” theory, as was done so well in Oliver Stone’s film, “JFK”.  Here is a diagram of the preposterous trajectory and and image of the “magic bullet” itself as well:

It has been widely assumed that Jack Ruby planted the “magic bullet” on a stretcher at Parkland Hospital on the day of the assassination. Imagine my astonishment to learn from a former neighbor of Secret Service Agent Sam Kinney, who drove the Secret Service Cadillac that followed the Presidential limousine, that Sam had confided in him that he had gone to the limo at Parkland and obtained a bucket of water and a sponge to wipe the blood and brains off the back seat–and in the process found a whole bullet, which he took inside the hospital and left on a stretcher.  It appears to have been the bullet that hit JFK in the back, which worked itself out and fell on the seat.
Sam asked him not to reveal what he had been told until after his death, which occurred in 2000.  His neighbor decided to wait until his wife had joined him, which took place in 2008.  I was delighted when he came on my show to share this information with me on “The Real Deal” on 20 November 2013.  I have said before and say again that if we know anything about the assassination of JFK, it is where he was hit in the back. Which means that anyone who continues to promote the “magic bullet” theory is either cognitively impaired or unfamiliar with the evidence–or attempting to play the public for saps.  Don’t let them get away with it.  You have the proof.
YouTube – Veterans Today –
Larry Rivera has made many contributions to JFK research and has become the world’s leading expert on Buell Wesley Frazier, who was used by the commission to implicate Lee Oswald for a crime he did not commit.  He participated in the JFK 50th Conference held in Santa Barbara on 22 November 2013.


James H. Fetzer, a former Marine Corps officer, is McKnight Professor Emeritus at the University of Minnesota Duluth and a columnist for Veterans Today, where his most recent studies of the assassination of JFK can be found. [NOTE: This is one in a series of articles being republished since veterans today.com deleted them in a dispute with its Senior Editor, Gordon Duff, about which I have since written several articles.]
Please follow and like us: