I just finished listening to the Stubblebine interview, which was truly remarkable. Once again, it impressed on me how LITTLE some of these top Generals probably know in general(!) … about what is really going on … because they just blindly trust their government. He’s done pretty good though, all things considered.

Now, you two were discussing the Pentagon surveillance videos and I was just looking at these again in the last couple of days so it was rather co-incidental that some of my recent observations fit in so well with what you were talking about.

Stubblebine suggested that the object in the video would likely be a missile, which is what I’d been thinking, too … until now. Just an assumption which I’d never really bothered to analyze.

When I looked closely at the video again, several things really stood out. Here are the frame sequences from the 2 selected cameras which were released to the public. 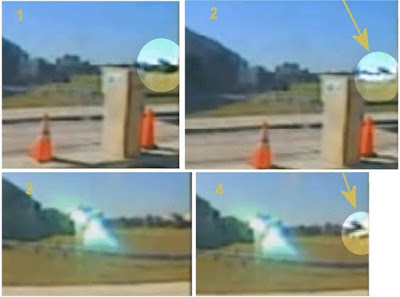 On the top is the “#2” video and on the bottom is the other one. I’ve highlighted the “smoke trail” on the top and the “nose” of the plane at the bottom.

So maybe it’s a missile?

This plane was supposed to be going at about 490 mph … which is 725 feet per second. That’s about half the speed of a rifle bullet.

If it was a missile, it would probably be moving about as fast as a bullet.

To CATCH a clearly defined nose of the device or even the vapor trail (so clearly delineated on the top video) … the camera would have needed to utilize an incredibly fast shutter speed to stop the action. Surveillance cameras of the time didn’t use shutters at all; they scanned continually. Any motion of that speed then … would have created an indistinguishable blur on the scene.

As far as I know, those cameras took a picture every second or so … but they had no shutters. They simply scanned the sensor from top to bottom like you read a book: left to right and down on each line. That means  …. as the object moved to the left and the scan was progressing downward, the bottom of the image would appear to be further left than the top of the image … a kind of diagonal distortion. 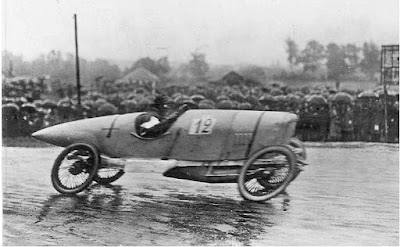 This is a rough example of the effect, but taken with a vertical slide shutter camera in the old days.

The bottom of the wheels appear to be “ahead” of the top of the wheels … because the race car is moving fast to the left and the shutter slit on the camera is moving downwards. Same effect as a moving, scanning spot on an old CRT television screen.

The analog TV system used raster interlacing … to reduce flicker. There were 525 lines in total on the screen with 30 frames per second, consisting of two consecutive fields, each containing 262.5 lines, produced at 60 times a second. Field one would scan odd lines -1,3,5 etc. to the bottom and then go back to the top and scan field 2 … the even lines 2,4,6 etc to the bottom. So each frame was scanned twice from top to bottom with the scan lines interlacing.

Any rapid motion then would not only pull to the direction of movement diagonally but … on field two, the image would already be shifted and would shift again … creating the effect of a double image on the screen … diagonally pulled and hopelessly blurred!

So it would be impossible to catch anything but an indistinguishable blur on any surveillance camera of the analog type … with anything moving that fast … regardless of how MUCH of the image was captured.

But here are a few more things I noticed while examining the videos again.

Here’s a sequence of 4 consecutive frames from camera 2: 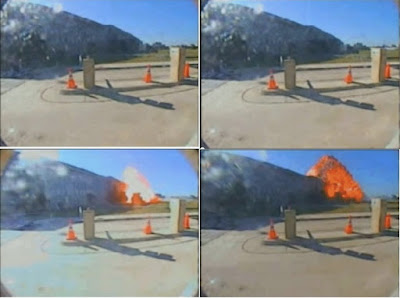 Notice how the bottom left frame -the one ostensibly showing the strike (with a vapor trail still behind it)- shows the corner edges of the lens much larger than the other frames. Now how is that possible if all of these frames come from the same camera in the same time frame as the others?

Look at the top left of this frame and you see a “cloud” and sky … where the other frames show building. Why is the ground blued up? And why is there an additional shadow in the shade of the Pentagon, not present in the other frames? (And why didn’t the tower strike create a similarly bright flash when that plane hit?)

This had to be one brilliant flash … to light up the Pentagon like that!! I’d kept thinking previously that the white flash was likely caused by some magnesium tip or depleted uranium tip on a missile … but now I’m convinced that this isn’t even real video at all.

1) Frame 3 has the larger dark corners. It has to be a frame from another video, inserted and doctored up.

2) The white flash produces a red “shadow” on the structure in front of it??

3) The orange fireball is totally symmetric, enveloping a large part of the building, but no debris is flying out of that explosion.

4) In subsequent frames … taken 1 second apart — in the space of 4 seconds — the fireball immediately vanishes and a small amount of smoke begins to wisp out and then turns to massive smoke. This is totally unreal.

5) Look carefully where that vapor trail was going on frame 2. On frame 3 you see a black line to the left of the garbage can in the foreground and then in frame 4, you see the black line extending all the way to the right. 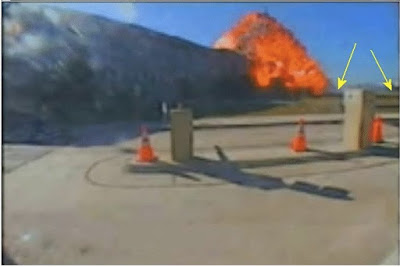 But that line isn’t in the first two frames. I’m guessing that this is where the gouge of the plane hitting the ground … was supposed to be!

Only problem with that is … there was no gouge on the ground, right?

And then … go a few frames forward from this last one and … suddenly the entire scene goes blindingly white! 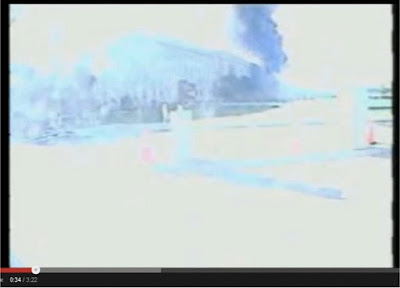 Looks like they got this frame out of sequence because the smoke is already pouring out of the structure! I reckon this is where the initial impact was supposed to show a blindingly white flash … but it comes a bit too late.

So I now believe that the entire thing was photoshopped and shows NOTHING that was really happening. This is why they’re not releasing the other 80+ videos: it’s just TOO MUCH WORK to doctor them all.

8 thoughts on “9/11: Even the frames from the Pentagon were faked”