Breaking News
SOTN, THERE WILL BE NO SECOND CHANCE
Edward Hendrie, Retracted Johns Hopkins Article Proves COVID-19 Death Statistics From the CDC are Manipulated
Richard Stenger, How a Guy in Temecula Could Save the Election for Trump
JAMA, COVID-19 and Excess All-Cause Mortality in the US and 18 Comparison Countries
Jim Fetzer, The Real Joe Biden vs. The Actor “Joe Biden”
03 Dec, 2020
Skip to content

Listen to Joel Skoulsen, the editor of World Affairs Daily, specializing in “hidden agendas” that are at work in the world today. His comments (from 10:20-27:20) are highly revealing for disentangling info from disinfo on the internet. Joel talks about the militarization of local police departments. President Obama has stated he opposes this, but only for special cases of equipment, such as tracked vehicles, which are seldom provided to those departments. Other kinds of military equipment are still allowed, including fully automatic weapons, which is not good public policy.

Cell phone photos and videos are making an impact, including in relation to JADE HELM. The Boston marathon was used to bring massive military presence into a major American city in violation of Posse Comitatus. Terrorism is not taking place in the US since 9/11–except when conducted by authorities, especially the FBI employing agents provocateur. We have had no “cross border” attacks since 9/11, where, if ISIS or al Qaeda were real, could be effortless created. But ISIS was created by US and UK officials to manipulate public opinion by means to political theatre:

ISIS could not have come from nothing to a powerful force (with parades of vehicles and tanks) unless it had been sponsored by Western nations. The whole plan has been to create a threat that would move the American public to support sending 10,000 more troops for three years, where they are not for the purpose of defeating ISIS but to move against Assad and Syria. Assad did not use chemical weapons; it was faked to create a justification for Obama to lob cruise missiles into Syria. 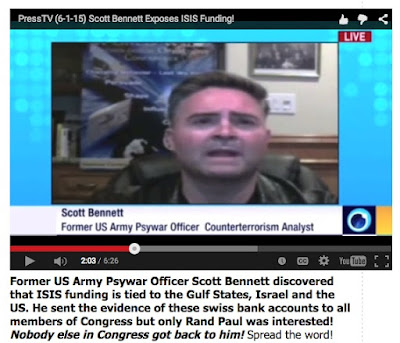 The US is in Yemen with the Saudis to take down the Houthis because Yemen has been a channel for the provision of weapons to be used agains Syria. As Wesley Clarke explained, the US is trying to take down Assad as one of the last two states in the program to dismantle seven governments over the next five years, where Syria and Iran are the two that are still standing. ISIS has been created by and backed by the United States, where the hypocrisy of the United States is almost beyond belief–where the US is creating the war to keep the public in a state of fear and manipulation by terror.

Thanks to Judicial Watch, we now have the DIA (Defense Intelligence Agency) document that planned the creation of ISIS as a mechanism for the isolation of Syria. That it would come at the expense of Iraq did not factor into the equation, where removing Syria turns out to be indispensable to the final stages of the planned perfidy by the United States in relation to those seven Arab nations (where Iran is in fact not an Arab nation but a Persian nation that has not attacked any other nation since 1775). 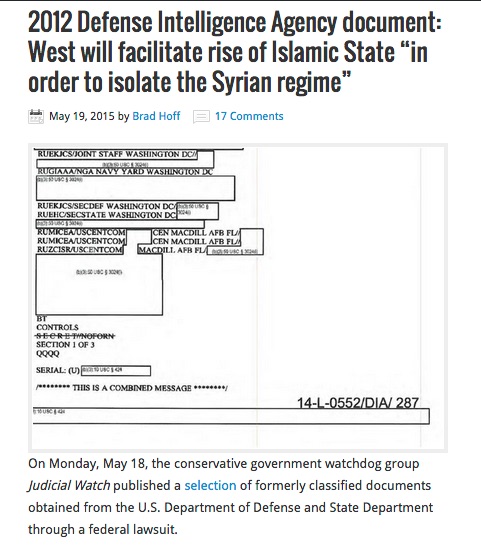 The leader of ISIS has been identified as an agent of the Mossad, where the US has been conducting bombing missions in Syria, not to attack ISIS, but to weaken Assad by taking out gain silos, bridges and other elements of the Syrian infrastructure. ISIS is being advised by two retired American generals, where Sen. John McCain even flew to Syria and was photographed with the leader of ISIS. The story in Washington, D.C., is that ISIS is known as “John McCain’s Army”, of which the Senator is proud:

Remarkably, the Iraqi Army is doing more to attack ISIS than the US, where it recently shot down two UK cargo planes that were providing supplies to ISIS and then, a week later, shot down two American helicopters that were doing the same thing. The hypocrisy of the United States is breathtaking, except that we have been on the wrong side of events throughout the late 20th and now the 21st C., including Chile, Guatemala, El Salvador, Nicaragua, Vietnam, Laos, Cambodia, and now the Middle East. 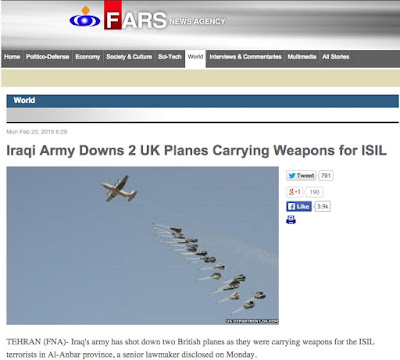 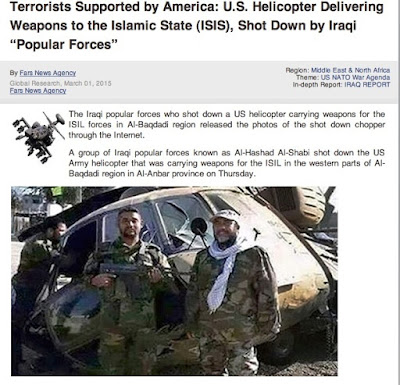 Among the most bizarre developments yet is that ISIS has denounced 9/11 conspiracy theories, which should come as no surprise, since they include those that identify the key players as the CIA, the Neo-Cons in the Department of Defense and the Mossad.  And we even find ourselves where a Lt. General is warning of ISIS attacking the United States by moving into the country from the Caribbean! This is about as absurd as it gets, only exceeded by ISIS complaining about the “false flag” attack of 9/11. 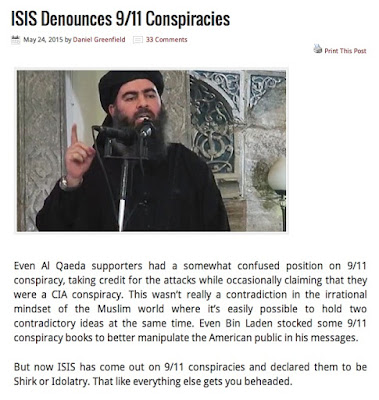 As though to compound one absurdity with another, we have a Marine Corps Lt. General explaining to us the concern of the US military that ISIS may infiltrate the United States through the Caribbean, which would be an entity created by the US attacking the US. The simplest solution to this “problem”, of course, would be to simply cut off its funding, which we are providing. But that won’t do when the objective is to instill fear into the American public to make us feel increasingly more dependent upon our government and especially what the military, which we have so lavishly funded for all these many years, can do to keep us safe and sound. What stunning hypocrisy!

The word is gradually getting out

Here is a show called “Truth vs. NEW$” produced in Seattle by one of its community affiliates, where I have been featured several times. It has a folksy atmosphere, but seems to draw a large audience for shows of its kind. So I present it here for those who would like to hear me discuss the very subjects of this article during a televised presentation, where I am grateful to Don for producing the show and for featuring me as often as he does. The public needs to be informed!

SOTN, THERE WILL BE NO SECOND CHANCE

Richard Stenger, How a Guy in Temecula Could Save the Election for Trump

7 thoughts on “ISIS and other atrocities “Made in the USA””

SOTN, THERE WILL BE NO SECOND CHANCE

Richard Stenger, How a Guy in Temecula Could Save the Election for Trump

Don on Jim Fetzer, The Real Joe Biden vs. The Actor “Joe Biden”