US propaganda against Russia could lead to nuclear winter 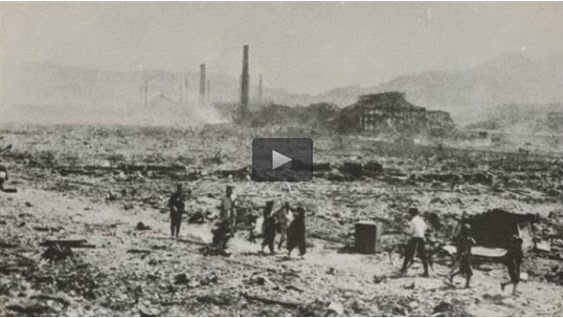 Nagasaki after an atomic bomb in August 1945. Click here to listen to the interview.

Washington’s unprecedented propaganda campaign to demonize Russia and President Vladimir Putin could lead to a nuclear catastrophe, according to an American scholar in Madison, Wisconsin.

Professor James Henry Fetzer, an editor at Veterans Today, made the remarks in an interview with Press TV on Sunday while commenting on a former White House official’s article in which he warned that the US is pushing the world towards a nuclear armageddon.

“The propaganda campaign attempting to demonize Vladimir Putin and Russia is reaching unparalleled heights today, as Paul Craig Roberts has astutely delineated in his recent report about the frightening combination of extreme disinformation unrelated to the realities of the situation in the world, with 450 US ICBMs on hair-trigger alert, which, as he correctly observes, could lead to a nuclear catastrophe,” Fetzer said.

“The question that has to be raised is why all of this propaganda is taking place which is so pervasive, so extensive, so intense, which I believe can only be understood against the background of appreciating why any nation or party would have an interest in or benefit from demonizing Vladimir Putin and Russia,” he added.

“It appears to me is that the motives trace back to Israel and Benjamin Netanyahu who is outraged that Russia is providing Iran with advanced air defense systems, that are going to make all but impossible for Israel to  launch an attack upon Iran’s nuclear facilities,” he noted.

“The events of 9/11 were artificially contrived by the CIA, the neocons in the Department of the Defense and Mossad to change US foreign policy from one in which – at least officially – ‘we’ve never attacked any nation that have not attacked us first’ to one in which we regain an aggressor nation [status], immediately launching attacks on Afghanistan,  subsequently on Iraq, then on Libya, ongoing efforts to undermine Syria, and one expects that Iran is in the offing in the background as the ultimate target,” said Fetzer, the co-founder of Scholars for 9/11 Truth.

US officials assert that the attacks were carried out by al-Qaeda terrorists but independent analysts say it was a false-flag operation carried out by US neoconservatives along with the Israeli intelligence agencies in order to accelerate the US war machine and advance the Zionist agenda.

“In addition, we have the neocons, where it must be remembered that most of these neocons are dual US-Israeli citizens,” Fetzer pointed out.

He went on to say that neoconservatives, such as Andrew Lack, are “conducting extraordinary disinformation campaign to even discredit Russia Today, which along with Press TV, maybe the most reliable truth-telling news outlets in the world today, suggesting that truth-tellers are terrorists.”

“The situation is very, very bad. We now have US military drills in Europe, that are angering the Russians, but where the US, Britain, France and Jordan have refused to name [ISIL] as a terrorist group,” the American scholar noted.

“In the background [of the] success of the BRICS [Brazil, Russia, India, China and South Africa] arrangement, the new alternatives to the International Monetary Fund and the World Bank, Russia is providing these air defense systems, China is going to develop a nuclear reactor for Iran,” he observed.

“There is a growing strength of relationship between Russia, Iran and China, which is a very positive development,” he underlined.

In his concluding remarks, Fetzer said, “The situation is very troubling. Paul Craig Roberts is quite valiant. He has done a wonderful work, and all of us have must pause and consider why there’s this fanatic effort to attack Putin and Russia, when they represent sane voices in a world of chaos today.”