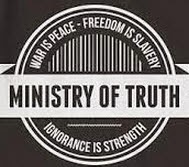 US Representative Ed Royce (R, CA) is busy at work destroying the possibility of truth being spoken in the US. On April 15 at a hearing before the House Committee on Foreign Affairs of which Royce is chairman, Royce made use of two minor presstitutes to help him redefine all who take exception to Washington’s lies as “threats” who belong to a deranged pro-Russian propaganda cult.

Truth is bubbling up through Washington’s propaganda. Confronted with the possibility of a loss of control over every explanation, Hillary Clinton, Ed Royce, and the rest are suddenly complaining that Washington is “losing the information war.” Huge sums of taxpayers’ hard earned money will now be used to combat the truth with lies.

What to do? How to suppress truth with lies in order to remain in control? The answer says Andrew Lack, Royce, et alia, is to redefine a truth-teller as a terrorist. Thus, the comparison of RT and “dissident” Internet bloggers to the Islamist State and the designated terror group, Boko Haram.

Royce expanded the definition of terrorist to include dissident bloggers, such as Chris Hedges, John Pilger, Glenn Greenwald and the rest of us, who object to the false reality that Washington creates in order to serve undeclared agendas. For example, if Washington wants to pour profits into the military/security complex in exchange for political campaign contributions, the politicians cannot say that. Instead, they claim to protect America from a dangerous enemy or from weapons of mass destruction by starting a war.

If politicians want to advance American financial or energy imperialism, they have to do so in the name of “bringing freedom and democracy.” If the politicians want to prevent the rise of other countries, such as Russia, President Obama has to depict Russia as a threat comparable to the Ebola virus and the Islamist State.

Noam Chomsky summed it up when he said that Washington regards any information that does not repeat Washington’s propaganda to be intolerable.

Washington’s assault on truth as a threat helps to make sense of the gigantic National SecurityAgency spy system exposed by William Binney and Edward Snowden. One of the purposes of the spy network is to identify all “dissidents” who challenge Big Brother’s “Truth.”

There is, or will be, a dossier on every “dissident” with all of the dissident’s emails, Internet searches, websites visited, phone calls, purchases, travels. The vast amount of information on each dissident can be combed for whatever can be taken out of context to make a case against him, if a case is even needed. Washington has already successfully asserted its power over the Constitution to indefinitely detain without charges and to torture and to murder US citizens.

It was a couple of years ago that Janet Napolitano, head of Homeland Security, said that the department’s focus had shifted from terrorists to domestic extremists.

Lumped into the category of domestic extremists are environmental activists, animal rights activists, anti-war activists which includes disillusioned war veterans, and people who believe in states’ rights, limited government and accountable government. Consequently, many dissidents, America’s best citizens, will qualify as domestic extremists on several accounts. Chris Hedges, for example, is an advocate for animals as well as concerned about the environment and Washington’s never-ending wars.

The spying and the coming crackdown on “dissidents” might also explain the $385 million federal contract awarded to a subsidiary of Dick Cheney’s firm, Halliburton, to build detention camps in the US. Few seem to be concerned with who the camps are to detain. There is no media or congressional investigation. It seems unlikely that the camps are for hurricane or forest fire evacuees. Concentration camps are usually for people regarded as unreliable. And as Lack, Royce, et alia have made clear, unreliable people are those who do not support Washington’s lies.

A perceived need by Washington, and the private power structure that Washington serves, to protect themselves from truth could also be the reason for the very strange military exercises in various of the states to infiltrate, occupy, and round-up “threats” among the civilian population. (see http://www.zerohedge.com/news/2015-04-16/signs-elites-are-feverishly-preparing-something-big )

Even the presstitute CNN reported that the National Guard troops sent to Ferguson, Missouri, were programmed to view the civilian protesters as “enemy forces” and “adversaries,” and we know that the state and local militarized police are trained to view US citizens as threats.

As far as I can discern, not many Americans, whether Democrat or Republican, liberal, conservative, or super-patriot, educated or not, understand that Washington with the cooperation of its presstitute media has defined truth as a threat. In Washington’s opinion, truth is a greater threat than Ebola, Russia, China, terrorism, and the Islamic State combined.

Does it satisfy you? Are you content that in your name and with taxes on your hard-earned and increasingly scarce earnings, Washington in the 21st century has murdered, maimed, and displaced millions of peoples in eight countries, has set America on the path to war with Russia and China, and has declared truth to be an enemy of the state?

Joachim Hagopian, Open Letter to All the Criminally Complicit Genocidal Killers of the World