Gordon Duff: Covering for JADE HELM and the Boston bombing

As a journalist and editor for Veterans Today, the Senior Editor of which is Gordon Duff, I was astonished when he trashed an article by another former Marine, Robert O’Dowd, by adding an “Editor’s Note” claiming that what O’Dowd had to say was uninformed, unsourced and misleading, since he (Gordon Duff) had “checked with his sources” and they all told him that JADE HELM was an innocuous “training op”.

After doing my own research, I published an article about it, “JADE HELM is NOT a ‘normal training drill'”, where I was not surprised that he added another “Editor’s Note”–this time twice as long and even more venomous–trashing my article, too. After it received 600 reads in the first hour (which hinted it would become #1), he took it down. The next day, he tossed me out of Veterans Today. 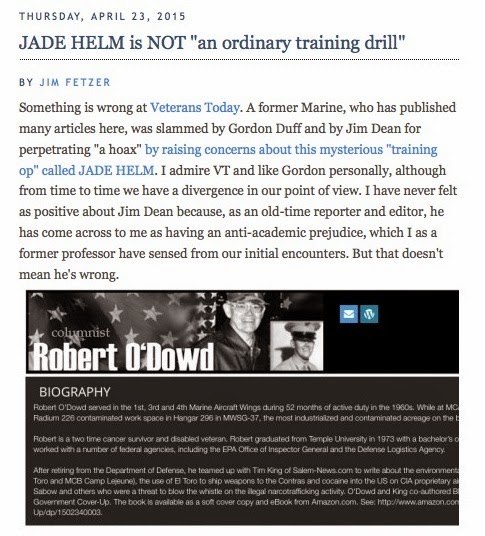 I have managed to recapture the article, which I have now republished at jamesfetzer.blogspot.com, which you can access here. Ask yourself why anyone in that position would have attacked this article, especially from a writer for VT who has published 150 articles on JFK, 9/11, Wellstone, Sandy Hook, the Boston bombing and Fukushima. Ask what could possibly be going on with Gordon Duff. Why would he have trashed this article?

I had noticed almost immediately that two of my other articles were missing, having “disappeared” over night after Gordon took me out of Veterans Today. One of them was on the Boston bombing, entitled “Faking the Boston bombing: How it was done”, which followed up on Nathan Folks’ observation that it had been done using (what is known as) “hyper-realistic” filming. So I embedded a sensational two-and-a-half hour program aired on “Caravan to Midnight”, which John B. Wells has regarded as important enough to make public as a YouTube:

I was therefore astonished to discover that not just one but my four most recent and important articles about the Boston bombing–not of which has anything remotely to do with JADE HELM–had also been “disappeared”. So I have written to John Allen, the General Manager of Veterans Today, the following email explaining that, if this is not a crime in itself, it at least appears to involved Veterans Today in covering up a crime, as follows:

Covering up the Boston bombing

Since I have now asked Gordon Duff a half-dozen times about “Faking the Boston bombing: How it was done”, and had no reply, I am convinced he is responsible, which means he is not only covering for JADE HELM but also for the Boston bombing. This man appears to me to embody corruption. The day before he sacked me from Veterans Today, by coincidence, I did a “False Flag Weekly News” about JADE HELM, which includes around 20 reference that anyone can verify for themselves:

And most recently–just this past Monday, 27 April 2015, “The Real Deal” was with Nathan Folks on the Boston bombing for the first segment and, for the second, on JADE HELM with my producer, Chance George, who has been following this extremely closely. As you may notice, the meeting held with a representative of the military in a small town in Texas, which Gordon Duff has been touting, instead raised more questions than it answered:

That the situation has come to this grieves me. I began writing for Veterans Today when Gordon invited me to join in 2011. I have believed in Gordon and thought he was a serious and professional journalist. I am dismayed at the turn of events, but reason and rationality require that, with the acquistion of new evidence and alternative hypotheses, we may have to reject hypotheses previously accepted, to accept hypotheses previously rejected and leave others in suspense. As the evidence I have presented explains, I no longer believe in Gordon Duff.

I was scheduled to appear with Jeff Rense on Friday to discuss JADE HELM. When I linked with the station, the producer explained that he was having trouble getting in touch with Jeff. I hung around for 45 minutes in the hope that he might make contact and, when I reluctantly concluded it wasn’t going to happen, I send an email saying that I hoped he was OK. The next morning I received a reply from his girlfriend, telling me that he had been in a serious autombile accident and giving me the number of the hospital treating him.

I called later that morning and was informed that he was resting comfortably in ICU. On Monday I learned that he was home with a broken wrist–and he called me that afternoon to invite me on his show (again) to talk about JADE HELM. He told me he had been hit with some kind of psychotronic weapon that rendered him complete unconscious and his car went off the road into a rather substantial ditch. It was totaled–actually, a complete wreck–and the police described it as “an unsruvivable accident”. It looks like no accident to me.

At the end of our conversation on the air, I observed that Stew Webb, with whom I had done a show about VT and Gordon Duff Thursday night, had been run off the road on Saturday, which further confirms my believe that things are getting hot because JADE HELM is “the real deal”. I wish I could deny it, but Gordon has boasted to me in the past that he could have people taken out with a few phone calls. I don’t like to entertain the idea, but if I am right about JADE HELM, then this may be the game that is being played for “all the marbles”.

10 thoughts on “Gordon Duff: Covering for JADE HELM and the Boston bombing”