Breaking News
666 Cases of Heart Disease in 12 to 17-Year-Olds After COVID Shots – Less than 2 Cases Per Year Following All Vaccines for Past 30+ Years
Ron Unz, RFK, Jr. and the Anti-Vaxxing Movement
And I Suppose … nobody died when Johnny Carson was buried at sea on the moon, either?
Dobbs v. Jackson Women’s Health Organization, No.19-1392 on the docket of the United States Supreme Court
FIVE FREEDOMS: The Fifth Circuit’s Temporary Injunction Halting OSHA’s Vaccine Mandate [EXPLAINED]
07 Dec, 2021
Skip to content
BILL SHELLEY’S SHRUNKEN HEAD:
An Open Letter to Jim Fetzer
by Richard Hooke
Jim, it occurs to me that if I cut out the odd ‘shrunken head’, from Black Hole Man’s upper chest, and attach it to the side of Obfuscated Man’s ‘Frankenstein looking’ head, then the resulting composite looks just like Bill Shelley.  I guess what prompted me to do that was the way Bill Shelley’s hairline comes down to a point in the center of his upper forehead (like Eddie Munster) and I knew Billy Lovelady’s hairline (Black Hole Man) was not like that.
Obfuscated Man’s head looks a lot like Bill Shelley; with its similar right eyebrow and square cranium, but it is missing the pointed hairline and left eye.  Well, when you join the two half-heads what you get is the completed head of Bill Shelley; and guess what? He has the lean build, the narrow dark tie, the white long sleeve dress shirt… So, I put together the following collage to express my thoughts (please read the caption) 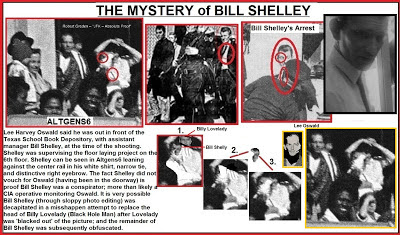 I ask you, what else could account for that odd shrunken head; dangling from the right upper chest of Black Hole Man?  It appears Billy Lovelady (Black Hole Man) had his head ‘blacked’ out and his chest ‘whited’ out; then Bill Shelley (Obfuscated Man) had a large portion of his head removed; obscuring Bill Shelley in the process, that was used to create a bogus replacement head for Black Hole Man (Lovelady).  Then a white blob-like right arm and small hand were created for Obfuscated Man, shading the eyes of his new bogus face that was sketched in front.
Obfuscated Man’s (Bill Shelley) arms were originally folded across his stomach; so his original right forearm had to be taken out, having been altered to shade his eyes.  Bill Shelley’s entire right forearm, in a white dress shirt originally, was colored flesh tone, in a ridiculous attempt to make it look like an elongated left wrist, widening at its extremity; that is anatomically incorrect and obviously was a white shirted forearm to begin with (originally).  The Smiling Black Lady’s hair was extended up to cover Bill Shelley’s original right bicep.
All of this was done very crudely, in a hurried manor, with primitive technology.  The shrunken replacement head, for Black Hole Man, was hung much too low, from his upper chest, and appears comical.  Obfuscated Man’s head was not fully obfuscated; his right eyebrow and lid, those of Bill Shelley, remain visible 49 years after the fact, and his altered straight hairline looks like Frankenstein. 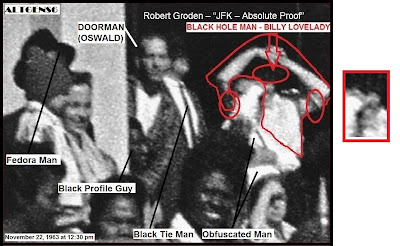 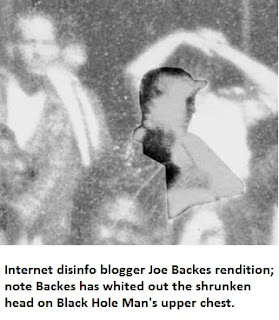 Robin Unger, photo expert for the JFK Assassination Forum, continues to promote the bogus explanation that Obfuscated Man is shielding his eyes and looking forward; as evidenced by his colorization of Algens6 posted in the JFK Assassination Library.  Unger has yellowed out the shrunken head; refusing to acknowledge its existence.  My self and Dr. Ralph Cinque, were banned from the JFK Assassination Forum, late in 2012, by site owner Duncan MacRae.
We had merely been expressing our opinion, with a mixture of narrative and photographic collages, that Lee Harvey Oswald was in the Texas School Book Depository doorway, on 11/22/63 at 12:30 pm, and thus could not have killed President Kennedy.
Hundreds of pages of our discussion, energetic argument, and cutting-edge JFK Research, were all deleted by Duncan MacRae.  In one exchange with Robin Unger, I asked Unger why he had colored the shrunken head (on Black Hole man’s chest) yellow, expanded Obfuscated Man’s right hand to the size of a catcher’s mitt, and cut down the absurd proportion of his bogus left forearm:

Unger obviously is attempting to obfuscate Black Hole Man’s original crude bogus replacement head, expand Obfuscated Man’s false right hand (further obfuscating Bill Shelley’s head in the process), and fine tune Obfuscated Man’s original crude, anatomically incorrect, left forearm.
To which Unger simply responded, ‘What shrunken head?’, like there is nothing there.  Well, there is something there, and, I think it very well may be the remains of Bill Shelley’s head; and it should not be colored yellow by Robin Unger, unless he is trying to perpetuate the Big Lie 49 years after the fact; to steer the American public away from the fact that Bill Shelley was crudely obfuscated out of the Altgens6 photo because Lee Oswald told Captain Fritz he was ‘out with Bill Shelley in front’.  As I recall, my final argument on The JFK Assassination Forum was with Rob Caprio.  I argued for my rightful freedom of speech, Caprio said I should learn my place, and my work was promptly vaporized by Duncan MacRae.
Additional Fraudulent Interpretation by “Steve” at VT 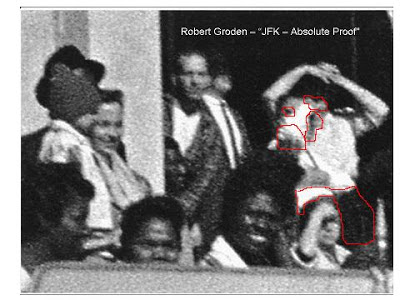 1 Right Hand
2 Right Spec ‘Temple’
3 Front face right half-profile
4 Right Elbow
5 Bulging Belly (visible part – maybe partly due to leaning back as noted, but obviously not a slender guy nevertheless)
The apparently greying hair is above and to the right of the Spec Temple, going towards the hand.
Additional Observations
I believe that’s the curved top of Bill Shelley’s right shoulder (below left).  Actually, the photo (from Ralph Cinque’s photo shoot (below right)) is what tipped me off on that.  When your arm goes up, your shoulder becomes an extension of your upper arm and the rounded top of your deltoid goes away; would no longer be showing; if his arm was really up shielding his eyes, but it’s not, it’s a fraudulent depiction (below left).
Original (Altgens6) Obfuscated Man
and Ralph Cinque’s re-enactment 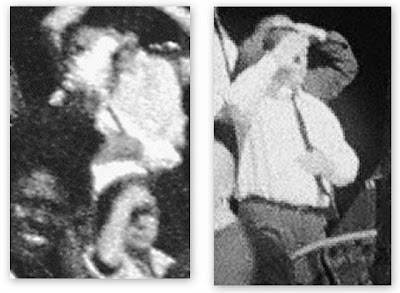 In addition, the smiling black Lady’s hair was extended up to cover Bill Shelley’s right bicep and elbow; also…look at the darkish, intermediate, area above the black Lady’s hair and Shelley’s right elbow…it is covering Bill Shelley’s upper right pectoral area.
The Alteration Time-Line
In 2007, Jim Fetzer noticed the recently released notes of Dallas Police Captain Will Fritz’s interrogation of Lee Oswald on 11/22/63 said Oswald told Fritz he was ‘out with Bill Shelley in front’ at the time of the shooting.  The notes give the interrogation time as being from 3:15 pm to 4:15 pm.  It has been established that there was approximately a 3 hour time window when the Altgens6 photo was held up, in New York, before being released to the world for the evening papers.
British JFK researcher Paul Rigby maintains that the Altgens6 photo (there were 7 altogether) was handled differently than the other 6. There was a delay in the release of Altgens6 because it was first wired to AP headquarters in New York, where it was “cropped twice.” Rigby maintains that there was roughly a two to three hour window of opportunity for them to alter it. His exact words were: “I don’t wish to exaggerate the window of opportunity for alteration. It was, at most, I hazard a guess, two to three hours. But, a window of opportunity there does appear to have existed.”

“On the basis of the available evidence, we can, provisionally at least, conclude the following:

1) Altgens did not develop his own photos;
2) Altgens6 went by fax, not to the world at large, but to the AP New York HQ, at just after 1:00 PM CST;
3) the negatives were sent by commercial airline, ostensibly to the same destination but did not arrive until hours after the initial fax;
4) the dissemination of the image from NY did not occur until at least 2 hours after the fax arrived but before the arrival of the negatives;
5) Both the AP and Altgens appear to have sought to conceal this hiatus;
6) AP acted against its own commercial interest in delaying release of Altgens6;
7) the version which first appeared in the final editions of newspapers in Canada and the US on the evening of November 22 was heavily, and very obviously, retouched;
8) point 7) may not be the explanation, either full or partial, for the concealed delay; it is quite conceivable that obvious alterations were used to draw attention away from other more subtle stuff.”
A Likely Scenario
I am imagining a scenario where Lee Oswald, during his Friday afternoon interrogation (11/22/63), told Captain Fritz he was out front with Bill Shelley.  Immediately a call was placed to the FBI photo lab in New York and a photo tech was told to take Oswald and Shelley out of the Altgens6 photo. They wanted to release Altgens6 because it showed the TSBD building and JFK being shot, in the same frame, thus establishing the shots came from the rear; but of course the patsy could not be in the TSBD 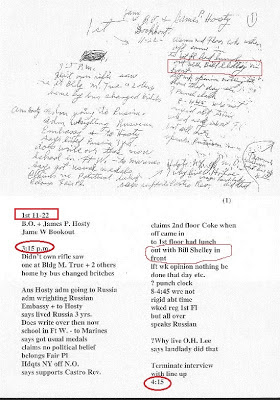 if he was up on the 6th floor shooting the President.  And any possible witness collaboration could not be tolerated either so Bill Shelley had to be taken out of the photo.  Lee Oswald looked more like Billy Lovelady than anyone else in the doorway; so Lovelady (Black Hole Man) was blacked out, Bill Shelley (Obfuscated Man) was obfuscated, and Oswald (Doorman) was altered to look like Billy Lovelady.
The job was sloppy: Lovelady was not completely blacked out, nor was Shelley completely obfuscated, and a large part of Shelley’s severed head was left dangling over the remains of Lovelady’s upper chest, and, of course, Doorman was not altered nearly enough because now, in 2012, the Oswald Innocence Campaign has established 50 Points of ID between Oswald at the Dallas Police station, later that day, and ‘The Man In The Doorway’, who was Lee Harvey Oswald, an innocent man gravely wronged by his own country: The United States of America.
Richard M. Hooke, a student of anthropology at UC Santa Barbara and former computer systems analyst for Bank of America, is also a writer and researcher regarding the death of President John F. Kennedy.
Please follow and like us:

And I Suppose … nobody died when Johnny Carson was buried at sea on the moon, either?