We have a dream … 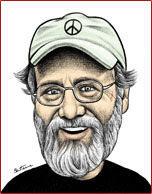 … of bringing the United States politicians, journalists and generals who have brought about this long ten-year war and debacle to trial — and put on TV just like O.J. — every goddamned afternoon — so every American can watch … just like the McCarthy Hearings and the JFK funeral procession …

What we need is a New American Dream.

Not of new homes and toasters and microwaves, but of becoming the type of country we always thought we were.

And part of that is becoming the quality of people who are capable of telling the truth.

Right now we live on lies. We subsist on lies, but it’s not really living.

We lie to ourselves about how we deserve this country and we deserve to shut others out after we took the land from others.

We lie to ourselves and our children about all aspects of our history.

The New American Dream means never having to say some question or idea is not valid. We are allowed to ask any questions that we have … there are no wrong questions. There is no hidden black military budget, there are no UFO files Americans cannot see, no JFK documents that will not be opened during our lifetimes, no destroyed RFK murder photos by the L.A. police, no evidence from Ground Zero taken away before we can even look at it — we are not the Soviet Union of the 1960s — this is supposed to be America. That is our dream, to become America, The New America, the real hope of the world.

I believe that 911 was an inside job.

What we need in America is a Truth Commission like they had in South Africa to heal their broken country.

Our country is surely broken as well.

We need a Truth Commission. We need to put certain people on the stand and we need to be allowed to ask questions.

We are not even allowed to ask questions.

Those who are supposed to ask questions for us refuse to do so. Can you honestly say that Brian Williams or Matt Lauer or Katie Couric or Amy Goodman or Jon Stewart or The New York Times or the Minneapolis Star-Tribune asks the questions that need to be asked?
….

It is rather based on those in power being focused like a laser beam not on truth and social justice and doing the right thing – which is why we voted for them – but rather on doing whatever it takes for them to remain in power.

It is based rather on the shooting of Jack Kennedy from perhaps as many as six vantages in Dealey Plaza. That is the Big Boom – the Big Boom theory of the creation of this country.

Before that instant we had a chance to fight poverty and racism and war, get the truth, the truth about whatever, because before that moment everything seemed bright and possible, even probable.

But after that Big Boom, the dustbowl clouds of power and greed and violence came out and blotted the sun.

The United States of America is not based in the Constitution or the teachings of Jesus as we proclaim that it is.

It is based on the collaboration of the U.S. Army, FBI, CIA and Memphis police to murder Martin Luther King. It is also based on the shooting of Robert Kennedy from behind his ear, rather than from the front where Sirhan Sirhan was standing.

We do not make cars anymore in America but we do psy-ops like the Greeks and Romans did philosophy, astronomy and speeches and literature.

These Great Misdeeds are where we honed our master craft, where those who rule founded this country, where our gears, our tool and die were cast.

The Lorraine Motel in Memphis is our true Plymouth Rock.

The Ambassador Hotel pantry is our actual Grand Canyon.

Waco is our Arlington Cemetery.

Oklahoma City is our Yellowstone Park.

The woods near Eveleth, Minnesota where Paul Wellstone’s plane went down is our National Mall.

And with the confidence and experience gained in the 1960s our actual Founding Fathers, whoever they are, were able to tack on a Bill of Rights to their version of the Constitution on Sept. 11, 2001. …

… We have fake history.

Our junior high and high school history books should be in italics — handed out by the teacher on the first day with a wink – Remember the Maine – Pearl Harbor – Gulf of Tonkin – Waco – Oklahoma City bombing – Waco – moon landings – stolen elections.

Because we accepted the Warren Commission we got the “911 What Controlled Demolition Commission” and our children will get the “XYZ Non-Investigation by Rich People Covering Up For Other Rich People.”

I believe 9-11 was an inside job —– they got the new Pearl Harbor they wanted to invade Iraq and take the oil.

The troops are not protecting us. That is someone’s spin on the day’s news – somebody’s advertising slogan — someone else’s sermon.

The troops serve the empire. They are not heroes. They kill and plunder for the empire. The heroes in our country are the protesters, the ones who go face to face with the empire, those who will begin to gather in Washington, D.C. on Oct. 6.
…….

… the Obama election, believing in Hope – I had hope. I had hope that we might enter a brand-new period of openness, no wrong questions, Truth – becoming the type of people, nation that we always thought we were.

It didn’t happen. And we have to ask ourselves why?

It’s one of those questions that we are allowed to ask—that we should ask.

You have to know that Barack Obama knows the whole truth about the 9/11 attacks. He is complicit. He has lied. He has continued the wars in Iraq and Afghanistan based on a lie. And he knows he is lying.

… Can you believe the Warren Commission? I mean believe that it really happened, and we did not have riots because of it, but rather we just say, oh, well … and so … Bush fought the 9/11 commission. He did not want to testify alone … was the commission meeting in the dark, with spiders? … after 9/11 all the propaganda to promote the war – terror alerts – where did those go? Osama Bin Laden tapes in the middle of the afternoon on Fox and CNN and NBC … 9/11 Commission – finally, and then what a supreme joke that was and we settled for it. Building 7 – controlled demolition – where’s the plane in the Pentagon – Shanksville – dancing Israelis? … and still the Bushes ride in a golf cart down the third baseline waving to the crowd and are greeted by cheers rather than tomatoes, fists and handcuffs … Karl Rove, Donald Rumsfeld, Dick Cheney walk free … Condoleeza Rice teaches at Stanford — rather than being locked up forever in one of these high-tech concentration camps we have, like in Florence, Colorado, and shuffling off to the shower each morning wearing ankle shackles and a waist chain and fluorescent orange pajamas … for the rest of their lives. If we’re going to have these insane places, we might as well put the worst of the worst there, and that would be George and George Bush, Dick Cheney, Karl Rove, Condoleeza Rice, Donald Rumsfeld and whatever other dozens have conspired, continue to conspire, to overthrow this country – who know the truth and don’t tell the rest of us: FBI director Moeller, General Tommy Franks and all the other generals who acted as commentators on NPR and Fox, ensuring us that the coming war was so cool, so good, so right …, and now we have how many hundreds of thousands of dead human beings in Iraq and Afghanistan. Just people who were living their lives and found themselves in the way of the American quest for gold, for dominance. And the thousands of young Americans who have died or had their lives ruined because of a lie, a huge, amazing lie, perpetrated by men and women we asked in good faith to lead us on our way.

Wolfowitz, Aschcroft, Pearl, O’Reilly, Hannity, Couric, Lauer, Williams, Rather, Jennings, Brokaw, Limbaugh, Blitzer, Sawyer, Rivera — all those names, who, if history ever rights itself, will be synonymous with Goebbels, Goering, Himmler. …

Back when I was a kid growing up in Nebraska, we thought Lyndon Johnson was just a big, boring dude. — Well, we all need to read LBJ: The Mastermind of JFK’s Assassination by Phillip F. Nelson. — It turns out that the vice-president of the United States planned and carried through the murder of John F. Kennedy. Never in one hundred years would my hometown newspaper, radio station, teachers, coaches, or parents have let us even consider such a thing.

The term “grassy knoll” was said with the same sneer that “liberal” gets today — and even today, almost fifty years later – that seems like a bold statement. …All the while we pointed fingers at the Soviet Union, declaring them a closed society and pointing back at ourselves, boasting forever of a free and open society … we are anything but, have been anything but. The ones who ruled the Soviet Union, well, they had nothing on the ones who rule us.

Yes, these successful lies are …

More profound than anything else in World History … ever.

It’s just all so very well done. It’s who we are.

And so the most profound, big thing about this big thing called America is that it is a highly successful lie.

… and you can say that’s conspiracy tinfoil, to think like that, about the Bushes and the assassinations and such, but I say it’s just paying attention.

Remember the Anthrax letters, which said “Are You Afraid?” Those were not written with a rock and chisel like Fred Flintstone from the recesses of some cave in Afghanistan. Those letters came from persons within our own government.

Like a horror movie and the killer is in the same house with us.

These killers are right here, with us and “they” want us to be afraid.

“We cannot be afraid.”

“… the great city sprawls with people, some smartly dressed, many of them shabby, a few beautiful but most not, all reduced by the towering structures around them to the size of insects, but scuttling, hurrying, intent in the milky morning sun upon some plan or scheme or hope they are hugging to themselves, their reason for living another day, each one of them impaled live upon the pin of consciousness, fixed upon self-advancement and self-preservation. That, and only that. — John Updike, “The Terrorist”

[… forced with having to find a reason for living another day, impaled live upon the pin of consciousness … to become fixed upon self-advancement and self-preservation]

But the human condition also means knowing when there is something wrong, something not quite right and having the spirit to refuse to live like that, to live within a lie.

That’s why so many people have worked for so long, for ten years, against all sorts of obstacles, to find the truth, to make this the country and we the people who can truly make this country great.

People like Kevin Barrett and Jim Fetzer, who have been working almost non-stop for years and years to give us that New American Dream.

They are not afraid.

We take courage from their example.

We also cannot be afraid.

Will on SWISS RESEARCH REPORT: Facts about COVID-19

Will on William de Berg, Why the U.S. “Color” Revolution Failed—The Wrong Color?

The truth is winning on Dr. Eowyn, African-American professor finds more than 2 in 3 hate crimes are fake