Nanothermite: If It Doesn’t Fit, You Must Acquit! 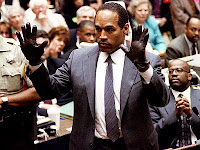 Those who remember the 1995 O.J. Simpson trial will recall the gloves that turned out to be “too small” for O.J.’s hands when the long-awaited day of trying them on in the courtroom finally arrived. The blood-soaked gloves (one found at the crime scene and the other outside O.J.’s house in Brentwood the morning after his former wife was murdered) were gloated over as “hard evidence” by the prosecution and the media, very comparable to how the discovery of unignited nanothermite chips in the WTC dust is considered to be “hard evidence” of the explosive demolition of the Twin Towers on September 11th, 2001.

Although some have expressed skepticism about what is often called the “smoking gun” of 9/11, the great majority of 9/11 Truthers have accepted – and many have celebrated – this discovery, confident that it will lead to “a new, independent investigation” of the event and bring the perpetrators to justice. But precisely how did the resulting “nanothermite theory” of destruction of the Twin Towers come about – and how well does it stand up to critical scrutiny?

Observations by first responders of apparent molten metal – thought to be molten iron – could be explained by thermite reactions, which, in turn, could possibly explain the severing of steel columns through a process of melting. However, the explosive effects observed in the destruction call for some further explanation. Nanothermite has been identified as a candidate, being faster-reacting and alleged to be “an explosive form” of thermite.

In a paper titled “Why Indeed Did the WTC Buildings Completely Collapse?” (2006), physicist Dr. Steven E. Jones cited thermite to explain the molten metal and first started raising the possibility that nanothermite could explain the additional explosive effects observed. Then four dust samples collected in the aftermath of the towers’ collapse by different individuals were sent to Dr. Jones, and upon testing, they were found to contain unreacted red chips of a nanothermitic material.

Those results were reported in a later paper titled “Active Thermitic Material Discovered in the Dust from the 9/11 World Trade Center Catastrophe” by Niels Harrit, et al. (April, 2009), and because of this many assumed that nanothermite had been definitively identified as the prime candidate destructive agent. The paper, said to have been peer-reviewed, came out in the Open Chemical Physics Journal (Bentham Science Publishers), causing 9/11 Truthers to run with the news that explosive nanothermite blew up the Twin Towers, proclaiming what soon became a form of gospel in the 9/11 community. The Gospel of Nanothermite has given the incendiary properties of thermite a set of new miraculous powers: in its nano-state it becomes “Super Thermite” – a high-explosive that pulverized hundreds of thousands of tons of building materials in no more than 10 seconds.

A scientific person, or one who prefers to use logic, might wonder about such claims and proceed by examining the scientific literature on nanothermite as well as the principle of how explosives achieve destructive force through generating shock waves that produce fragmentation. This might be a good time to note that the Rock Creek Free Press made a very important point in its May 2009 article on nanothermite: “To be a high explosive, the reaction speed must exceed the speed of sound in the material, which is unlikely in the case of thermitic materials, but nano-thermitic material may act as a low explosive in a manner similar to gunpowder.” 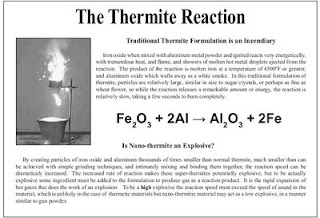 Few who have carefully watched video footage of the Twin Towers coming down could fail to notice what might appropriately be called “explosive effects” in the nature of the destruction. The question then would be: Were conventional explosives or some other kind of destructive energy source employed? If nanothermite is indeed a high explosive, then was it also necessary to use conventional explosives to achieve the demolition of the towers? The more sophisticated believer might agree that conventional explosives also could have been employed, but for the scientifically less sophisticated 9/11 Truther, the “Thermite/Nanothermite Gospel” says it all – and has been “conclusively proven” by the nine authors of the 2009 published and peer-reviewed paper.

But what does other peer-reviewed scientific literature actually have to say about nanothermite? “Nanoscale Aluminum-Metal Oxide (Thermite) Reactions for Application in Energetic Materials,” Central European Journal of Energetic Materials (2010), authored by Davin G. Piercey and Thomas M. Klapötke,

Let’s examine the reason for that important last statement. The “destructive fragmentation effect” of an explosive is its detonation velocity, or the speed of the shock wave through the substance it is traveling in. To significantly fragment a substance, the detonation velocity of the explosive must equal or exceed the sonic velocity (the speed of sound) in the material. For example, the speed of sound in concrete is 3,200 m/s. In steel, the speed of sound is 6,100 m/s. Conventional high explosives such as TNT and RDX have detonation velocities of 6,900 and 8,750 m/s respectively, and are therefore capable of fragmenting concrete and steel, because both 6,900 and 8,750 exceed the sonic velocities of 3,200 m/s required to shatter concrete and 6,100 m/s required to shatter steel. As Dwain Deets has diagrammed, at only 895 m/s, iron-oxide/aluminum nanothermite does not come close to TNT and RDX. 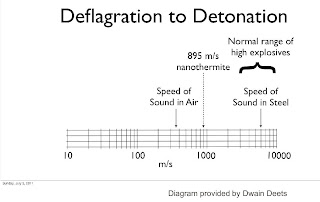 However, prominent 9/11 researchers have

nonetheless termed nanothermite to be a powerful explosive. The very highly respected David Ray Griffin, Ph.D. calls nanothermite a “high explosive” in his July 6, 2010 article entitled “Left-Leaning Despisers of the 9/11 Truth Movement: Do You Really Believe in Miracles?”, which was published in the online journal, Global Research. “High explosives, such as RDX or nanothermite,” wrote Griffin, “could explain these horizontal ejections.”

Architects and Engineers for 9/11 Truth, the most revered of 9/11 research groups, published a piece called “Exotic High Tech Explosives Positively Identified in World Trade Center Dust” on April 5, 2009. In this they stated, “Ordinary thermite burns quickly and can melt through steel, but it is not explosive. Nanothermite, however, can be formulated as a high explosive.”

While searching the open scientific literature on nanothermite and establishing the low detonation velocity of its iron-oxide/aluminum variety, chemical engineer T. Mark Hightower has been in contact and shared his findings with Dr. Steven Jones and the authors of the highly regarded April 2009 nanothermite paper, as well as with several other well-known 9/11 Truth leaders. The most recent responses to his challenges fall into two general categories. One response is that the combustion velocity of 895 m/s is enough to explain the Twin Towers’ destruction. The other is the rather persistent claim that nanothermite can indeed be a high explosive, where this formulation is a military secret that is not discussed in the open literature.

Alright. It is true that military explosives’ research employs nanotechnology and that applications involving nanothermite are a subset of this research. (The military even connects nanotechnology with mini-nukes, stating that a mini-nuke device the size of a suitcase could destroy an entire building.) But to suggest that the American military has a “secret recipe” that converts iron-oxide/aluminum nanothermite into a high explosive when this claim is contradicted by the open literature doesn’t make any sense.

Hightower has further calculated that if conventional explosives (such as TNT or RDX) acting alone were used to bring down the Twin Towers, the quantity necessary would have been hundreds of tons of explosives per tower. On July 27, 2011, Niels Harrit 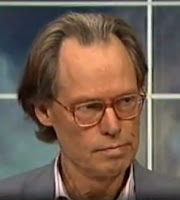 (chief author of the 2009 nanothermite paper)presented a calculation for how much thermitic material would have been necessary to explain the presence of the many tiny iron-rich spheres in the dust (assuming that a thermite reaction was the source of the spheres).

He gave a range of numbers, based on lower and higher concentrations of the thermite formulation. His lowest figure amounted to 29,000 metric tons of thermitic explosive per tower – a value hundreds of times greater than the calculation for conventional explosives. His “conservative” estimate (based on 10% iron-oxide in the thermitic material) was 143,000 metric tons of thermitic material that would have been placed in each tower. But let’s be realistic: How could the perpetrators drag in and plant over 100,000 tons of explosive without being seen? Even 29,000 tons is hard to imagine and would have been rather difficult to put in place unnoticed.

A side note from the many technical papers on nanothermite studied by Hightower: nanothermite produces a blinding flash of light when it goes off. If such immense quantities of nanothermite were used to blow up the Twin Towers, then why didn’t we see tremendous bursts of blinding light all over two those buildings as they were destroyed and largely converted into millions of cubic yards of very fine dust? 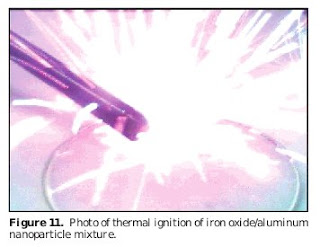 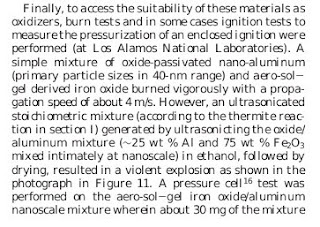 The Dangers of a False Theory

Architects & Engineers for 9/11 Truth, which is led by Richard Gage, has been ceaselessly promoting the nanothermite discovery as the “smoking gun” of 9/11, and calling the substance a “high explosive”. If there is ever a

proper investigation and a lawsuit is filed in a court of law on the “strength” of nanothermite as “hard evidence” of controlled demolition by explosives at the World Trade Center and it is revealed to the court by the opposing side that nanothermite is at best a very weak “explosive” and could not possibly have destroyed the Twin Towers in seconds, the entire case would almost certainly be dismissed and a legal precedent set against future efforts by others.

The danger of promoting a false theory or of overselling a weak hypothesis to millions of people is that it may someday be a convenient way to close the book on the entire issue. That 9/11 nanothermite advocates insist on their position in the face of significant refutations is disturbing. They are clearly unwilling to change their minds or even to discuss facts that expose weaknesses in their statements. What do these refusals really mean? Are some leaders deliberately pushing a flimsy theory with the intent that it will ultimately be shot down? Or is nanothermite a red herring or limited hangout to keep us from looking into what was really used?

The 9/11 Truth community can be confident in its refutations of the official account of 9/11 without having to present a “bullet-proof” alternate theory. It may well be that thermite/thermate/nanothermite was used in its familiar role as an incendiary (or “cutter charge”) in destroying the Twin Towers. But that is very different than to claim that it is a “high explosive” that could have destroyed those buildings. The 9/11 Truth movement must not commit itself to a feeble alternative, especially when an honest assessment of the empirical data for that theory does not support its applicability and actually refutes it.

T. Mark Hightower is a chemical engineer with more than two decades of experience in the industry, who currently works for NASA. His views are an exercise of his freedom of speech and in no way represent the positions of his employer.

7 thoughts on “Nanothermite: If It Doesn’t Fit, You Must Acquit!”