Breaking News
Bob Zeidman, A Quiet Attack on American Principles Is Going Unnoticed
Paul Craig Roberts, The Boston Marathon Bombing 8.5 Years Later
We can’t sit this out: we’re dealing with a ‘criminal conspiracy’ to usher in global socialism
US Treasury deputy sec warns unvaxxed Americans that shortages will continue until EVERYONE is jabbed
Paul Craig Roberts, America: A Dead Man Walking
22 Oct, 2021
Skip to content
GORDON DUFF: WHEN WILL THE CRIMES OF 9/11 END?
October 16, 2010 posted by Gordon Duff

DISINFORMATION, SPYING, INTIMIDATION, THE BIGGEST COVER-UP IN AMERICAN HISTORY
By Gordon Duff STAFF WRITER/Senior Editor
9 years after 9/11, American drug production in Afghanistan has gone from zero to 92% of world output.  Calling the drug business there anything but “American” is a lie.  We don’t just “turn way,” we are in it up to our necks, maybe deeper.  Last week we learned that USAID, part of the Department of State, was supplying fertilizer for opium production.  Testimony that implicates every level of the American government in drug dealing, corruption and even complicity in terrorism has been ignored or suppressed for years.  The American government, in concert with the powerful Israel lobby, is working to silence citizen dissent, suppress “open source” information and control, not just the media but every form of human communication beyond the guarded whisper.

No police state in history is guilty of more.
In particular, I recently read the most recent additions to Dimitri  Khalezov’s book on 9/11.  Khalezov was a Russian “special weapons” officer.  This led his examination to look at applications of advanced technologies tied to the application of particle physics, fission and fusion weapons and “Star Wars” technology which he has a unique understanding of.  What was enjoyable was his non-dogmatic approach.  There are so many theories around regarding 9/11, with government paid “shills” coming up with a new and crazier version almost weekly.  For every pronouncement about Al Qaeda and hijackers the government makes overtly, they make ten pronouncements about space aliens and cosmic death rays on the internet.
We know they do it, they have been caught repeatedly.  These are the actions of a police state.
I am not ready to comprehensively discuss all the reasons that 9/11 is such a disgusting subject.  Suffice it to say that the naked lies the government has foisted on the public for so long are both irrational and patently insane.  This is where Khalezov shines.  He has a way of cutting through the manure. 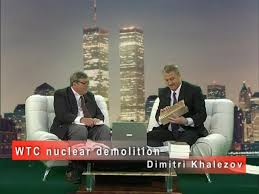 It is funny to read a Russian discuss 9/11.  One area that we can deal with today and, perhaps, put one minor thing to rest is how the World Trade Center was built and why an aircraft, why 500 aircraft could never hurt it.  Oh, you say, the plane flew right through the building, passing through the thin glass windows and out the other side.

Yup, that’s how it seemed.
How Khalezov describes the outer walls of the WTC is though comparison with a World War II T-34 Russian Tank.  His point is that each of the beams that made up the outside of the building, spaced 3 feet apart, had four sides, each not only harder but thicker than the armor on a tank.  The analogies used by Khalezov were compelling.
His first point, of course, is that anti-tank rounds are never made of aluminum.  You don’t use aluminum knives.
Aluminum can’t cut steel.
We could go further:  Crashing a Boeing 767 into 20 massive 4 sided hardened steel girders, highly supported and interlaced, cutting through them and eventually bringing down the largest building in the world would be the equivalent of throwing a beer can at a garbage truck.
Want more?  Cutting a steel knife with a piece of cheese?
Derailing a freight train with a thrown marshmallow?  OK, that one is a bit much, but you get the picture.  Aircraft are made of lightweight and very thin aluminum.  The WTC had a massive outer wall of heavy steel, thick enough to armor a tank, a similar center structure around the core and a second wall for a plane to pass through.  No possible amount of aluminum in any shape or configuration at 400 miles per hour or 2000 miles per hour could pass through one steel beam much less dozens.
Pages are spent describing this point nobody has discussed other than Khalezov.  It is clear that Khalezov and David Ray Griffin don’t see “eye to eye” on the methods used to bring the building down.  In many ways, it is a shame that there is a more powerful need to deal with the science before we deal with the criminal intent, especially finding those responsible.  I respect both men for the work they have done and their disagreement is an honest one.  That both manage to disagree with each other and still humiliate the government’s fabrication is both curious and compelling.
On this point all are in agreement.  Khalezov is emphatic that the wildest possible conspiracy theory involves box cutters, hijackers and  a massive building “pancaking” to the ground in total free fall while enough steel to build a naval fleet turns into dust. No idiot could believe that, a “hare brained” lie that has proven to be assembled from planted witnesses, misquotes and total fabrications.
If even one of these things were a factor, it would be evidence of a criminal conspiracy.  That all are present, that and the massive government spy operation directed against those seeking the truth, an operation that takes up an entire department header by Cass Sonnenstein, with a title that unavoidably sounds like “Reichs Minister of Propaganda,” we can say “case closed.”  We can also say with some certainty, “No Muslims were harmed in the making of this picture.”
I don’t plan on going there but something haunts me.  Nobody has seen or heard from Osama bin Laden since 2001.  Benazir Bhutto says he was killed then.  Intelligence officials from several countries confirm this privately.  Yet we have a hundred thousand people looking for him, nearly 5,000 have died hunting him after his death was confirmed, as reliable sources tell us.
On the other hand, the “suicide hijackers” we claim were on the planes on 9/11 seem to be, not only alive, but are thinking of suing the networks for being refused entry into the country to go on talk shows.  How can we have dead hijackers kept out of the country because they are on terrorist watch lists?  Doesn’t that stop when you die?
What kind of place are we running here?
But, we are here to talk dissolving steel, magically plummeting buildings and government misconduct.  When the NIST stated that the WTC “pancaked” they misrepresented the amount of concrete in the upper stories.  There was nothing to collapse, only vertical steel, no huge concrete walls, no pillars made of concrete and only thin concrete floors.  They lied.
Almost all the concrete in the buildings is in the foundation, there is little in the upper floors.  They are steel.  It would be like dissolving several aircraft carriers and seeing them blow away with the wind, except this is exactly what we saw.  However, we have seen one other steel building, the Windsor Building, in Madrid, burn for 24 hours.  This building was nowhere as strong and burned, not one hour but for at least a day.

The “government’ runs a website at www.america.gov meant to “debunk” 9/11.  They refer to an article from Popular Science and a study done by the National Institute of Standards.  Few scientists will stand by any of this anymore, they are all either onboard with “9/11 Truth” or protecting their careers with silence.
When we talk about steel no plane could ever penetrate, the NIST does supply a nice photo, though.

My recommendation is to read the book, not because I agree with it or everything it says.  Simply read it because it provides many relevant points, and some clear warnings about how serious government interference has been in the process of finding the truth.
Every lie, every infiltrated group, every bit of ridiculous pseudo-science proves one thing.
9/11 was an inside job and those responsible are still pulling the strings in America.
——————————–
About Gordon Duff: Gordon Duff is a Marine Vietnam veteran, and Senior Editor at Veterans Today. His career has included extensive experience in international banking along with such diverse areas as consulting on counter insurgency, defense technologies or acting as diplomatic officer of UN humanitarian groups. Gordon Duff’s articles are published around the world and translated into a number of languages. He is regularly on TV and radio, a popular and sometimes controversial guest.