James Petras talks with Hesham Tillawi about Lebanon
and 9 11

James Petras’ powerful 2006 book titled, ‘The Power of Israel in the United States‘ explained the enormous pro-Israeli Jewish Lobby influence on US Middle East policies. Often harming American interests, they’re pursued anyway because of its grassroots and high-level control over government, the business community, academia, the clergy and mass media since at least the 1960s.

Intolerant of opposing views, they’re suppressed for its own agenda, funded by PR propaganda domestically and overseas, America’s top publications paid off to go along, now revealed by a secret document subpoenaed by the Senate Foreign Relations Committee (FRC) investigation into the American Zionist Council (AZC), AIPAC’s parent lobbying arm.

"Between 1962 – 1963, the FRC subpoenaed" AZC’s internal documents, examining their activities as "registered agents of foreign principals," learning that over $5 million in tax exempt (and perhaps overseas funds) "had been laundered through the Jewish Agency’s American Section into the (AZC)."

The Agency is a quasi-Israeli government branch, funded to review legislation ahead of its submission to the Knesset under its Covenant Agreement – in violation of IRS regulations regarding tax exempt charitable funds and the 1938 Foreign Agents Registration Act.

Thanks to the Lobby, Israel is perceived as a trusted
friend and ally.

No matter. Israel got a pass to act illegally for nearly 50 years, doing it today more aggregiously than ever. In 1962, after being ordered to register as a foreign agent, AZC transferred its responsibilities to AIPAC, "which refuses to register as (an Israeli) foreign agent" and gets away with it.

In November/December 1960, news and editorial content covered Israel’s new nuclear reactor (for peace, not bombs they said), Arab refugees when the General Assembly was discussing them, the Eichmann case, Israel’s aid to African states, and seating the UAR in the Security Council, reports presenting one-sided, pro-Israeli propaganda.

"It can be said that the press of the nation, during 1960, has by and large shown sympathy and understanding of Israel’s position." Arab views have been largely "counteracted."

"The US contingent of 60 Mayors returned from Israel where they attended (an earlier) Conference….While (there), a number of them were interviewed by (US reporters) who sent (pro-Israeli) stories back to their hometown papers; they were also recorded in interviews for local radio stations."

Other plans were made to have those attending meet with Jewish and Christian audiences to disseminate friendly Israeli commentaries. In addition, opinion makers are invited to Israel at government expense, paid off to report friendly stories. An Israeli student got a scholarship "to transfer to the Monterey Peninsula College where propaganda carried on by three Arab professors has been most hurtful."

Other schools were infiltrated the same way. Further, "We continue to cultivate (pay off) faculty people in many areas and are making progress here….our friends in San Francisco (are trying) to persuade Stanford to drop Fayez Sayeh from the faculty on the grounds that he is a paid propagandist rather than an objective academician." Efforts at other US schools were similar – pressure to fire Arab professors, replacing them with pro-Israeli ones.

"Prof. Arnold Toynbee was invited to spend about five months in this country….When (his) accusations first broke in the press, we (enlisted) major non-Zionist groups and evolved a common policy (to):

(1) Discourage all Jewish (organizations) from issuing invitations to Toynbee;

(2) Monitor all (his) public appearances and refrain from bringing up the subject of Israel or the Jews unless Toynbee raises the subject in his presentation."

Overall, measures were taken to counteract his unfriendly Israeli positions, the same policy used against all critical public figures, strike back to discredit them. 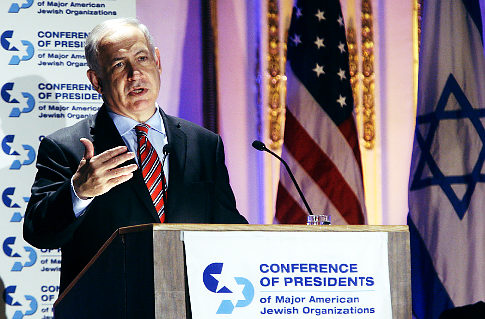 Calling the American Council for Judaism (ACJ) "the most effective anti-Zionist and anti-Israeli force on the American scene," efforts were made to give them "much more attention….than in the past."

Bribing major US publications and their writers helped do it, including at the Reader’s Digest, Atlantic Monthly, Look, Holiday, Parade, Saturday Review, the New York Times Magazine, and various women’s and business ones. Today, the entire US major media serve as Israel’s PR arm, its mouthpiece, the fruition of efforts begun 50 years ago.

Earlier, and of course now, TV shows were also arranged, and "We continue to counteract Arab speakers wherever they appear, by placing our own speakers on the same platforms…." In addition, "Mailings have gone out to public opinion molders dealing with current issues…."

In November 1961, the Atlantic Monthly was paid off to run a pro-Israeli "64-page Supplement, (featuring) some of Israel’s top names." Earlier in September, the Atlantic ran a "20-page article on "The Arabs of Palestine" which is "one of the best (we’ve seen done) on the subject." Jack Anderson also did a friendly piece for Parade Publications after returning from Israel.

In addition, AZC officials arranged speaking engagements for pro-Israeli figures throughout the country. Their mission – counteract "anti-Israeli propaganda….a careful check of newspapers, bulletins and confidential sources of our own (can) give us reliable information on the movements and itineraries of these propagandists." Community contacts were then alerted to furnish speakers to discredit them.

AZC’s Research Bureau also analyzed books and articles on Israel. "When a book is favorable, it is recommended. When (it’s not), it is analyzed and distortions are pointed up by providing the factual data required, so that our local Councils will be prepared to react….Further, we (arrange) book presentations (in) community and university libraries…."

Written for the AZC, Marc Siegel’s play, "A Message from Dimona" was described by The New York Times as a "story of a new city in the Israeli desert," suppressing the reactor’s bomb-making purpose, Israel’s open secret, well known, but not discussed.

"The nuclear reactor story inspired (other) editorial writers, columnists, science writers and cartoonists. Most of (them) accept(ed) the thesis that the reactor was being built for peaceful purposes and not for bombs….Drew Pearson’s syndicated column justified Israel’s secrecy; (science writer) William Laurence in the New York Times stressed Israel’s peaceful intent."

In 1945, the same William Laurence led a double life as both Times science writer and shill on the War Department’s payroll. Writing press releases for the Manhattan Project, he mislead the public, sold the program, lied about Alamorgordo, NM tests and the Hiroshima/Nagasaki horrors. He also denied what historian/attorney Jonathan M. Weisgall later called the "silent nuclear terror of radioactivity and radiation" – that it condemns exposed people to a slow, painful death, but it benefitted Laurence.

He won a Pulitzer Prize for his lying, and got to fly on the plane that bombed Nagasaki, later describing the experience in The Times with religious awe. Today, the entire US major media cheerlead for Israel, even its most unjustifiable, unconscionable, criminal acts. Entirely suppressed is its history of international law violations, including:

— a violence doctrine over peace;

— crimes of war and against humanity;

— denial of the most fundamental human rights and civil liberties; and

— an overall Kafkaesque "matrix of control" designed to crush Palestinians’ will to resist.

In the old days, journalists were bought off to ignore them. They now do it willingly and reflexively, knowing the consequences otherwise, the Israeli Lobby’s power to remove unfriendly voices – from Congress, academia and the media.

Demanded is that Israel be portrayed as peaceful, never aggressive, surrounded, beleaguered, and victimized, acting solely in self-defense. In contrast, Palestinians are called militant terrorist threats to Israeli security, its propaganda machine relentless in pounding that message, the Senate’s investigation failing to expose and halt it.

As a result, it’s more virulent and pervasive than ever, what no congressional committee will touch, what no major media report will reveal. Israel’s power in America suppresses everything unfavorable, willing fourth estate stooges going along, or else.

It’s why Project Censored warns about a "truth emergency," the urgency for media reform, and need for a cadre to do what all responsible journalists should – their job, what’s sorely absent in America, especially in reports about Israel.

– Stephen Lendman lives in Chicago and can be reached at lendmanstephen@sbcglobal.net. Also visit his blog site at sjlendman.blogspot.com. He contributed this article to PalestineChronicle.com.