Griffin is Professor of Philosophy of Religion and Theology, Emeritus, Claremont School of Theology and Claremont Graduate University, Claremont, CA where he’s still co-director of the Center for Process Studies.
He’s authored and/or edited three dozen books, mainly in his field, but notably and heroically on 9/11 truth, Osama bin Laden, and his newest titled, Cognitive Infiltration: An Obama Appointee’s Plan to Undermine the 9/11 Conspiracy Theory.  More on it below. 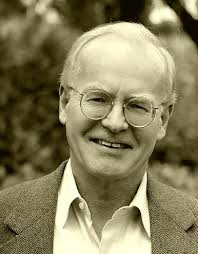 Cass Sunstein is a well-known University of Chicago and Harvard Law School Professor before being appointed Obama’s Administrator of the White House Office of Information and Regulatory Affairs, in charge of “overseeing policies relating to privacy, information quality, and statistical programs,” among other duties. 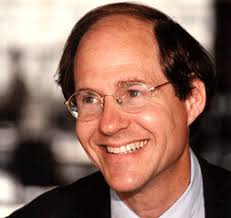 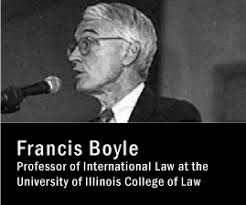 Boyle’s “Harvard’s Gitmo Kangaroo Law School: The School for Torturers” article advised:
“Do not send your children or students to Harvard Law School where they will grow up to become racist war criminals! Harvard Law School is a Neo-Con cesspool.”
“Harvard is to Law School as Torture is to Law.”
Commenting on Sunstein when he was mentioned as a possible Supreme Court nominee, Boyle, calling him a “Neo-Con,” said he’d be a “lethal” choice.

Professor Emeritus James Fetzer, Founder, Scholars for 9/11 Truth, took sharp issue with Sunstein’s attempt to discredit its proponents, saying his “Conspiracy Theories” report (discussed below) is a “corrosive approach” and “massive blunder” to believe they’re “obviously false!” In fact, “No one can know which theories are true or false without investigating them.” That a Harvard Law professor would suggest it “is simply stunning,” yet unsurprising given the source.
Fetzer’s article can be accessed through the following link:
http://www.opednews.com/articles/Birds-of-a-Feather-Subver-by-Jim-Fetzer-100121-980.html
Sunstein is a notorious neo-con, abhorrent of First Amendment and other democratic freedoms, believing the rule of law is best served by subverting it.
Glen Greenwald’s “The Horrible Prospect of Supreme Court Justice Cass Sunstein” article said:
“From the beginning of the War on Terror, Cass Sunstein turned himself into the most reliable Democratic cheerleader for Bush/Cheney radicalism and their assault on the Constitution and the rule of law.” He also supports military commissions, illegal surveillance, and “mock(ed) the notion that Bush had committed crimes while in office.”


One of his former students added: “I think (he’s) an extremely ambitious man (who’d) run over his grandmother for a seat on the Supreme Court.”
Apparently over the country as well, trashing it and the public interest for power, clearly the aim of his “Cognitive Infiltration” proposal.

…In January 2008, he and Adrian Vermeule published a controversial report titled, “Conspiracy Theories,” they define as “an attempt to explain an event or practice by reference to the machinations of powerful people, who have also managed to conceal their role.”
“Many millions of people hold (them); they believe that powerful people have worked together in order to withhold the truth about some important practice or some terrible event.”
Citing 9/11 truth, the reason for their report, they say believers “may create serious risks, including risks of violence….rais(ing) significant challenges for policy and law….The existence of both domestic and foreign conspiracy theories, we suggest, is no trivial matter, posing real risks to the government’s antiterrorism policies, whatever the latter may be.”
His solution – debunk and undermine them by “cognitive infiltration of extremist groups,” his modern-day version of COINTELPRO, the FBI’s infamous 1960s and 1970s counterintelligence program to neutralize political dissidents, including the American Indian Movement, Black Panthers, and communists, as well as anti-war, human and civil rights activists, among others.
Rebranded, COINTELPRO flourishes more than ever against new targets, including Muslims and others in the “war on terror;” environmental and animal rights activists, and supporters of democratic freedoms over despotism and imperial wars, among others.
Sunstein wants conspiracy advocates neutralized, using “independent groups to supply rebuttals, and by cognitive infiltration designed to break up the crippled epistemology of conspiracy-minded groups and informationally isolated social networks.” In other words, destroy them by conspiring against them from within, using illegal and extralegal tactics.
“Government agents (and their allies) might enter chat rooms, online social networks, or even real-space groups and attempt to undermine percolating conspiracy theories by raising doubts about their factual premises, causal logic or implications for political action.”
In June 2009, Sunstein and Vermeule updated their scheme in The Journal of Political Philosophy titled, “Conspiracy Theories: Causes and Cures.” The cause – psychological conditions. The cure – elimination by cognitive infiltration, including with “independent experts with information and perhaps prod(ding) from behind the scenes….(but not) too close (to avoid being) self-defeating” if exposed.

In fact, what Sunstein proposed is illegal under statutes prohibiting internal government propaganda, aimed at the public, though legal technicalities have never before been a deterrent.
Nonetheless, according to a March 21, 2005 Congressional Research Service report, the Government Accountability Office (GAO) defines “publicity or propaganda” as either official self-aggrandizing, partisan activity, or “covert propaganda,” the latter government-originated, disguised to appear otherwise, including by enlisted journalists, corrupting their profession by accepting cash to cooperate, a practice used by the Bush and earlier administrations as well as the CIA and perhaps FBI.
Griffin’s New Book – A Powerful Truth Antidote
His new book is an invaluable analysis of Sunstein’s proposal to undermine democratic freedoms, airbrush truth, impose censorship, and criminalize individuals who challenge official versions of patent lies, specifically 9/11, the seminal one of our time.
Critics agree, including Professor Peter Phillips, President of the Media Freedom Foundation and Project Censored saying:
Griffin’s book should be “entitled ‘the Courage of David Ray Griffin’ (for) His continuing efforts to speak truth to power regarding issues” as vital as 9/11. Project Censored strongly recommends it at a time our democratic freedoms are at risk, including dissent, what Howard Zinn called “the highest form of patriotism.”

Professor Emeritus Peter Dale Scott called Griffin our “preeminent (9/11) expert….his research….consistently careful, thorough, and objective.” His new book provides “a patient, point-by-point and much needed refutation” of Sunstein’s dangerous proposal. “He relentlessly shows how (he’s) guilty of the very mentality he warns against: close-mindedness and refusal to debate. Those who seek to prevent 2010 from becoming 1984” must read this invaluable book.
Professor Emeritus Richard Falk said Griffin wrote “a devastating critique, (using) his formidable philosophical and theological skills.”
Cyril H. Wecht, past President, American Academy of Forensic Sciences and the American College of Legal Medicine called the book “brilliantly written….a scholarly dissection of (Sunstein’s) sociopolitical proposal….,” one essential to expose and oppose.
Discussing Sunstein’s 10 theses, Griffin deconstructs their flaws, contradictions, and dangers to a free society.  He also explains the legitimacy of 9/11 truth, and Sunstein’s inability to refute it by disinformation, lies, suppression of facts, stifling debate, and attacking proponents.
What Obama did on September 23, calling Iranian President Mahmoud Ahmadinejad’s 9/11 truth comments to UN General Assembly:
“hateful (and) inexcusable, particularly for him to make the statement here in Manhattan, just a little north of Ground Zero, where families lost their loved ones, people of all faiths, all ethnicities who see this as the seminal tragedy of this generation….”
Others attacked the comments as “abhorrent and delusional,” no matter that millions around the world share them (including Architects and Engineers for 9/11 Truth), calling the event a crime, debunking the official account as deceitful, untrue, and destructive to democratic freedoms.
Ahmadinejad, in fact, suggested “three (possible) viewpoints:”
1. “That a very powerful and complex terrorist group” successfully circumvented US intelligence, Washington’s position.
2. “That some segments within the US government orchestrated the attack to reverse the declining American economy and its grips on the Middle East in order to save the Zionist regime.”
He said most Americans “as well as other nations and politicians agree with this view.” European polls suggest it. US polls vary and have largely ducked the issue by not asking precise questions.
3. “It was carried out by a terrorist group but the American government supported and took advantage of the situation.”
Ahmadinejad “proposed that the United Nations set up an independent fact-finding group….” He also criticized Washington for using the attack as a pretext for war against Iraq and Afghanistan. These views are verboten in the West, those expressing them pilloried as unpatriotic or worse.
Griffin is the preeminent 9/11 truth proponent and consummate scholar. Using his masterful skills, he demolishes Sunstein’s arguments, ones based on disinformation, deceit, and bad analysis, not up to the standards of an accomplished liar, and no match for Griffin.
Thomas Fletcher summed it up saying:
Griffin’s book “is a lucid and compelling exposure of the contempt held by the official (9/11 myth) defenders for dissenters who have seen through their Big Lie.” They also fear truth that reveals their ugly agenda. “These officials expect that no one will be able to penetrate the murk of Sunstein’s latest defense of the pretext for the US wars of aggression in Afghanistan and Iraq, now covertly expanding” globally. Truth is a powerful disinfectant, what government conspiracists most fear.
Some Final Comments
On September 12, Professor Denis Rancourt titled an article, “Why we love to hate conspiracy theories: 911 Truth as threat to the intelligentsia,” saying:
Many on the left share guilt with the right by “vehemently attack(ing) and ridicul(ing) ‘conspiracy theories’ such as the present 911 Truth movement.”
Why, he asks? “Is that not the modus operandi of power? Is it so difficult to believe that (the 911 attack) was not orchestrated by….religious zealot(s)? Or that those who measurably benefitted” had everything to gain? “What ever happened to ‘war is a racket’ and ‘follow the money?’ “
At issue is that “power owns the media, (and) more importantly….our jobs” and lives in other respects. Even more important than truth is how it’s used – to “rebel, actually rebel and individually take back power over (our) lives.” Instead, too many of “the intelligentsia” protect themselves and “the system” by being “a visceral opponent of 911 Truth….in order for power to save face.”
Let others fight the good fight they may feel, but unless enough do, putting a lot on the line, wrong will prevail over right and squeeze harder for even more of what they want.
Perhaps the next “9/11” will be a mushroom-shaped cloud or other comparable state-sponsored “disaster,” again blamed on foreign adversaries as a pretext for more war. Why not, given America’s permanent war agenda, a topic addressed in an earlier article, accessed through the following link:
http://sjlendman.blogspot.com/2010/03/americas-permanent-war-agenda.html
Stephen Lendman lives in Chicago and can be reached at lendmanstephen@sbcglobal.net. Also visit his blog site at sjlendman.blogspot.com and listen to cutting-edge discussions with distinguished guests on the Progressive Radio News Hour on the Progressive Radio Network Thursdays at 10AM US Central time and Saturdays and Sundays at noon. All programs are archived for easy listening.
http://www.progressiveradionetwork.com/the-progressive-news-hour/.
Please follow and like us: