Breaking News
Jordan Sather, Buffalo Shooting – These Flags Won’t False Themselves!
Todd Gregory and Erik Gregory, The Thousand-Year Progressive Reich
Joachim Hagopian, Today’s Shifting Balance of Power, Elites’ Endgame Dystopian Nightmare: Its Winners and Losers
Democrats Silent as Republicans Rip Into Secret Royalty Checks to Fauci, Hundreds of NIH Scientists
John Massaro, More Proof that Israel Was Behind 9/11
16 May, 2022
Skip to content
The following article was written by a scientist who uses the pseudonym “Plague Puppy.” It should be read by anyone interested in what happened to the twin towers on Nine Eleven.  The writing is somewhat uneven.  Also, I do not fully accept all of his conclusions.  However, it shatters the “pancake theory,” i.e. the official explanation of why the towers collapsed.  For more information on why the pancake model is faulty look midway on this page.
Anomalous Dust Trails: Further Evidence for the Disintegration of Steel 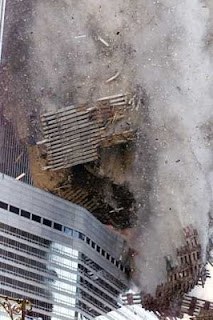 Pieces of WTC-2 falling onto WTC-3
The picture above shows a remarkable amount of very dense dust trailing behind large pieces, consisting mostly of portions of the outer walls of WTC-2, just as they are about to strike WTC-3.  These outer walls were made from 14″ square steel box columns tied together at each floor by 52″ wide steel spandrel plates, and can be seen falling in units several floors tall.  The piece on the lower right shows these spandrel plates clearly and gives an idea of size.
These same dense trails can be seen in many other stills and videos, and can be seen behind all the larger pieces as they fall.  Dust trails can be seen from early in the collapses when distinct pieces first emerge from the initial “mushroom cloud,”  and can be seen to maintain a fairly constant density for as long as they can be followed.  The pieces in the picture above fell from near the top of the 110 story tower, and are viewed about level with the top of the 22-story WTC-3, yet their dust trails are very similar to these pieces of WTC-1 seen much earlier in their fall.  The volume and density of these trails cannot be explained as the streaming away of dust that was somehow clinging to the columns of the outer walls at the moment of collapse, which would quickly dissipate as the pieces began to fall.  What we are seeing only makes sense if there is a continuing process of dust production as the pieces fall, something that flies in the face of our understanding of what can be accomplished with existing technology.
Start of WTC-1 collapse 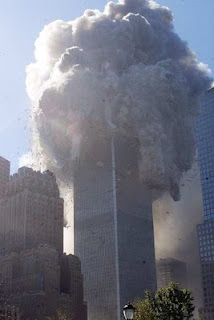 Notice the way the dust flows uniformly from the entire upper surfaces of the pieces, in places even tracing the outlines of individual columns.  The fact that the dust streams so exactly follow the contours of the wall fragments strongly implies that the dust is being generated from the steel columns themselves.  The only alternative would be for dust to have been pushed or pulled from elsewhere… But we do not see any sign of these pieces pushing dust ahead of themselves and releasing it as they fall: the leading surfaces of the pieces are quite clean where they are visible, and could not have carried the amount of material needed to create such long and dense trails.
Close-up of falling pieces

Ground level close-up of the south tower collapse by Bill Biggert showing thick dust trails and a shockwave-like shell of smaller fragments and pieces of aluminum cladding being thrown out horizontally.  The large piece at the bottom of the picture dramatically illustrates the disintegration process, with jets of material streaming away from each individual column.  Notice too that the pieces are beginning to look eroded, particularly the thinner piece in the middle, and have started to lose their sharp edges.

WTC-2 collapse viewed from north and west of WTC-1, close to the North Pedestrian Bridge on West Street.
This five second video clip shows the same view of the South Tower collapse as the top picture above, seen from a little further away.  It begins by looking up towards several large pieces of WTC-2 as they fall, and tracks them to the ground.  In fact the moment of impact is visible as the largest piece seen in the first picture above strikes, almost cutting the smaller building in half (as shown in the first picture here). The dust trails can be seen streaming out very energetically behind the pieces, carrying away a significant amount of material in the process.  Not only is this dust visually dense, it behaves like a dense fluid, falling only a little more slowly than the pieces themselves.  In fact the confluence of these dust trails became a pyroclastic cloud dense enough to chase people for blocks down surrounding streets, something that would only have been possible if the “dust” were a fairly coarse powder of a dense material.  (See here for more on pyroclastic clouds.)
View from the north of squibs and dust trails in WTC-1 collapse
This video of the WTC-1 collapse, with the top of WTC-7 visible in the foreground, shows good examples of dust trails behind large pieces that are being ejected to the left.  Distinct large pieces can first be seen as the collapse cloud reaches the top of the KTLA logo, and the dust trails continue without noticeable thinning as the pieces continue to fall. Two very large squibs are seen emerging from the right (west) side of the building ahead of the advancing collapse cloud.  These are very high-velocity jets, unusually well focussed even for demolition explosives, and probably represent large cutting charges on the core columns.  Smaller, more typical squibs can be seen in this detail from the WTC-7 collapse.  (More on WTC-7 here)
ABC News Footage of the South Tower Collapse
A bit blurry but unique footage seen from very close to the WTC-2 collapse.  Excellent examples of dust trails and very clear views of demolition waves.
WTC-1 collapse from the north, WTC-7 in foreground.
Dust trails, squibs. and a strange remnant of the building’s core
This view of the north tower collapse shows numerous large pieces trailing thick dust clouds.  Some of these pieces are also ejected large distances horizontally, especially on the right side where they seem to be thrown a greater distance.
A large squib can be seen on the north face of the building just as the collapse starts, with a narrower squib visible at the same time on the right (west) wall a little above the first.  As the dust cloud settles and drifts to the left the spire becomes visible, a portion of the core of the north tower that remained standing after the initial collapse.  Though not as clear here as in some other footage, there is also a bright glow that develops, mostly to the left of the tower, as the collapse progresses.
As difficult as it may be to accept the possibility of a controlled demolition with conventional explosives, we are faced here with the additional difficulty of a process that seems to defy the laws of physics.  But perhaps what we are seeing instead is a technology based on aspects of physics not generally known, but that exist as proven science for those privy to the world of black technology.  Given the tremendous funding for advanced weapons programs it is not unreasonable to think that whole new areas of physics may have been developed and exploited for weapons technology in the past few decades.  For example Tom Bearden describes scalar electromagnetic weapons based on the work of Nicola Tesla that could be used to remotely soften or disintegrate metal, and claims that such systems were actually deployed by the Soviets as early as the 1960s.
Some further information on Tesla and scalar weapons:
nikola tesla: man out of time by Katy Schiel.
TESLA DOOM WEAPONS & AUM SHINRIKYO  By David Guyatt.
####
Plaguepuppy’s Homepage

One thought on “Anomalous Dust Trails: Further Evidence for the Disintegration of Steel in the Twin Towers”