I write about major problems: the collapsing US economy, wars based on lies and deception, the police state based on “the war on terror” and other fabrications such as those orchestrated by corrupt police and prosecutors, who boost their performance reports by convicting the innocent, and so on. America is a very distressing place. The fact that so many Americans are taken in by the lies told by “their” government makes America all the more depressing.

Often, however, it is small annoyances that waste Americans’ time and drive up blood pressures. One of the worst things that ever happened to Americans was the breakup of the AT&T telephone monopoly. As Assistant Secretary of the US Treasury in 1981, if 150 percent of my time and energy had not been required to cure stagflation in the face of opposition from Wall Street and Fed Chairman Paul Volcker, I might have been able to prevent the destruction of the best communications service in the world, and one that was very inexpensive to customers.

The assistant attorney general in charge of the “anti-trust case” against AT&T called me to ask if Treasury had an interest in how the case was resolved. I went to Treasury Secretary Don Regan and told him that although my conservative and libertarian friends thought that the breakup of At&T was a great idea, their opinion was based entirely in ideology and that the practical effect would not be good for widows and orphans who had a blue chip stock to see them through life or for communications customers as deregulated communications would give the multiple communications corporations different interests than those of the customers. Under the regulated regime, AT&T was allowed a reasonable rate of return on its investment, and to stay out of trouble with regulators AT&T provided excellent and inexpensive service.

Secretary Regan reminded me of my memo to him detailing that Treasury was going to have a hard time getting President Reagan’s economic program, directed at curing the stagflation that had wrecked President Carter’s presidency, out of the Reagan administration. The budget director, David Stockman, and his chief economist, Larry Kudlow, had lined up against it following the wishes of Wall Street, and the White House Chief of Staff James Baker and his deputy Richard Darman were representatives of VP George H.W. Bush and did not want s substantial Reagan success that would again threaten the Republican Establishment’s hold over the party. Baker and Darman wanted to be sure that George H. W. Bush, and not Jack Kemp, succeeded Ronald Reagan, and that required a muted Reagan success that they could claim as theirs for moderating an “extremist” program.

I told Secretary Regan that if I had another deputy assistant secretary, I could reach a reasonable conclusion whether the breakup of AT&T was sensible. He replied that he was sure that was the case, but that once I had three deputies the headlines in the Washington Post and New York Times, Business Week, Newsweek, and so on, would be: “Supply-sider builds empire at Treasury.” He said it would sink me and that without me he could not get the President’s economic program out of the President’s administration. “Which do you want to do,” he asked, “save AT&T or cure stagflation?”

Curing stagflation gave America twenty more years. Ironically, the good times started to erode when Reagan’s other goal was accomplished and the Soviet Union dissolved in 1990. “The end of history” resulted in India and China opening their labor markets to American capitalists, who began producing offshore with foreign labor the products that they sold to Americans. The labor costs savings pushed up corporate profits, shareholders’ returns, and managerial bonuses. But it deprived Americans of middle class incomes and wrecked the balance of trade. The US income distribution and the trade deficit worsened. 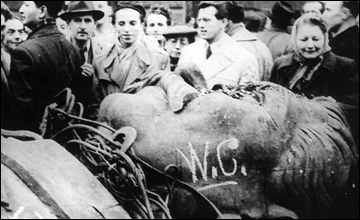 Many progressives blame the worsening income distribution on the Reagan tax rate reductions, but the real cause is the offshoring of manufacturing, industrial, and professional service jobs, such as software engineering.

None of us in the Reagan administration foresaw jobs offshoring as the consequence of Soviet collapse. We had no idea that by bringing down the Soviet Union we would be bringing down America. During the Reagan years India was socialist and would not allow foreign corporations, had they been interested, to touch their labor force. China was communist and no foreign capital could enter the country.

However, once the Soviet Union was gone from the earth, the remaining socialist and communist regimes decided to go with the winners. They opened to Western corporations and sucked jobs out of the developed West.

But this is a different story. To get back to deregulation, nothing has worked for the consumer since deregulation. Deregulation permitted corporations to impose their costs of operation on customers without having to send them a bill. For example, corporations use voice recognition technology to keep customers from salaried customer representatives. I remember when a customer with a problem could call a utility company or bank and have the problem immediately corrected. 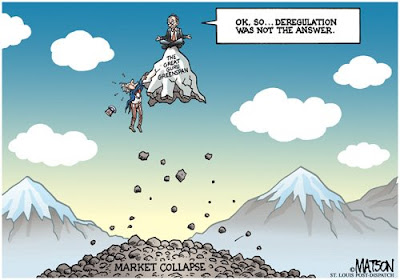 No more. There was an error in my phone bill today, which I had corrected without result on two previous occasions. As everyone knows by now, it takes 10-15 minutes, usually, to get a live person who can actually fix the problem. After listening to sales pitches for 12 minutes, I got a live person. Once the problem was understood, it was pronounced to be an upper level problem out of his hands. I waited another 10 minutes while he tried to reach a superior who had the code to fix the problem that the phone company had produced in my account. The entire time I listened to product advertisements.

How many times has this happened to you?

Whoever invented these artificial voice capabilities is the enemy of mankind. Whomever a customer calls–utilities, credit card companies, banks, whatever, the customer gets a voice machine. Some voice machines never tell the customer how to get a live person who can, on occasion, actually fix the problem.

In my opinion, the strategy behind the endless delays is to cause the customers to give up, slam the telephone down and play the higher incorrect bill as it is cheaper in time and frustration to correcting the problem and being billed in the correct amount. These ripoffs of the customer are produced by Wall Street pressures for higher earnings.

The frustrations, of course, multiply when one reaches an offshored service somewhere in the Third World. The incentive is to hang up and to pay the excessive bill so that phone, internet, or credit card services are not cut off.

Had Don Regan and I known that the high speed Internet was in our future and that American corporations would use it to destroy the jobs traditionally filled by US university graduates, possibly we would have decided to save the regulated telephone monopoly and to deliver the economy over to stagflation.

I regret that I did not have a crystal ball.

Deregulation proponents will say that the breakup of AT&T gave us cell phones and broadband, as if foreign regulated communication companies and state monopolies do not provide cell phone service or high speed Internet connections. I can remember attending corporate board meetings years ago at which the European members had digital cell phones with which they could call most anywhere on earth, while we Americans with our analogue cell phones could hardly connect down the street.

What deregulation did was to permit Wall Street to push the deregulated industries– phone service, airlines, trucking, and later Wall Street itself– to focus on profits and not on service. Profits were increased by curtailing service, by pushing up prices and by Wall Street creating fraudulent financial instruments, which the banksters used America’s reputation to market to the gullible at home and abroad.

Consider air travel. Admit it, if you are my age you hate it. The deterioration in service over my lifetime is phenomenal. Studies in favor of airline deregulation focused on short flights between A and B and concluded that small airlines serving high density areas were more efficient because they were not regulated. What was left out of the analysis is that regulated airlines served low density areas and permitted free stopovers. For example, if one was flying from the US to Athens, Greece, the traveler could stopover in London, Paris, and Rome without additional charges. Moreover, passengers were fed hot meals even in tourist class. In those halcyon days, it was even possible to travel more comfortably in tourist class than in first class, because flights were not scheduled in keeping with full capacity. Several rows of seats might be unoccupied. It was possible to push up the arm rests on three or four center aisle seats, lay down and go to sleep.

Perhaps the best benefit of regulated air travel for passengers was that airlines had spare airliners. If one airplane had mechanical problems that could not be fixed within a reasonable time, a standby airliner was rolled out to enable passengers to meet their connections and designations. With deregulation, customer service is not important. The bottom line has eliminated spare airliners.

With deregulated airlines, Wall Street calls the tune. If your flight has a mechanical problem, you are stuck where you are unless you have some sort of privileged status that can bump passengers from later fully booked flights. “Studies” that focus only on discounted ticket price omit major costs of deregulation and thereby wrongly conclude that deregulation has benefited the consumer. 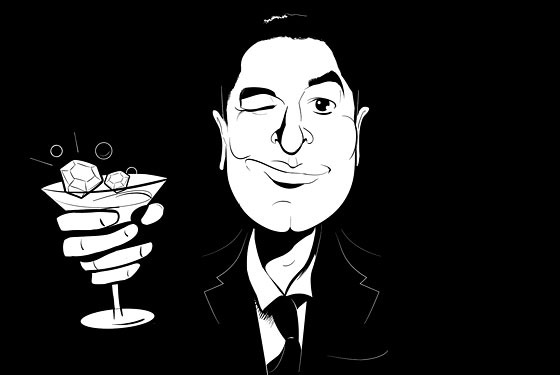 When trucking was regulated, truckers would stop to provide roadside assistant to stranded travelers. Today, with deregulated trucking, every minute counts toward the bottom line. Not only do truckers no longer stop to aid stranded travelers, they travel at excessive speeds that endanger automobile drivers. Trucks have expanded in size, weight and speed. Trucks raise the stress level on interstate highway drivers and destroy, at taxpayers expense, the roads on which they travel.

Conservatives and especially libertarians romanticize “free market unregulated capitalism.” They regard it as the best of all economic orders. However, with deregulated capitalism, every decision is a bottom-line decision that screws everyone except the shareholders and management.

In America today there is no longer a connection between profits and the welfare of the people. Unregulated greed has destroyed the capitalist system, which now distributes excessive rewards to the few at the expense of the many.

If Marx and Lenin were alive today, the extraordinary greed with which Wall Street has infected capitalism would provide Marx and Lenin with a better case than they had in the 19th and early 20th centuries.

The War On Terror

One thought on ““Unregulated Greed has Destroyed the Capitalist System”: The Big Things That Matter And The Little Things That Annoy”