Breaking News
Judicial Watch, Most of Facebook Censorship Board Has Ties to Leftwing Billionaire George Soros
Alex Scott, Have “The Powers that Be” Just Staged a  False Flag to Foment a Race War across America?
Michael Snyder, A Lot More Rioting, Looting and Civil Unrest as the U.S. Economy Continues to Crumble
Robert David Steele, Has Wall Street Stolen $100 Trillion from the American Public? Will Donald Trump Get It Back?
Brandon Smith, The Economic “Reopening” is a Fake Out
02 Jun, 2020
Skip to content 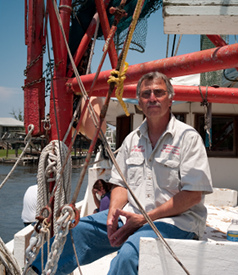 George Barisich has been a fisherman in New Orleans for over 40 years. Some experts are concerned that toxic chemicals being used to help clean up the oil spill in the Gulf are seriously endangering the health of those living near the water.
When Louisiana residents ask marine toxicologist and community activist Riki Ott what she would do if she lived in the Gulf with children, she tells them she would leave immediately. “It’s that bad. We need to start talking about who’s going to pay for evacuations.”

In 1989, Ott, who lives in Cordova, Alaska, experienced firsthand the devastating effects of the Exxon Valdex oil disaster. For the past two months, she’s been traveling back and forth between Louisiana and Florida to gather information about what’s really happening and share the lessons she learned about long-term illnesses and deaths of cleanup workers and residents. In late May, she began meeting people in the Gulf with symptoms like headaches, dizziness, sore throats, burning eyes, rashes and blisters that are so deep, they’re leaving scars. People are asking, “What’s happening to me?”

She says the culprit is almost two million gallons of Corexit, the dispersant BP is using to break up and hide the oil below the ocean’s surface. “It’s an industrial solvent. It’s a degreaser. It’s chewing up boat engines off-shore. It’s chewing up dive gear on-shore. Of course it’s chewing up people’s skin. The doctors are saying the solvents are making the oil worse.”

In a widely watched YouTube video, from Project Gulf Impact, a project that aims to give Gulf residents a voice, Chris Pincetich, a marine biologist and campaigner with the Sea Turtle Restoration Project, said Coast Guard planes are flying overhead at night spraying Corexit on the water and on land.

Ott says people who are experiencing discomfort of any kind, especially children, pregnant women, cancer survivors, asthma sufferers and African-Americans because they’re prone to sickle cell anemia, should wear a respirator and see a doctor that specializes in chemical poisoning immediately. She also recommends contacting the detox specialists at The Environmental Health Center in Dallas, Texas. “People don’t have the information to know that the burning sore throat is actually chemical poisoning,” she said. “And this isn’t getting any attention, but it’s very important. There are no vaccinations for chemical poisoning. None.”

Because she’s gotten to know the locals and has done a number of national media interviews, she’s now receiving a barrage of daily phone calls and emails from people who are concerned and don’t know where else to turn. She recommends they read this Sciencecorps resource about potential health hazards.

In the video above, author and journalist Summer Burke talks about her experience being sprayed with the toxic dispersant Corexit.

Ott shared these stories on a recent trip to the Bay Area with Diane Wilson, former Texas shrimper turned rabble-rousing activist. Ott was coughing and constantly clearing her throat during our two-hour conversation. “I can still smell the oil,” she said.

Media outlets have been reporting on public health concerns and taking water quality samples, but Ott says they’ve only scratched the surface. “If I were in charge of the media, I would be talking be about public safety and public health every day. They should also be exposing the truth about how our federal standards are outdated and no longer protective of public health or worker safety. We knew in 1989 that OSHA had a loophole in it that’s big enough to drive every single sick worker through. It exempts the reporting of colds and flus. That loophole has not been closed since Exxon Valdez.”

Ott expressed her concerns during a May meeting with Environmental Protection Agency (EPA) administrator Lisa Jackson. “I was sitting across from her. She said, quote, ‘I am walking a fine line between truth and hysteria. We don’t want to create a panic.’ This shows you how much our government is beholden to oil and cannot imagine a future without oil. We the people have got to imagine this. We have to. This is way worse than people think.”

On Tuesday, Mother Jones’ Kate Sheppard reported that Hugh Kaufman, a whistleblower who works as a senior policy analyst in the EPA’s Office of Solid Waste and Emergency Response, is accusing the agency of deliberately downplaying public health threats and its own role in regulating the chemicals being dumped into the Gulf “to protect itself from liability and keep the public from getting too alarmed.”

The cause for alarm can’t be more apparent. In addition to the health problems people are already experiencing, WKRG News 5 reporter Jessica Taloney recently collected samples of water and sand from five Alabama beaches and took them to a local lab to be tested.

Bob Naman, a chemist with nearly 30 years of experience, told Taloney that he wouldn’t expect to see more than five parts per million of oil and petroleum in the water. The sample of the water taken in Gulf Shores beach, where adults and kids were swimming and playing, showed 66 parts per million. The sand had 211 parts per million. When Naman began to test the sample collected from Dauphin Island Marina, it exploded. “We think that it mostly likely happened due to the presence of methanol or methane gas or the presence of the dispersant, Corexit.”

“What’s going on in the Gulf is the same cover-up that was going with the 9/11 environmental issue,” the EPA’s Kaufman told Sheppard. “The Bush White House ordered EPA to lie about the environmental and public health situation at the World Trade Center because of economic ramifications. So they did.”

On Democracy Now!, Kaufman accused the EPA of being “sock puppets for BP in this cover-up.”

I called Kaufman to find out if he agrees with Ott’s decision to sound the alarm about evacuations. The short answer? Yes. “If you’re getting sick, it’s because you’re being poisoned,” he said. “Those chemicals can cause cancer 20 years down the line and that’s why Riki Ott is saying some areas have to be evacuated. That’s true. We don’t know how bad it is because the EPA is not doing adequate air testing. They’re taking some measurements so they can tell the public that everything is safe [when in fact the public has] an increased risk of getting cancer and dying early. They’re pawns in a money game.”

Kaufman and Ott both say the media need to follow the money. The reason why the EPA is covering this up, they say, is because the cost to BP would be astronomical. “The dispersants hide the oil,” said Ott. “If you put dispersants in the water, you don’t know how much oil was really spilled. Oil fines are based on how much oil was spilled, so it’s all about money.”

If a group listed as a terrorist organization had caused the oil disaster, Kaufman says their assets would be seized immediately and their members would be arrested. So, why hasn’t the US government seized BP’s assets? Kaufman points to an April Vanity Fair article about Larry Fink, one of the most powerful men on Wall Street. Fink’s BlackRock money-management firm controls or monitors more than $12 trillion worldwide, including a billion shares of BP. According to the article, BlackRock “has effectively become the leading manager of Washington’s bailout of Wall Street,” thanks to Fink’s close relationship with former Treasury Secretary Henry Paulson and Treasury Secretary Timothy Geithner.

The “psychologically astute” Larry Fink, photographed at BlackRock headquarters in February.
“It’s all about money,” says Kaufman. “Follow the money.”

Ott says she plans to stay in the area to assist where she can (getting respirators for workers is near the top of her list), get the truth out and continue the conversations and community meetings she’s having with self-described Tea Partiers, evangelicals and fifth and sixth generation fisherman. “Here’s something positive for you,” she said. “I’m starting to hear, ‘We all live on one planet and there really is a climate crisis here. This can’t continue.’ I’m having conversations with the Christian Right. I’m staying in an oilman’s camper. Oilmen are starting to see that we need alternatives. I’m having tea party people come up to me and say, ‘How can I help?’ Corporations want to divide the nation into red and blue, Democrat and Republican. I’m seeing that crashing down. The frames are dissolving. The South is rising. I’m talking about the Deep South. This is the most hopeful sign I’m seeing.”

Former shrimper Diane Wilson hopes to see more direct action. “This is a crisis. If this oil gusher does not move people to force a change in Washington, then it will never happen. We are seeing the end of the United States as we know it. If people hold their planet dear, they better be out there. Folks are too well behaved. We need to be unreasonable.”
Please follow and like us: